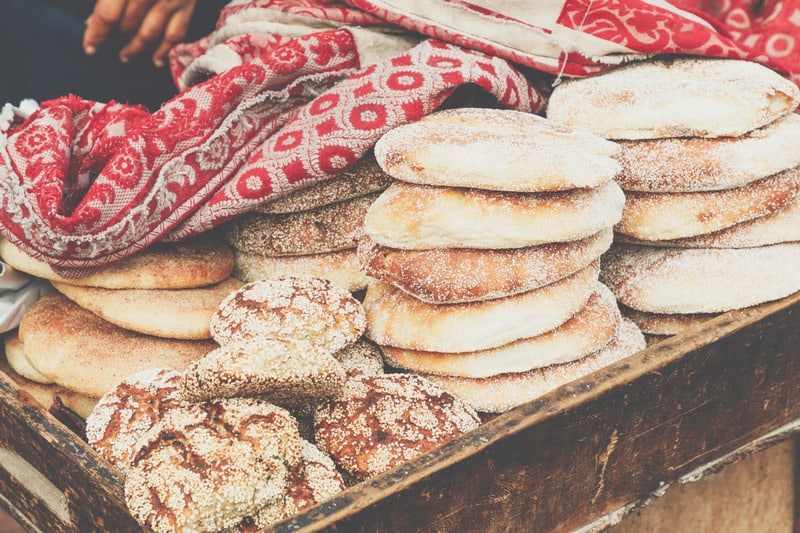 I have always had an obsession with bread and over the years exploring the numerous types of breads that exist in Morocco has been a fascinating thing.

While most people think of couscous or tajine as defining the Moroccan diet, I’d argue bread is what defines it. Unlike in much of the Middle Eastern world, rice barely plays a role in traditional Moroccan cooking. Flour was the carbohydrate of choice and there are dozens of ways it is used.

What kind of bread is eaten in Morocco?

What kind of bread isn’t eaten in Morocco may be a better question. There are at least a dozen different types of breads that are made in Morocco and as I’m learning daily there are probably a dozen more yet to hear of.

Breads made with wheat flour are most common – and it’s almost always semi-leavened. You won’t find large puffy boules like in France. Nor would Moroccans eat with sandwich bread. Bread is solid and has a crust. Many Moroccans don’t eat the inside of the bread, and prefer the outside only.

The most widely eaten is the round semi-flat loaves of bread often called just khobz. This can be made with white, wheat or a mixture of flours. Traditionally large rounds were made and brought to the community bakery however today many people bake their bread at home.

While round khobz loaves are most common on a day to day basis there are also other kinds of bread that are eaten for different times of day or occasions. Flat, laminated breads like msemmen for breakfast or snacks. Stuffed breads for a more filling dish.

Regionally there are variations in how breads are baked. In the High Atlas you might find it cooked on the side of a clay oven like tandoori bread. While in the Dades Valley it’s baked on a small elevated tray inside a clay over with a small wood fire to cook the dough.

Why is Bread Important in Morocco?

Bread was the main food that sustained people in times of struggle. Even today you may not be able to afford much but most people can always afford a loaf of bread (a small round loaf costs $0.10-$0.20). It also was a way to make food go further.

Bread and mrqa (sauce) are the major components of tajine, the primary dish for many Moroccans. While visitors are often presented with more decadent dishes, the average Moroccan fills themselves with bread and the sauce of the tajine and then the vegetables and meat will be as an extra. What we might consider to be a serving for 2 people could likely feed many more.

Bread is so important in Morocco that you never throw it away. A separate bag is kept for bread and garbage, the bread is put in the bag and then it’s fed to animals. It’s considered sinful to mix it with garbage.

Bread also isn’t eaten as a side to the meal – it’s integral to the meal itself. Moroccans use bread as a utensil to scoop up the food. It’s always interesting to see non-Moroccans eat tajines with a fork and knife, it just doesn’t seem right somehow!

There’s multiple Moroccan proverbs about bread but one of the most telling is “Manage with bread and salted butter until God brings something to eat with it.”

How to Make Moroccan Bread

Moroccan bread is made of very simple ingredients; flour, salt, yeast, and water. Sometimes sugar is added. Sometimes there are other spices mixed in or stuffed inside the bread.

The variety in breads come from different cooking techniques as well as different folding techniques. Certain breads are more common in various regions across the country.

Some people might call this tagine bread. It’s the most typical bread you’ll see on a Moroccan table. Always round, aways brown and those dots on top are for the baking process. This bread was normally made in community ovens but today it’s often made at home.

While not quite the same as bread made with wheat flour. This gluten-free Moroccan bread is pretty close to the real deal. As with most gluten free breads it requires less kneading and has a bit of a different texture when baked.

If you don’t have access to an oven then this Moroccan stovetop bread is the next best thing. The resting time of this bread is important. It is what helps create the fluffy pockets.

Combining batbout, stovetop bread with laminated msemmen bread, this is a delicious bread for tea time. With just a little bit of practice you will be turning these out in a flash.

Made for breakfast or afternoon teatime, msemmen is a favorite in Morocco. It isn’t the easiest bread to make but once you get a hang of folding the layers you’re on your way. It can be served many different ways such as with honey and butter.

A slightly different variation on regular msemmen, these are a type of Moroccan stuffed bread with ground beef and spices to create a savory snack. They’re popular in the afternoons.

Made for the holiday of Mimouna this bread is similar to msemmen but made slightly differently. It’s easier to make thanks to it’s single layers and retains a more chewy texture than msemmen.

Harcha is a type of stovetop bread that is similar to American cornbread (but also very different). The traditional recipe is made by mixing corn and wheat flour together but in this version of the recipe it’s completely gluten free.

This stuffed bread originates in the Sahara areas of Morocco and is sometimes called Berber pizza thanks to its filling. Ground beef, onions and spices are sandwiched in the bread before cooking to create a tasty treat.

Moroccan pancakes are only cooked on one side which is what gives them this look of a lot of holes on the top with a smooth bottom. They’re almost always eaten drizzled with melted butter and honey but you can choose whatever you’d like to mix and match.

Tigrifine is a flatbread that is made similar to pizza crust or tortillas. It’s baked on the stovetop vs. in the oven and is a very quick type of bread to make.

Unless you’re planning to bake bread in the desert a recipe won’t help but if you’re interested in how bread is baked IN the sand than this post will certainly be of interest!

Bread Baking in the Dades Valley

In the Dades Valley of Morocco bread is made in a small oven using twigs for the fire. It’s a process that is tricky as you need to consistently turn the dough to make sure it cooks but doesn’t burn.

Tafernout is by far my favorite type of Moroccan bread. It’s cooked by slapping the dough on the sides of a hot clay oven – a lot like tandoori bread. But you need the special oven to make it work. A must try in Morocco!