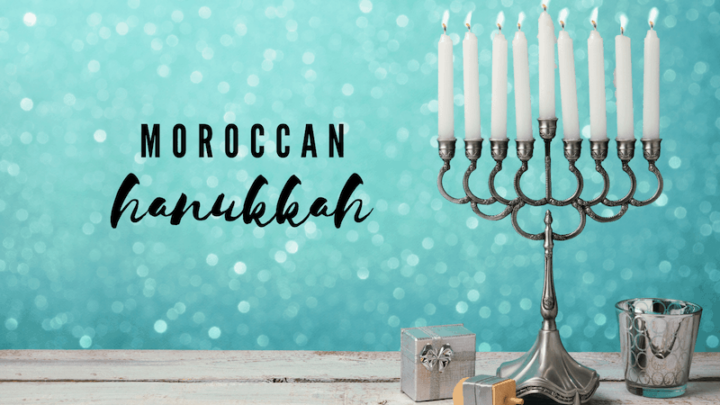 I have always been interested in Moroccan Jewish holidays and traditions.  So it was interesting for me to discover recently that I in fact do have Jewish ancestry. We don’t celebrate Hanukkah, but Morocco has a long history with Judaism.

The history of Judaism in Morocco dates back over 2,000 years to Berber Jews in the Atlas mountains.  It’s interesting to note that these early Moroccan Jews are not genetically Jews, rather they likely became Jewish as they had contact with others.  Alternately there were two waves of who emigrated to Morocco.

The first group migrated after the destruction of the Second Temple and the final wave from Spain in 1492 after the Alhambra Decree. Until the late 1940’s, at least 10% of Morocco’s population was Jewish – over 250,000 people.  Today there are fewer than 5,000 Jews living in Morocco.  The majority of the population left for Israel in the late 1940’s.  Today small pockets can be found in Casablanca and Fes.

I decided to do this Hanukkah series after learning that Daniel Saraga of Haggis and Herring had passed away in September of 2012. Daniel was a frequent reader and often emailed me with comments, family anecdotes and thoughts on recipes. He was a Canadian/Moroccan Jew and shared so much with me about his family and their experiences in Morocco and Israel. I always looked forward to his comments and learning more.

After I learned of his death I wanted to do something to honor him.  But, at the time there wasn’t anything. Instead I decided to wait until Hanukkah, the festival of the lights, and dedicate all of these posts to his life and memory.

Moroccan Jewish Hanukkah food is nearly identical to traditional Moroccan food, though must also be kosher.  Interestingly enough the majority of Moroccan recipes are kosher without needing any alternations.  Meat and dairy are rarely, if ever mixed.

It’s interesting to note that the foods and traditions of Ashkenazi (European) Jews and Sephardic (Middle Eastern) Jews are different. I’m not a Jewish scholar or expert on the subject but found this resource interesting and useful to understand the differences.

You likely won’t find a latke on a Moroccan Jewish Hanukkah table (but you may find ma’akouda). Mofleta’s are common and in many ways resemble msemmen. Sfinge are also an important part of the holiday.

Couscous, dafina, tagines, and briouats (or pastellitos) are all potential meals for the week.  It’s extremely difficult to find recipes that are Moroccan Jewish.  When MarocBaba and I asked my mother in law to get ideas she drew a blank.

We asked another, older, friend of the family if she had any idea, specifically about dafina.  She started but couldn’t remember.  I was afraid the project was going to be lost.  Just recently I received the cookbook Grandma Elmaleh’s Moroccan Cookbook.  It’s all Moroccan Jewish recipes!  I’ve used it as a guide to write some of these recipe posts.

My hope is to do justice to some of these foods, of which I’ve had limited exposure too.  This blog celebrates multiple cultures and I think it’s important to recognize everyone.  Here’s what you’ll see in the coming week {links updated}; 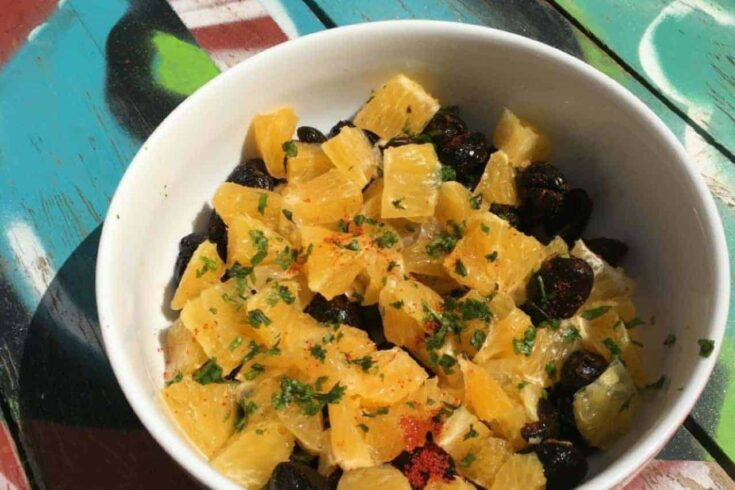 A bright salad that uses Moroccan winter produce like fresh oranges to add a great flavor to the table. 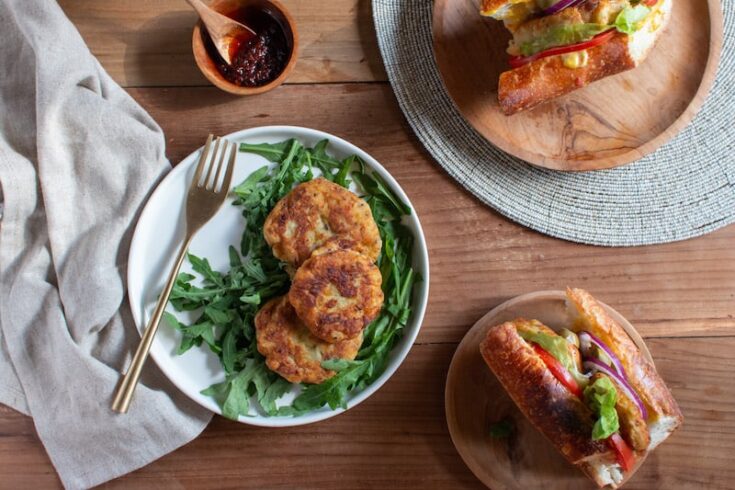 The Moroccan take on a latke? Maybe! Eat these alone, with a salad or stuffed in a sandwich. 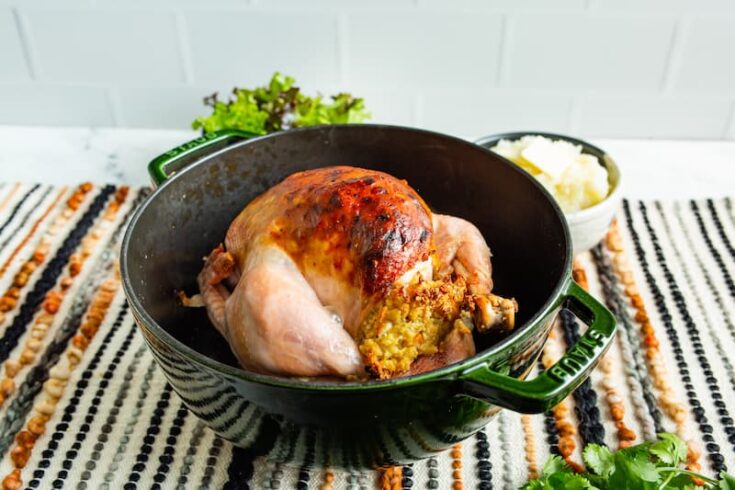 Make use of matzo more than just at passover in this stuffing - or skip it and use crackers instead.

This is a very traditional Moroccan Jewish recipe often made for the sabbath on Saturday's.

A simple cookie made with sesame seeds and honey. 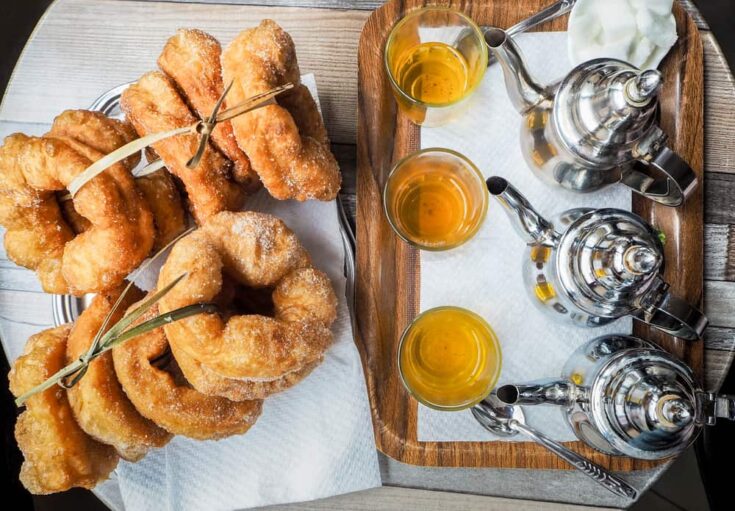 Is there anything better than fried dough? Fried dough rolled in sugar! 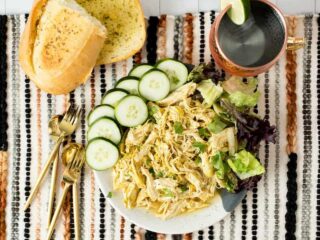 Dear Moroc Mama, I am Jewish and I just wanted to point out a couple of things. First, no shell fish is considered kosher, not shrimp, not any. Also, charoset would never be consumed for chanukah because it has very very specific symbolic significance to the Passover story. You are correct about sfenj and even mofletta, and also b'stila and pasteles or briouate. But the most important celebratory main dish for chanukah among Moroccan Jews is Couscous de Ceremoni. Basically it is sefa of couscous and it is topped with t'faya and decorated with cinnamon and powdered sugar and almonds. I enjoy your blog very much and as a Jewish person married to a Moroccan Muslim I appreciate your interest and your sharing of Jewish tradition in Morocco.

Yes you are absolutely right and now that I read it back (this was a very old post!) I feel awful! I had updated this post recently as I added a lot of new specific food posts where previously was using other recipes. I hope that the new version is showing now as it's more accurate and updated (what a difference 10 years makes!)

[…] Moroccan Hanukkah Traditions (with a recipe for Berkoush) […]

A great way to honour your friend Daniel and Jewish Moroccan recipes!

I’m curious and a little shocked about your comment that “early Moroccan Jews are not genetically Jews”. It sounds like you think Jewish people have different genes? There’s no such thing as A Jew Gene or a Jewish face/look.

Hi Shifra! Did you have any luck finding any Hanukkah celebrations in Morocco? I’m traveling to Marrakech, Agadir, and Essouria at the end of December and would love to meet up with some Moroccon Jews and celebrate. Let me know, I would really appreciate it!

I don’t I’m afraid. It’s hard to find information. There actually have been a lot of studies and work in genetics that look at genes to establish ethnic “Jewish genes” - I found out just recently I have Jewish heritage through genetic testing. This is just a quick example. http://m.jpost.com/Israel-News/Politics-And-Diplomacy/New-law-says-genetic-test-valid-for-determining-Jewish-status-in-some-cases-506584

Oh, the other thing..We had a book called " La cuisine Juive-Marocaine" Writers: Viviane Moryoussef/Nina Moryoussef which had authentic recipes. I was a teenager then (hmm, minimum 15 years back) . I know this book is still around in Morocco under different form (even better). I just can't tell if there is any English version of it..

Not sure if I can of any help. I'm Moroccan and I have a blog all about food..

My family is originally from Fes (where many Jews ended up after the Spanish decree of Isabel and Ferdinand) . . I did a bit of research in this subject and apparently mixing sweet and savoury in a dish would be a jewish thing...Hence the prunes and lamb tajine as well as other recipes..So while there are dishes which are definitely Moroccan, their origin might have been Jewish Moroccan..To confirm..

Sounds about right given Jewish folk have been in Morocco for two thousand or so years. It’s difficult to disentangle the Moroccan from the Jewish and the Jewish from the Moroccan when it’s such a long and rich history.