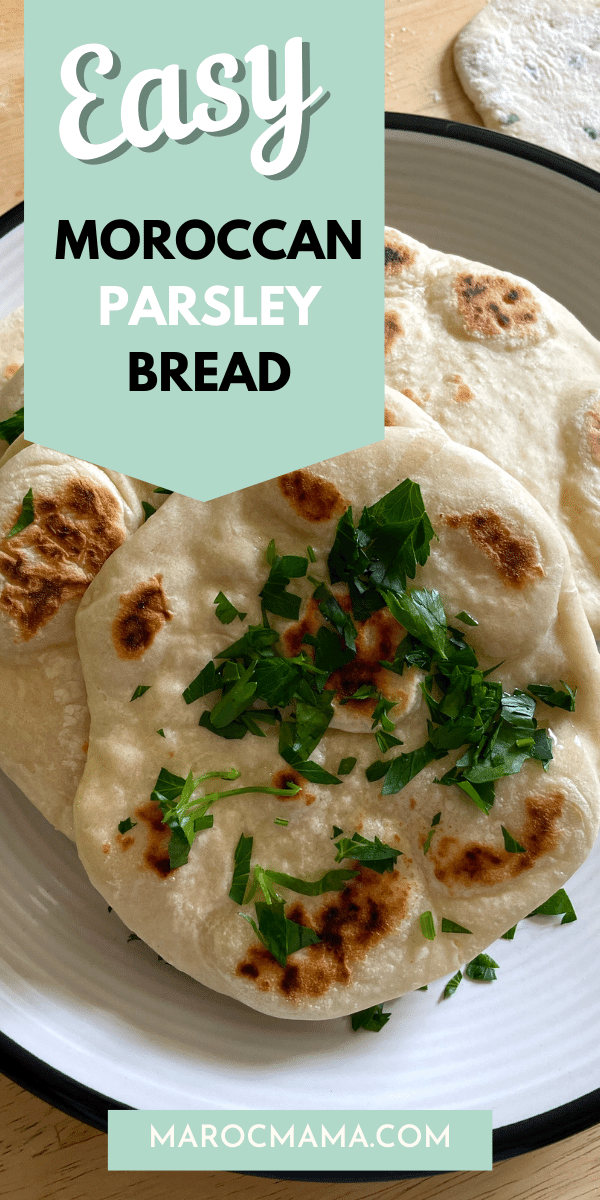 This Moroccan parsley bread, also known as batbout bread is a type of stovetop bread. The bread is made from a dough of flour, water, yeast and salt, and is then topped with fresh parsley. This isn’t a traditional Moroccan bread that is generally made in Morocco – the parsley is a new addition.

Batbout is a barely leavened flatbread that is popular in Morocco. This is cooked on a griddle or in a skillet. The bread is often eaten with Moroccan tajine, and can also be used as a wrap for Moroccan-style sandwiches.

While this recipe uses parsley, you could use any herb. Traditionally this is made plain, with no toppings. But, there’s no reason why you can’t play around and experiment with different toppings. The herbs do add a fresh element and make the bread have a different flavor and dimension.

How to Make Moroccan Bread

Moroccan bread is either baked in an oven or on a skillet or on a griddle. The dough is formed into a ball, then flattened into a disc. It is then cooked on both sides until it is golden brown. One of the keys to making this bread is that you need to let it rest long enough.

Letting the bread dough rest does a few things. It allows the flour to fully hydrate, which gives the bread a softer texture. It also allows the gluten to relax, making the dough easier to work with.

How to Make Parsley Bread

The base bread of this recipe is traditional Moroccan but with the addition of parsley it becomes something new!

For the yeast in this recipe, I listed a range. In the US yeast comes in a pre-measured packet that is 3/4 Tbsp, this is fine! If you're using loose, dry yeast a bit more will not affect the bread negatively.

The cooking time also will vary as it will depend how many breads you are cooking at once, the temperature you're cooking at etc.

If you enjoyed this recipe, there are several other types of stovetop breads you can make. These are great if you don’t have an oven or simply don’t want to turn it on!