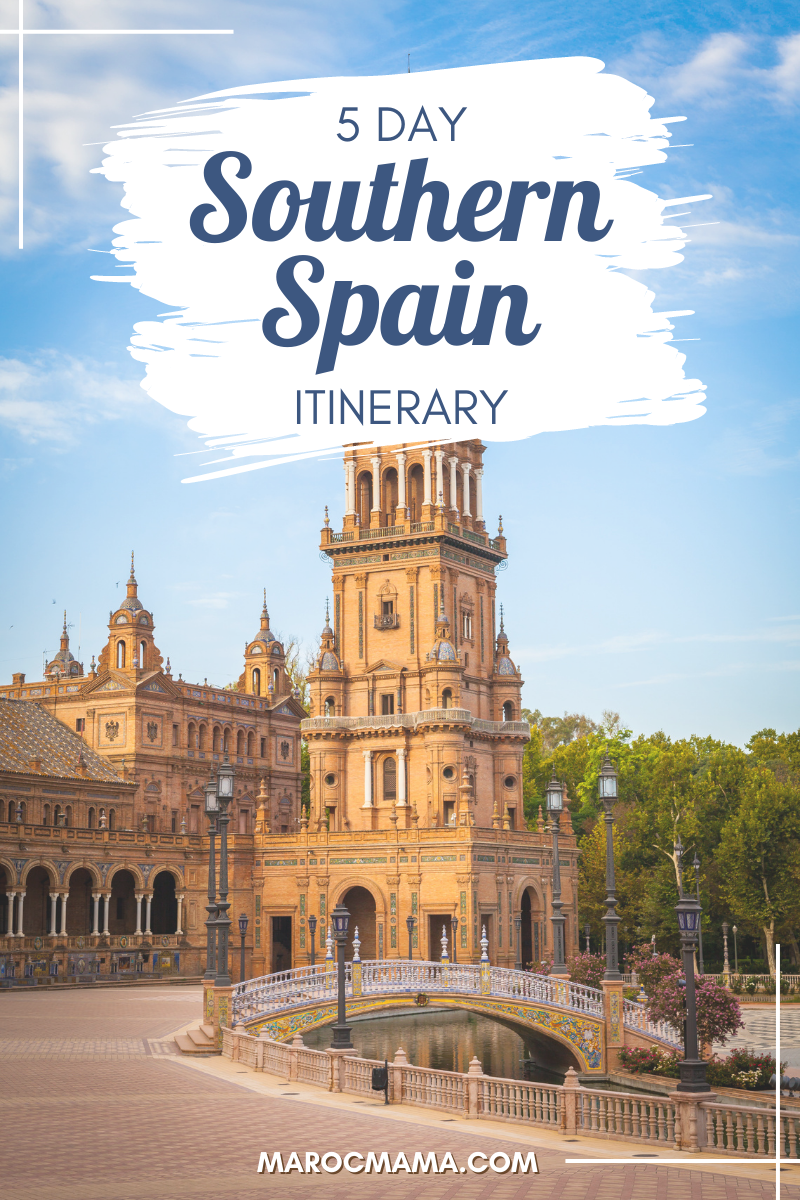 Home to a plethora of architectural wonders, Moorish history like nowhere else in Europe, glistening beaches that boast some of the best the Mediterranean has to offer, and natural goodness all over, the south of Spain is a region unlike anything you’ve seen before.

Add to the mix plenty of local wine, endless sunny days, delicious tapas, and an intricate blend of cultures and you’ve got yourself the perfect recipe for a marvelous trip.

Starting in Seville, this southern Spain itinerary will have you exploring some of the best this unique region has to offer. Will 5 days in Southern Spain be enough?

This is a suggested itinerary to see southern Spain when you have 5 days. This itinerary tries to make the most of limited time. Adding an extra day in Seville or Malaga would also be a good option.

Home to one of the busiest airports in Spain, Seville makes for the perfect hub to start your Southern Spain itinerary.

Begin the day by checking out Plaza de España, one of Seville’s biggest icons and a place you could virtually spend hours exploring. Check out its rooms, admire its intricate details, and, if you feel like it, you can even ride a moat around the plaza’s canal.

Afterward,​​ head over to the waterfront. Here, you can stroll for several hours and see some other highlights of the city, including the famous Torre de Oro as well as several bars and restaurants to grab tapas in before walking over to the historic Jewish Quarter. Once there, you’ll find maze-like cobblestone streets lined by gorgeous white and yellow houses that create the perfect setting to wrap up your time in Seville.

Cádiz is a city that is often overlooked on most people’s southern Spain itinerary but is very well worth the small detour.

Cadiz is said to be the oldest city in Europe and the longest continually inhabited one in Spain, making it a treat to visit if you still haven’t gotten enough of southern Spain’s glorious architecture and historical goodness.

Start your morning by walking over the Malecon. This is the city’s waterfront promenade and a place where you’ll get beautiful views of the bay as well as the pastel-hued buildings that line the shore. From here, you can spend several hours exploring the city’s biggest historical highlights, which include the Catedral de Cadiz, the Iglesia de Santiago Apostol, Parroquia de San Antonio, Castillo de San Sebastián, and Castillo de Santa Catalina.

To end your time in Cadiz with a bang, spend the afternoon relaxing at Playa de la Caleta. This is a pretty small beach located right by the historical center where you can sunbathe and get a taste of local life in the city.

Because Ronda is relatively small, you can cover a ton of ground in less than 24 hours.

Start the day by marveling at the Puente Nuevo, a bridge built in the 1700s that connects both sides of Ronda. You can see the bridge from pretty much any point in town, but walking down to the gorge is highly recommended in order to see its full splendor. The hike takes around 2 hours.

Next up, check out the Plaza de Toros, the birthplace of Rodeño-style bullfighting in Spain. For an interesting museum visit, you can head over to the Museo del Bandolero, where you’ll get to learn all about some of Spain’s biggest bandits!

Afterward, you can spend a few hours simply strolling through Ronda’s white-washed streets. You’ll stumble across plenty of viewpoints, including tons of cafés and restaurants where you can take a rest and grab a bite or a drink with beautiful views of the bridge.

To cap off the day, head over to the San Miguel Quarter to enjoy the town’s famous Arab baths. Here, you’ll get to experience an authentic hammam inside a beautiful Moorish building that was built back in the 13 century and is still perfectly preserved.

One day in Malaga is enough to see its highlights. Start the day by walking up to the Alcazaba, one of the best-preserved and iconic Islamic heritage sites in entire Spain. You’ll be able to explore the lavish rooms that make up the palace, walk through gorgeous gardens, and take a glimpse back in time when the area was ruled by Muslims.

Next, take a few hours to stroll through the city’s historic center, where you’ll be able to cross off a few more landmarks, eat churros, and stop by a few cafés and bars to try authentic tapas.

From here, you can head over to the oceanfront side of the city. At the port, you can catch beautiful views of the Mediterranean, hit Malagueta beach, and check out the Centre Pompidou Malaga, which is a branch of the museum in Paris.

Malaga is the city where Picasso was born and where he spent a decade living, which means you’ll find plenty of artistic goodness while strolling its streets. Next up on the itinerary is heading over to the city’s Historic Quarter, where you’ll find plenty more to see on the streets including the Picasso Museum. The museum is home to over 4000 artworks of him!

Set on the foothills of the alluring Sierra Nevada mountains, Granada is a place that, for centuries, was occupied by the Moors, making every step in this quaint town feel as though you’re taking a trip back in time to that period.

Begin exploring Granada by checking out its main cathedral and the royal chapel next to it. Despite the fact that they boast Renaissance architecture, they’re actually some of the newest buildings in town! From here, you can take a few hours to explore downtown Granada on foot, where you’ll be treated to other beautiful landmarks reminiscent of Moorish times. Think passageways where bazaars once stood, former mosque schools, and hammams!

Last but not least is walking up to the Alhambra, which is Granadan’s most popular sight and the reason most people even visit this city in Andalucia! This massive complex dates back to the 13th century and is where the Emirates of Granada ruled until the Muslim dynasty ended.

More Posts for Planning Your Trip to Spain

Things to do in Madrid

Taking the Ferry Between Spain and Morocco