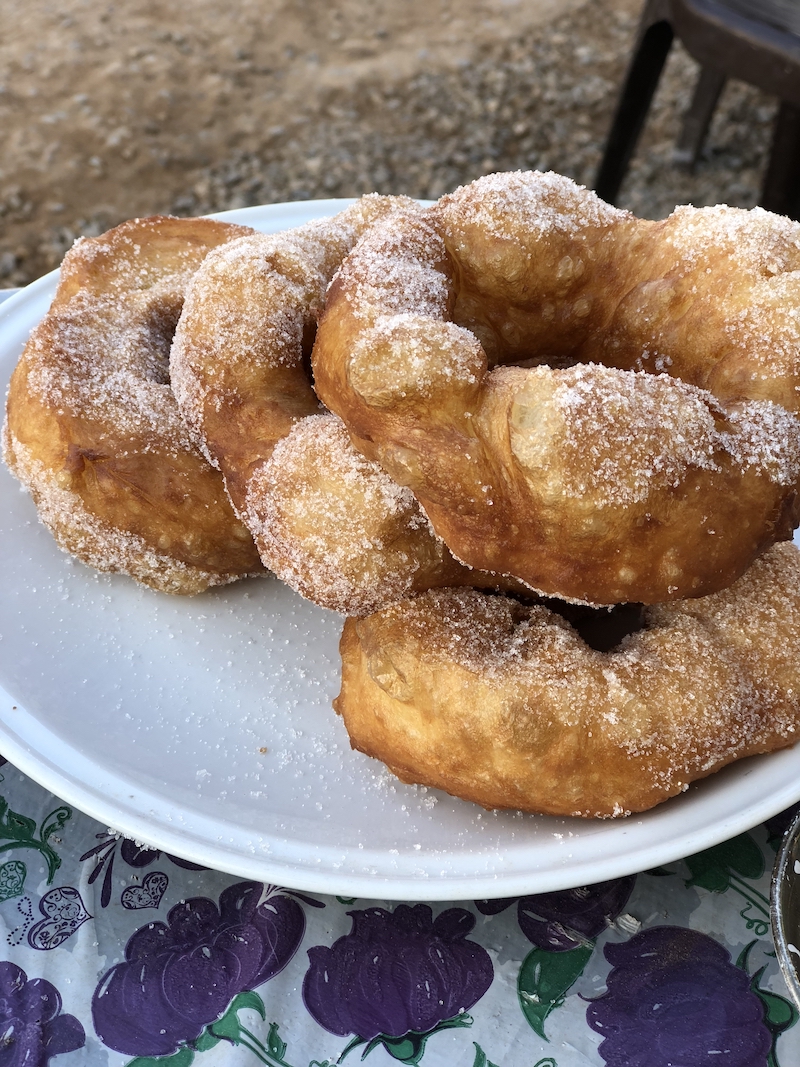 When we started our food tour business one of the items that we knew had to be included was sfinge doughnuts. They are a staple street food loved by Moroccans of all ages but they generally don’t grace restaurant menus so few visitors try them. I’m calling these a Moroccan dessert but they’re never served after a meal, they’re more like a breakfast treat or an afternoon snack.

These tasty, delicious doughnuts are sometimes made at home but are often bought from street vendors. Fried dough must be a staple in every culture but just thinking about these doughnuts makes my mouth water. I make them at home now on cold winter nights with a big mug of hot chocolate. Yum!

Generally, sfinge are available to be purchased at two times of day; either in the early mornings or late afternoons. They can be eaten as breakfast, or as a morning snack alongside coffee or tea.

The most popular time to eat them is for goûter or the afternoon snack. Most sfinge shops won’t open until around 4pm and will remain open until they sell out. Sfinge are bought by the piece for a few or by the weight for many.

Other Names for Moroccan Doughnuts

Some of the other names that you might hear these called include;

None of these is specifically the correct term but they can be used when people are trying to describe sfinge.

Are Sfinge Eaten at Hanukkah?

Yes, and no. I’ve done a lot of research and asking around about the origins of sfinge and if they are related to sufganiyot the doughnut often eaten by Jews during Hanukkah but I’ve never found anything concrete.

Like many food history narratives, there’s not likely to be any single piece of evidence about the origins. Sfinge are eaten during Hanukkah by Moroccan Jews but they’re also eaten during Ramadan by Moroccan Muslims. They transcend religion and are popular with all Moroccans.

The Best Toppings for Sfinge

When you buy sfinge on the street they are given to you plain. Some people prefer to eat theirs this way, and they taste just like fried dough. But if you’re someone that prefers something a little more these are some of my suggestions.

The best part of these doughnuts is they’re not actually that hard to make. You really just need to whip up the yeast dough, let it rise in a warm place, and then fry them. The key to making sure these come out with the right texture is to have the oil at a constant temperature and not crowd the pan.

Cooking one to two sfinge at a time is generally enough, as you want them to have space to puff up. Once they start to turn a golden brown flip them over.

They should be eaten right away because as they cool down they are not as good. They’re also not great reheated so cook and eat immediately!

Sfinge are a popular street food treat in Morocco eaten in the mornings or afternoons.

1. In a small bowl dissolve the yeast in the warm water. In a large bowl mix the flour and salt. Add the water and yeast mixture, and stir vigorously with your hand or a spoon until smooth. The dough should be too sticky to knead or shape.

2. Cover the bowl, and leave the dough to rise for one to two hours, until double or triple in bulk.In a wide pot heat at least an inch of vegetable oil until hot.

3. Fill another bowl with water and set to the side. You should have three bowls ready. One with your dough, one with water, and a third with sugar.

4. Cover a large plate with paper toweling or a towel. To begin dip your hand in the water and pull off a piece of dough about the size of a plum.

5. Using your fingers make a hole in the dough and stretch into a ring.

6.Place into the oil. Repeat with the remaining dough. Be careful not to crowd the pan.

7. Depending on the size you may only be able to do 2 or 3 at a time. Fry them until golden brown, flipping a few times to make sure both sides are cooked well.

8. Remove from oil and set on plate to drain.

9. Once the extra oil has been absorbed, roll them in the sugar mixture before they cool off.

In Morocco they're rarely rolled in sugar and instead could be dipped in honey.

We've been making these for Chanukah for the past few years. We roll them in cinnamon sugar and drizzle with chocolate sauce (not exactly Moroccan, I know). Really yummy. I love that the dough isn't sweet. Thanks for the recipe!

[…] & Olives), or Couscous w/ 7 Vegetables in the Fez Manner but we have been bold enough to make Sfinges and Bisteeya and try many Kdras and Tagines and one of my simple favorites, Marak Silk (Tagine of […]

Sfinge!! Yay! Love these. My husband bought these a few times during my stay in Marrakech. They weren't sugar-coated though. And we have a fun happy memory of buying these from a street vendor on the way home from the cinema.

Most Moroccans eat their Sfinge without sugar, it's almost a savory treat. I remember my parents bringing them home to eat with a nice cup of Nana tea. I'm making them this week for Chanukah and it's going to bring back a lot of memories.

That's interesting - I wonder if it's regional? Everytime I've eaten sfinge in Morocco they were rolled in sugar!