When I started researching Moroccan Jewish recipes one of the most common dishes mentioned was dafina. Consider this the Jewish version of Moroccan tajine. There’s one process to make it but with a wide variety of variations. It’s safe to say that while being a shabbat recipe, dafina is also popular for holidays such as Hanukkah.

This dish goes by a lot of names so whether you’re seeking Moroccan dafina recipe, skhina recipe, Moroccan cholent or hamin recipe this is what you’re looking for!

When I asked my (Muslim) mother in law if she had any idea what was in the recipe she really didn’t. Growing up my in-laws lived very close to the Jewish quarter of Marrakech and often had a lot of crossover with their neighbors. She was familiar with Moroccan Jewish food but didn’t have experience making it.

I was hopeful she might know how to make this and while she had eaten it before, she wasn’t sure how it was made. So back to the research. I did a lot of asking around, reading and searching through cookbooks to find some sort of recipe.

Then, I invited my mom and stepdad over to eat this with us one night and I began to tell them a little about the dish. This storytelling reminded my husband of hearing the synagogue announcement that shabbat was starting. The mellah (Jewish quarter) of Marrakech, or Jewish quarter, was very close to where he grew up in the kasbah.

I shared that this dish was made in a pot similar to a tangia and then would be dropped at the ferhan to cook overnight on Friday’s. (The ferhan is the community oven, while these are still widely in use today many people choose to bake their bread, and cook food at home) Observant Jews do not do any physical activity including cooking (or even turning on a light) on the sabbath.

This dish could be taken home, or often delivered to homes by Muslim neighbors, poured out and eaten. So while the specific foods eaten may vary many of the same cooking techniques are the same. This isn’t so surprising. 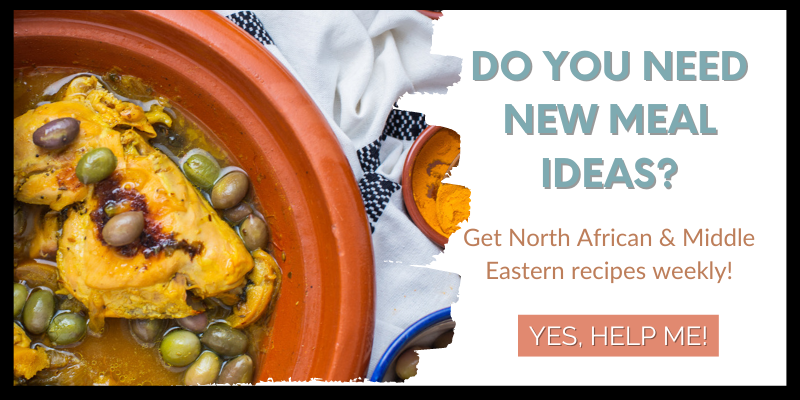 Moroccan Jews are Sephardic Jews, and there is a lot of crossover between what and how they eat. Sephardic Jews traditionally originated in the Iberian Peninsula. Many of these people moved to areas that were Islamic lands and lived in these countries. Muslims and Jews share many of the same dietary rules (especially when compared to Christians and Jews or Christians and Muslims) so there is a crossover between the foods that are eaten.

The recipes I found instructed that the dish should be cooked in the oven on low overnight. I have reservations about leaving my oven on overnight so I chose not to.  Instead I opted to make this cholent recipe in a slow cooker. This wasn’t a Moroccan shabbat recipe – at least not for us as we aren’t Jewish – but you could easily make it if you are observant and looking for something new.

My understanding is that some Jews use slow cookers to prepare their shabbat meals so I felt like it was still in line with tradition. Overall it was a very easy recipe with good results.  The taste is very similar to other Moroccan dishes but the addition of hard boiled eggs made it slightly different.

In addition to the main meat, vegetable and chickpea portion there are “puddings” that can accompany the dish. While the main skinha recipe here is different than mine the additional wheat berries and rice dumplings are very similar to other recipes I’ve seen for accompaniments.

One more quick note, this recipe traditionally includes beef feet. While we do have these (don’t ask MarocBaba likes them) I omitted them as I don’t care for it and was pretty sure neither my mom or the kids would touch dinner if they saw them included. I’ll include them in the recipe but just know omitting them is ok.

If you’re looking for a vegetarian Moroccan cholent recipe this can be made without meat. I’d add additional vegetables (either more of what’s listed or other things, cabbage would be great) and also consider something like white beans to add a bit more protein. I would also increase the spices a little as I find vegetables can sometimes water down the flavor when the liquid releases in cooking.

This is a very traditional Moroccan Jewish recipe often made for the sabbath on Saturday's.

Thank you so much. I just returned from a tour of Morocco and although I had the opportunity to eat Dafina/Skinha on Shabbat in a Jewish home I took ill. May I point out that Jewish Moroccans are not all Sephardic. Jews have been in Morocco for at least 2000 years; The Sephardic Jews from 1492 only 530 years.

My aunts always added a handful of dates to a skhena. This is usually a very big dish. It will not fit in a slow cooker. It is brought to a boil in a big pot and cooks for an hour before going in the oven. I doubt the eggs will turn brown and get that weird taste cooking only 6 hours. Also, there is a dish of rice and ground beef - like a meatloaf - that is part of this dish. The wheat berries and barley are cooked separately with a whole head of garlic and, aside from the cow’s feet, there are marrow bones in the pot. There is lot more to this dish!

Yes, there are many different ways to make it as was mentioned in the text - this is a simplified version that can be made in the slow cooker.

Nice that you posted this! Just a few suggestions: it would be better with beef shank meat and we did not use ox foot but rather beef bone because the marrow is a big part of the flavor. If you are still not liking the idea in the least perhaps ask the butcher for some beef bone broth, the gelatin from the bones has a ton of flavor and nutrients. I would not trim as much fat from the meat either. Without it the meat will be dry, and you want the good fat to render into your stew. You can always remove excess fat after cooking. The only other thing it is missing is either a little sugar or honey, it needs this to caramelize. My family always used sugar (boiled first) but honey is good too. Last thing is saffron. Evey family has their own spice mix for dafina but i think saffron is important for this dish for the aroma and colour. Dafina is a very rich meal and to get the true essence of how delicious this is you really need the fat and bones so maybe pull them out before you serve but for me it is my favorite part :)

Thanks for your tips! I think that I would like to remake this but using some cuts that I prefer a bit more but could still replicate some of the flavors. It's mostly a mental thing for me (and I recognize that!) but I want to enjoy it too!

[…] or just what was passed on.  I don’t really know.  As you’ll see later this week with dafina, the idea of stuffing exists with that recipe as […]

Meat loaf recipe to go with this dish?

@Amanda Mouttaki, I made the meat loaf 1 lb Ground veal 1 lb Ground beef 1 1/2 cups Matzo meal 3 to 4 eggs 1 cup water 1 large onion grated or puréed . 1 cup chopped fresh parsley 1 tablespoon cumin 1 tablespoon turmeric 1 tablespoon garlic powder 1 teaspoon salt 1 teaspoon Hot Moroccan paprika . 1 tablespoon Green top Osem bouillon . No msg . 1 tablespoon sweet paprika . Mix well I put my mix in the middle of a large sheet of Parchment paper but you can use an oven bag also . I added this to my top of pot . To cook with everything else. Low and slow .