Coming to Marrakech on a budget or don’t want to hire a guide? You’re in luck! Today I’m going to provide you with a do it yourself walking tour of the city that will take you as far back in history as possible and bring you to the modern day. It’s not a secret that I love history and living in a city that is nearly a millenium old means there’s plenty to unearth. Book your travel to Marrakech right now and take this along with you! 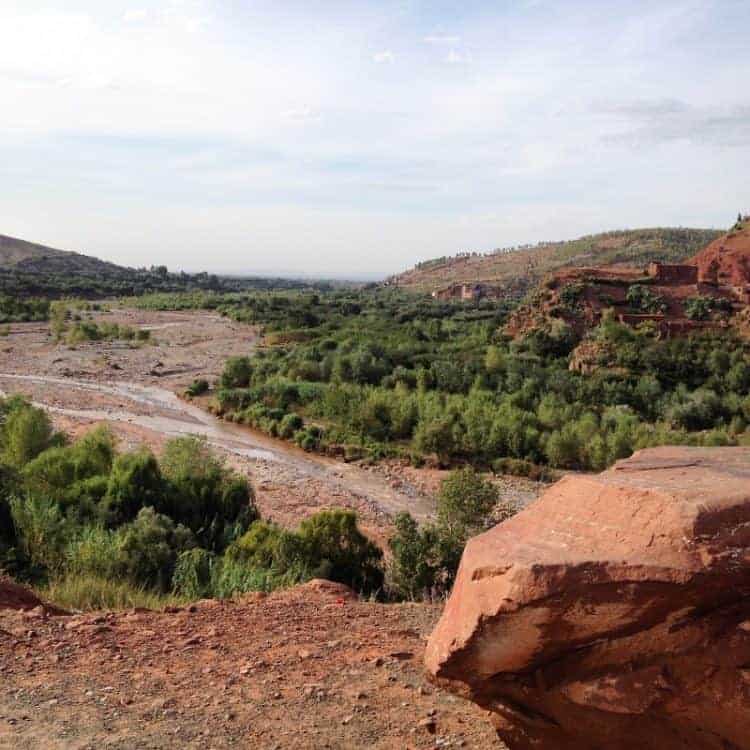 In the years before Marrakech was formally created as a city it was occupied by Berber farmers, dating as far back as Neolithic times. They built settlements around the Tensift River. It was ruled by the Maghrawa, a Berber tribe, noted as one of the first Berber tribes to become Muslim. This was a tumultuous time with power changing back and forth. Visit the Palmarie area of Marrakech today and the Tensift River (that is often dry) to get a sense of place. 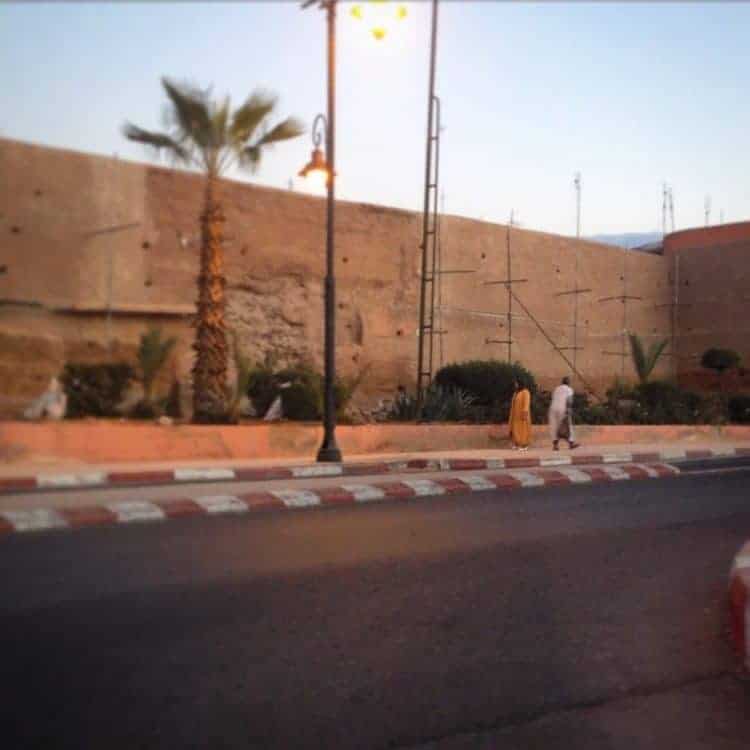 The Almoravids a family from the Sahara first establish Marrakech as a city. They built a palace and the walls of the city as well as digging an extensive underground irrigation system known as khettaras to water the palm groves. You wont be able to miss the ramparts, or walls surrounding the old city of Marrakech. If they look old, it’s because they are – very old! The walls protected the city from invaders and were expanded through time. It was with this dynasty Marrakech became known as an imperial city.

There are several gates that cut through the walls to create entrances to the city. Not so long ago (in my husband’s lifetime) the gates of the city would be closed every night. Many of the actual doors no longer exist but the arches remain. Bab Aghmat, Bab Aylen, and Bab Debbagh date from the 12th century and have a very basic design. Later gates would be more intricate.

From the very beginning the High Atlas Mountains played a pivotal role in the existence and success of Marrakech. It connected the city to the trans-Saharan trade and throughout history whoever controlled the Atlas, often also controlled Marrakech.

The only piece of architecture remaining from this dynasty today is the Koubba Ba’adiyin near Ben Youssef Medrassa. Unfortunately visitors can only view it from the exterior as the inside is undergoing structural repairs.

The Almohad Dynasty reigned a long time over Marrakech and their crowning achievement was the building of the Koutoubia mosque in 1147. It was one of the largest mosques in the western Islamic world and the ruler of the time, Abd el Moumen built it to highlight his victory over the Almoravides. The project was completed under his grandson Yacoub el-Mansour’s watch. A visit to Seville, Spain or Rabat, Morocco may have you scratching your head as both the bell tower of the (now) Seville cathedral and Hassan Tower are almost identical. Koutoubia was given it’s name because previously the area surrounding the mosque was where booksellers peddled their wares. The prayer hall accommodates 20,000 worshipers and during the holy month of Ramadan the streets surrounding the mosque are closed each night as thousands more attend tahraweh (a special evening prayer) prayers. Non-Muslims can’t go into the mosque itself but you can tour the outside and the gardens nearby are nice for an afternoon stroll. 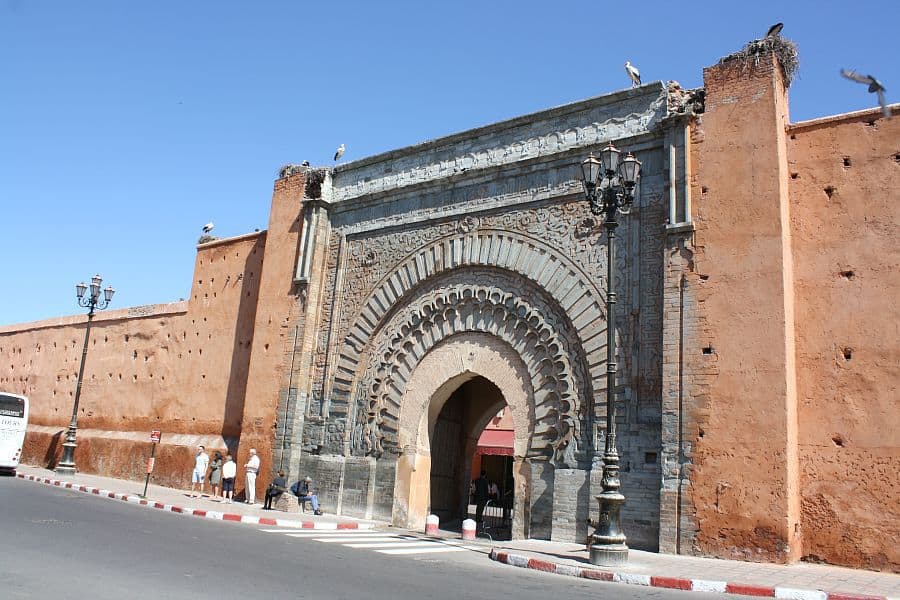 Yacoub also built the Kasbah area, the kasbah mosque, and Bab Aganou, the entrance to the kasbah. These three items are all that remains of the Almohad dynasty. The impressive Ben Youssef Mosque is also part of their work. Improvements and expansions were made on the earlier irrigation systems allowing for the Menara and Agdal Gardens. 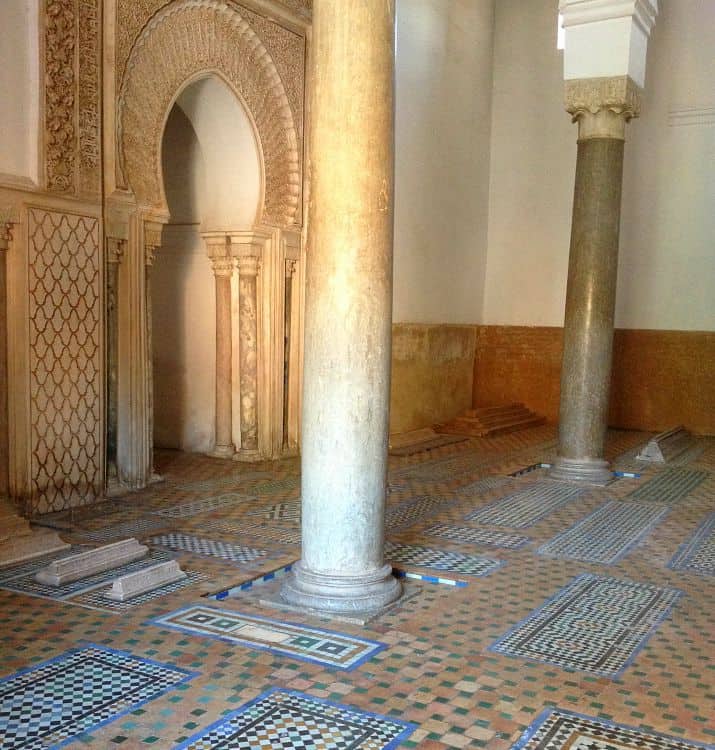 The Saadians hailed from the Draa Valley and were invited to Marrakech by the Sufi brotherhoods to help protect the city against Portuguese invaders. Between 1514 and 1515 the city suffered greatly from famine and conflict, depopulating the city. Droughts and failed harvests continued through 1522. The Saadian rulers took steps to feed the people in surrounding areas – winning hearts and minds. While they spent considerable time securing and fighting off invaders they also added their own touch to the kasbah quarter – making it their own area. They added to the Ben Youssef Mosque and built the Medersa section. Finally they built the Saadian Tombs, their own necropolis. It was also during this time that the Mellah (Jewish quarter) was established due in large part to the influx of Jewish refugees from Spain.

The Saadians build many more mosques as well as Sufi shrines such as Sidi ben Slimane and Sidi bel Abbas and the al Badi Palace. 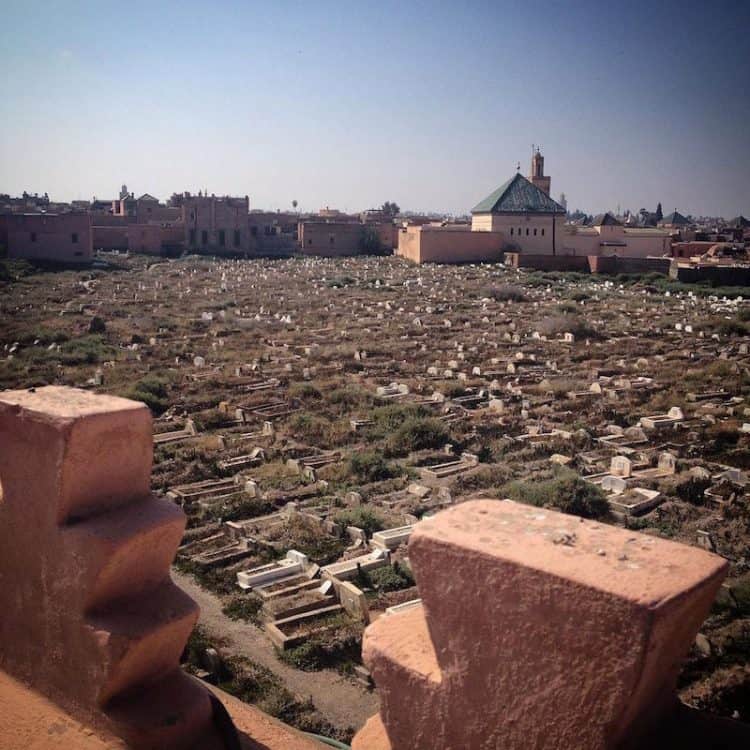 After much upheaval and changing hands the infamous Moulay Ismail took control of Marrakech and sadly, stripped nearly all the royal palaces and monuments to relocate the materials to who is main palaces in Meknes. But, as drastic as this action was he also wanted to give Marrakech something and it was turning it to a pilgrimage site much like Essaouira was. For one week in late March pilgrims were to visit each of these in order. 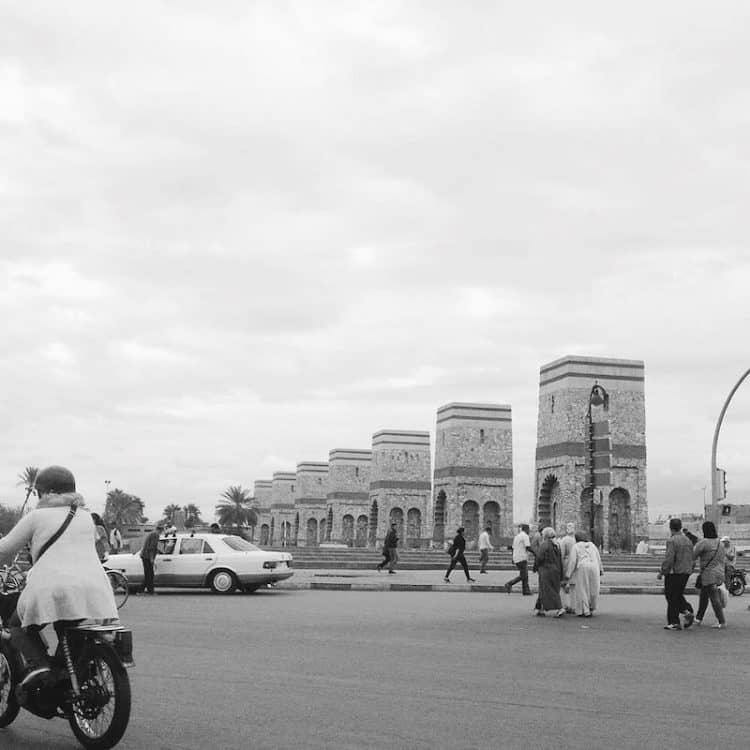 3. Abu al-Abbas al-Sabti (“Sidi Bel Abbes”, d.1204), by the Bab Taghzout in the north (note: the pilgrimage route from 2 to 3 passes usually outside the eastern city wall, and re-enters at Bab el-Khemis, in order to touch the shrines of Sidi el-Djebbab and Sidi Ghanem along the way, although they are not part of the Seven); from Bab Tahgzhout, the pilgrimage path heads straight south through the middle of the city, visiting in succession the shrines of

6. Abdallah al-Ghazwani (“Sidi Mouley el-Ksour”, d.1528), just below the al-Mouassine Mosque then exiting the city again, through the Bab al-Robb gate (west of the Kasbah) to reach the final shrine

Things didn’t go so well. The territories were broken up amongst his sons and there were several crisis, especially in 1799 when a massive plague hit the city. Suleiman, the ruler of the time also completely rebuilt the Ben Youssef Medrasa – so what you see on the interior today is different than the original. 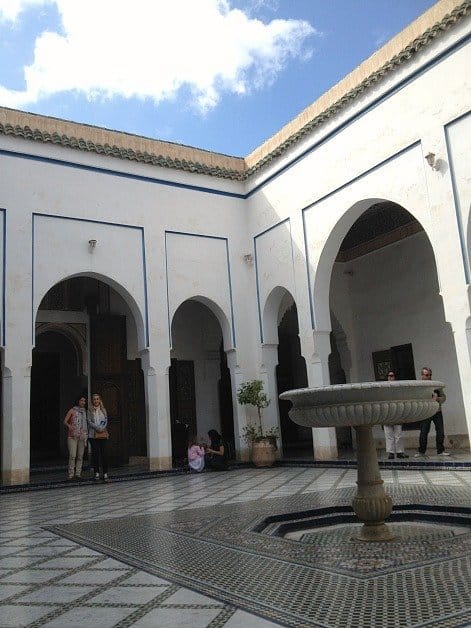 Foreign influence was felt throughout the region and the country as well as more famine and instability amongst groups inside. Morocco came onto the world scene and hosted delegations from across Europe. In 1880 the Bahia Palace was built for the grand vizier of Marrakech. Many other of the now famous palaces and riads were also constructed or expanded on. Dar Menebbi (now the Musee de Marrakech) and Dar el Bacha, known better as the residence of Thami el Glaoui was also built. Today you can view the outside but the interior is not accessible. 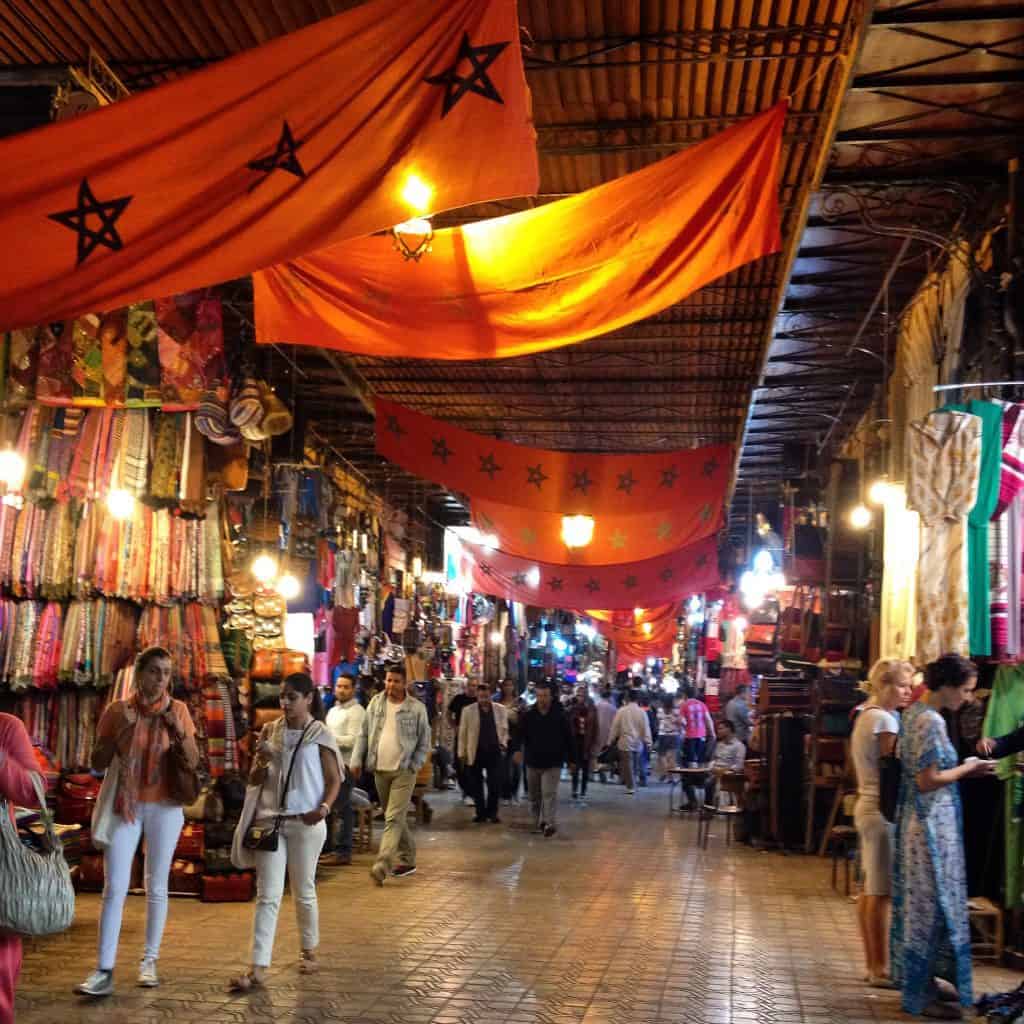 I’ve done a series of posts on Morocco in the 20th century all highlighting different eras and the issues that faced the country. Morocco expanded greatly moving from the walled medina to Gueliz and neighborhoods further afield. New homes have been built and Morocco changed from a desert outpost to a hot spot of nightlife and culture.

On any guided tour you take while visiting you’ll be sure to get more information than I’m able to provide but having a general background and idea of the people and situations that led to modern Marrakech today may help you make more of your time here. 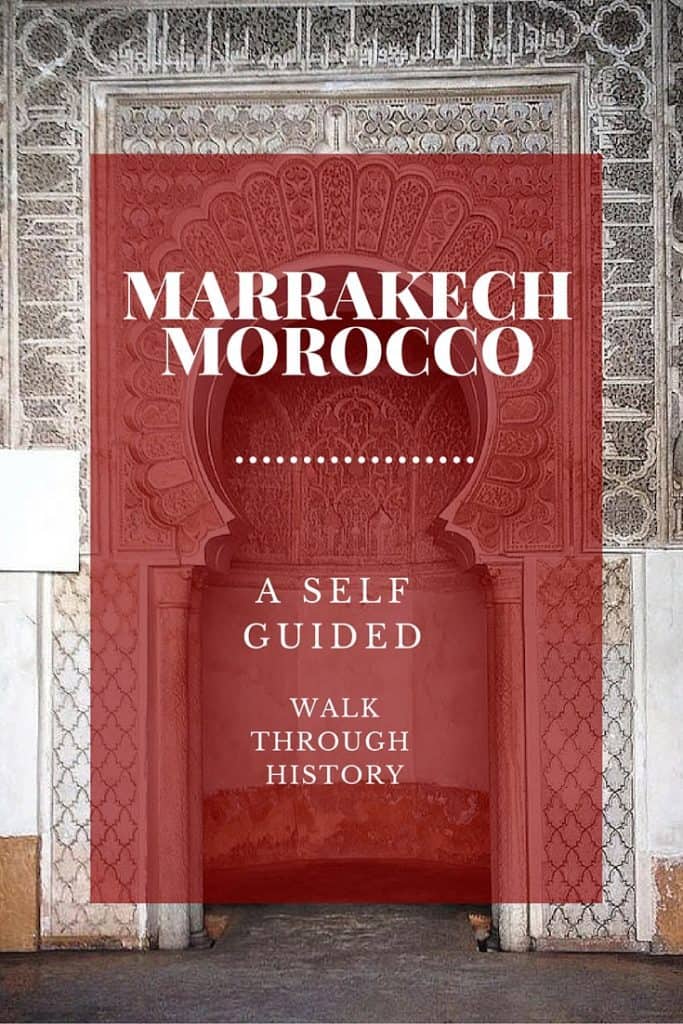 Disclaimer: I have done my best to provide information based on my own reading and research of Marrakech and the country. If there are any oversights or errors please accept my apologies. For more reading check out some of these favorite books.

The Mellah of Marrakesh: Jewish and Muslim Space in Morocco’s Red City

Lords of the Atlas

How to Take Your Own Walking Tour of Marrakech - MarocMama

[…] whose only aim is to make as much money as possible via commission of sales. I put together my own walking tour of Marrakech through history some months back that many people have really enjoyed. I even started thinking of some different […]

Hi, it was a very useful and interesting post, Amanda. Just a question concerning to a Sufi Pilgrimage Road, these 7 sites are all Koubba? I didn't know about the pilgrimage road at all, it might be very interesting to follow the route someday!

The statues are just a monument. There are shrines around the city but they're a bit hard to find. There are some city guides that know them well and do tours - which is super interesting!