If there is one European power who has made an indelible mark on Morocco it is France.  Beginning in the 15th century the Portuguese invaded and controlled the Atlantic coast but made no inroads to the country. As early as the 1830’s France expressed and began exercising interests in Morocco.  Throughout the 19th century European powers such as Germany, Spain and Portugal all expressed some degree of power in the nation however it was France who ultimately gained a “sphere of influence” that was recognized.  By 1906 special policing of the nation was entrusted to France and Spain. There was increasing tension between the European powers throughout the early 20th century culminating in the signing of the Treaty of Fez in 1912 making Morocco a protectorate of France. Morocco was never fully a colony of France as was neighboring Algeria or Tunisia. It was still a sovereign state, the sultan reigned but he had little to do with the ruling of the country.  Through this same treaty Spain assumed the role of protecting power over the northern and southern zones of the country. Spain was given control of pieces of Morocco in the far north as Tetouan and South to Cape Juby. Tangier received special international status. 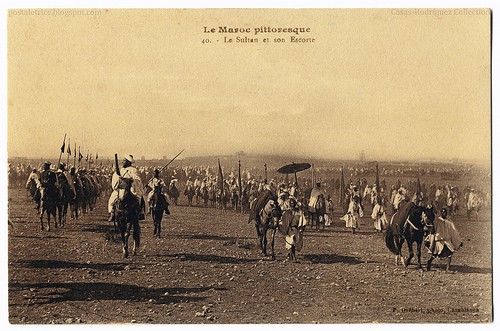 Once the protectorate was in place French settlers began to establish themselves in line with the French rulers to create a strong French alliance in the country.  While the French pacified native Moroccans they promoted things such as economic development, urban planning and the building of roads and the infamous French boulevards, creation of a railway system and a modern agriculture sector geared to the French market. Thousands of French emigres entered Morocco and bought up agricultural lands pushing out native Moroccans.

The legal, governmental and education systems began transitioning to use of the French language.  This in turn disenfranchised the majority of Moroccans who were not of the elite class. Many facets of life would soon “French-ified”, including food.

Walk around any city in Morocco and stop in a cafe serving food and you will most like see “le petit déjeuner” or breakfast on the menu. This is a quick meal usually consisting of some type of bread, croissant or pain au chocolate. This breakfast is often eaten in Moroccan homes as well.  Second only to round loaves of khobz bread is the baguette a staple Moroccan starch.

Lunch in France is an affair, traditionally the larger meal of the day lasting between 1 and 2 hours.  This is not only a French phenomenon but the countries that were once under French control still maintain this tradition today.

Dinners do look a bit different though in both French and Moroccan homes a salad or two will be served with a main course. Bread is also a staple for the meal. Dessert in both instances will most likely be fresh fruit. Meals in both countries tend to be much later in the evening than in the US.

I really don’t have a way to verify that any of these are directly related to French influence I only found them to be very similar in nature.  This could be just tradition or they could play off of each other. I think that each cooking tradition is bound in the tradition of hearty peasant food.

Some of my favorite French/Moroccan recipes include;

Semolina Honey Cake (the semolina and honey reminder me of Morocco)

Now it’s your turn! What are some of your favorite Moroccan recipes with a French connection? Or, a favorite historical bit about Morocco from 1900-1919? Leave a comment below!

[…] was never a full colony of France but was a protectorate for several decades. The French legacy lives on in many ways, one of which […]