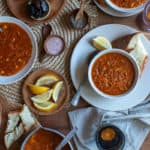 For Moroccans, harira soup is a Ramadan ritual.  Every evening families sit down to bowls of steaming harira – even when daytime summer temperatures soar about the 100F mark. As far as soup recipes go, you’ll find quite a few ingredients in this one, however don’t be intimidated as the process itself is pretty simple.

I love soup, but the last thing I want to do is leave my stove on for hours during the hottest part of summer. Instead, I created this quicker version to satisfy the Ramadan ritual but keep my house at a tolerable temperature.

Traditional harira is made with dried lentils, dry chickpeas, rice, vermicelli noodles, a potpurri of herbs and spices, vegetables, and meat – most often lamb. If you’ve ever cooked with dry chickpeas you’ll know this part of the cooking process can take hours, just to soften the beans.

I really prefer this soup without meat (but that’s kind of every food lately!), and omitting meat automatically cuts off cooking time.  My next shortcut is to use a pre-made broth and canned chickpeas.

I even filmed an episode for a series called Chez Benali that is airing on NPO2 (Dutch national TV). The recipe I shared was this one for my version of gluten-free, vegetarian harira. You can catch the episode I’m in below. The entire series is really good and isn’t all in Dutch so don’t worry!

I wasn’t sure how this short-cut soup was going to be received but surprisingly MarocBaba actually preferred this version to others that I have made. I know that this is one recipe I’ll be holding onto for a long time to come.  When the temperatures drop I’ll be wanting a big giant bowl of this harira to warm me up.

This dish is not only vegetarian but it’s a vegan Moroccan harira soup. I use brown lentils as they are easy to find in Morocco and inexpensive but you could also make this with red lentils, just add them a little bit later as they don’t take quite as long to cook.

This soup takes 45min to 1 hour to make.  Traditional harira takes several more. You might not be making this every night, but by making one big pot you’ll be guaranteed leftovers.

To preserve, transfer soup to smaller-sized, freezer-safe containers and allow it to cool completely. Cover the containers, and pop them into the freezer.  When you want to use it again, transfer it to your refrigerator until the soup can be removed from the container.  You could also submerge it partway in warm water.  Heat through in a pan on the stovetop.

Harira is a staple soup made during Ramadan in Morocco. My version is gluten free, vegetarian and ready in an hour!

Puree onion and garlic in a food processor. Add to pot and sauté with the oil. 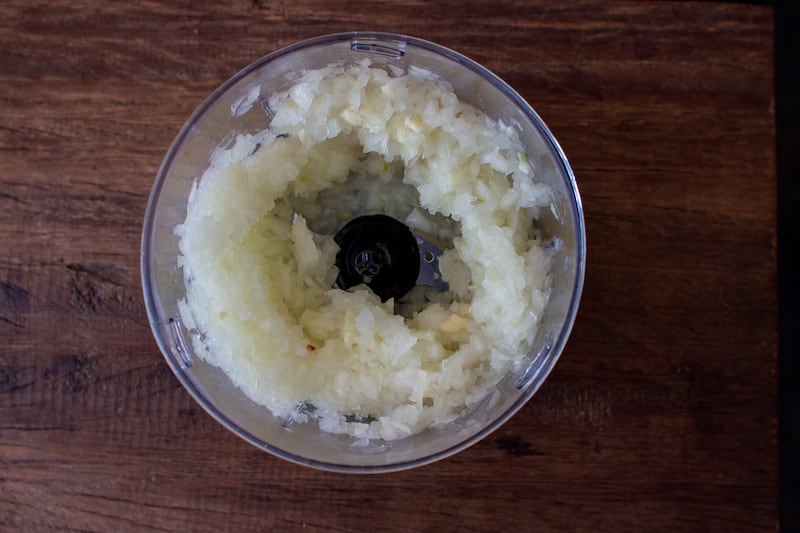 Puree tomatoes with parsley and cilantro and add along with another tablespoon of olive oil. 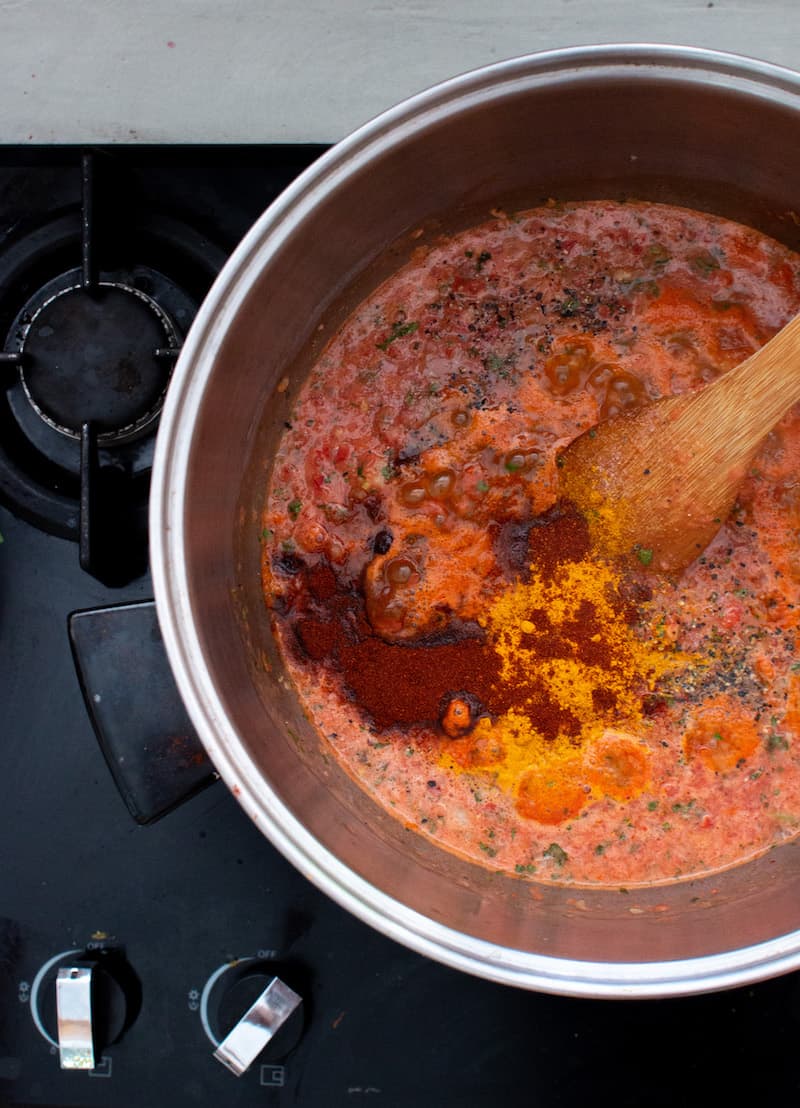 Bring the soup to a boil and add lentils and garbanzo beans. Cover and cook until tender.

The length of time will vary but should take about 25 minutes.

Once beans are cooked, add the pasta or rice and continue to simmer for another 15 minutes.

When the lentils, beans, and pasta/rice are cooked through it’s time to thicken the soup.

In a separate bowl whisk together cornstarch and 1/2 cup of warm water until it is a thin consistency. There should be no lumps. Begin to stream the slurry into the harira. The soup should begin thickening almost immediately.

The final consistency will be between a soup and a stew. However you can make it as thick or thin as you like.

Harira is typically served with dates, boiled eggs, and chbekiya during Ramadan but it also can be accompanied by lemons to squirt onto the soup and extra salt, pepper, and cumin to season.

This is often served alongside dates, boiled eggs and chbekiya on a traditional iftar table during Ramadan but you could simply have some fresh bread or even a salad alongside to lighten things up.

Some other Moroccan vegetarian recipes you can find on MarocMama include;

Hi, Thanks for the recipe! Is the 6 cups of water supposed to be vegetable stock?

You can use either. Using vegetable stock will have a deeper flavor but if you don't have it available you can use water and the vegetables will give it flavor as well.

Sad that the recipe is now gone. Was thinking to cook for the maroc hubby this Ramadan. Any way the recipe can be up again?

[…] recipe. Last year, my step-sister put together gift boxes filled with the pantry ingredients for Vegetarian Harira Soup.  Click over to the recipe and package up all the dry ingredients in a mason jar or another cute […]

I tried this recipe and I think it's too spicy by adding 1 Tablespoon paprika. Next time, I added 1/2 Tablespoon paprika, it was still spicy. Please advise to avoid spicy flavor. I am Indian and I cook Indian food, and this tasted very spicy to me.

Hi Nsk- are you using paprika or red pepper? Red pepper will be way too hot. The paprika we use is very mild, just a smoky flavor - I'm thinking that may be the issue?

How many servings is this? I have to feed 4 plus I want leftovers.

Hi Angela - this will certainly make 4 servings with some left over! If you want leftovers, keep the rice/noodles separate and add them to the dish as you go. They don't freeze/reheat well.