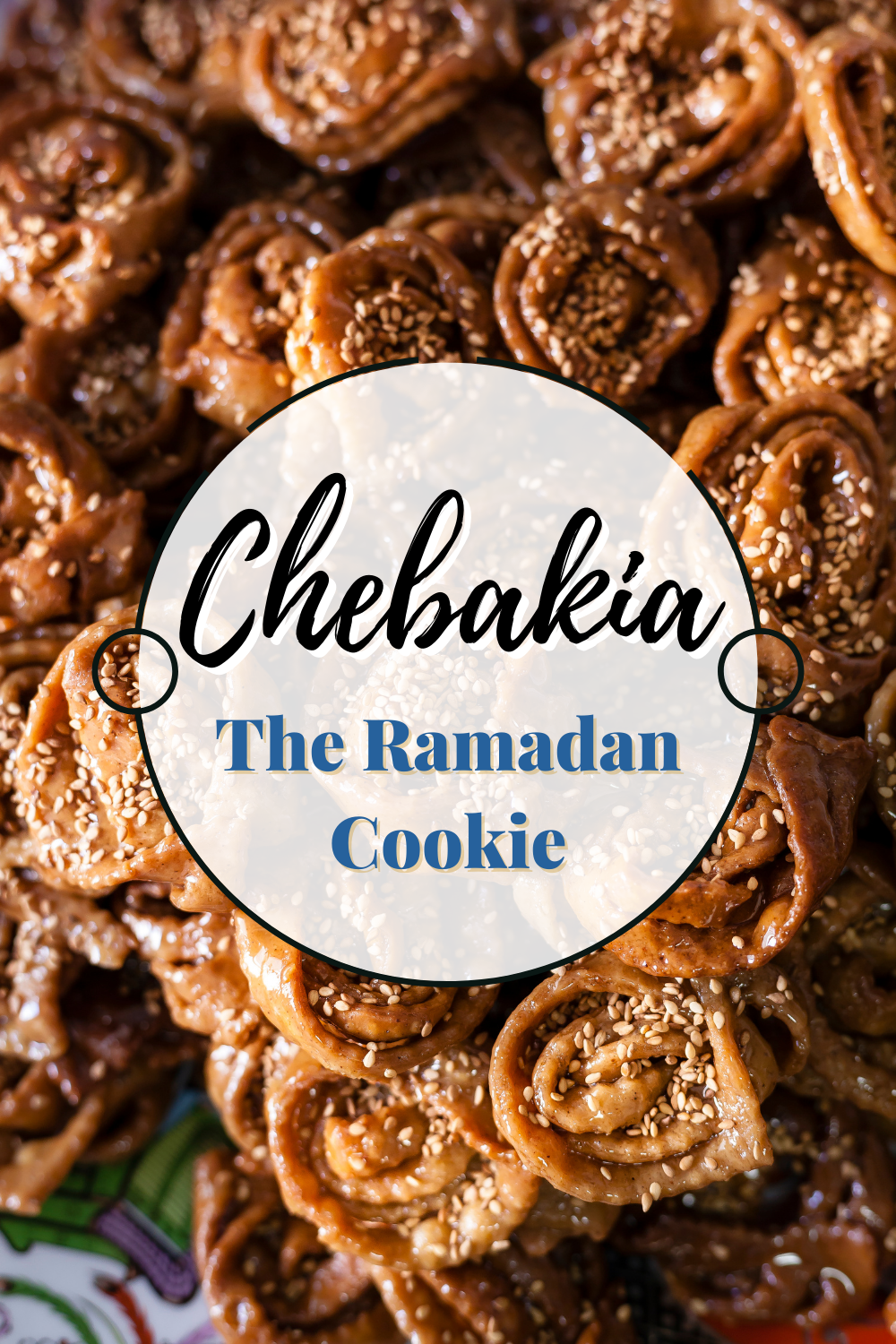 A staple in Morocco for Ramadan is the chebakia – a flavored cookie that is fried and then soaked in honey and sprinkled with sesame seeds.  I love these cookies but they are a little difficult to make.

I attempted to extract the exact recipe from my mother in law but they don’t measure anything and they also make these in HUGE batches – and by huge I mean about 10-15kg at a time.  So this is a scaled down version of the recipe.

Because they are so time-consuming many families will get together to split the work and then share the bounty.  This recipe will make about 2 kg of cookies (or a little over 4 pounds).

These cookies appear on every Ramadan table in Morocco. They're often sold in advance of the holiday but if you don't have access, try making them yourself! Don't be intimidated by the long instruction list; I attempted to explain in detail to make it easier.

Ahead of time, pick through the sesame seeds to remove any debris. Spread them on a baking pan and toast the sesame in a 400° F (200° C) oven for 10 to 15 minutes, or until the sesame seeds are crunchy and nutty-flavored.

Allow them to cool thoroughly, and then store in an airtight container until ready to use.

Grind one bowlful of toasted sesame in a food processor until it turns powdery. Keep grinding until the powder becomes moist enough to press or pack.

Mix the ground sesame with the flour and other dry ingredients in a large bowl.

Add the remaining ingredients and mix with your hands to form a dough.

Add more flour if necessary to achieve a dough that is rather stiff but pliable.

Knead the dough by hand for seven to eight minutes or in a mixer with dough hook for four to five minutes.

Divide the dough into four portions, shape each into a smooth mound, and place the dough in a plastic bag to rest for 10 to 15 minutes.

Roll and Cut the Dough 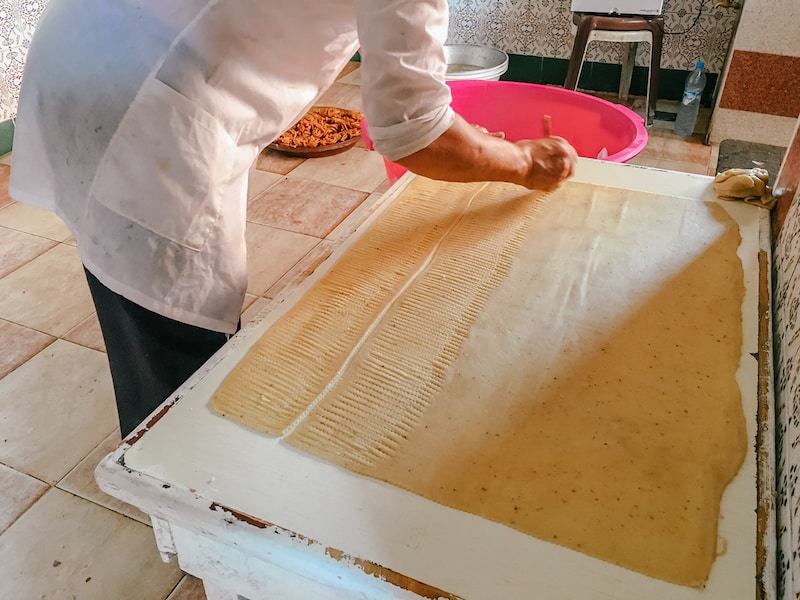 Take one of the portions of dough, and roll it out to the thickness of a thin piece of cardboard. Lightly flour your work surface if necessary.

Use a pastry cutter to cut the dough into rectangles approximately the size of your palm.

Make four evenly spaced cuts lengthwise in each rectangle. These cuts should be almost the length of the rectangle, but should not cut through to the edges of the dough.

The resulting rectangle will have five strips of attached dough. 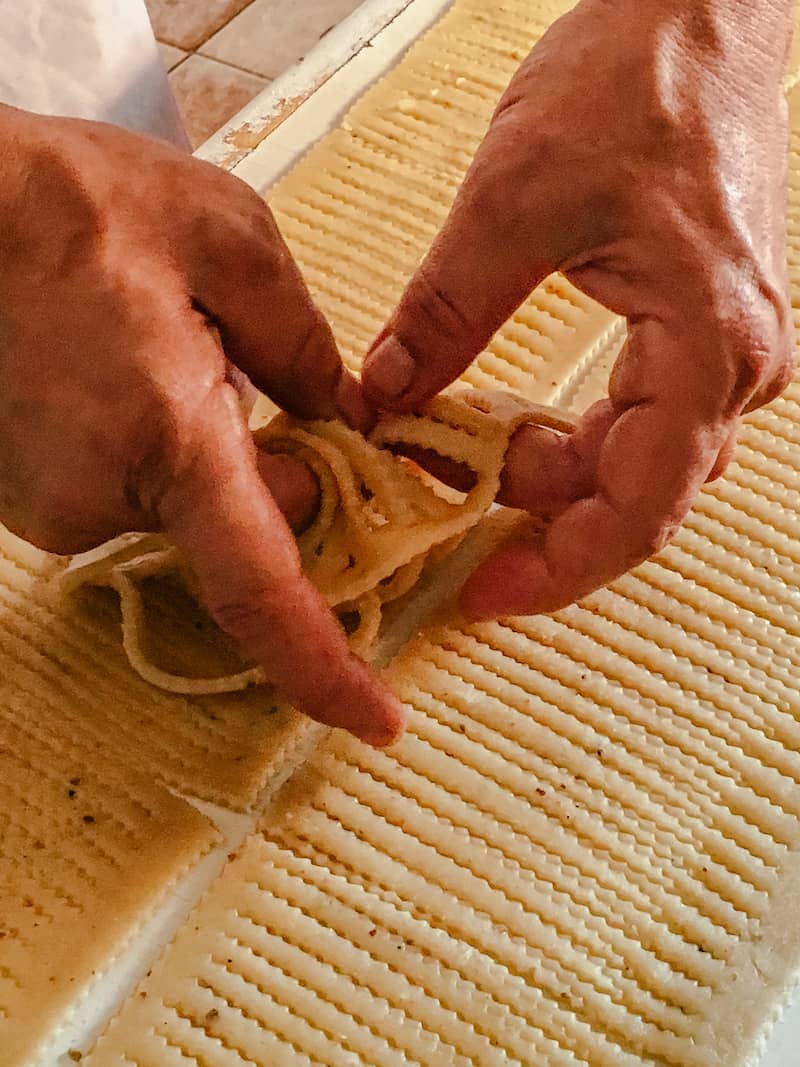 Take a rectangle, and thread the middle finger of your right hand through alternating strips of dough. This enables the rectangle to drape over your finger.

With your left hand, pinch together the outer corners of dough which hang over the tip of your finger. This will form the center of the flower shape.

While holding the pinched corners with your left hand, allow the strips of dough to slide down off your right finger while gently turning them inside-out around the pinched portion.

Gently pinch the opposite corners closed once the dough is turned inside out. If done correctly, you'll have formed the dough into an elongated flower shape. 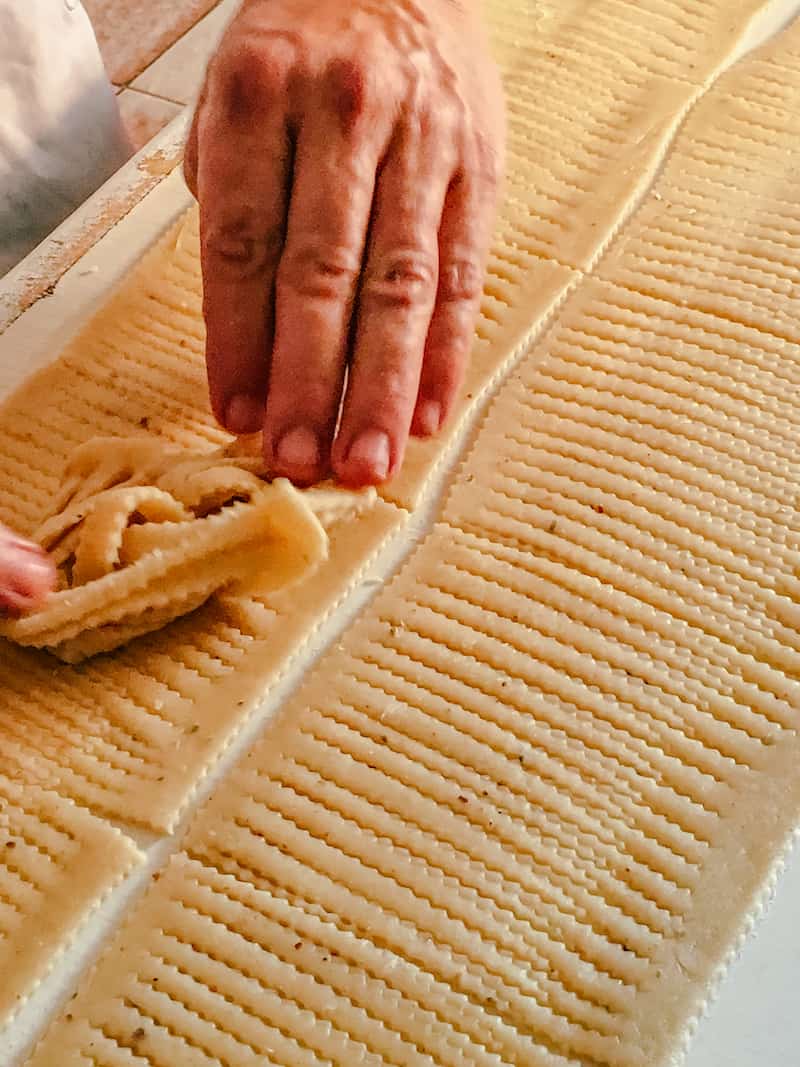 Place the folded piece of dough on a baking sheet or tray.

Repeat the process with the remaining rectangles and mounds of dough.

Gather together the scraps of dough as you work, mold them together into a mound, and return them to the bag to rest before you try rolling them out again.

Use up all of your dough in this manner. Cover the trays of folded dough with a towel until ready to fry. 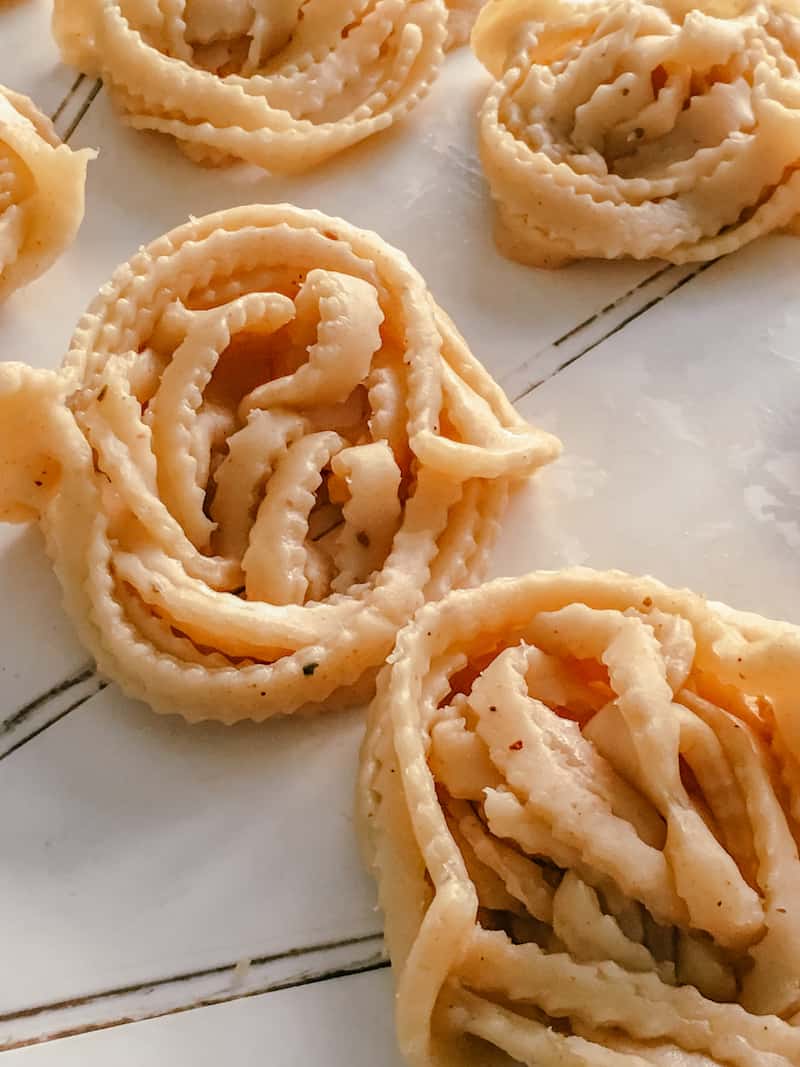 Heat one inch of oil in a large, deep frying pan over medium heat.

At the same time, heat the honey almost to a boil in a large pot. When the honey is frothy but not bubbling, add the orange flower water to the honey and turn off the heat. 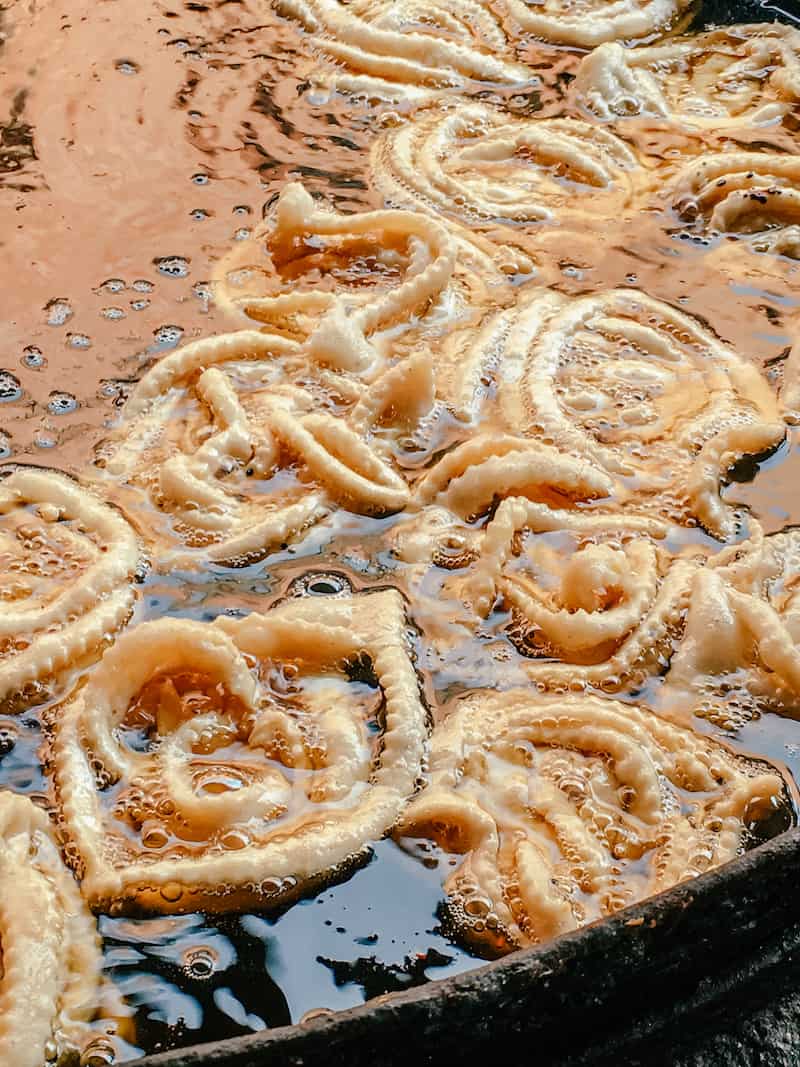 When the oil is hot, cook the chebakia in batches. Adjust the heat as necessary to slowly fry each batch of chebakia to a medium brown color.

This should take about 10 minutes if the oil is the correct temperature. If the oil is too hot, the chebakia will color quickly but the insides will not be cooked crispy.

Soaking the Chebakia in Honey 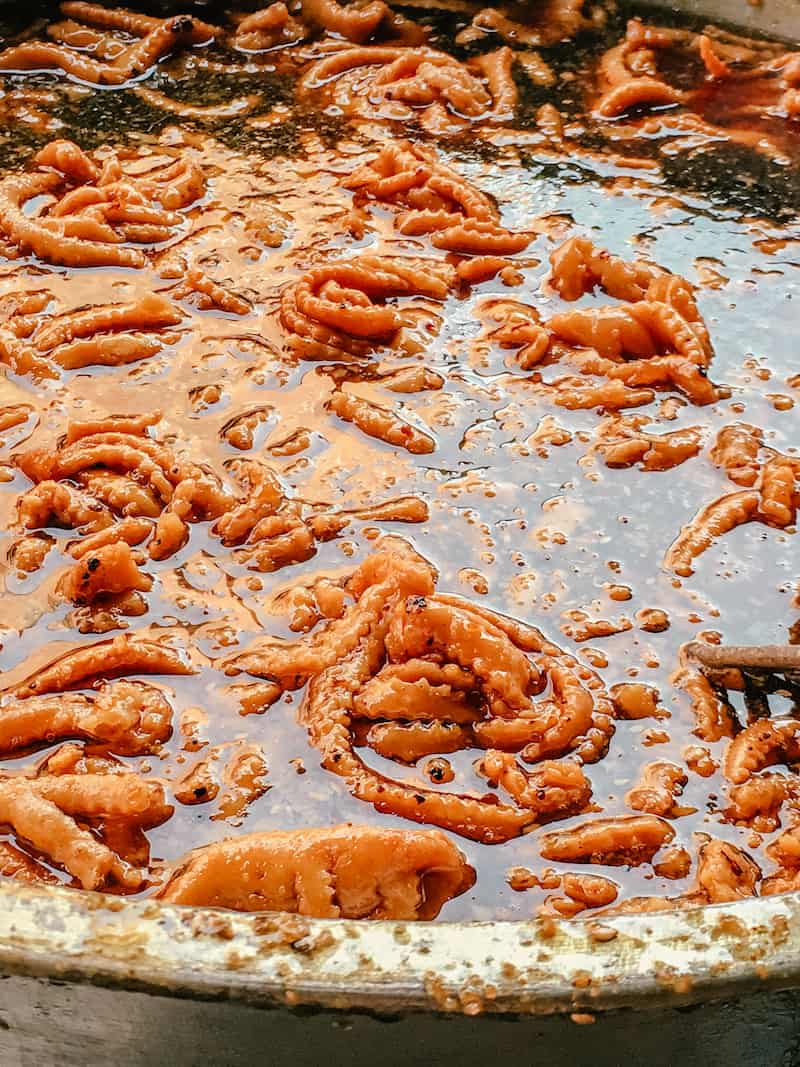 When the chebakia are cooked to a medium golden brown, use a slotted spoon or strainer to transfer them from the oil directly to the hot honey.

Gently push down on the chebakia to submerge them in the honey, and allow them to soak for 5 to 7 minutes.

They'll turn a rich, glossy amber color as they absorb the honey. In the meantime, you can begin frying another batch of cookies.

Note: The longer you soak the chebakia, the more honey they will absorb, and the sweeter and less crispy they become. How long to soak them is a matter of personal preference. However, too short of a soaking will result in pale-colored chebakia that eventually lose their glossy coating.

When the chebakia have finished soaking, remove them from the honey to a strainer or colander, and allow them to drain for only a few minutes.

Gently transfer them while hot to a large platter or tray, and sprinkle the centers with sesame.

As you finish soaking other batches of chebakia in the honey, simply drain and add them to the platter in a mound, garnishing each batch with sesame.

While the shape is "the" shape of the cookies, if you go with a different shape it won't make them less delicious!

If these Moroccan Ramadan Cookies feel a bit out of your comfort zone, opt for something a little easier.

This recipe has been featured in Twinkl, as part of their Quick and Easy Ramadan Recipes from Around the World blog‘.

oops you're right - I mixed around my numbers!