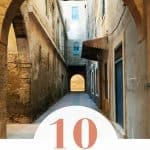 People are often worried about offending people when they visit Morocco. I think this is a common fear when we travel somewhere new, especially if the culture is very different from what we’re used to. Often times what might WE might think offends locals is actually not offensive at all.

Truthfully very few Moroccan people would ever say anything or act offended if you made a slip. If however, you simply want to avoid that discomfort, I put together this list of “faux pas’” to avoid when you visit Morocco.

I remember noticing tourists bargaining so hard on some purchases that it actually was insulting and impractical for the shop owners to sell at those prices. There is a culture of bargaining in Morocco and for those of us who come from countries where that does not exist, we can be confused by how it works.

It’s also pretty common that sellers will set higher prices for tourists. Yes, you should bargain, it’s part of the culture but do so with respect and understanding. You want to pay 100 dirham for a handmade leather bag? That’s just rude. Bargaining in such a way is not clever. It’s insulting. 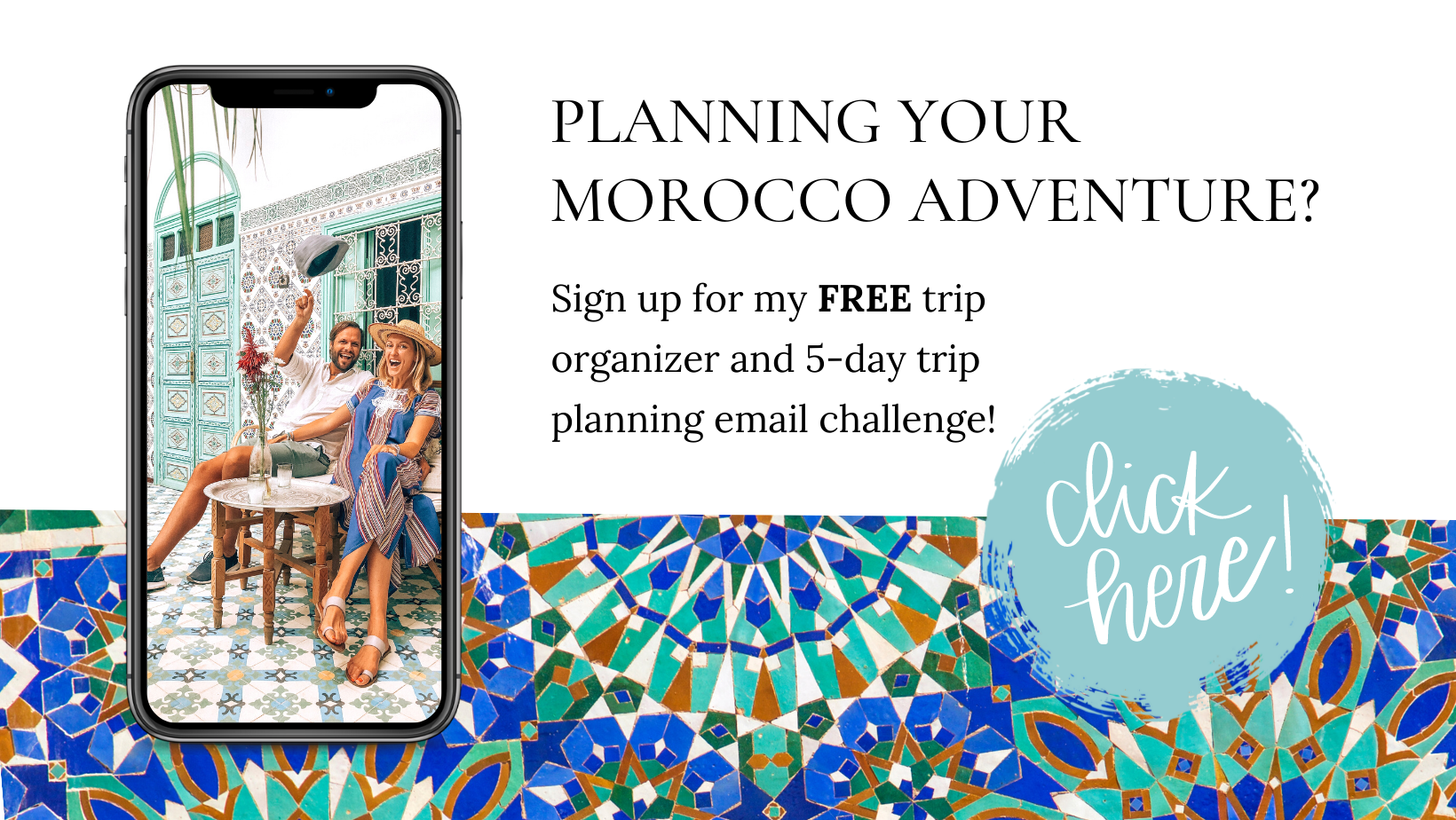 I see a lot of tourists acting like they’re always on the lookout for scams and being taken advantage of in every single interaction. Not everyone is out to get you! Often times people do genuinely just want to be nice.

For example I was recently on the train from Casablanca to Marrakech by myself with a suitcase, bag and purse. The gentlemen, who fit every stereotype of “the bad Muslim guy” on TV and in movies couldn’t do enough to be kind.

A lot of people plan their visit to Morocco during Ramadan – often times they have no idea it’s Ramadan. Whether you decide to come during this month or not it’s good to do a little research and find out what Ramadan is and what it means for your visit. You shouldn’t assume that things will be business as usual. Many schedules change, activities are altered, things are closed, and people tend to be a little more on edge. Do due diligence before you come so that you are prepared.

Ooops #4: Being Annoyed by “the singing” at 5am

It’s not singing, it’s the call to prayer (adhan) and it happens 5 times a day; the first one is quite early. If you’re staying in the medina of any city you’re going to hear it. There is a mosque on almost every corner so it’s unlikely you will find somewhere to stay that you won’t hear the adhan – that’s the point!  Best advice? Embrace it! After a few days you probably won’t even notice it.

Moroccans are very loving – in private. It’s very uncommon and frowned upon to show a lot of affection in public. Holding hands in Morocco is fine. A hug here or there, and a stolen kiss are all fine in most situations. But, making out in public – is absolutely not ok.

You’ll certainly get some clicking tongues and sideways looks. The same can be said for hands wandering anywhere on each other’s bodies. The more rural you are the more frowned on public displays of affection are.

Best advice? Save your amore for behind closed doors. Want more info? I have a full post on PDA in Morocco.

I have been on the receiving end of snap-happy tourists. You will see things that you may not have ever seen before. People DO dress differently, and maybe even act differently. It’s never ok to take a picture of someone without their permission. This is especially true of women who are wearing a veil and men wearing beards. People who are more religious tend to not want photographs taken.

Taking Photographs (or not) in Marrakech

It’s also really important for visitors to know it is not ok to take pictures of police officers, military personnel, or palaces. Morocco is very serious when it comes to national security and these are major no-nos. If a police officer sees you take a picture of him/her don’t be surprised if they come to you and request you immediately delete the image. If you’re not sure you can take a picture, ask.

Drones are illegal in Morocco. Period. Even small toy drones are illegal and the authorities are very serious. We recently had some guests who had brought a camera drone to take pictures. They were flying it and the police showed up immediately.

The drone was taken and the man flying it was promptly escorted to the police station where he was held all day. They released him for the night but held his passport so he would return the next day. He had to go to court, was heavily fined, and had the drone confiscated.

Ooops #8: Not Covering Up

Truth: You can wear whatever you want in Morocco, there’s no “Morocco dress code” – but that doesn’t mean you should. You certainly do not need to dress like locals, nor should you, but be mindful of local norms. Women – booty shorts, cleavage-bearing or crop tops and see-through items are not a great idea.

If you do choose to dress more revealing please don’t wear a scarf on your head. This is more disrespectful than simply wearing nothing. Men, wear a shirt and long shorts; aside from young or teenage boys you will rarely see Moroccan men wearing a tank top or shorter, sport-style shorts. 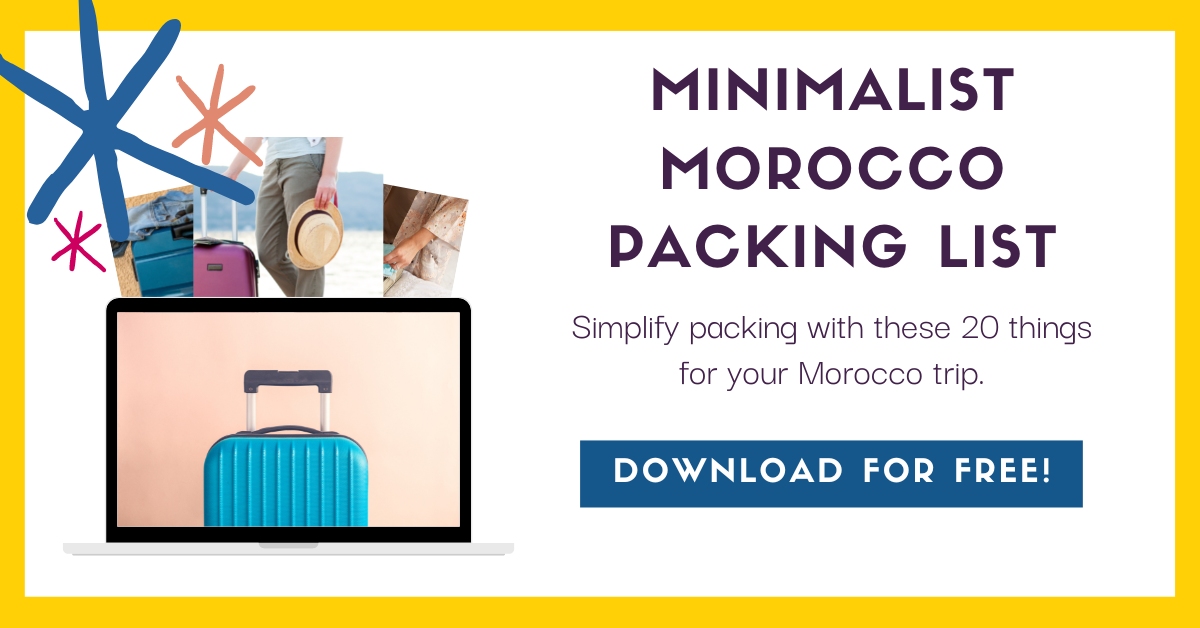 Ooops #9: Expecting Everyone to Speak English

Moroccans speak a lot of languages. They’re very gifted when it comes to this but you shouldn’t assume everyone does speak English. Instead, ask! Arabic and French are spoken by almost everyone. Simply say;

If they speak English they’ll switch for you. If they don’t, they’ll say no and you can move on! One other little note speaking louder or enunciating doesn’t help someone who doesn’t speak English it just comes off as rude!

It also would be wrong to assume everyone speaks French (they don’t!) One of the comments that I cringe most often when I hear is, “but you live in Morocco and you don’t speak French?!” Yes, many people do speak French but Arabic and the Amazigh (Berber) languages are the languages spoken by most everyone.  Want to learn more? Here are a few words that can help you get started!

10 Words You Should Know: Tashelheit

It’s important to realize that Morocco is a large country with over 30 million people. What is and isn’t ok will vary a lot depending on where you are and the company you are with. I do hope that these “mistakes” are something you keep in mind when you visit but also be sure to take clues from the people around you or ask if you’re unsure about anything!

Avoid Getting Sick in Morocco

What to Wear in Morocco

I am glad some people have good experiences. Mine hasn't been good so far and I won't be returning to Morocco again. In fact, a young Nigerian couple on honeymoon is cutting their trip short because of the people. Morocco is the only place I have visited that I tried to move my return date so that I can leave earlier than planned.

I'm so happy I found your 10 mistakes list. I am planning to go to Morocco In June or July and I now know what not to do. I'm traveling by myself and need all the help I can get. Thank you again. 😊

@Tammy, agree so much! My husband and I are going in June with our 20 year old son. Should be fun!

Apologies - in the email just posted I made an error in my last sentence. It should have read: “When it feels appropriate to give a gift, what might be suitable as a gift from us reflecting our own culture and something which RESPECTS our neighbours’ culture”. (ie 'respects' not 'reflects')

@Amanda Mouttaki, We will have the privledge of eating a meal with a family in Erfoud. What can I bring them as a hostest gift? Marijean

I think give as you feel comfortable and they will do the same. It will be a constant thing, because that's just how the culture is. It doesn't have to be something huge or something you always do but I would say not to expect it will stop. It's VERY common to gift food - you might give them some baked cookies? You don't have to always give something back right away as a thank you. Hope that helps a little. What a beautiful little friendship!

Hi, I was interested in reading your list of 10 mistakes people can make in Morocco and wonder if you can give advice on a matter of social etiquette. My husband and I, (both English by birth), live in Southern Spain and via their children, we have become reasonably friendly with a Moroccan family who are near neighbours. We sometimes show the children small kindnesses and in return have been given some gifts in return, including today a very generous portion of a delicious cous cous dish. What would be an appropriate way of showing our appreciation without embarking on a constant return of gifts between us? When it feels appropriate to give a gift, what might be suitable as a gift from us reflecting our own culture and something which reflects our neighbours'. Thanks for any advice you might give.

Hi, I think your post was so informative... especially for a first time traveler to Morocco. I have a completely different question. I have been researching Morocco, and I am very interested in glamming in the Sahara. Can you get there any quicker than 8 hour drive from Marrakech?

Question, my clients are headed to Morocco for a year or so. Is wearing fur frowned upon in society? Thanks.

You can fly from Marrakech to Zagora but the flight isn't everyday. Aside from this it's just the long drive. You can also do glamping in the Agafay desert which is 45 min outside Marrakech but isn't the rolling sand dune kind of desert.