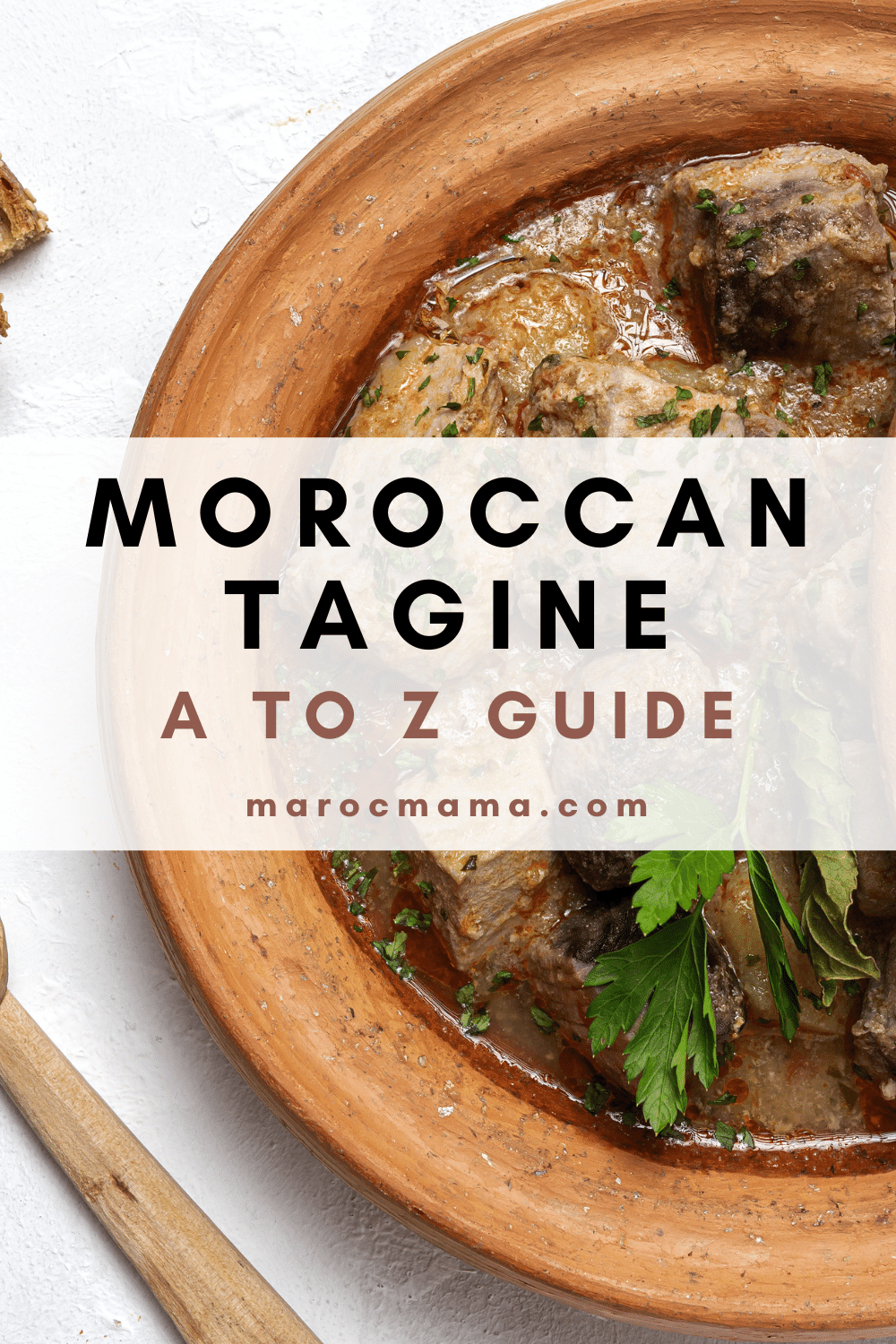 Do you love tagines but are left wondering how to make tagine? Maybe you’ve been to Morocco and tasted a tajine or to a restaurant where it was on the menu. The flavors and combinations can seem difficult to replicate but the truth is – it’s a lot easier to make a Moroccan tagine at home than you think.

I started cooking Moroccan food shortly after my (Moroccan) husband and I married and made a LOT of mistakes. But before I really got into cooking actual recipes, learning about the actual cooking vessel was important.

The word tagine meals both the food that is inside the pot as well as the pot that is used for cooking. You can have a Moroccan tagine that is not cooked inside a tagine pot, you can also use a tagine pot to cook other dishes.

What is a Moroccan Tagine

A tajine is two things; first, it’s a two-part clay vessel. The bottom is a flat dish shape with a lip. The top is a cone that fits snugly on the lip of the bottom piece. There is no hole or ventilating feature.

Secondly, it’s the food that is cooked inside of the pot. Both refer to the same thing and this can be confusing. There are many, many different varieties of tajines.

Is There a Difference Between Tajine and Tagine?

Nope! There are two different ways that you will see the word spelled and both are correct. So whether it’s a tagine or tajine it refers to the same thing.

How to Use a Tagine

The very first thing you need to do with a new tagine is to prime it. This is only required if you have a clay tagine. Cast iron or other types of tagines do not need to be primed. Click this link to learn more about priming your tagine.

Using a tagine is as much learning how your tagine works as anything else. The best and most common way to use a tagine pot is on the stovetop. You should always use the lowest heat possible to avoid cracking and also to cook the contents slowly and evenly.

You can’t keep the heat too low so for your first attempt I suggest starting as low as possible and planning for it to take a longer time. Better to have a longer cooking time then a broken or burnt tagine.

If you’re using clay then you’ll want to invest in a diffuser. This isn’t really required with gas stovetops however it’s a small, extra investment to make that can help. If you have electric heat, you absolutely need to use this. 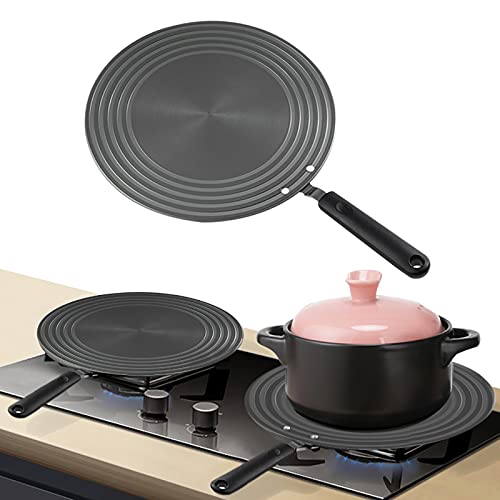 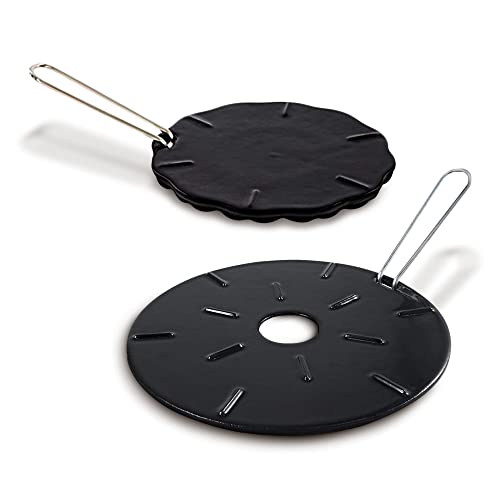 Tips for Cooking in a Tagine

Planning to use a tagine to cook your tagine? Great! There are a few tips that you can take into consideration to make your cooking experience great.

Tip 1: Depending on the material of your tagine, the cooking time will vary. If you are using a traditional clay tagine it will take a different amount of time then a cast iron tagine. Likewise what and how much is inside will also make a difference. As you use your tagine you’ll learn how to gauge how long it will take to cook.

Tip 2: Don’t overfill your tagine. This is really important. If you have too much in your tagine it will not cook evenly. The bottom will burn while the items on top are still raw or barely cooked. There needs to be enough space that the air and liquid can circulate.

Tip 3: You must use liquid – but not too much. Without liquid your pot will crack. It is really important that there is always enough water to cover the bottom of the pot. You can use broth or you can use water but make sure there’s something. Conversely too much water will lead to a tagine that lacks flavor. When everything is cooked you want a thick, almost gravy like liquid remaining.

Tip 4: Don’t use soap when cleaning! When you’re all done eating and it’s time to clean your tagine don’t use soap, especially if it’s a non-glazed clay tagine. The soap will soak into the clay and then your next tagine will be soapy. To clean it soak it well. You can even add some water, a squirt of vinegar and put it back on low heat. It should break up any residue that’s gotten stuck. Once it’s cooled rinse again with water.

How Long Does Tagine Take to Cook?

How long it takes a tagine to cook depends on several different factors;

These are just a few things that can affect how long a tagine takes to cook. When combined it can lead to several different factors. It will generally take a minimum of one hour and up to four hours or even more to cook a tagine.

The key factor is that you need to have the meat at a point where it is falling apart, you should not need a knife or fork to eat the tagine. You also want to have enough liquid at the bottom to be a thick sauce, not quite as thick as gravy but close. It should not be watery.

If these two things are met then your tagine is done!

How to Cook a Tagine Without the Pot

The traditional way of cooking this dish is in the tagine pot. However, even in Morocco, many people don’t cook this way regularly. Pressure cookers are often the way that the dish is prepared as they are much quicker and require less tending.

If you do use a pressure cooker the cooking time will change depending on how much food is in the pot, the type of meat you’re using, and how much pressure your pot builds.

You can also make tajine in a slow cooker or instant pot, however, I find that you have to be careful as many times you’ll end up with a watery, basic sauce. Reduce the amount of liquid and if necessary pour the liquid into a pot to reduce the rest of the way.

There are no hard and fast rules to this as there are dozens of varieties of tajines that exist. The vast majority have some type of meat + some vegetable(s). The meat is typically a smaller amount.

You also may see meat paired with dried (sometimes fresh) fruits. These tajines tend to have a sweet and savory contrast flavor. Dried fruits are rehydrated when serving usually with the liquid.

Many tajines use generous amounts of olive oil and onions as well as a mixture of spices that varies depending on the meat being used.

Getting Started Cooking with a Tagine

How to Prepare a New Tajine

Finding the Best Tajine Pot for You

Which Size Tagine Should You Buy?

Cooking a Tajine on a Grill