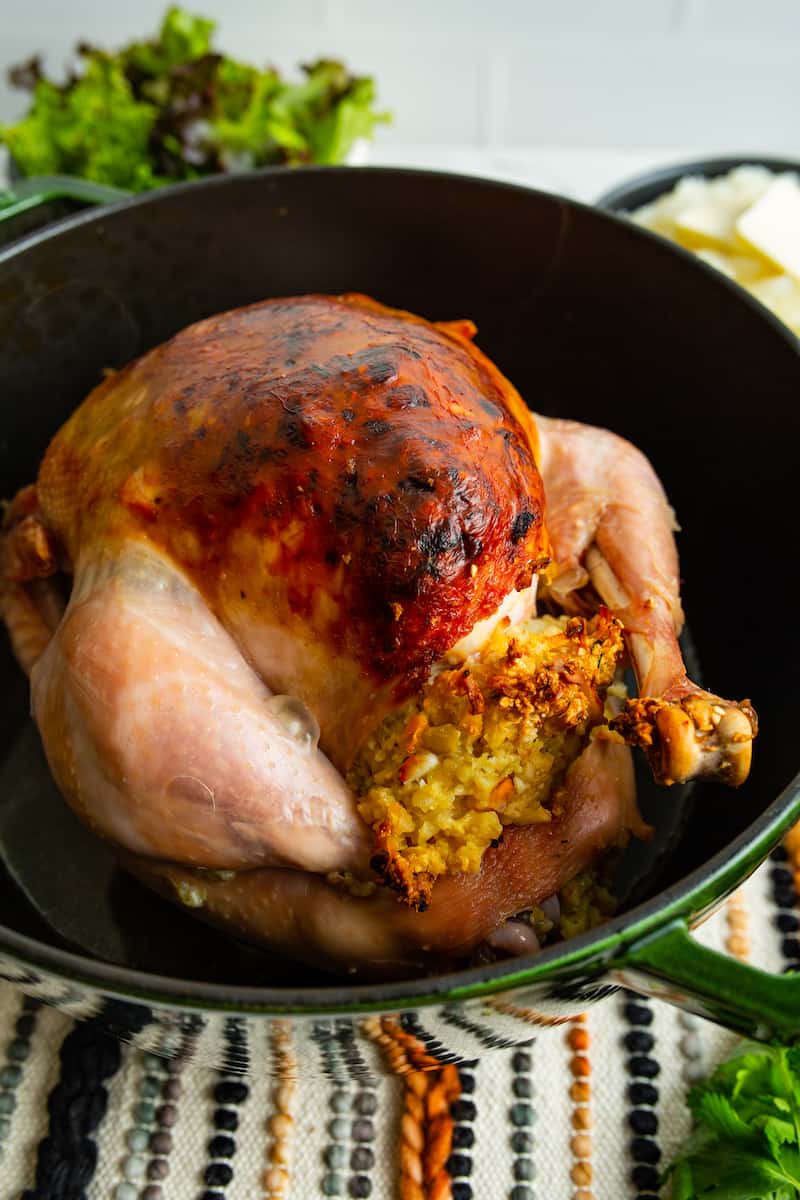 One of my first “homemade” Moroccan meals (before that time I had eaten in Moroccan tourist restaurants that were bad!) was a roast chicken stuffed with spices and vermicelli noodles.  To this day it still is one of my favorite things.

But, I also don’t like making the noodle stuffing because if it’s not done right they end up with a weird, chewy texture. That’s why this stuffed chicken with matzo was so interesting to me.

Unlike many Middle Eastern cultures, Moroccans don’t have a big tradition of stuffing things. You might find things like stuffed grape leaves, kibbeh, and other stuffed vegetables commonly served in the Levant. They are just not part of the repertoire in Morocco.

What was interesting as I began exploring Moroccan Jewish food is that stuffing food appeared to be more common than with the Arab and Berber dishes. This might be part of historical culture or just what was passed on.  I don’t really know.  This tradition is also seen with dafina, the popular shabbat dish as well.

I cooked this stuffed roast chicken on Sunday when we were being blanketed with nearly a foot of snow.  Everyone was stuck inside and it made perfect sense to me to turn the oven on for a roast chicken. I found this idea in the cookbook I mentioned in my introductory post but strayed from some of the steps and ingredients to fit what I had on hand.  The one thing I did discover in creating this recipe was my love for tarragon.

Seriously where have you been all my life?!?!

I’m so excited to experiment with this herb.

One other note, I made this gluten-free.  The original recipe calls for a matzo stuffing or bread crumbs – you can of course use either or both. I however used Glutino gluten-free table crackers for the stuffing. They resembled the taste of matzo very closely.

If you just want to make the stuffing part you can find the matzo stuffing recipe here. This stuffing works great for a Moroccan-inspired Thanksgiving meal too.

My take on a roast chicken with almonds and matzo stuffing. A play on Thanksgiving flavors and Moroccan Jewish cuisine.

Wash and clean the chicken very well, taking extra care to clean out the cavity. Do not remove the skin!

To Stuff the Chicken

[…] Roast Chicken with Almond and Matzo Stuffing – This chicken couldn’t be easier to prepare.  It’s juicy and everyone will be begging for […]

Bianca @ Confessions of a Chocoholic

This sounds delicious! I don't think I've eaten a lot of Moroccan food, but I know I will like this. I don't cook with tarragon often enough but you are right that it is fun to experiment with it. This was the last dish I made with tarragon: http://www.confessionsofachocoholic.com/pasta/red-wine-pasta-with-shrimp-and-tarragon :)