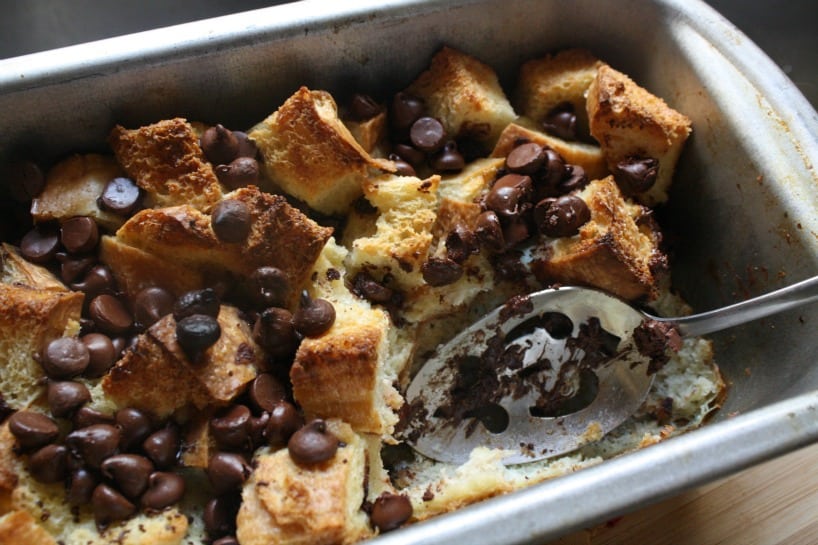 In  Morocco it’s almost unheard of to throw away old bread. Even though it is consumed at least three times a day and there inevitably is bread leftover, it is saved, reused if possible and if not, put into the garbage in a separate bag.  It’s then often fed to animals. Instead of letting these day-old pieces go to waste, why not give them a second life? 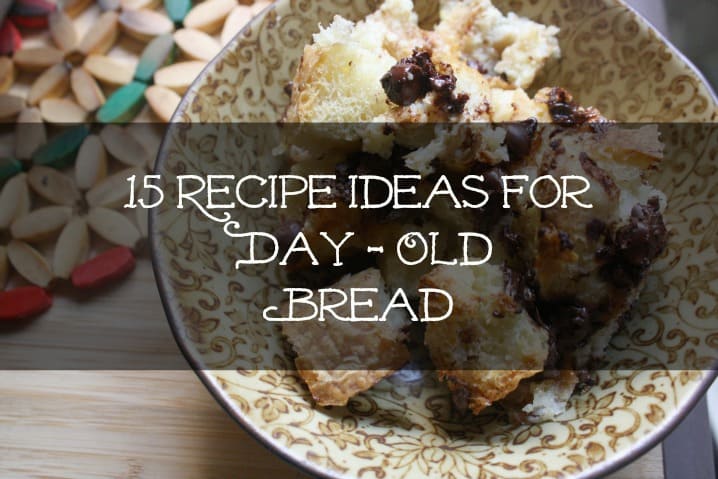 Now, want my recipe for an easy chocolate chip bread pudding?  It’s a great dessert or sweet breakfast for a special occasion.  You might want to double this recipe because everyone at my house was fighting for the last few bites!

Panade with Swiss Chard and Onion from Farm Fresh Feasts

What’s your favorite way to use up day-old bread?

My mom cooked a lot when I was young but this recipe will ALWAYS stick with me and remind me of her. Whenever we had a family get together that involved brunch my mom made this dish.  Smelling it cooking immediately reminds me of Christmas morning when all of my family would come to our house to see all the presents Santa brought.  I’ve always liked this even as a young child.  I’m happy to say it’s also the first “casserole” my husband has liked! It’s really super simple and a great make ahead breakfast because it can be (and should be!) refrigerated overnight.
Ingredients:
9 eggs
16 slices bread without crusts
8 slices of cheese (I use American)
1/4 pound turkey or ham lunch meat
1 stick of butter melted
1 tbsp dry mustard
1 tsp powdered garlic
1/2 tsp salt
1 tsp pepper
1 cup milk
2 cups cornflakes


Directions: Cut off all the crusts of the bread.  You won’t need it for this recipe, but save it and make it into breadcrumbs! 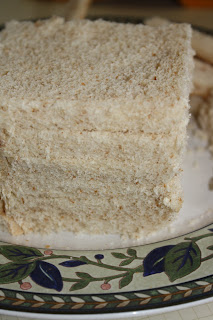 Crack all of the eggs and add the milk to them.  Whisk together.  Add the salt, pepper, garlic powder and dry mustard.  Mix in well. 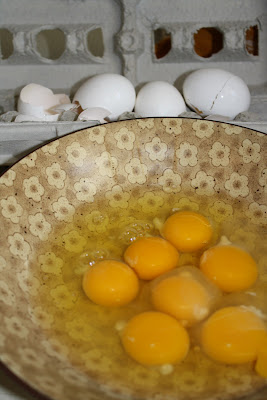 Spray or butter your 9×13 baking pan and place down a layer of bread, about 8 pieces.  You may need to cut them to cover the entire bottom of the pan.  Next begin layering.  Add the meat into one layer.  Then the cheese slices.  Place another layer of bread on top.  (I used cubes of French bread because I needed to get rid of some dry bread!).  Finally pour the entire mixture of eggs and milk on top of the bread.


At this point you would want to cover with plastic wrap and refrigerate overnight. This will allow the egg mixture to soak into all the bread.  If you need to bake right away you can.  Do allow it 30 – 60 minutes to rest before baking.


Before baking top the casserole the the cornflakes followed by the stick or melted butter drizzled over the cornflakes.  Preheat the oven to 375 and bake for approximately 45 minutes. Remove from oven and allow it to rest 5-10 minutes to completely set.  This is best served hot but can easily be heated up and makes great leftovers! 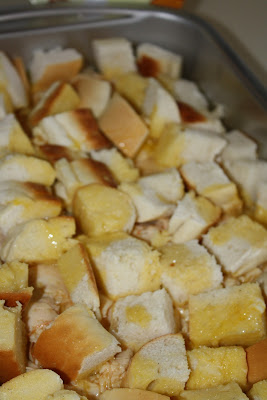 There’s not much baking that goes on in this house.

There are two reasons for that

2) baking usually equals something sweet and generally not good for me so I try to just avoid it altogether.

I promised that I would make something this weekend for breakfasts as my new work schedule has severely limited the time I have in the kitchen.  I didn’t get as much done as I wanted to but I did come up with these beauties.  I like them because they are not overly sweet – in fact I don’t really think they are that sweet at all.  You could add some more sugar if you wanted a sweeter taste.

Make sure to pay attention to these as they near the end of baking.  Overcooking them will make them very dry.  I would add a little more yogurt if you’re worried about them getting too dry.  I also added a crumble to the top of these – you can easily do this by mixing flour, melted butter and sugar to create a grainy consistency (think Moon Sand).

You know what Moroccans eat a lot of? Bread. If you want to make your own Moroccan bread (khobz) at home, today is your lucky day!  The fun thing about this bread is that it’s pretty forgiving.  You can use different kinds of flours, mixtures of flours, rising time and making it into different shapes.  Traditionally it is made into a round and there is some technique to making it the authentic way. 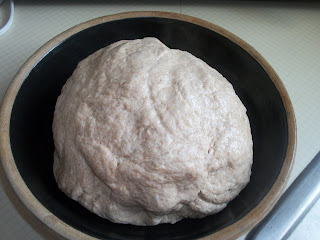 So here we have a ball of dough.  This is ½ whole wheat flour and ½ white flour. The exact measurements don’t really matter. But if you’re just starting try 2 cups of each, along with 1 tsp salt, 2 Tbsp yeast, 1/4 cup warm water and 1/2 tsp sugar. Whisk the yeast into the warm water with the sugar and let it sit for about 5 minutes. Add to the flour and begin to knead adding warm water little by little. You’ll need to mix it for about 10 minutes – if you have a Kitchen Aid mixer it will make things much easier. Turn the dough out into a shallow wide bowl when it’s mixed. I then pour olive oil in my hands and rub the dough with the oil. 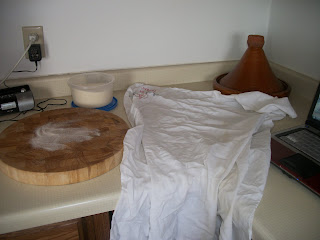 While the dough is rising I prepare my work space.  I use a large butcher block, round wood board to work my dough.  My in-laws have a really large shallow bowl, that looks like the bottom of a tajine.  By large I mean about 2 ½ feet across.  They knead and shape the dough in this, however I have the luxury of a mixer so this is not necessarily.  I also use fine semolina flour on the board to keep the dough from sticking.    Lastly is a large flour sack towel.  One of two of these are used to wrap up the bread once it is made into rounds.
. 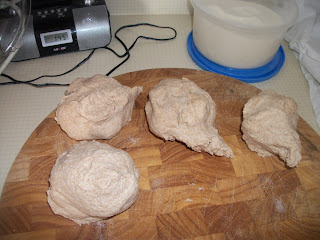 The dough is then divided into balls.  For smaller rounds make smaller balls. For larger rounds make bigger balls.
Preheat your oven to 425F and place the bread onto a baking sheet. Bake until brown on the outside and the dough makes a hollow sound when tapped. That’s it! 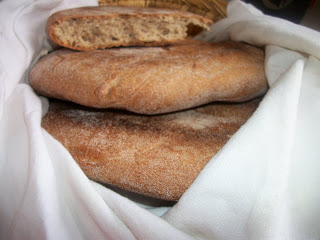 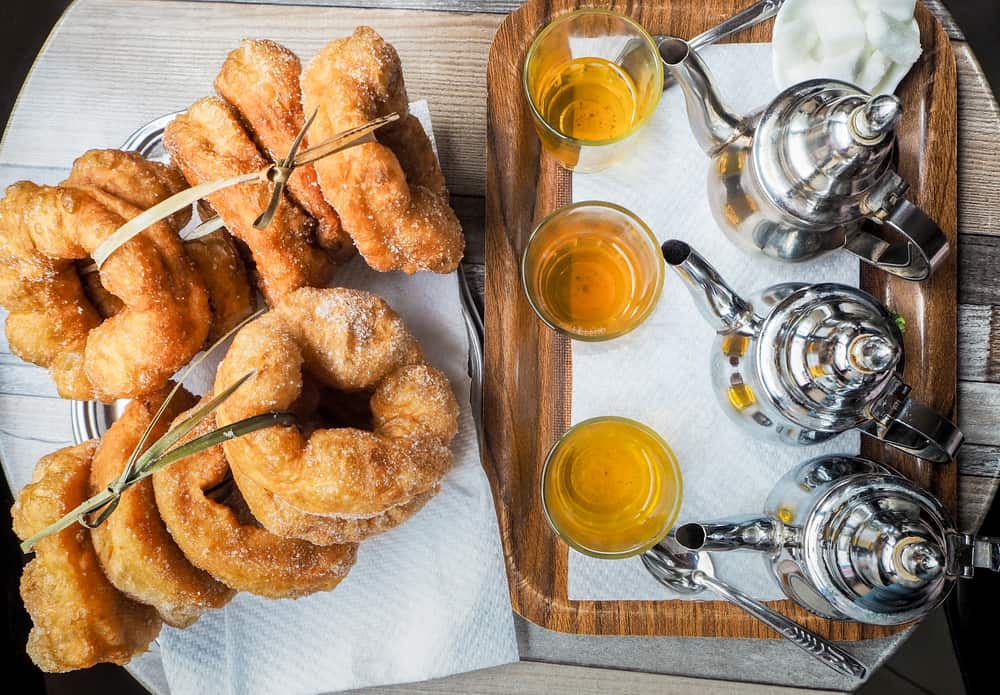 Palm Sunday and reed strings. The first time my husband brought home sfinge I was shocked thinking, “what it’s Palm Sunday and they celebrate it here?” Except wait they get doughnuts with their palms?? Weird! But no it wasn’t that because it was August.
These tasty, delicious doughnuts are sometimes made at home but are often bought from street vendors. Fried dough must be a staple in every culture but just thinking about these doughnuts makes my mouth water. I make them at home now on cold winter nights with a big mug of hot chocolate. Yum! 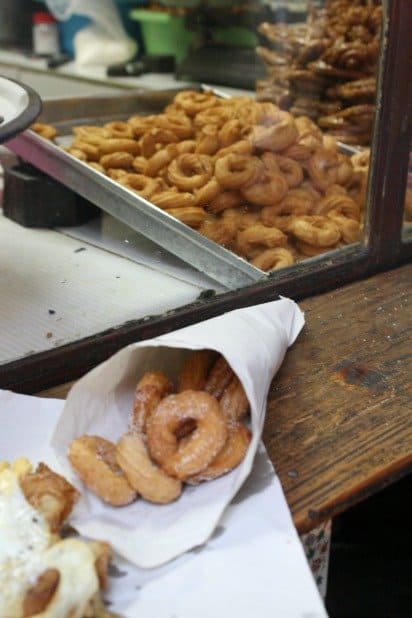 (These are the cousin of sfinge, a smaller denser doughnut known as kringo. Sfinge are bigger and lighter)

1. In a small bowl dissolve the yeast in the warm water. In a large bowl mix the flour and salt. Add the water and yeast mixture, and stir vigorously with your hand or a spoon until smooth. The dough should be too sticky to knead or shape.

2. Cover the bowl, and leave the dough to rise for one to two hours, until double or triple in bulk.In a wide pot heat at least an inch of vegetable oil until hot.

3. Fill another bowl with water and set to the side. You should have three bowls ready. One with your dough, one with water, and a third with sugar.

4. Cover a large plate with paper toweling or a towel. To begin dip your hand in the water and pull off a piece of dough about the size of a plum.

5. Using your fingers make a hole in the dough and stretch into a ring.

6.Place into the oil. Repeat with the remaining dough. Be careful not to crowd the pan.

7. Depending on the size you may only be able to do 2 or 3 at a time. Fry them until golden brown, flipping a few times to make sure both sides are cooked well.

8. Remove from oil and set on plate to drain.

9. Once the extra oil has been absorbed, roll them in the sugar mixture before they cool off.

In Morocco they're rarely rolled in sugar and instead could be dipped in honey. 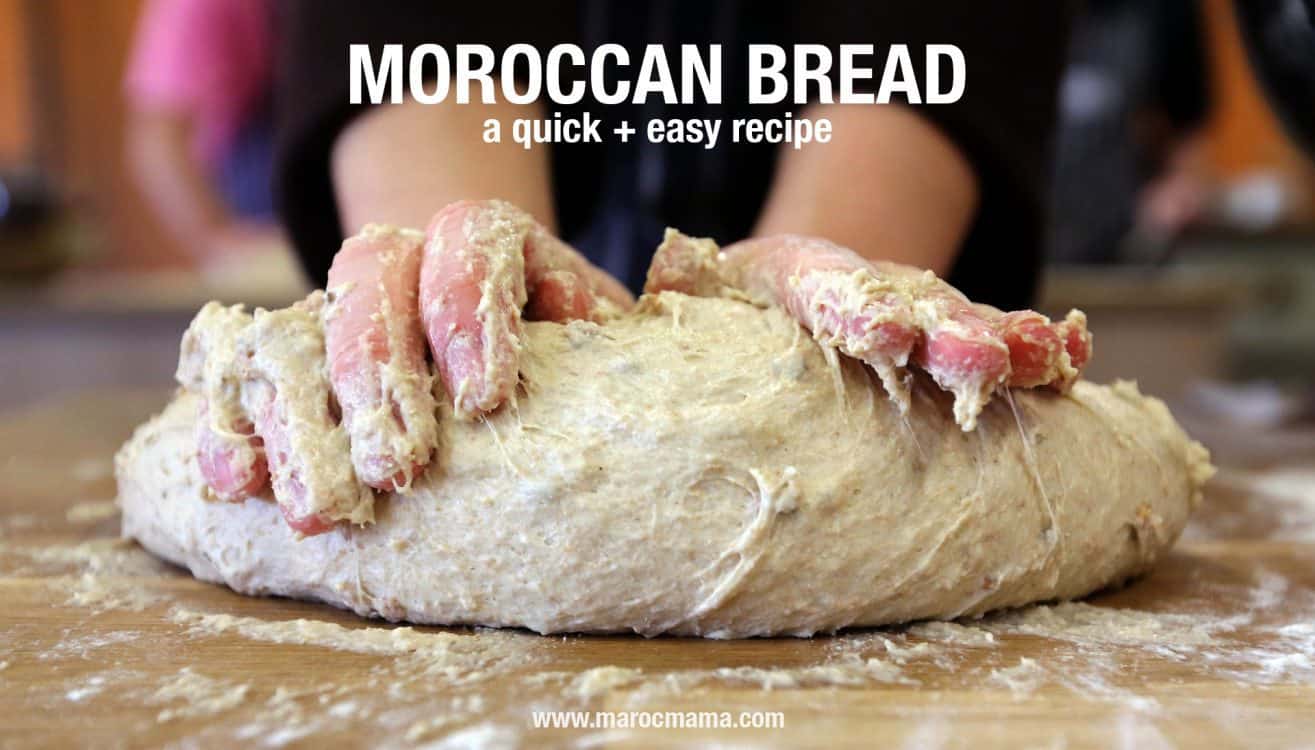 I don’t know if there’s anything more Moroccan than a round loaf of bread. Nope. There’s not. Let’s just say no one in Morocco is going to be doing the Atkin’s diet anytime soon. Bread is so prevalent and ingrained (haha ingrained) in Moroccan culture my husband can not eat a meal without it. And before you say wait, well he CAN he just doesn’t want to – no he really can not.

I used to make bread almost every day when we got married – kneading it and all. Then we got a Kitchen Aid stand mixer and that made it a whole lot easier.

When we moved to Northern Virginia there was so much good bread at a cheap price that we would freeze and thaw bread instead of making it. I spent 2 1/2 years doing that and I really didn’t miss making bread! Now that we moved back to Wisconsin the kind of bread we like is much more expensive and not the same quality so it seems like I will be going back to baking bread again.

My first attempt and baking again went well! You will have to pardon the image as this is actually the “not so good” loafs and they were about a day old. I didn’t get to take a picture when I first baked them because my husband gobbled it up so fast – that’s a good sign though! In reality it’s pretty easy to make and I don’t mind doing it if I have a little extra time. It does dry out quickly so if you are making it to last more than a day, throw it in the freezer after it’s cooled (wrapped up of course). 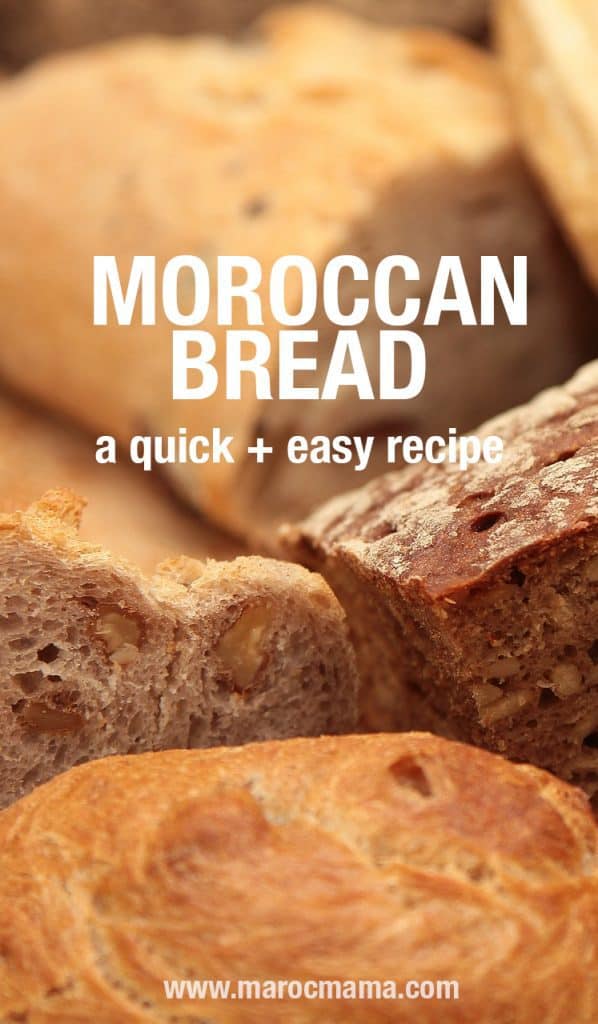