This turkey breast roast is an absolute flavor bomb filled with Mediterranean and Moroccan flavors. Every year I make a “Moroccan Thanksgiving” dinner for my in-laws. It’s one of my favorite food holidays and I really look forward to it. But, every year I adjust and make changes. I can’t get all the ingredients, and my in-laws frankly prefer the flavors they’re used to. Hence the inspiration for this recipe.

A tender and juicy turkey breast slowly roasted in the oven, filled with Mediterranean flavors like saffron, cumin, cloves, thyme, and bay leaves, with Moroccan touches like the delicious spice mix ras el hanout and the most incredible freshness added with fresh mint and cilantro. It’s then served with a beautifully bright yellow sauce made of roasted garlic and saffron.

Don’t get overwhelmed by the number of ingredients. As it’s a roast is extremely easy to make, and it’s one of those meals that look and taste very complex but are really easy to make. It’s all about putting all the ingredients together and letting the oven do the work for you.

This turkey roast is inspired by the Mediterranean and Moroccan flavors and is all well combined in a symphony that sings of delicious memories shared over a table, with good company and conversations.

Because there’s nothing more Mediterranean than sharing a good conversation over a feast of delicious plates after all!

WHAT IS RAS EL HANOUT?

In case you are wondering, ras el hanout is a lovely mixture of spices traditional from Morocco.

It has many different variations and different possibilities. Its name means “the best from the store”, so it is a mixture of the “best spices”.

It can be used in many different dishes, from meat to fish dishes. If you cannot find a jar of this delicious spice mix you can do it yourself with said spices in powder.

To create this incredibly delicious and wholesome turkey roast you are going to need a few ingredients, but, believe me, is going to be well worth it

For the saffron and roasted garlic yogurt sauce:

USEFUL TOOLS TO HAVE ON HAND

To make this delicious turkey breast roast, you might need :

A simple roast turkey that brings together the flavors of the Mediterrnean in a bright, bold way!

While the oven is heating prep the veggies as follows and set them aside:

- Peel the onions and cut them into rings.

- Peel the garlic cloves and cut them in half.

- Wash the green peppers and cut them in half removing the seeds.

- Pit and chop the dates.

On a baking tray put the green peppers, the onion rings, and the shallots as a bed for the turkey breast, as well as some of the peppermint and cilantro. Sprinkle some salt and pepper over them.

Make three cuts onto the turkey breast and put it in the baking tray.

Stuff the cuts with the garlic cloves, thyme sprigs and sprinkle the rest of the peppermint and cilantro. 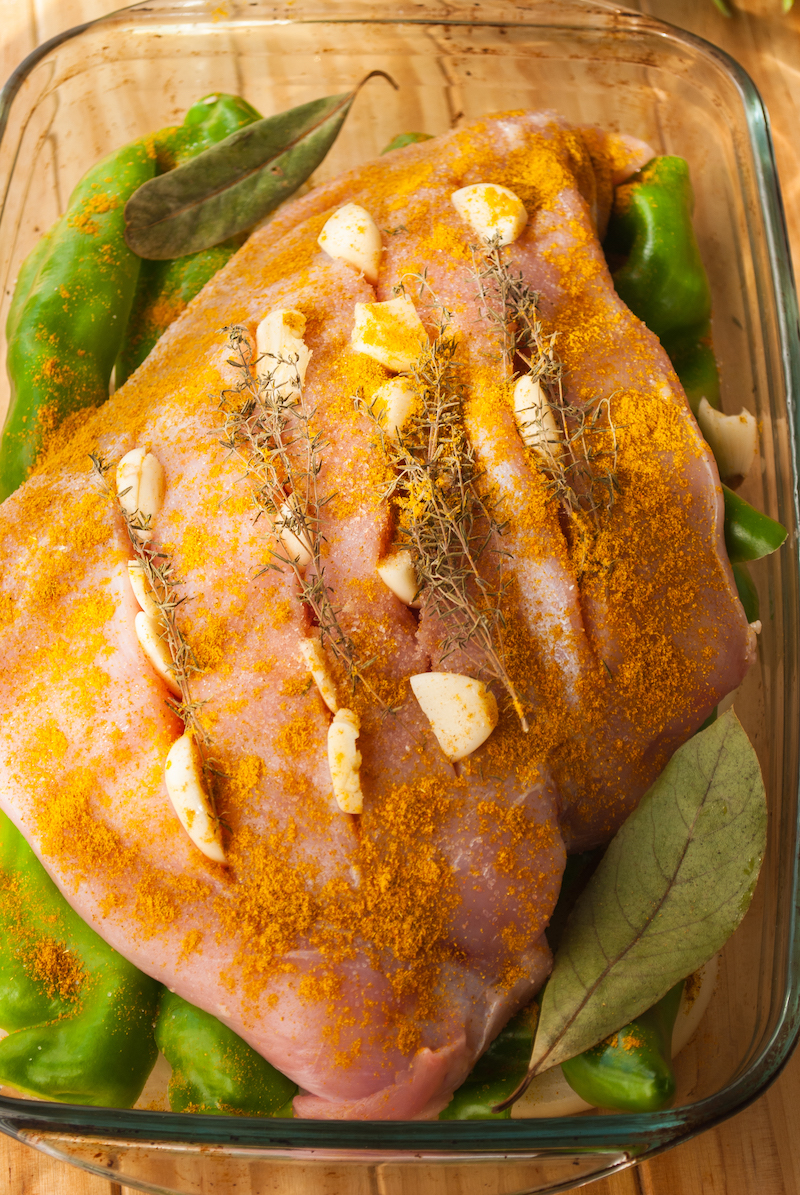 Sprinkle the Ras el hanout and salt on top of everything.

Drizzle the golden raisins and chopped dates all over the baking tray.

Pour the wine and water until at least half of the turkey breast is covered, ideally ¾ (depending on how deep is your baking tray you’ll need more liquid or less) 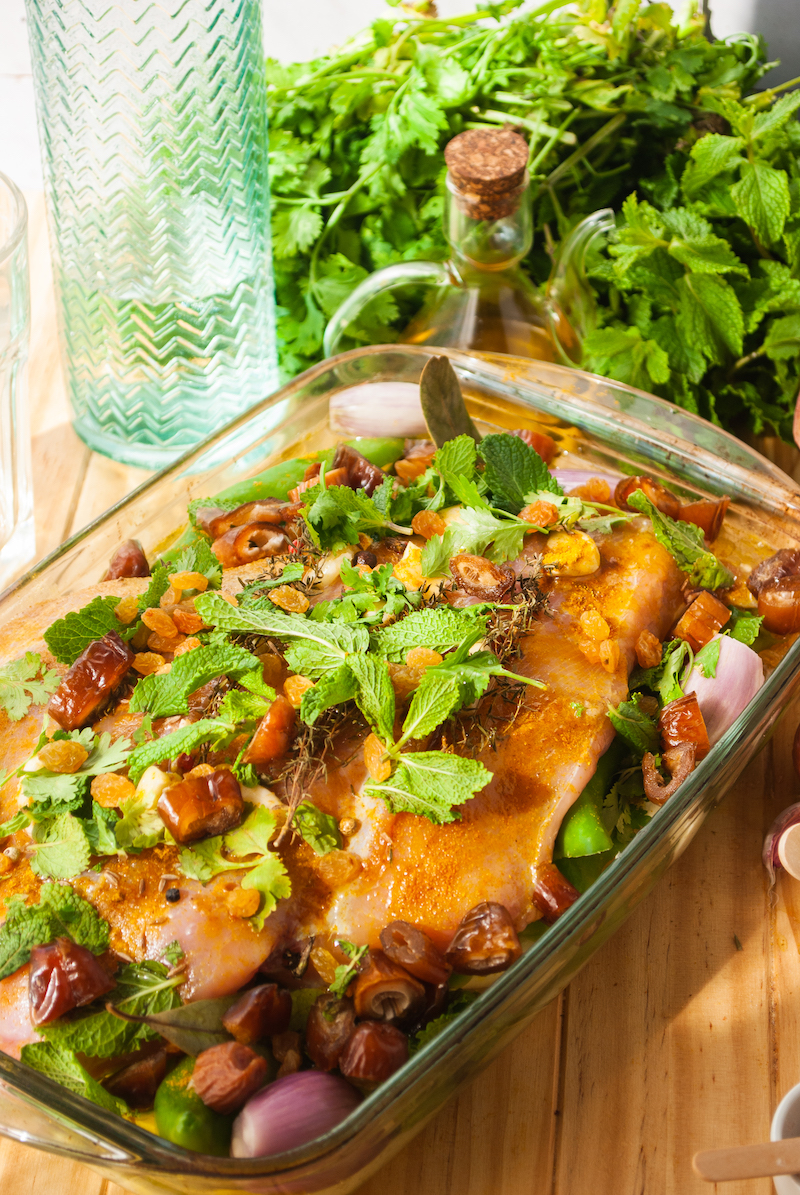 On a second oven rack put the smaller baking tray with water, this water will be evaporated with the heat into the oven, helping to prevent the turkey breast from getting dry.

Every half an hour or so, with a sauce spoon, drizzle some of the whine, water an and spices mix on top of the turkey breast.

Once the turkey breast is golden and done, take it out of the oven. 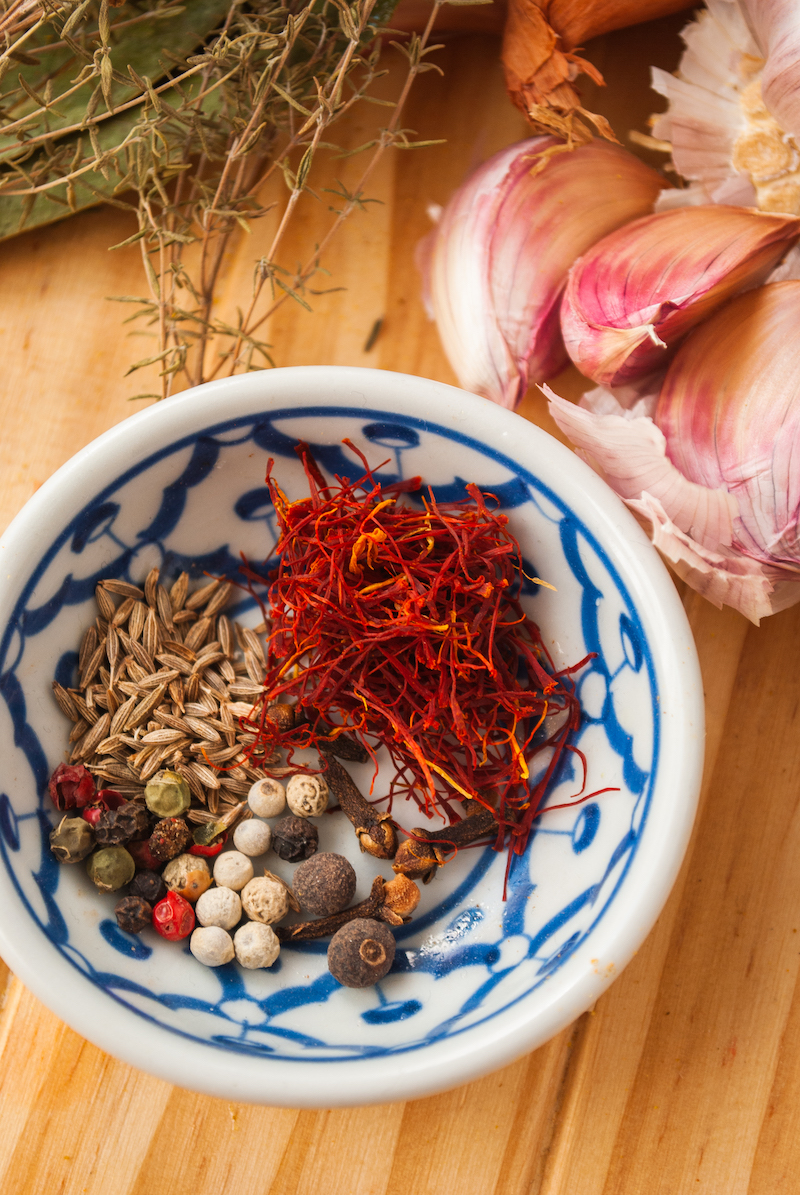 For the saffron yogurt sauce

Put a small pan on low heat and put the saffron threads to roast for a minute or so, constantly moving them around so they don’t burn. Be very careful with this step. Once roasted, set aside.

On a mortar, add the roasted garlic cloves and the toasted saffron threads.

Add a pinch of salt and a small drizzle of olive oil and pestle everything until you get a fine paste.

In a bowl or in the mortar add the yogurt and mix with the garlic- saffron mixture.

Mix well until everything is well combined, taste and adjust salt or olive oil. 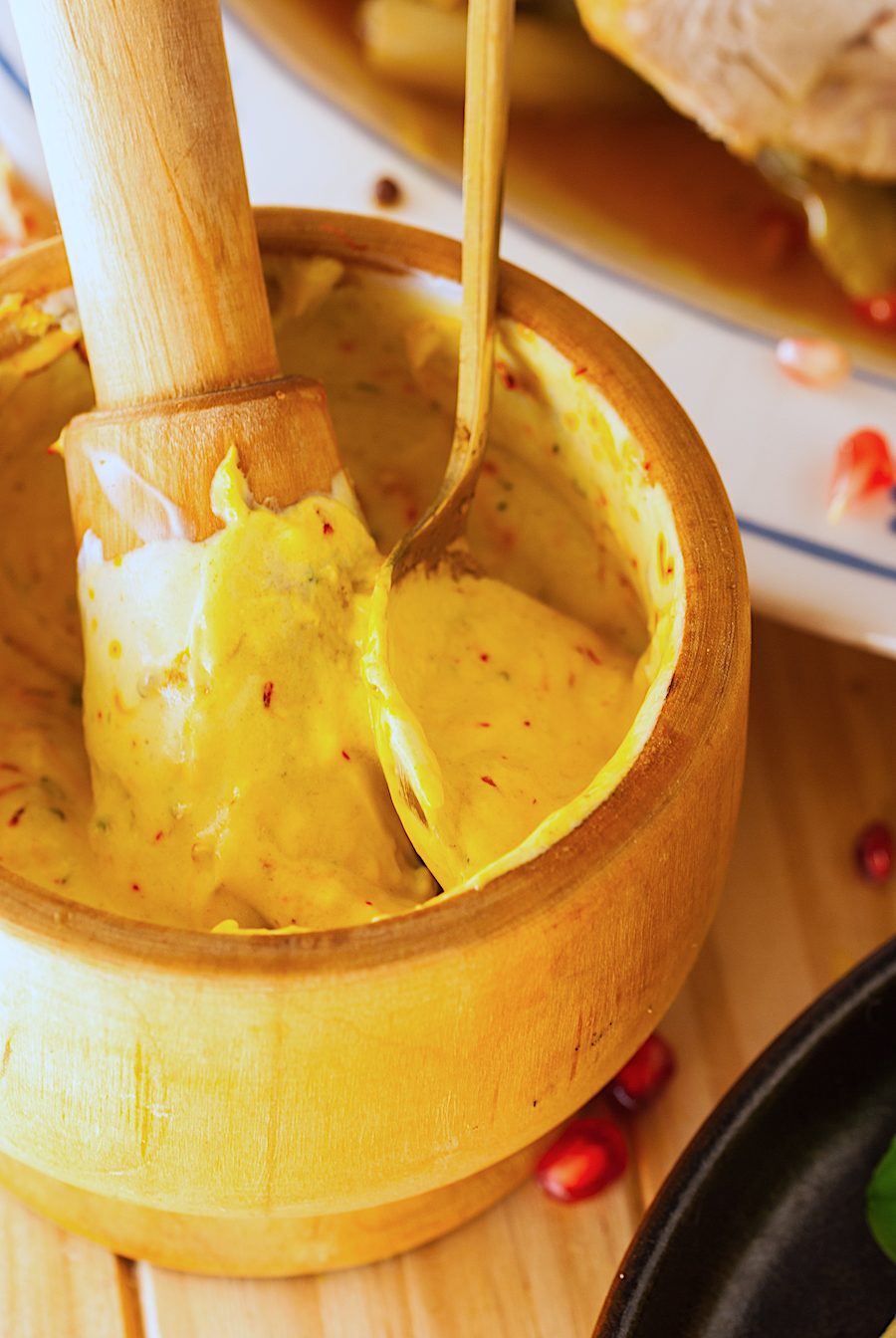 To serve the turkey breast:

On a big serving dish put the roasted green peppers, onions, and shallots as a base.

Put the roasted turkey breast on top removing any charred peppermint and cilantro leaves it might have.

Add the arugula and watercress on the side and drizzle with olive oil and a pinch of salt.

Garnish with chopped pistachios and some pomegranate seeds.

Serve with the saffron yogurt sauce on the side.

To serve it on each plate, cut the turkey breast in slices, with some of the roasted green peppers and onions and some of the arugula and watercress, sprinkle more pistachios, and pomegranate seeds, and enjoy!

The turkey breast can be stored for up to 5 days on an airtight container in the freezer. The roasted garlic and saffron sauce might need to be consumed at a maximum of 3 days.

Why toasting the saffron threads?

Toasting the saffron threads makes them release and amplify their flavor. In case you have saffron powder instead of threads, toasted on very low heat for only 20 seconds, moving it constantly with a spoon.