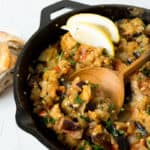 One of the first Moroccan salads I truly liked was a Moroccan eggplant salad called za’alook. Eggplant isn’t loved by everyone and that tends to put off a lot of people when they first see this recipe. But, it was how I learned to like eggplant in more varieties than just fried.

Cooked salads are a big part of a Moroccan lunch, in fact you’ll rarely see lunch served without at least one salad and sometimes there will be as many as five (or even more!)

Preparing this Moroccan aubergine salad is simple, but feel free to adjust the seasonings for your taste. Sometimes we add a bit of chili pepper to give it a little zing. This is just one of many different Moroccan eggplant recipes. If you’re looking for another check out my braniya recipe.

I suggest cubing and soaking the eggplant in salted water for a little while (half hour to an hour) before beginning. Salting the eggplants helps to remove moisture. It also can make them feel less slimy which is something some people dislike about them.

This recipe is naturally vegetarian, vegan, and gluten free! You can eat it with a fork however it’s typically scooped up with bread – the typically Moroccan utensil!

Clean eggplants and cut into cubes for faster cooking. Place in a large bowl and lightly salt to remove some of the excess water. 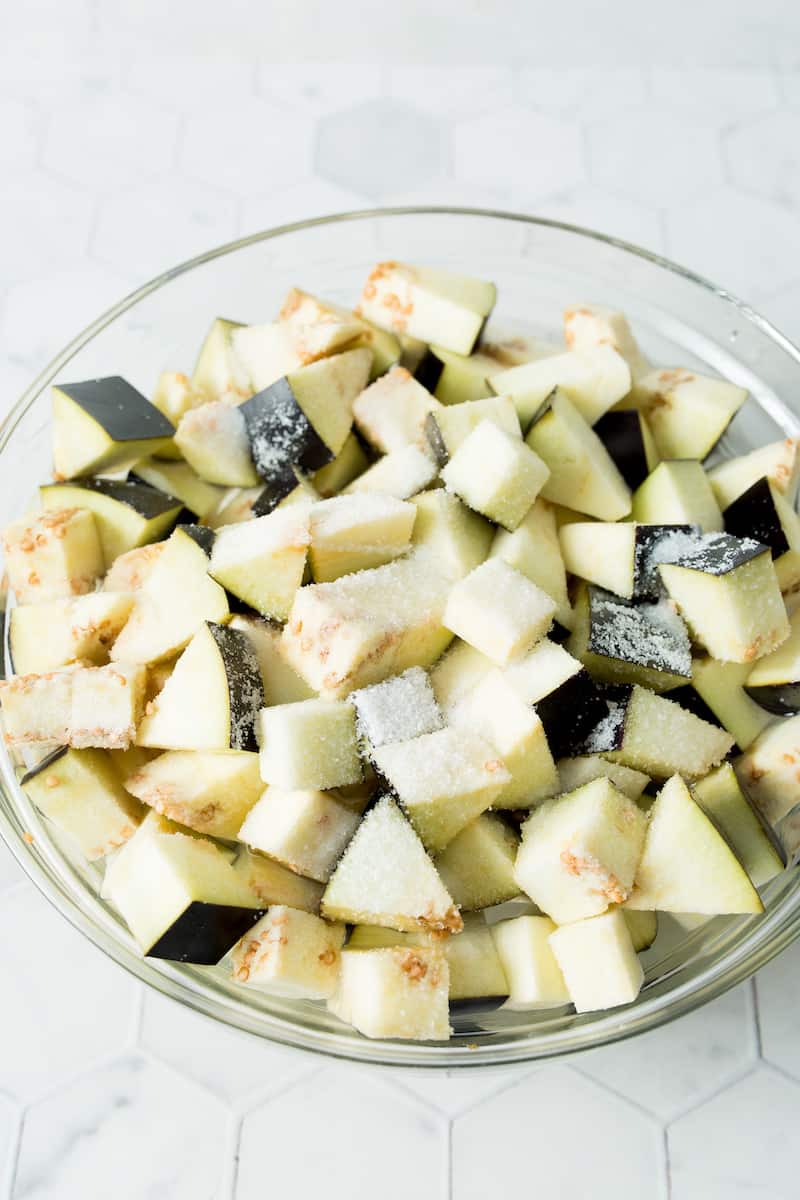 Add a few tbsp oil to a frying pan. Once it heats up add the garlic and onion and cook until softened (3-5 minutes). Add half of each of the spices. 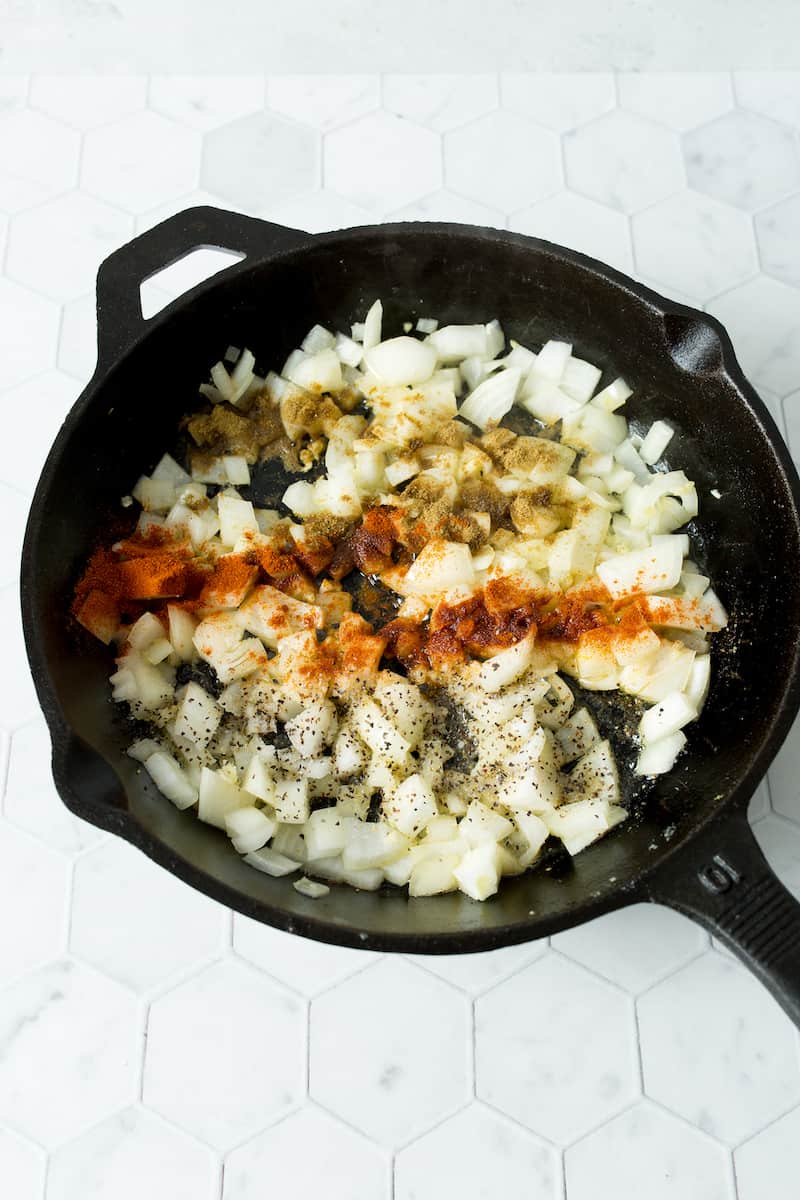 Next include the tomatoes and eggplant. If you want you can add about 1/4 c of tomato sauce to make it smoother. 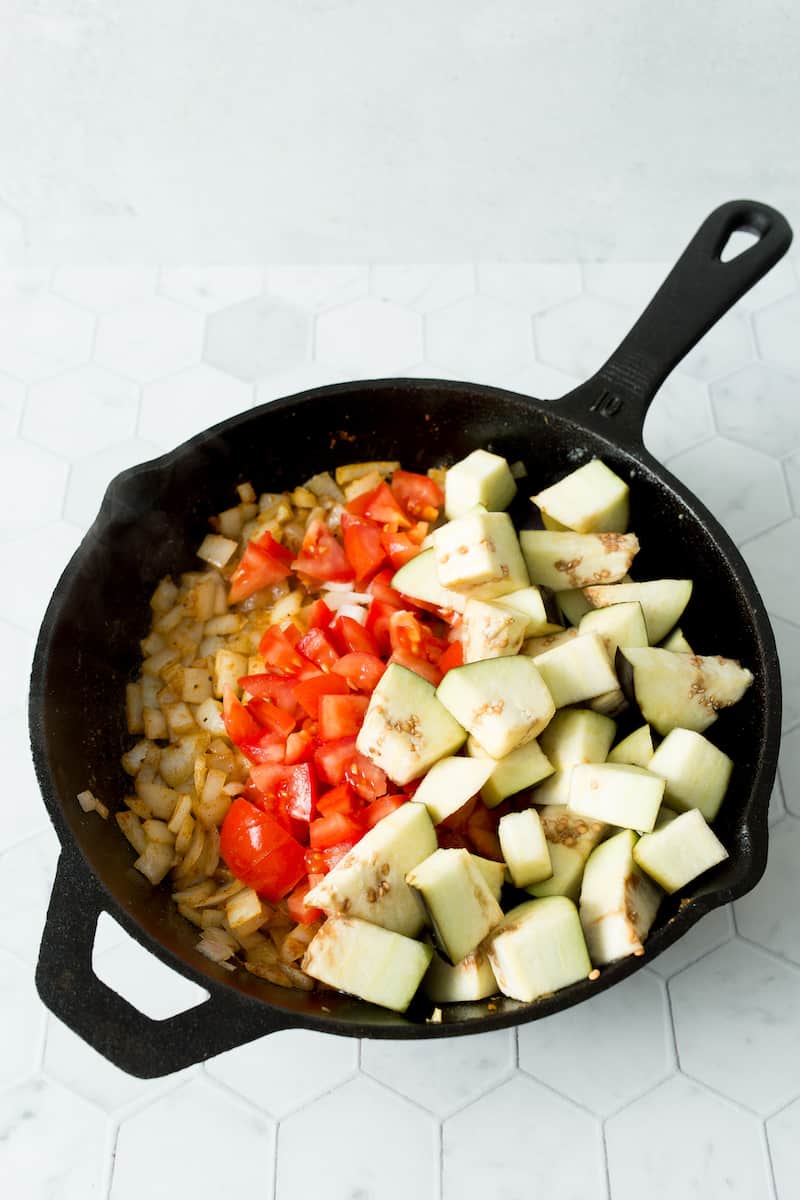 The final result should not be too chunky, as you should cook until they are relatively soft. Some chunks are ok.

Top with a squirt of lemon juice and cilantro

Thank you for sharing. I am impressed by the amount of good Moroccan recipes here. If I may suggest, for the Za'alook recipe, I have tried this method many times before and the taste is always great. Lately, I have started halving the egg plants, then I make cuts to the top bit, then I add some olive oil and salt and roast them for around 30-40mins. I then spoon out the roasted egg plants and add to the cooking onion and tomatoes. I find that this way gives the Za'alook a deep and smoky flavor.

[…] didn’t use this recipe by Maroc Mama, but it is another option for how to make […]

I made this 2 days ago, and it is wonderful! It was a side dish to chickpea and date taking with couscous. I love your recipes - so tasty, I feel my body thanking me for giving it this delicious and nutritious food!!

ps - I live in a village of 1600 in Northern Ontario; much rather be where you are this Winter!

So happy you liked it!

Heaven! I'm so happy I found your blog <3

[…] are funny, because to most people they aren’t really a salad at all.  The first time I ate za’alook or taktouka I just assumed it was some sort of cooked vegetable side dish. The longer I stayed the […]