If you have seen my post on 6 Assumptions People Make When They Hear Your Husband is Arab then you should take another meander through the comment section. I’ve wrestled with whether or not I should shut it down or leave it open. It seems there are a lot of people on both sides needing to clear the air. You can jump over there to see what I mean. One theme that keeps coming up is the issues of religion and culture – it’s complex to be sure but something you will have to grapple with at many points in your relationship. So when you decide to tie the knot the inevitable issue will emerge:

Do you need to understand, adapt, or flat out reject your spouses culture? 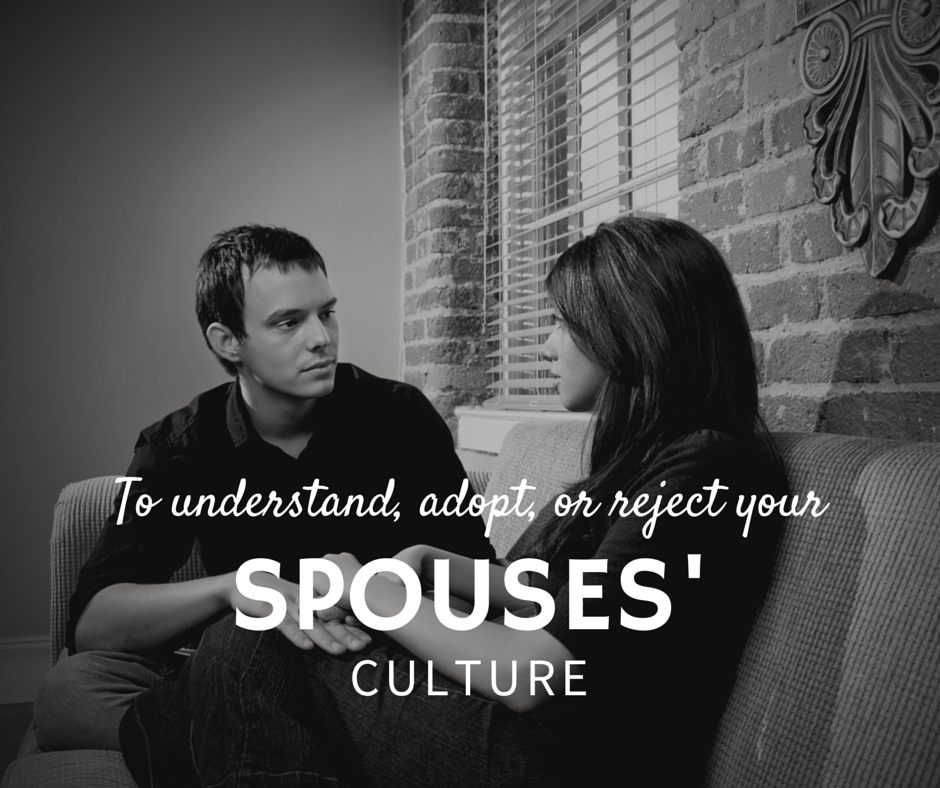 The answer is simple and complicated. Of course every situation is different but I truly believe in order to make your marriage, or any marriage for that matter, work you have to do a combination of all three. It’s easier said than done. Culture is what makes up each of us and whether we realize it or not we carry beliefs and act in ways that are direct reflections of the culture we were raised in. Small nuances that you don’t even realize until they smack you square in the face.

You have cultural baggage and your spouse will too. You need to step back and look at every situation from several angles before reacting. One example, in Morocco there’s a belief that pouring hot water down the sink is bad -it disturbs the jinn. This is a cultural nuance mixed with a religious belief. I honestly thought this was a joke for the longest time but I soon saw it wasn’t. This is a minor issue, I felt bad I ridiculed my husband for this but see it’s simply a cultural belief.

In your marriage there will be cultural hurdles. If you’ve always been independent you’ll likely face immediate obstacles. For many Moroccan men it’s not normal for wives to be out of the home, alone or with friends, after dark. They might have a strong cultural aversion to their wife wearing a swimsuit or having male friends. There are other issues that will not be as easy to work through. If you have children there are going to be plenty of cultural issues that come up. Will they be allowed to date? Go to proms? Participate in certain sports? When will they (or will they) be circumcised? You might think these are issues you can work out later but in reality they are not. Religion and culture will play a huge role in how these issues are sorted out.

I have also seen many partners, mostly women, who completely give up their own culture and take on that of their spouse/husband. I always wonder why. I have had many people tell me, “oh you’re Moroccan now!” and while I appreciate the sentiment I always answer, “thank you so much, but no I’m still very much American.” It took a long time but I am proud of my national identity, and yes American is an identity and culture of its own. I know many people who say they are ashamed or find their spouses culture more appealing but the longer we have been married the more comfortable and proud I have become of my identity. I also want to instill in my children pride in BOTH of their cultures. There’s nothing wrong with being Moroccan, but it’s not who I am. Be proud of your heritage and don’t let it get lost!

If you believe love will be what keeps your marriage together in the face of these issues you are wrong. Love goes a long way but it is one piece in making a marriage work. These are the types of issues that drive huge wedges into a relationship. So how can you get through them? Some of my suggestions;

This topic is controversial and one that you’ll likely face no matter who your partner is, however from my own experience and talking with many couples that are both intercultural and of the same culture they seem to be a bigger issue when the partners come from different cultures. 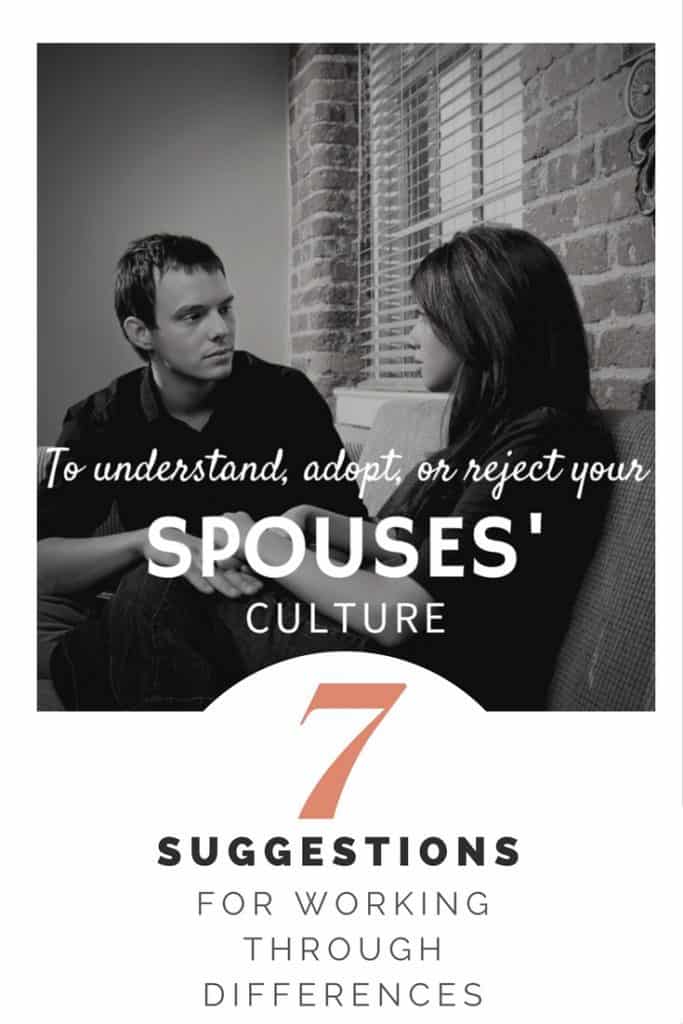 My Money or Our Money: Navigating Financial Issues in a Cross Cultural Marriage 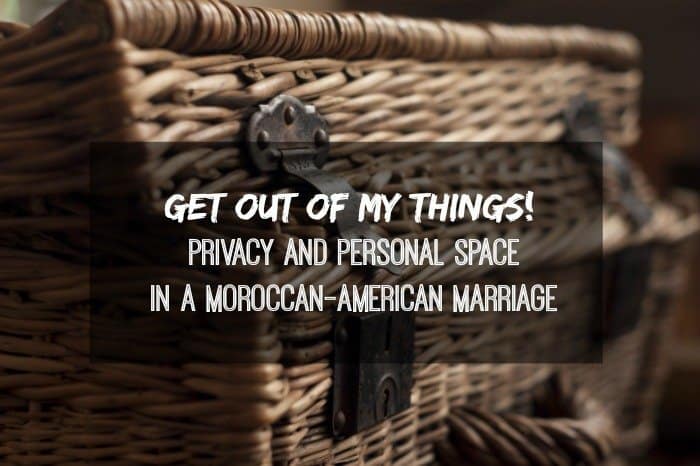 Get Out of my Things! Privacy and Personal Space in a Moroccan-American Marriage

Thank you for this very informative video...though my personal case is not so exotic as the abovementioned cases described here.... but I do often suffer from Culture Clash even having lived for so long in my spouses's country ( which in this case happens to be Germany...) I currently reside near Munich and have a grown daughter who was raised here and therefore has "their" mentality...I am native French-Canadian raised near Toronto and am therefore bi-lingual...I also happen to be of Alsatian descent and therefore stem from a "germanic" culture or a mixed- French-Germanic ( but NOT purely German...) cultural environment...and I personally feel much more at home culturally in countries like Switzerland or Luxembourg...also have a few Anglo Friends here mostly ex-pats Irish, American, British who also unfortunately suffer from a similar culture clash...and work for major IT Firms &/or Corporations here in Munich...We tend to congregrate understandly in the culture we most feel comfortable which is definately NOT the predominant German culture nor our current country of residence...I was just wondering whether other ex-Pats wives married to Germans can identify with my cross-culture-clash problems and suffer ( mostly in silence) from the same or similar symptoms of homesickness and /or difficulty in adapting or adjusting to a foreign and often unfriendly as in my case) culture...Thanking you for taking the time to read this missive...and hoping to hear from you soon my Return with Best regards....Laura Daitch-Landgraf.

I found your post after much googling around about culture and partners. My partner is traditional Singaporean Chinese and I'm third culture Singaporean Chinese. While some might say there's no difference, I can assure you there definitely is, especially because I was raised in a staunchly Christian household where we are taught values such as not considering materialism to be important, but for traditional Chinese, saving by acting rich is extremely important. We have had so many clashes and his father has ridiculed my father, my upbringing and told me I wasn't good enough over tiny topics like whether or not we were going to hold a wedding reception in a hotel. We were going to have Chinese things like a tea ceremony, a small lunch for our parents' friends in a hired location but his father took issue with us not doing all that in a hotel, and somehow he decided to tell me I was not good enough for them because I wasn't Chinese enough. And since the country is majority Chinese, most people have taken his father's side and said I was at fault for not giving up the way I was raised as is expected of Chinese girls, apparently. Much nasty has ensued, with people even suggesting I should leave my birth country if I won't do as they do. I don't know how to navigate the minefield this has turned into but I'm glad I read this so I can try and carry on. And thank you for saying you've become prouder of your own identity. I felt so conflicted for a long time because I leaned in harder to my own identity in the face of being attacked, but those words from others are starting to take root and making me wonder if I was unreasonable for not wanting to change and do as most Chinese women do and just throw away my values and identity. And my partner, predictably, wants all this behind us and covered up because he can't bear to see his family, friends and countrymen in such light so he gets upset if I bring it up and will ask why can't I put the wedding behind us. But it wasn't just about the wedding, I feel like my whole being was attacked and I now need to defend myself from all these people I share a country with every day.

Thank you for creating this website! I am American and I have been dating a man from Morocco for the past few months. He has lived here in the US for over 4 years. Reading your posts has been a huge help for me. As our relationship grows more serious, I know we will deal with many of the same or similar issues. You have given me lots to think about. I look forward to reading more of your posts. Thank you!

Thank you for discussing this subject. In my experience, it is an ongoing discussion because you as a couple will keep dealing with new circumstances. For instance, you've figured out how you want your marriage to be and then you have a child, which opens a new box of discussion topic.

For me and my husband, the best solution by far has been our faith. I'm European and he's originally from Tunisia. I converted to islam (not because of him but because I wanted to seperately from him) and we both have roughly the same degree of practising our faith. So when questions come up, we look at what is best according to our faith. This worked well both living in my home country as living in his, which we do now. Though I have to say it's more challenging now living in a muslim country with its traditions, which are not always Islamic. But our families and friends know how we feel about this, and know we are both quite stubborn and won't do something because 'that's the way it's done here' when we don't agree with it. Examples are our wedding, which was completely not typical for the way they are done but more in line with our faith, and our son's recent circumcision, which we didn't throw a big party for.

I think the bottom line is keeping these sorts of discussions within the marriage, between you and your husband, try to sort it out and communicate that to your surroundings. You'll need some backbone but the happiness and health of your marriage is more important than what other people think, in my opinion.