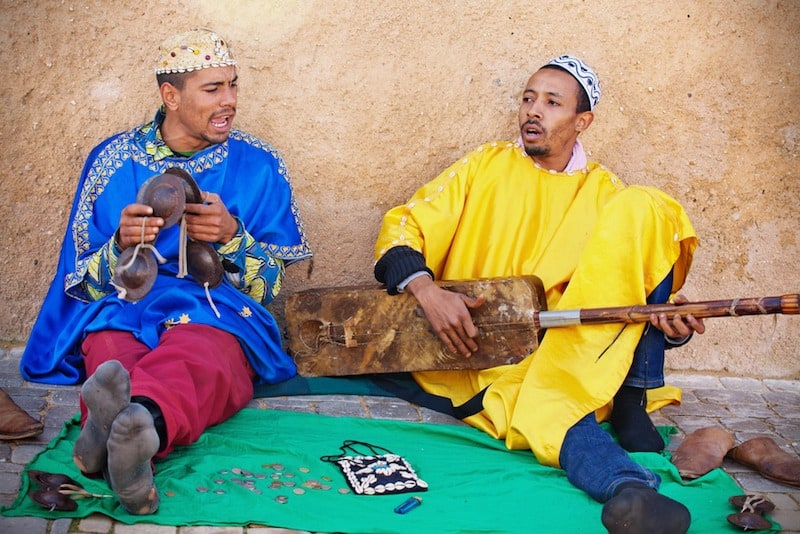 It can be confusing to visitors to know what the standards and rules are around money tipping in Morocco. Every country has its own way of doing things when it comes to gratuities and Morocco is no different.

The currency in Morocco is the dirham. It comes in coins and bills so you’ll want to be prepared for both. The 1 dirham coin is the smallest, most commonly used coin however there is also a 20 centime coin that is 20 cents on a dirham and a 1/2 dirham coin. Coins and bills under 100 dirham are most commonly used for small purchases and getting change is quite difficult, have small notes and coins as often as possible. Paying a 5 dirham bill with a 100 dirham note is not a great idea.

The largest note is a 200 dirham note. There is no denomination higher. This can get frustrating when buying large ticket items! More and more places accept card payments however DO NOT expect to write in a tip on the receipt or have them ask to include it in the charge. This rarely happens. You should have cash on hand.

Fun Fact: As a visitor you’re not likely to hear the mention of rials (currency used BEFORE and during the French protectorate) or francs (used from 1921 – 1974) but if you live here you certainly will. These are old currencies that no longer physically exist though the counting system is still used. If you think it could get confusing, you’d be right.

Confused? It still confuses me – but don’t worry rarely will you encounter this as a visitor! 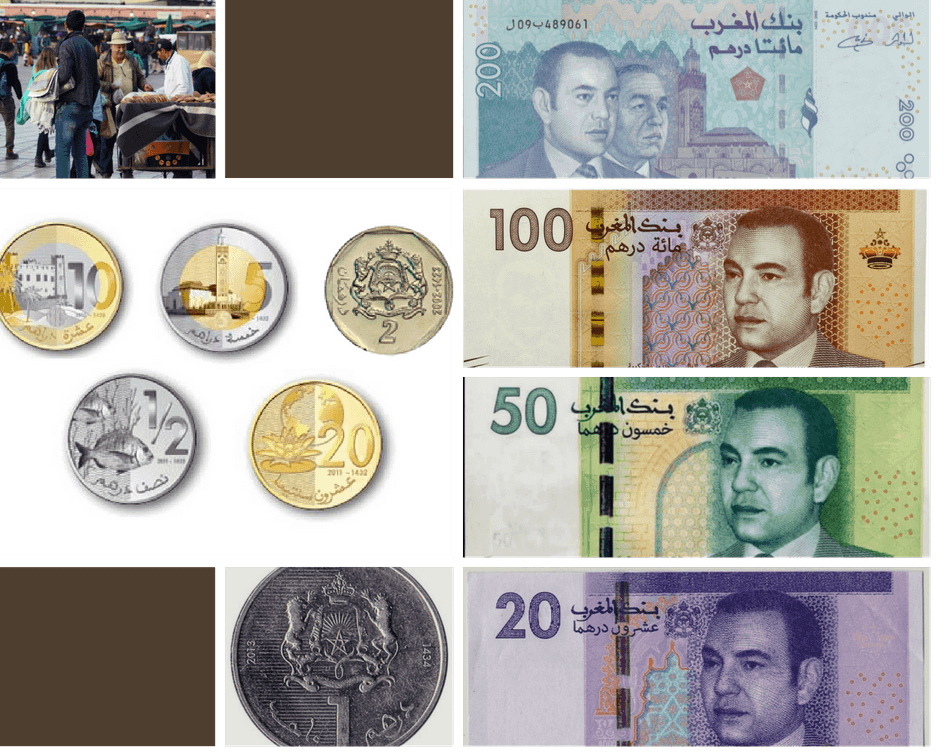 Can I pay with dollars/euros/pounds etc?

Yes and no. In most cases no. You will want to use dirham as that’s the currency of the country. However if you’re making a large purchase (say like a Moroccan rug) then vendors are more likely to accept other currencies. For smaller purchases though, you need to have dirham.

Where can I get dirham? Can I get it in my home country before my trip?

You have three options for getting dirham;

I’ve listed those in the order that is best to get money. You will want to check with your bank at home but often the easiest and most inexpensive way to exchange money is to just withdraw it from an ATM. Make sure to let your financial institution know before you travel you’ll be using your card in Morocco.

Many Moroccan ATM’s don’t charge a fee to withdraw money saving you a bit. Be sure to ask your home bank what their international transaction fees are. The most you can withdraw from Moroccan ATM’s is 2000 dirham at a time. So if you’re planning to make large purchases, the ATM fees made add up.

The second best option is to visit a currency exchange. Check a few however as rates will vary quite a bit. I advise against using the currency exchange in airports as you’ll be charged a premium – most have ATM’s inside the terminal. Ask your riad or hotel if they can suggest the best currency exchange as locals usually have a sense of where you’ll get the best conversion.

The last option is in banks. Not all banks will accept all currencies and you may be stuck waiting for long periods of time if the bank is busy. I’d recommend this only if you’re really in a pinch.

If you plan to bring your national currency to exchange make sure that you bring the newest and cleanest bills possible. There have been times where the exchange has refused to accept bills that we have had because they weren’t the “new” version of the bill or the bills were just broken down. In most cases you aren’t able to exchange coin currency either.

The dirham is a closed currency so in most cases (I’ve heard of a few exceptions) you are not able to get money in your home country; nor can you exchange it back so make sure to do this before you leave Morocco.

Yes, tipping is standard in Morocco.

This speaks for itself but if you’re wondering “do they tip in Morocco?” the answer is yes. Where, when and how much to tip can vary quite a bit and this is where many people get confused or frustrated. Skip down to point 5 where I break down the different situations where you may want/need to tip and how much that should be.

Who should you tip?

Everyone. No not really but it can feel like that. The rule of thumb is to tip anyone that provides you with good service. This means waiters/waitresses, staff in riads or hotels, porters, and guides/drivers. There are many other situations you may find yourself in if you plan to stay in Morocco longer term where a tip would be appreciated.

Again, someone that provides you with a service is the main indicator of tipping.

How much should you tip in Morocco?

I’m American and in our society tipping is done often and in big amounts – up to 20% at times.

This isn’t the case in Morocco.

Tips are left for people that go above and beyond in the service they provide. For small bills round up to the nearest whole number (example a 172 dirham restaurant bill it would be appropriate to leave 200 dirham for good service). For a taxi driver if the meter is 13 dirham, leaving him with 15 dirham is appropriate.

In higher end establishments (hotels/restaurants) a larger tip, about 10% is standard.

In this section I’ll break down different scenarios for tipping. Aside from the restaurant situation you should consider that in some cases no tip is better than an insulting tip. For example if you took a tour that you paid 1000 dirham per person and you offer the guide 20 dirham as a tip, it’s more insulting to do so than to give nothing. Likewise tipping in coins can be seen as a slight. A good rule of thumb is put yourself in the other persons shoes and consider how you would feel.

Tipping in a restaurant

You’ll need to get the waiters attention to get your bill. Once you have it it’s customary to pay the bill directly to the waiter even if you’ll leave the difference as a tip (vs leaving it on the table). If you are paying the exact amount of the bill but plan to leave a smaller tip you can hand it directly or leave it on the table.

Tipping on a tour

There are a variety of tours. If you’re taking a city tour and you have a positive experience tipping 5-10% of the price of the tour is welcome and a good rule of thumb. If you did not have a good experience do not feel obligated to tip.

If you are on a multi day tour with a guide you should offer a tip at the end of the trip. This amount is contingent on how you felt the guide was. You shouldn’t feel obligated to tip if you have a poor experience though giving them a small amount may be one way to indirectly express your displeasure.

It may be that you have a driver either privately hired or as a part of a group tour. You should tip the driver.

For a private car hire consider tipping 100-200 dirham per day depending on the distance driven and how often you use his services. If it’s getting from point A to point B it is one thing however if he’s also driving you to other places during the day it’s another. You need not tip at the end of each day but at the end of your service with the person.

In a group hire situation such as a mini bus or tour bus you can tip a bit less. 20-50 dirham per day is more reasonable. You may want to again weigh how much driving he is doing into your tipping.

Tipping in a Hotel or Riad

Another judgment call here! (I know, I know). The main people to consider tipping are the manager, the cook, and housekeeping staff. Who and how much you tip will depend on what your experience is. Often you’ll have one on one connection with the manager only. If he/she provides great service than by all means offer a tip at the end of your stay. How much to give depends how long you’ve stayed and the service rendered. For a 2 or 3 night stay we typically tip 100-200 dirham.

If you eat extra meals at the riad, for example, such as ordering lunch of dinner it’s nice to give the cook a small tip for the extra effort. 20-50 dirham would be appreciated per meal.

In a hotel situation if someone brings your bags to the room or there is a valet service a tip of 20 dirham is suggested.

This isn’t really a straight forward tip but meant to give visitors a sense of what the average cost of goods (and wages) in Morocco are. I disagree with the notion that you should tip as much as your able. Living in a city with a lot of tourism I have seen the effect that a large influx of cash can have. It throws things off for people that live here who then have to contend with inflated prices paid by tourists (that aren’t equal to wages earned) for their day to day life. Be generous but also be aware.

The price of goods is going to vary depending on the city you are in and whether it’s urban or rural. This is meant only as a general rule of thumb and I’m using average prices (that means sometimes more or sometimes less depending on a variety of factors) paid in Marrakech.

I’m giving you a range of prices here, not because I think visitors are really going to go out to buy these things but so that you have a sense of the cost of living here.

Hopefully this post has helped clear up some questions you have about tipping in Morocco. If there’s something I’ve missed, leave me a comment and I’ll add it in!

Planning (or thinking of planning) a trip to Morocco and not sure where to start? Join our FREE 3 day planning challenge and you'll be on your way to making your trip become reality!