I’d be lying if I didn’t tell you I am a little nervous posting this recipe.  You see, until this weekend I never realized the level of reverence Moroccans have for couscous. It’s the “national dish” of Morocco and in a recent Twitter conversation I was shocked to discover Moroccans take offense to the term “Israeli couscous”.

To me it’s semantics but apparently not so – the crux of the argument was that there is no such thing as any couscous other than the Moroccan version and anyone that says otherwise is trying to steal a part of Moroccan culture.  I think this is a hard concept for an American whose culture is influenced by hundreds of different ethnic and cultural groups that call my country home.

So maybe you can see why I am a little nervous to share a breakfast couscous.  I’ll just disclaim this: This is not a traditional Moroccan couscous, nor something anyone in Morocco would probably make. Heck I didn’t even steam the couscous I used the instant version.  But guess what, it’s good.  It’s really good.  I’ve never liked breakfast preferring to eat a bowl of pasta before grabbing an egg or cereal.  This was perfect for me. 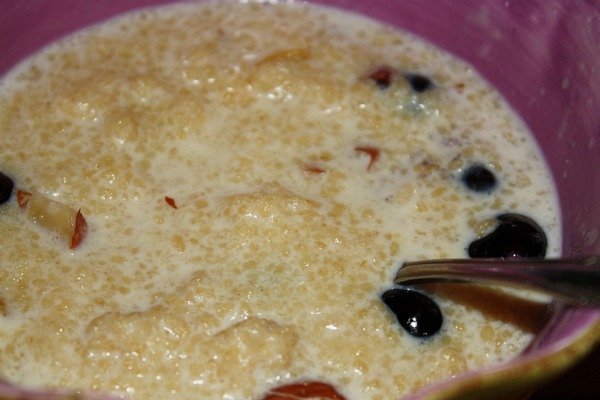 Cook couscous according to package directions.  When cooked, add the cream and milk slowly leaving the burner on low heat.  Make sure to stir while adding the milk to separate the couscous grains.  Once all of the milk is combined, add in the brown sugar, dates, almonds and blueberries.  You can certainly add more or less of any of the items depending on your taste and wants.  This is best eaten hot.

@holly: Or it's possible that nothing is "not right" and Sabra Jews, Christian Arabs and Muslim Arabs, who all live relatively together in the region, and have done so for a significant amount of time, all share many aspects of culture and language despite religious differences, developed it together at the same time and each gave it their own name.

Palestinians have their own couscous called maftoul (The Lebanese eat this as well.) Anyway, it’s bigger than the standard Moroccan couscous & looks very different. My Palestinian husband’s mother who is 85 has been making it by hand her entire adult life.

Moroccans are not the only ones annoyed by the term “Israeli couscous.” In the past year, I saw recipes & photos in Real Simple & Oprah Magazine for “Israeli couscous,” I thought, Hey, that’s not right! That’s Palestinian!

It’s a touchy subject. As we know, food is connected to identity, culture & heritage. Of course, we adopt the foods of others all the time. Perhaps the Palestinians originally adopted their dish from the Moroccans.

Amanda, thanks for sharing this very interesting topic!

Yikes! After reading your intro to the breakfast, I'm kind of scared Moroccans will not appreciate my use of couscous in my dish. lol Jokes aside, I would eat couscous in pretty much any shape/form, breakfast/lunch/dinner! :)

I never would have thought to use couscous in this way before. That is a great idea - albeit not traditional. Whatever, if it's good, it's good! Joining you from our "foodie" group! #31DBBB

To be honest Amanda, although this may not be traditional from a purist perspective, this sounds very good indeed! And remember, Moroccans do use semolina to make porridge like soups, so it's not as big a stretch as you might think. I could see using some leftover steamed couscous to make this, or you might even reconstitute the instant couscous using all milk.

As for Israeli couscous, Moroccans have m'hammsa, which is a very large couscous. I don't serve it with vegetables and stews and the like, but use it in soups or to simply serve it sweetened for the kids with butter, milk and sugar.

Hey Chrstine thanks for your re-assurance. I thought that I remembered eating a sweet porridge with milk but couldn't remember what the grain used in it was (rice maybe?) The flavor reminded me of the milk that couples drink at a wedding. You could use left over couscous no problem - not sure how it would taste if you used smen when cooking couscous however. I'm writing down m'hammsa to remember it - thank you!