The first time I ate this salad was at a restaurant in Essaouira that neither MarocBaba nor I could really afford and the food was really not that great Moroccan food. Suffice to say I didn’t like it. However, there aren’t a lot of green pepper recipes I really do like!

Typically a meal is started with several small plates of Moroccan salads, a mezze of salads for those familiar with Middle Eastern tables.

Taktouka is a very popular and traditional salad that often can be seen accompanying a main dish of chicken. I am sure that there are salads that go with specific meat dishes, I have not spent enough time analyzing the specifics of this although it is something I’d love to do.

These salads always eluded me at first. Mostly because they were served cool, and for several they just didn’t seem like they would be all that good cold. I must admit I still think that for many of them, they would be better served warm but maybe that’s just personal preference.

So if your summer garden has you asking “what can I make with green peppers and tomatoes”? I’ve got the recipe for you!

This tomato and roasted green pepper cooked salad is easy to make and is a good accompaniment to a variety of tajines. This recipe is vegan, vegetarian and gluten free.

Traditionally these are roasted over an open gas flame until the outside is completely black. My mother in law then tosses them into a plastic bag that is sealed until the steam inside loosens the skins and it can easily be pulled away from the flesh. On gas stoves in the US this works great. and this is how I generally roast these peppers. You could also do them under the broiler of an oven on a cookie sheet but make sure to watch carefully and turn them often so that they do not catch on fire. 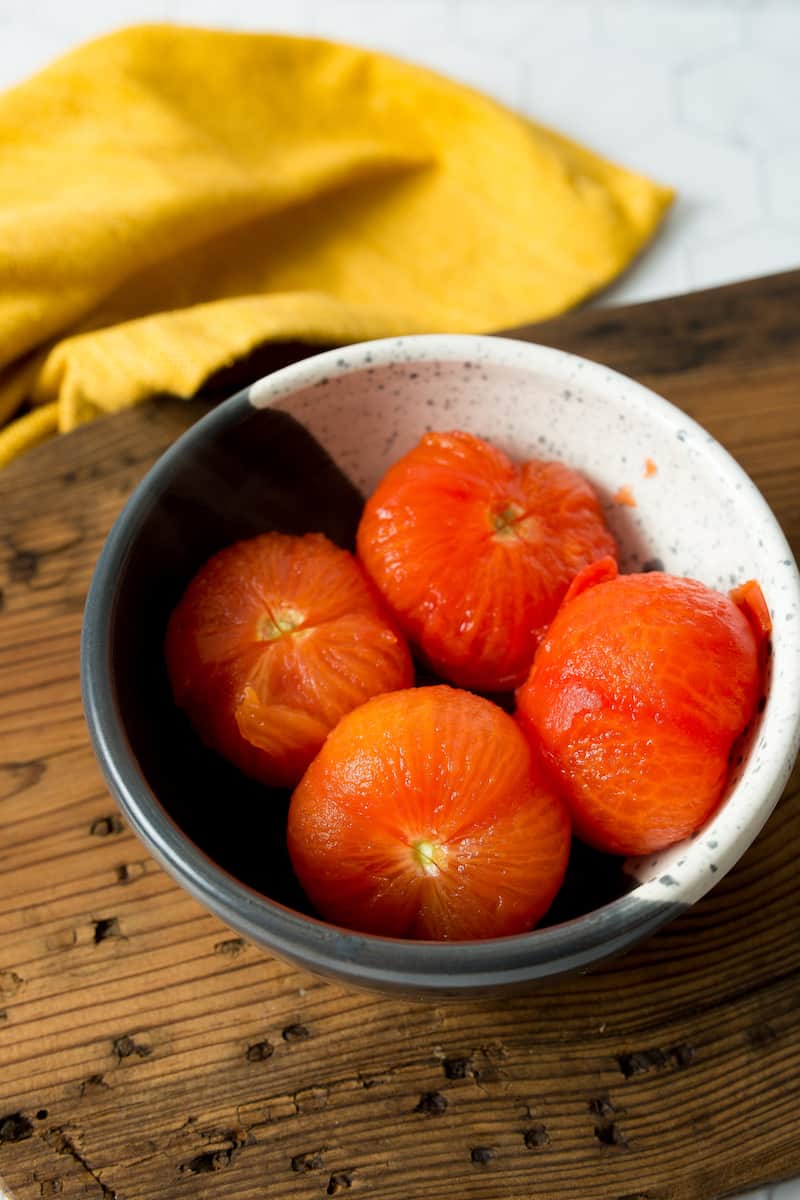 If you are good at peeling these with a paring knife go ahead, unfortunately I am not so good. Instead place a pot of water on high until boiling and score each tomato with an X. Once water is boiling put the tomatoes in and cook for 2-3 minutes. The skins will become loose and peel right off. You do not have to peel the tomatoes if you don't want for this recipe.

Once the skin of the vegetables is removed, chop both the tomatoes and peppers into small pieces. 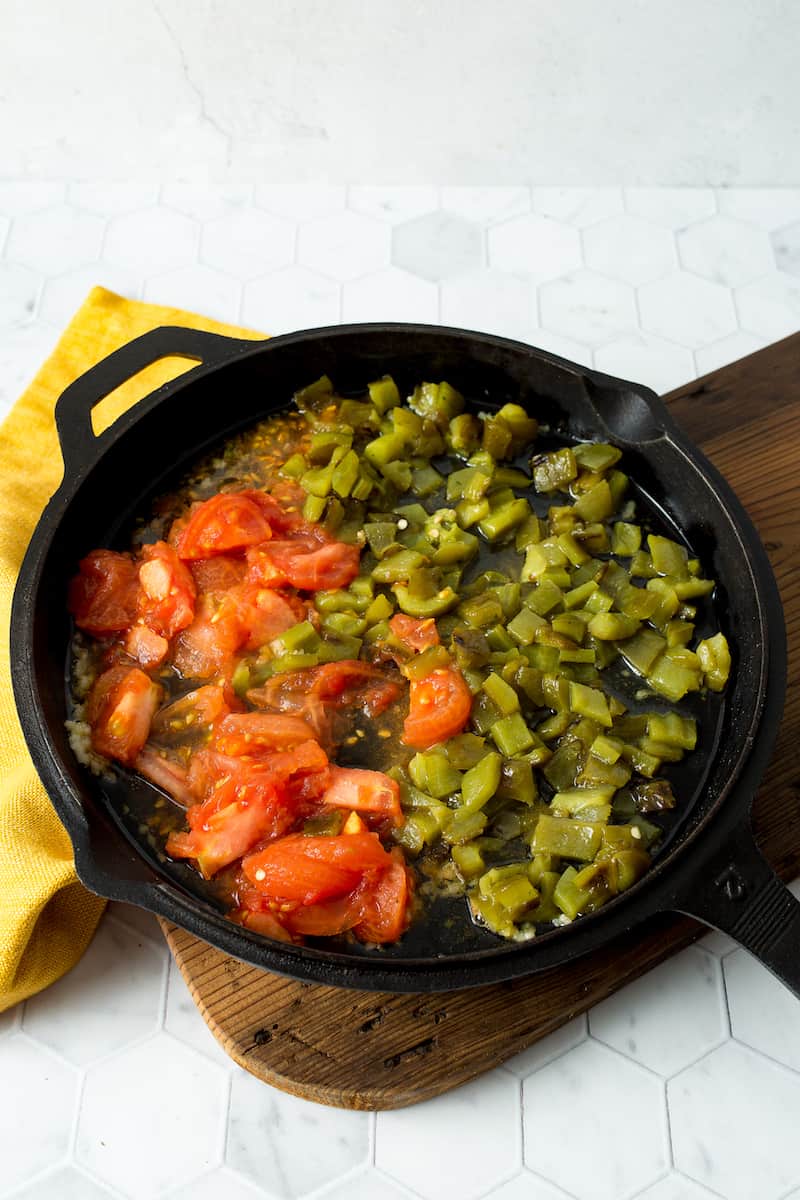 In a large pan pour 2/3 of the olive oil and bring to medium heat.

Saute the garlic for 1-2 minutes and then add the green peppers and tomatoes. 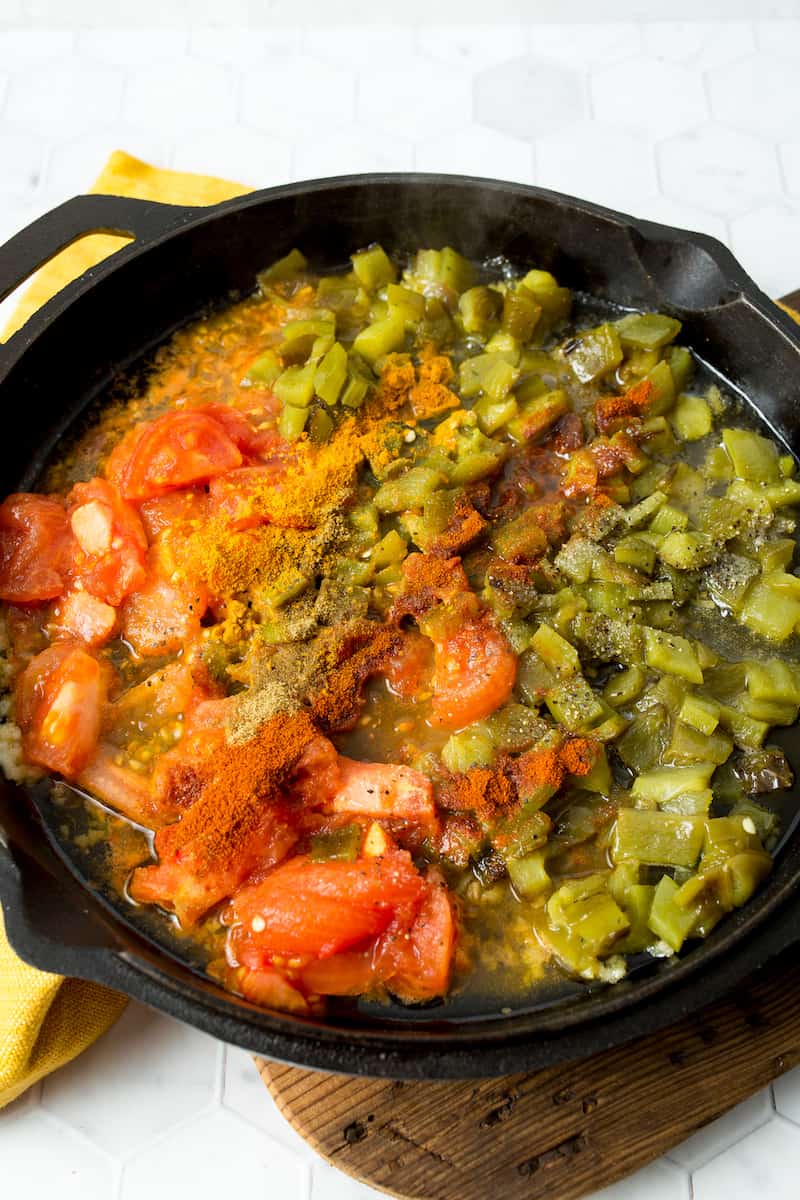 Add the spices to the tomatoes and peppers.

Continue to cook on medium high stirring occasionally until the the tomatoes are very soft and can easily be mashed. This may take less time depending on whether or not the tomatoes were soft from removing the skins.

Mash the tomatoes with a fork or spoon and continue cooking until the liquid is reduced.

If it becomes to dry add the leftover oil.

Once it has reached a consistency you like remove from heat.

[…] to most people they aren’t really a salad at all.  The first time I ate za’alook or taktouka I just assumed it was some sort of cooked vegetable side dish. The longer I stayed the more often I […]

What Does an Eid al-Adha Celebration Look Like? - MarocMama

[…] served this with two salads on the side. Taktouka, a classic Moroccan tomato and pepper salad. Taktouka; Green Pepper and Tomato Salad  and Moroccan Carrot […]

[...] of my favorite Moroccan salads is Taktouka, a very simple but flavorful salad.  The key to making it is charring the outside of bell [...]

A virtual day in Marrakech

Well, we are trying to lose weight so that's one of the things we cut out- even my husband who knows this is one of our biggest weight issues plus cakes and sugar soda. It's not easy, but it does make a difference! :( Once we lose a little, we'll starting eating a little bit of bread again...hopefully that will be soon!