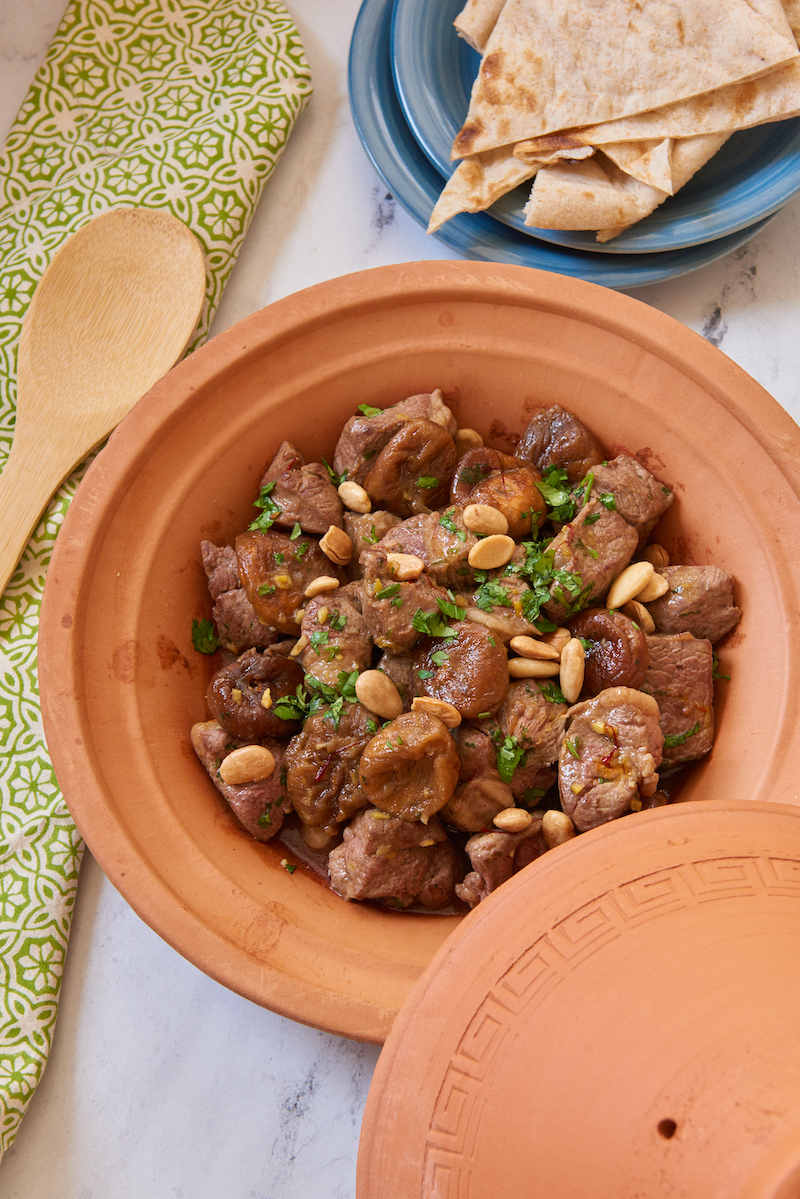 A few months ago we went to have dinner at Ksar Essaoussan in Marrakech. It’s a riad that has been remade into a restaurant, and unlike many riads here, has no rooms for guests – it’s purely somewhere to just enjoy a good meal. Just finding it was an exercise – and we’re quite familiar with the winding streets of the old medina. Thankfully each night a man in a red cape is posted on Bab L’kssour to show guests just how to get to the restaurant.

The ambiance was incredibly nice and the food really well done. We had a variety of salads and tajines presented. But, the shining star was a lamb and fig tajine. The figs were sweet, falling apart and perfectly mixed with the more savory sauce of the tajine. I’ve made a similar tajine with prunes and beef with apricots – but never with figs.

The first job was to find figs. They’re readily sold here dried and are inexpensive. But there are two kinds, a more local variety, and Turkish figs. I wanted the Turkish kind because they’re bigger and I like the flavor better. Once they were secured it was off to the kitchen. One hint on using dry figs, you’ll want to slice each one open and check inside to make sure there are no worms. While this isn’t likely, it’s good to double-check.

This traditional Moroccan lamb tagine looks really complicated and even fancy but with just a pot and a pressure cooker, you can make this!

Almonds and dried figs take this lamb from boring to a variety of textures and flavors that will pop in your mouth.

You may need to cook you meat longer depending on how thick/tough the cuts are.

This really is one of the best lamb tagine recipes!

Absolutely delicious! I used this recipe as a guide line, since I made the lamb (shoulder bone in) , in a caquelon. I browned the meat on the stove top 1st and then with the spices and liquid put it in the oven, covered with aluminum foil, for 3 hours. Thank you so much for this wonderful recipe!

As salami alaikum Amanda, Marsha"ALLAH, THIS DISH LOOKS WONDERFUL! I am going to make it this weekend insha'ALLAH. I will let you know how it turns out! It took me a long time and patience on my husbands part to help me overcome fear of pressure cookers. Have vivid memories of one exploding when I was a small child. Now I couldn't live without it...hehe

I know exactly what you mean about pressure cookers! I think you'll love this recipe - it's a regularly requested meal here now!

sounds and looks so delicious! I need to get a pressure cooker! Thanks for sharing.