During this time last year MarocBaba and I had the idea to start Marrakech Food Tours. We saw tourists every day in Marrakech ducking into restaurants where we knew they were bound to receive a marginal (at best) meal passing itself off as “traditional Moroccan” food. Day after day, person after person and it broke our hearts! After my first visit to Morocco I left disappointed, whatever people were saying about Moroccan food certainly wasn’t what I experienced. In fact one more chicken and olive tajine and my stomach would have burst! I didn’t want the tourists we saw leaving and feeling the same way.

It’s possible to find good Moroccan food being served and that’s what we aim to do with visitors but there are even more dishes that will never be a part of a restaurant menu. You can only have them when you visit someone’s home and they treat you to a typical meal – and a glimpse into the real food of Morocco. 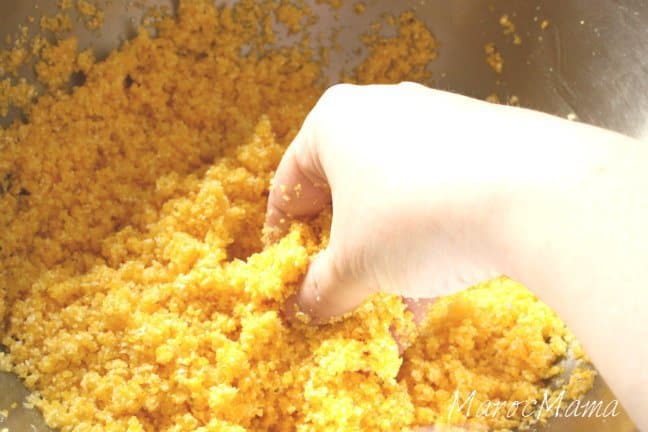 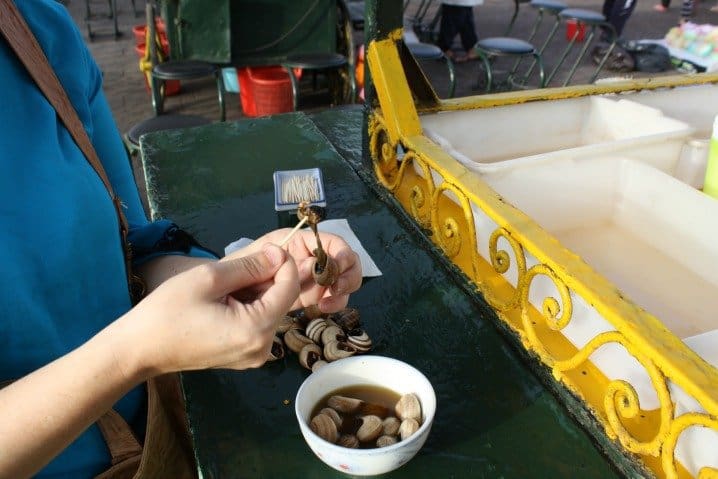 These snails are a much loved street food, found in fall and winter throughout Morocco. While some people really like the snails themselves, most love the broth more. You can buy the spice mixture for the broth from any spice shop. Some families make them at home but, these snails will never be on offer in a restaurant. 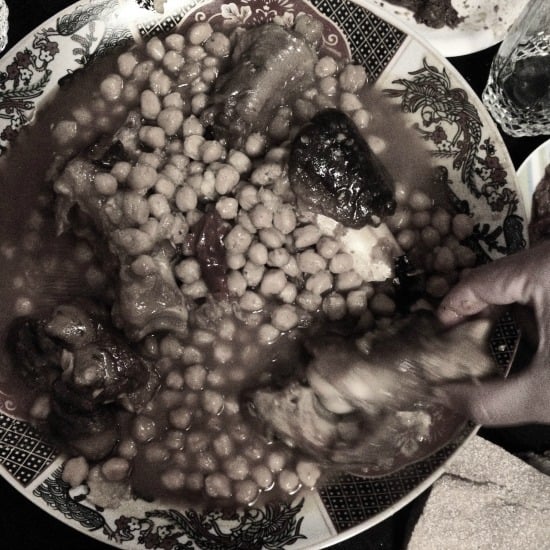 My husband loves this meal, a very deep love. The first time he told me what it was I was aghast. It’s sheep feet with chickpeas or beans. In fact it’s not just the feet, it’s the lower part of the leg that is pressure cooked along with a mixture of spices and chickpeas (or sometimes other beans and/or wheat). 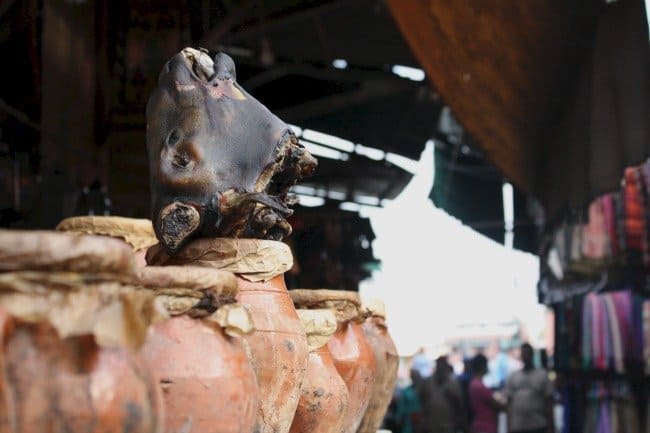 There are a few places that you can find this such as on “Mechoui alley” in Marrakech. Typically it’s reserved for the day after a sheep is slaughtered, such as the 2nd day of Eid Kbir. The head of the sheep is charred over coals to remove the hair and skin. It’s then cut into pieces, the brain removed and cooked separately. The rest (including tongue and eyeballs) are steamed in a pressure cooker.  The meat is then eaten with salt and cumin sprinkled on top. It sounds very strange to people who haven’t tried it but really the meat tastes very similar to bacon. 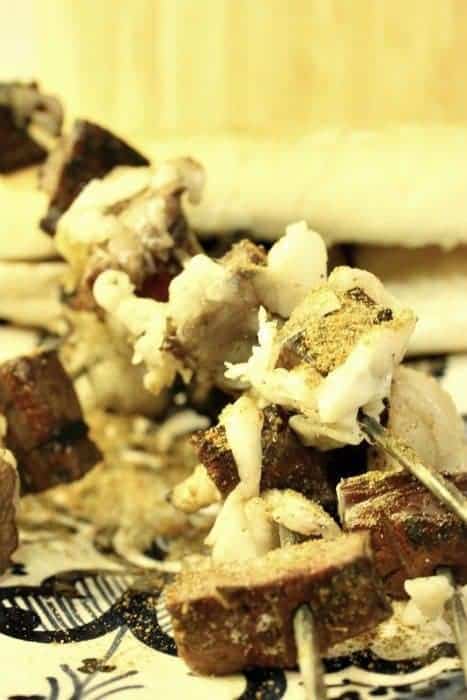 I just got up the nerve to try this, this year (after 10 years of being exposed to it!) What I have learned is this is truly a treat – even though I’m still not a fan! It’s another dish that’s made after a sheep has been slaughtered, typically the same day it happens. The liver is spiced and grilled whole, then cut into pieces, wrapped in caul fat and grilled again. The fat melts to keep the meat moist. You’ll never find it on a restaurant menu! 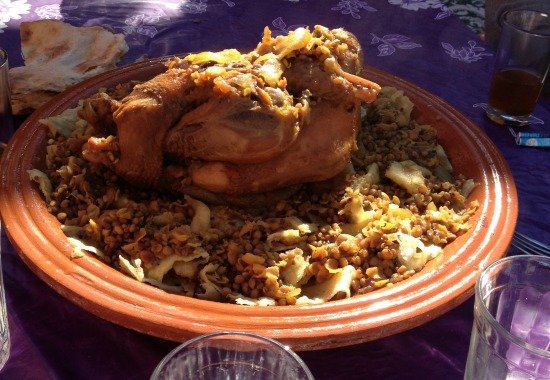 The first time I ate this it completely opened my eyes to Moroccan food. It remains one of my very favorite meals. Trid (similar to msemmen) is shredded and set down as the bottom layer. Then chicken, lentils and onions are cooked with a mixture of spices including fenugreek. The meat, beans and liquid is poured over the top of the hot shredded bread and then eaten. Best. Food. Ever. 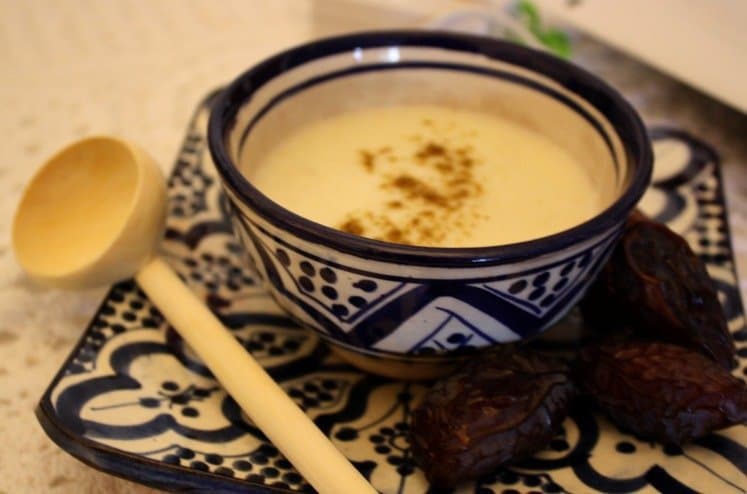 This soup similar to porridge is a common breakfast food. Semolina is whisked into boiling water and then milk is added as it begins to thicken. It’s seasoned with salt, cumin and olive oil. The first time I ate it, I kept trying to add sugar to make it taste something like oatmeal. It’s meant to be savory. 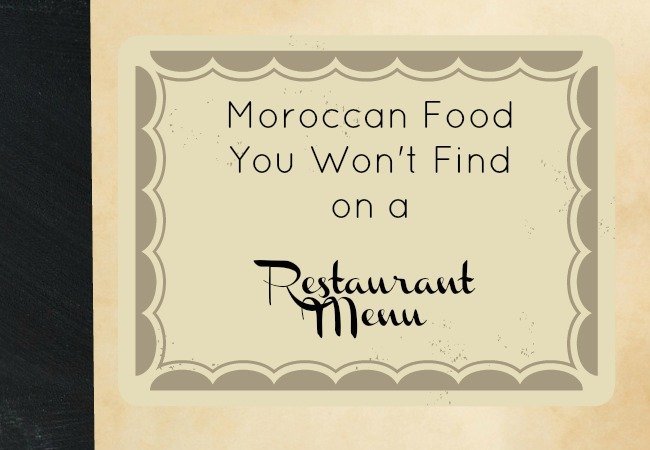 an awesome selection of foods! big up :)

Hi, Amanda , Just a quick note to thank you for the marvellous Marrakech food tour last Thursday evening. On Saturday night we decided to simply wander and eat along the way. We found the sardine 'burger' place again and shared one, so as not to get too full. Delicious! We followed that with a smoothie from a counter that was absolutely packed with young Morroccan people out on a Saturday night. No seats, everyone was just standing nearby. Then we saw the old man from the bakery on his bike and said hello. We had such a great time. Now home, I've got a veg couscous slowly cooking for this evening. I'm sure we'll be back! Best regards to you and Maroc Baba! Mark and Fiona x

Hi Mark and Fiona -- so glad to hear! This comment gave me a big smile!