Dreaming of taking on the Sahara desert with a camel trek? I hope you’ll enjoy this guest post from Frederico who did just this! Coming with kids? Check out my post on the Sahara with kids.

The still, silent desert stretched in every direction. With the beaten up old 4×4 now just a dot far in the distance, that last remnant of the modern world was little more than an insignificant imperfection on the endless canvas of rolling, caramel dunes. This was just the start of my unforgettable camel trek through Morocco’s wild eastern frontier.

A few hours earlier, we’d been saddling up to hit the sand. The starting point was a nondescript spot in the desert, where the 4×4 pulled up beside a handful of camels and their handlers. Even the trip out there was impressive; a winding journey through crumbling desert villages down a long neglected piste – a term used in North Africa to describe the network of unpaved roads that crisscross this unforgiving terrain. Needless to say, it wasn’t the most comfortable ride, but the views more than made up for the literal pain in the backside, and the quiet surroundings left little to remember of all the things to do in Marrakech.

It quickly became obvious that more butt-ache was in store for all of us when we began mounting the camels. At first glance, camels might not be the most appealing animals. As a bit of a minor equestrian growing up, I couldn’t help but view the camel as the horse’s lankier, more socially awkward cousin. My fears were only confirmed when my camel rose beneath me. Unlike the gentle horses I was used to, the camel shuddered to its feet with a sneezing sound, throwing its weight side to side.

One of my travel buddies shrieked when her camel likewise stumbled to its feet unceremoniously. We both got a few laughs from the handlers, who were finishing up the last of their sickly sweet gunpowder tea with a warm smile. After savoring the last mouthfuls, they adjusted their scarves and djellabas- a classic Moroccan garb, and almost an unofficial uniform for anyone who works out in the desert. Imagine a cross between a kaftan and Obi-Wan Kenobi’s robes, and you’ve got a djellaba. 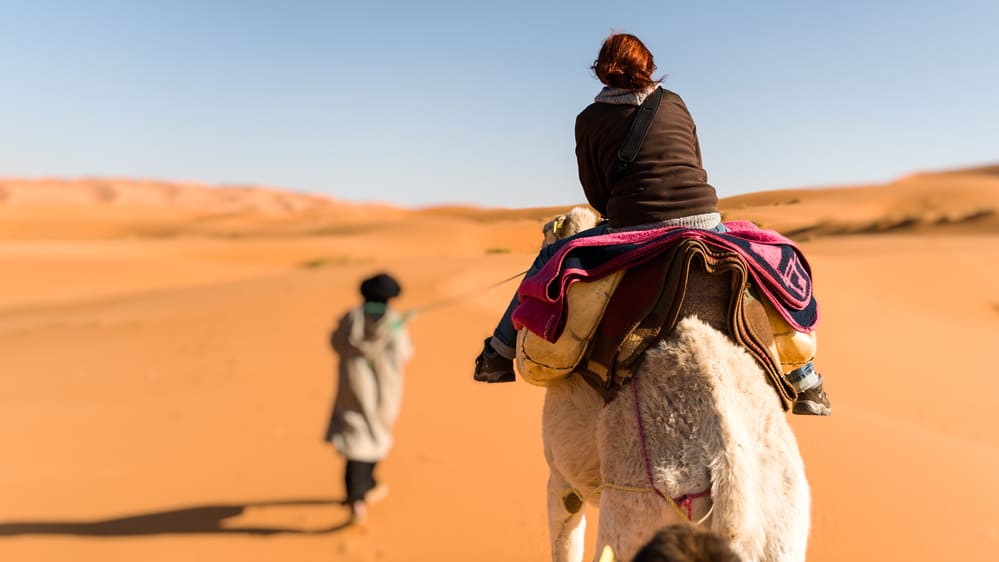 Once we hit the unmarked trail, I understood why these traditional clothes are still the mainstay for desert adventurers. While djellabas offer the perfect balance of breeziness and protection from the sun and heavy wind, a headscarf can be a lifesaver when it comes to keeping sand out of your eyes, ears, nose, mouth, hair and – well, let’s just say sand can get pretty much anywhere!

However, no amount of intrusive sand could have dragged my attention away from the stunning vista laid out in every direction. There’s something about the open desolation that’s mesmerizing. It’s like the Sahara is just too massive for the human mind to comprehend. Staring out across that lifeless, sprawling expanse is almost like looking through a telescope. Like the stars and galaxies, the desert feels like it could just go on and on into infinity, holding on to its secrets from a world beyond our civilization. It’s inhospitable like Mars, enormous like Jupiter, and as mysterious as the darkest recesses of the universe. But damn, it sure is breathtaking.

Within a few hours, I had even started to warm up to my camel companion. Camels might seem a bit rough around the edges, but they’re beautiful animals once you get to know them. Their jarring stride is inconsistent and uncomfortable at first. This is because unlike horses, camels move both legs of the same side at a time. This creates a weird, wobbly swaying that’s pretty awkward for a while. Eventually I got used to it, and started to find the swaying almost relaxing. Indeed, if a horse is an agile sports car, then the camel is a Cadillac – smooth and stylish, and doesn’t care what you think. 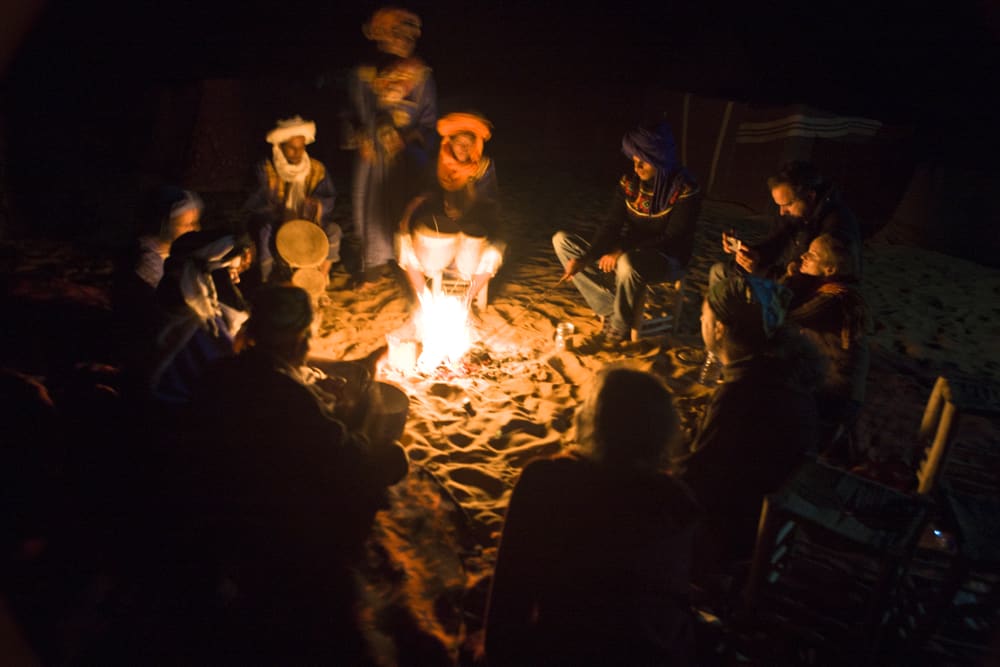 As the day neared its end and the group cramped around the camp fire, two fellow travelers and I decided we go for a walk up a nearby dune. By that point, we were deep in the heart of Erg Chebbi. An erg is a massive sea of sand dunes that constantly moves with the wind. Chebbi is the smaller of Morocco’s two ergs, though it’s by far the most visited. Walking on a sea of sand is no easy feat, though. As I heaved my way up the 30 m dune I gained an even greater respect for the camels. Stumbling up the loose sand with heart pumping and the lungs gasping for air I remembered how the camels had made short work of similar dunes, gliding over the brutal terrain with their long, lanky legs.

When I finally reached the top, I was rewarded with a view that’s still scorched into my mind. I also understood why they call it a dune “sea”. From above, the dunes looked like waves on a fossilized ocean, crashing motionlessly over the expanse of the Sahara. The erg was absolutely massive, with no end in sight. Then came the sunset, which turned the desert from a dull rust to a melange of purple, blue and orange. And then the night came, with only a few dots of light in the distance that belonged to either Bedouins or a small village.

Getting off the dune was easier. I just threw myself down, and rolled through the sand. It got in my hair and through the folds of my clothing, but I didn’t care. Back at camp, I dusted myself off, and sat down for a traditional Moroccan meal of couscous with stewed meat. Ripping into the meat by the light of the fire, I couldn’t help but feel a bit like an bona fide desert nomad. This feeling only grew when the last round of tea for the day came around. One of the handlers whipped out a sintir, a classic Amazigh stringed instrument that looks like a boxy guitar. While the guides were strumming out some tunes, I ended up lying on my back, tea in hand, gazing up at the clear night sky while listening the exotic chants of our fellow guide. 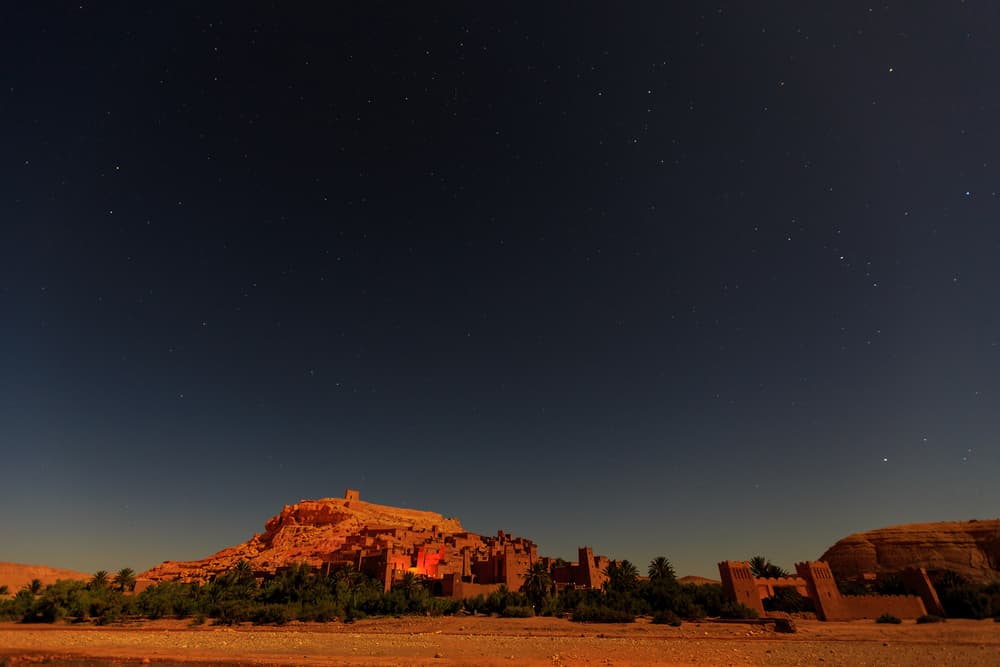 That deep in the desert, there was zero light pollution, and I was even able to catch a shooting star before I dozed off. As I was falling asleep, I once again found myself mulling over the parallels between looking into space, and witnessing the unconquerable desert. I was just another interloper passing through a part of the world has resisted the grasp of even the world’s most powerful empires. Invaders from the Romans to French never truly conquered the deep Sahara; even today, the region remains one of Earth’s few bastions of true, untamed wilderness. This is because nobody can beat the desert – like a hammam in the Marrakech medina, you can only experience it.

It felt like a short night, and we made our way back to the village, each of us fully acquainted with our ride. The sun came up early, and as the golden colors of the desert created yet another beautiful canvas I managed to take some great pictures and video. Our handlers were as cheerful as all the Moroccans I had met during the trip, and the group seemed to have grown into them. One of them absently saw me filming and gazing at my surroundings, and slowly made his way to me. “OK?” he asked with a big smile. “Tayeb”, I smiled back.

Ready for your Moroccan adventure?

Biography: Federico is an adventure and family travel blogger at www.maitravelsite.com. He’s visited more than 80 countries around the world, and despite having visited Egypt, Tunisia and Morocco he can’t wait to get back to the Magreb. This time though, he’ll take his family.