Making friends has never been easy for me. As a young child the friends I had in preschool were largely the same people that complete high school with me. That’s how it is when you live in a small town. When I left the comforts of my hometown, I started to struggle. I was very self conscious and while outspoken in general, when it came to making any serious friendships I struggled. I can say now I really felt that no one would want to seriously be friends with “the fat girl“. I always sat or stood in a way that attempted to physically minimize the space I was taking up. It’s only after losing 100 pounds and catching myself subconsciously engaging in the same behavior that I could even  acknowledge what I had been doing for years – and things began to make sense. 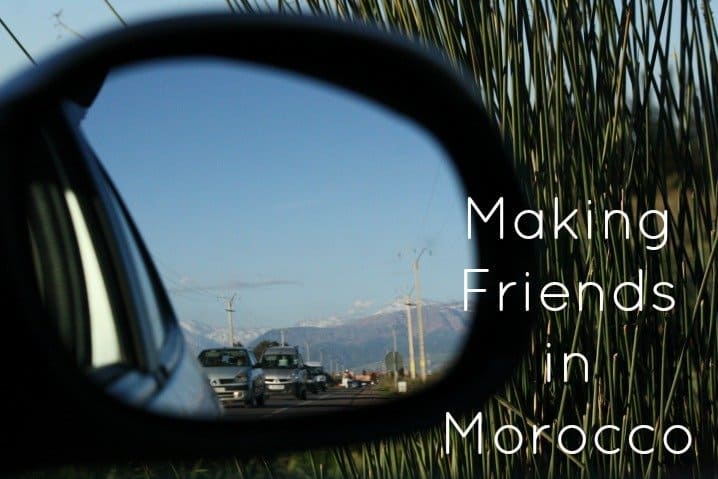 As an adult with children, I wanted to have friends. I made a few very dear friends but I can remember saying to my husband when we moved to the Midwest from Washington DC, “I really wish I had someone I could call, just to talk.” Then one day he came to get me from work and said, “guess what?? I met a friend for you!” And he proceeded to tell me all about the mom on our sons playground. She and I did become friends. Then we moved again.Moving to a new country is completely overwhelming in tens of ways. I have been so so fortunate that I’ve met several other expats in Marrakech. I have a have a weekly standing lunch date I with some. Another is my mani/pedi buddy, while another lives further away but is my go to girl when I need to pick up the phone and just talk. She gets me, I get her. I can’t put into words how important this has been. Really, when I think what my life would be like without having them there, I seriously doubt how happy I would be here. Recently, my kids were invited to the birthday party of our neighbor. She’s a young mom, probably close to me in age. When I was  coming home one evening she was outside and our kids were playing together.  I went through the customary greeting and then it hit me.  We would never be friends.

Because our ability to have a conversation ended as soon as my darija dried up. A million emotions came over me as it became so obvious that I lacked any Moroccan friends who didn’t speak English. All of my feelings of self consciousness bubbled up.

How could I ever imagine them wanting to be my friends?

Won’t they just laugh at my child level Arabic?

No, they couldn’t possibly just want to be my friend.

As much as it hurt it also gave me more resolve to become functionally fluent. I want Moroccan friends, so I am going to work even harder to speak well.

Have you ever been in a similar situation? Any tips for moving past it?

I've stumbled across this touching article in search for some friends. I'm a 20 year old girl who recently just moved from Agadir. I left all my friends there. And as I am in a gap year due to my autoimmune disease, I don't have any friends and I don't know how to make some too. I feel really lonely, and when these emotions impact my mood and productivity, I just go out and walk for half an hour. As I am still young and always by myself I felt this need to socialize but in vain. There have been some guys who approached me and asked for my phone number but I just walk past them and ignore them. I don't want to date, I only want to have a friend or two whom I can hangout with. After all, this loneliness will not last forever hopefully. Concerning your problems with Darija, I feel you and your struggle to learn it because, it's not even a language, it's a dialect, so it is not easy to learn. I do not know what it's like to live as an expatriate but from what I've read, I'm pretty sure it requires a lot of strength and patience to cop with. I'm impressed by your will to overcome all sort of obstacles in your way. You have a spirit of a fighter. Also, If you know any friends in Marrakech who can speak English, I would love to meet them and maybe have the chance to both socialize and learn English at the same time.

Heey Amanda! I discovered your blog recently. I am Moroccan, I live in the center of Morocco. (My city called Tiznit) I am so glad to read your blog especially this. I just noticed that you wrote this a while ago, so I hope you are able to speak Darija very well and make Moroccan friends. Also, Marrakech is my favorite city, it's like a paradise for me. There you meet different people, it's just AMAZING! Have a great day ! 💓🌟🌸

I can't speak as an expat myself, but I have several Arab friends who moved to Dallas recently and used the gym as a way to meet friends. This is how we met and they are now my favorite people to hang out with. If you go to the same gym regularly around the same time you end up running into the same people over and over, and it's inevitable you get to know them. It can be as easy as asking another girl how to use a machine or complimenting her sneakers. I'm not sure what the gym situation is like in Morocco, but it could be a really great option to meet new friends and get some much-needed endorphins.

I am sorry to read about difficulties that You face due to not knowing local language, I did face the same issue when i was in Oman, it took some 6-8 months to start understanding the Arabic and later i learnt how to speak and did make many friends in Oman. If being a man i had to face problems, i can't imagine what a women would go through, i was in Oman from 1988 to 2000, back in Mumbai India, and doing well enough to take care of my Home. there was a time when i did have Egyptians, Syrians as friends, still i agree its very difficult to overcome barriers since its also TRUST based when we try to make friends abroad. But nothing is impossible in this world. be among good people whao will guide to through well. My best wishes

Moving towns and more so moving countries is a big challenge for anyone or friendship. It sounds as though you have been adapting to the expat lifestyle. It is amazing that in this situation you befriend people of similar backgrounds/roots even though at home you may not make that connection. At home you have less in common, yet as an expat you have a common cultural history and roots, that is what brings you together. I relate to my time as an expat for 17 months living in the Middle East.

Sorry to hear that your neighbour is not a future friend. I would like to think of it as she is a potential friend but only of a very basic, limited interaction kind. Language is a barrier yet communication through gesture, expression and consideration will establish a basic form of relationship. As your Arabic improves there may be more opportunities to build on this connection.

You're right I hope I can. I am certainly willing to try but need to find a partner/friend who is willing to try! That's proving more difficult I think.

I've actually found that lack of language skills is a great way to make friends and potentially have deeper connections with people than you do when words get in the way. I tend to think we see one another's humanness more when communication is stripped back to basics. I've been learning Darija for 3 years now - when my Moroccan partner and I first met, we didn't have a shared language at all! Since then, I've also befriended a Moroccan woman near to where I live in England and one of the reasons we became friends was precisely because of the desire to learn the language (it works both ways for us, but because my Darija is better than her English, I find we tend to speak more Arabic, ergo my Arabic improves at a better rate than her English). So, really just to say that it's good to make friends precisely BECAUSE of the language barrier - the best way to get to grips with a language is to work through the fear of sounding stupid and actually talk to the people you think you'd like to get to know better. Conventional language learning techniques state we need textbooks, dictionaries, etc, to learn from before we can communicate; most Berbers you meet in Morocco are proof that this is ridiculous, and new languages are naturally acquired through befriending people and striking up conversations, however limited these conversations may be to begin with. I've found a lot of humour occurs due to stumbling over the language, but as long as we can take ourselves less seriously and learn to laugh at our mistakes, this is what makes it fun (and anything fun and social gets committed to memory much more easily than reading phrasebooks and trying to figure out grammatical structures). And fun makes friends! The friends bit CAN come before speaking well, not the other way round :-) As long as we have an outlet for our deeper thoughts and feelings (as you have with this blog and possibly the other expat friends you mention), the deep and meaningful conversations will naturally occur with your non-English speaking Moroccan friends as your language skills develop - and because you'll already have gained their friendship, the trust inherent in sharing more of ourselves has already been established.

Thanks for sharing! I don't completely disagree though, do in a way. I know language isn't the only barrier and have been told many times it's just hard to make friends here when you're an outsider. People are warm, welcoming, inviting, hospitable - to a degree. Yes, it's possible to have basic conversations, and I do. But in writing this I meant more the type of friend you call up and chat with when you have a disagreement with your spouse, or you're missing home. I don't have the language skills to have anything more than a basic conversation - certainly nothing in depth! I had many good Moroccan friends in the US, but that was because they spoke English. Part of the challenge too is finding people willing to befriend you in spite of the language trouble - and THAT is the part that is difficult. I can be as willing to try but without someone who too is willing to try - won't happen. :/