Everyday I get many emails from readers. Sometimes they just want to contact me privately, and not leave a public comment. Sometimes they want extra tips on a recipe I’ve shared. But one of the top questions I get, almost on a daily basis is, “is it safe to travel to Morocco?”

There are so many layers and levels to this question. When I posed it I immediately thought of general safety and the threat of a terror attack. It’s on everyone’s mind and so let’s just get the elephant out of the room.

In many assessments released by governments around the world Morocco is regularly labeled “more safe” than European countries such as Spain or France. I live in Marrakech, probably the most touristy city in the country. I regularly fly in and out of the country. I keep abreast of Moroccan and foreign news outlets as well as talking with regular people about the situation in the country. I am not saying you shouldn’t keep aware of what is happening but don’t let a perceived fear keep you from experiencing something truly wonderful. 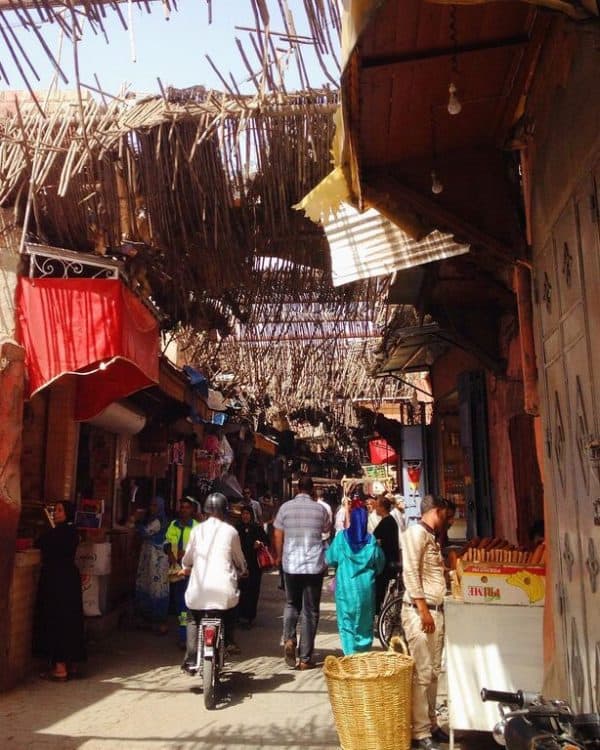 But here’s my general assessment. There is no where in this world that is “safe”.  Bad things can happen everywhere. I have not, and will not change any of my travel plans out of fear. Just because something happens in Tunisia or France don’t draw the conclusion neighboring countries are unsafe – or even that those countries themselves are inherently unsafe.  I was just in Turkey and it was completely safe even though a massive civil war is raging in neighboring Syria and Iraq, another neighbor has been in flames for years. As my oldest son says “bad things can happen anytime. When it’s my time, it’s my time. I don’t want the bad guys to stop us from living our life, because then they win.” (Pretty wise for an 11 year-old if you ask me!)

Is it safe for solo women?

Yes it is safe, but you might face some issues. I really hate to admit this but it’s a sad reality. Large cities will be the toughest for a woman alone, but also offer the most security so it’s a balance. So this list is going to be practical info for solo women. You might not like what I say, you might think it’s sexist or “wrong” – that’s fine. I live here, I don’t like that this is how things are right now but it is.

Are the airports secure?

Many people feel Moroccan airports are unsecure. I fly in and out of Moroccan airports 4-6 times a month. Security is different. At times it might feel lax but don’t be put off because it’s not the same as security in the US or Europe. The Moroccan government has more information about you when you enter Morocco than you might be aware of. They know who is coming in and going out of Morocco. They do not mess around when there is a security concern. If there is one thing Morocco takes very seriously it is security. Truthfully as a foreigner you’re much more cared for and a greater concern for the country. So while the procedure is different, don’t think different = bad. 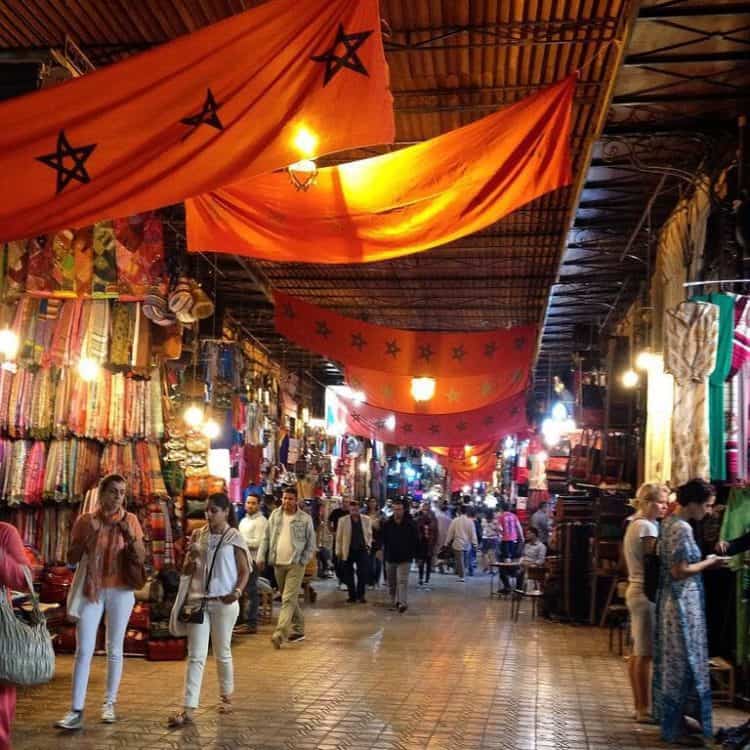 How do you handle an aggressive situation?

If you face a hostile situation, act as you would at home. Seriously. If you get cornered into a visit to the tannery and money is demanded (just an fyi don’t get cornered into this – just say no and keep walking) give something to get out of the situation and leave. Then threaten to call the police. Be firm, loud, and aggressive back. If you’re in a street when something like this happens, knock on the closest door. I’m confident whoever lives in the house will help or the person making demands will run off. I think having a working cell phone is a must and threaten to call the police – or call them if you need to. They don’t take kindly to foreigners being harassed.

In the event of a major emergency is there an exit strategy?

It is worth inquiring with your national government about the policy and procedures in place to evacuate their citizens from a country if something were to happen. Every country will be different. That being said don’t leave it up to your government to figure this out. You should have an idea in place. When we travel we keep the number and address of our embassy in that country at hand. I do a quick look to see how to get there But, unless there is a major catastrophe this is irrelevant. Should something happen whether it’s a terrorist attack or natural disaster, you’ll be using split second thinking and I’m willing to bet the others around you will be in the same situation and all will be helping each other. 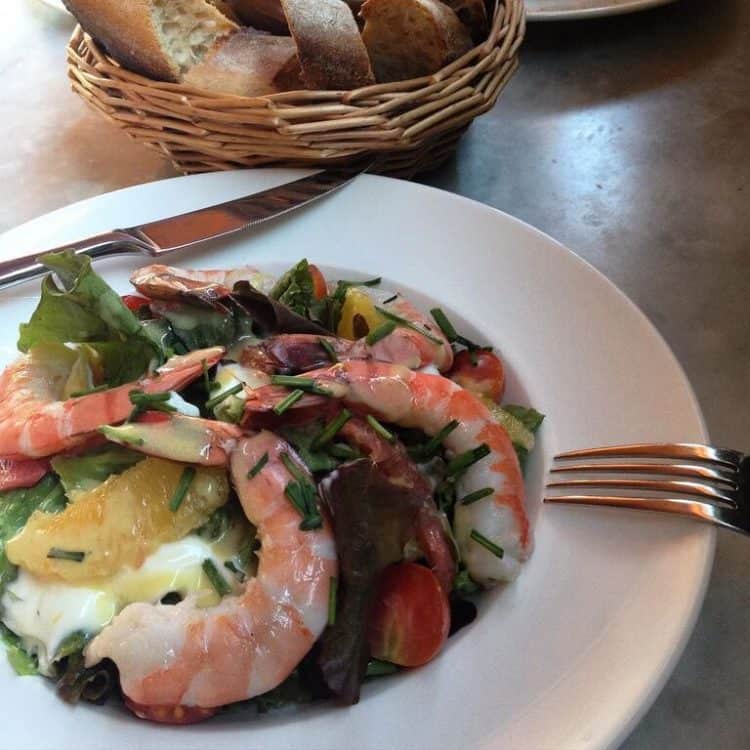 Is the food safe?

The smaller practicalities of life like food and sanitation can also be important. Questions about food safety are always big on the list of questions I get. Overall, yes the food is safe. While many people say avoid fresh fruits and vegetables I think this is bogus. Fresh produce and foods are the best for you. Make good judgments about the cooking spaces. The more locals you see, the better. They aren’t going to eat somewhere that makes people ill. I would avoid fried foods only because oil can be used many, many, many times and never changed. One other food you may want to avoid – eggs. In riads this should not be a problem but we’ve gotten sick a few times eating eggs in street food stalls and restaurants.

Have more questions? I’ll try to answer in the comments! 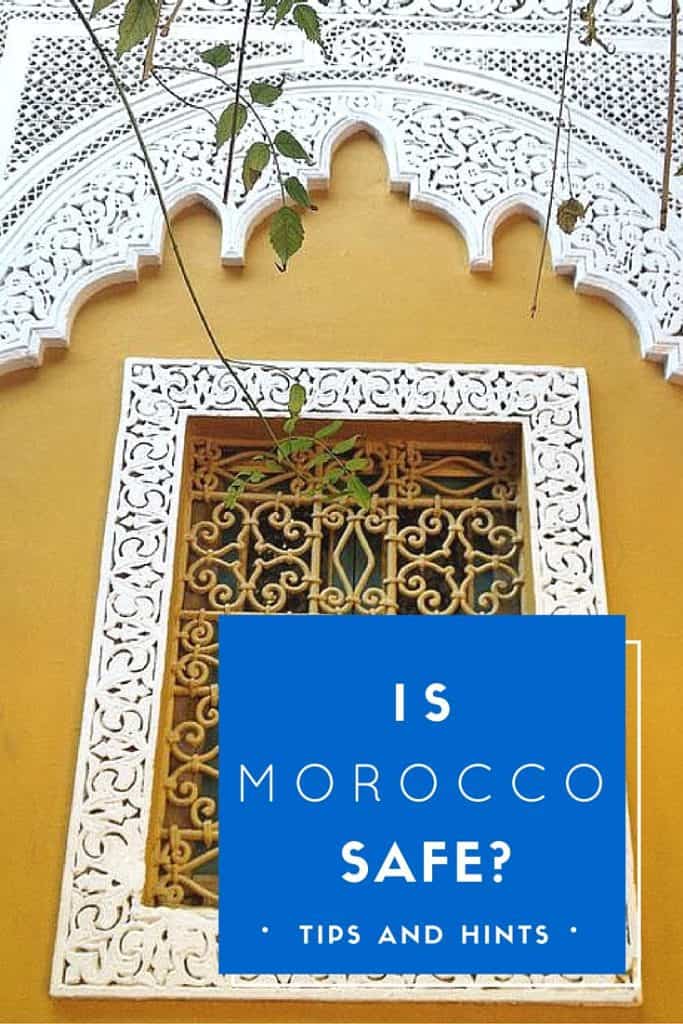 Hi Amanda, I ran into your blog as I'm looking for information on Morocco. My wife and I will be traveling to Spain for first time in September and we have always wanted to experience Morocco, so we set about 4 days travel from Tarifa to Tangier. In reading further Tangier is more modern than what I thought and we wanted to experience a little more Moroccan culture. I wanted to make a trip to Chefchaouen so Marrakesh would be too far. I thought of making Fes my home base and then branching out from there but I'm not sure if I should do that in Tangier instead. I know its not enough time to see the beautiful country, but at least it will give us a small taste. I would really appreciate any recommendations you have and what other areas we should not miss. Thank you kindly.

Hi - Are you set on taking the ferry? You can also fly from Spain to Morocco (Marrakech/Casablanca/Fez) inexpensively (from Madrid, Seville, Malaga, Valencia, Barcelona etc). If you want to stay in the north you could stay in Fez but remember Chefchaouan is a 3 hr drive each way from Tangier or Chefchaouan. You might also consider Tetouan as it's a different feel, not too large but still very "real" and more manageable than Fez. I guess it really depends what you like and are after but those would be my suggestions.

[…] Along with the question of eating in Morocco with food allergies, another very common question I get is about women visiting Morocco both alone and with friends. It can seem really intimidating to visit a Muslim country for those who have never been here. I have several posts that share some ideas about what to pack and wear as well as answer the big question; is Morocco safe? […]

Salaam Alaikum Amanda, Alhamdullilah I hope your well and Ramadan is not too trying for you...

I have just come across your website and found it very helpful and informative. I am hoping to travel to Marrakech for the first time in Aug 16 with my wife and 2 teenage daughters. I have been researching items (as you do when travelling) and have a couple of questions, if you can help, please.

We staying in a Riad near medina as I expecting to eat out with the family in the square most nights but since reading your blogs I don't think that's a good idea. We can always try and find a place I suppose where Moroccan families are eating but that's not always going to be the case.

Can we eat around other places in Marrakech ? for dinner that are reasonable with at least a decent level of quality if not an exceptional one and what do you advise regarding lunches and snacks ? Also do you advise us to eat in the riads as well ?I would assume that would be close to authentic Moroccan cuisine.

I don't think I have any other issues and to be honest your blog answered most of them.

I look forward to a reply if you can, Alhamdullilah enjoy the rest of your Ramadan,

my salam to your family

Hi Nadeem -- check out this post for eating in Marrakech - if you sign up for the pop up that appears on this page you'll also get my one page list of recommendations on where to eat - https://marocmama.com/what-to-eat-and-what-to-avoid-in-marrakech/