I have been feeling very clearheaded lately and what I want to write about today is the sea. It contains so many colors. Silver at dawn, green at noon, dark blue in the evening. Sometimes it looks almost red. Or it will turn the color of old coins. Right now the shadows of clouds are dragging across it, and patches of sunlight are touching down everywhere. White strings of gulls drag over it like beads.

It is my favorite thing, I think, that I have ever seen. Sometimes I catch myself staring at it and forget my duties. It seems big enough to contain everything anyone could ever feel. – All the Light we Cannot See

Morocco is like a restless child asleep in bed. Its head the tussled green plains of the north, the body like the mountain peaks that punctuate through the central inlands with the Sahara pulling from all sides like a blanket tucking him in to sleep. The parents then are the ocean and sea that hug coasts tightly, whispering good night. Just like human parents, it’s from the seas that Moroccans have for generations been fed, protected, and sheltered.

The northwestern coast of Africa was the farthest point on the continent for great civilizations to reach. The Phoenicians, Romans, and Arabs all came and established outposts. Morocco was a sanctuary for Muslims and Jews expelled from Europe during the Inquisition, they knew safety would be found by crossing the Mediterranean Sea. The infamous Barbary pirates roved the Atlantic coast protecting the kingdom from invaders and expanding the reach of the country. The rugged coasts of the south kept out ships who might want to come onshore to plunder other parts of Africa – at least for a time. 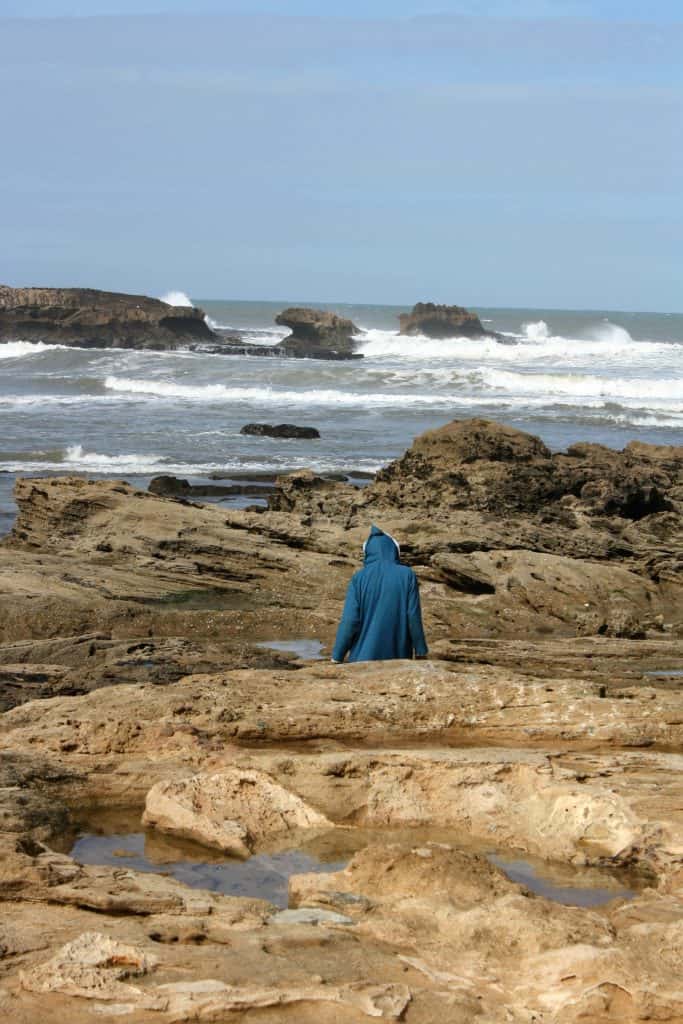 But perhaps the most important courtesy was the bounty found within the water. Visit any Moroccan coastal city and you’ll find either the churning grey waters of the Atlantic riddled with rocks or the cerulean Mediterranean rocking tirelessly against the outcrops. Locals know where it’s best to enter the waters with their iconic wooden blue boats and find fishing grounds. It’s the Canary Current off the western coast where fishermen find the best supply. Today just over 100,000 small scale fishermen operate in the country but it’s estimated 400,000 people benefit indirectly. But these small fishermen are under threat as global fish supplies dwindle and deals are made to permit larger international fishing boats to operate in the coastal waters of Morocco.

No Moroccan city holds more stories, or ties to fishing than Essaouira. Tourists visit to see the cobalt blue boats bobbing in the harbor and men the whose whose wind-worn faces tell the stories of generations who have called the city home. Fishing has been the bread and butter of Essaouira for generations and today, men work in the way of their fathers and grandfathers before them. 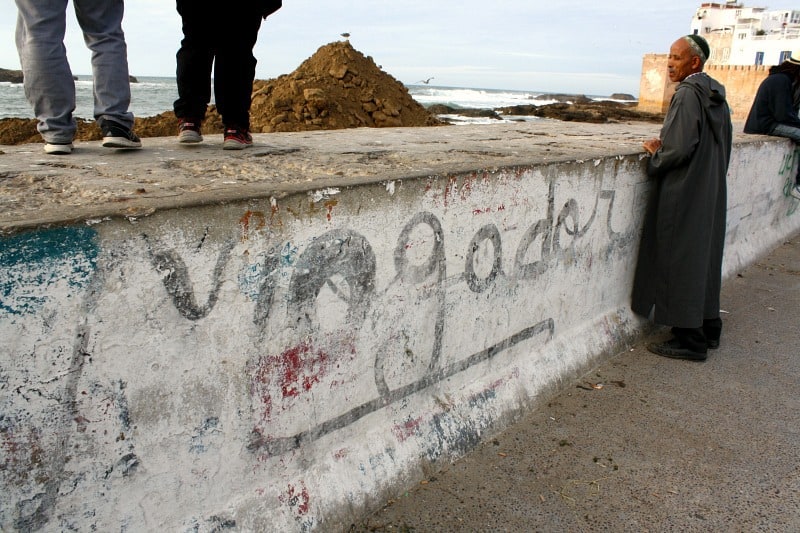 Hamid was five when he started to work with his father. He would do small jobs like clean up the boat or use his small, deft fingers to untie knots in the line. As he got older he was expected to do more. While he can read and write, school was secondary. His place was on the boat. “I wish I could have gone to school but I knew I had to help. If we wanted to eat, it meant we had to work. From a very young age I knew this was how it was.” He’s not alone, this story is common among men (and women) in Morocco. 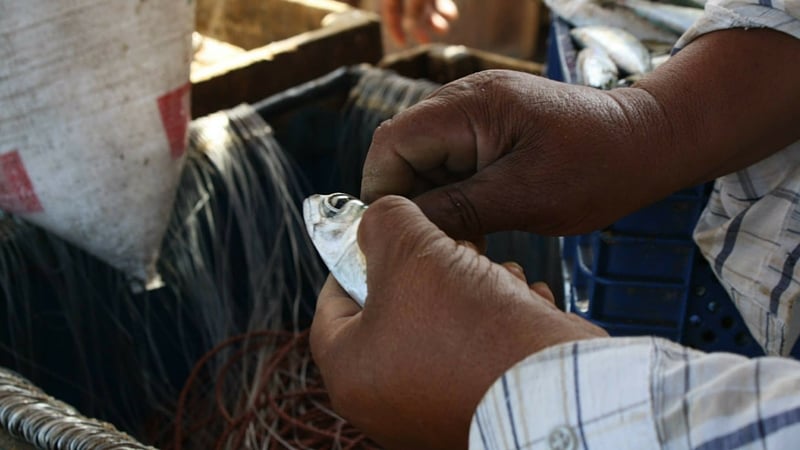 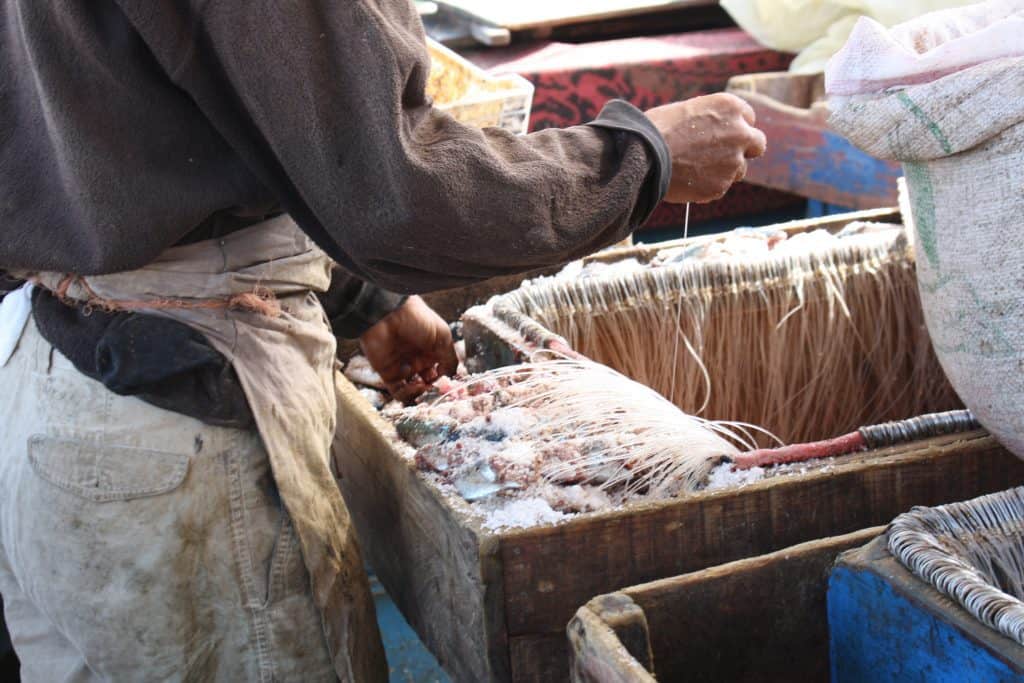 Walking the long pier, dotted with small tables each lined with the day’s catch, it’s obvious these are not commercial fishermen. A few men or women manning the table, haggling over the price of a sardine, shark, or eel. Their clothes are stained with the residue of the industry, dirty shoes or flip flops on their feet. It’s hard work to strike a deal in the souk but in the fish market it may be even harder. Moroccans visiting from other cities and locals crowd the pier when a boat comes in, waiting to see what will come off and offer the best prices for the freshest catch. The trick for the fishermen is to get the best price possible and have nothing left by the time the crowd thins. Any fish that remain will be taken home and eaten or possibly sold the next day – but what people come to Essaouira for is to eat the freshest fish, not day old seafood. 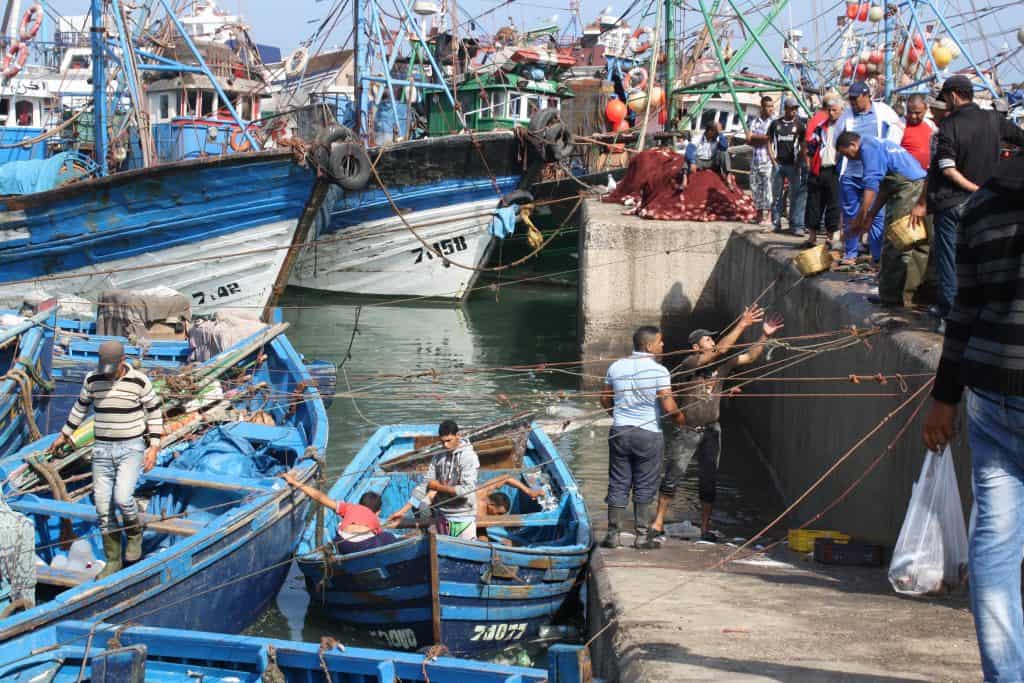 While those iconic blue boats and promises of tender grilled fish will continue to sing a siren song enticing people to Essaouira, the future may not be as it has always been. Hamid told me, “the work it’s not hard. We know how to prepare the lines, to fix the nets, and where the fish are. But, there aren’t as many fish anymore. It takes us longer to bring in enough to pay for the gas and take something home. We have to charge more because there just isn’t the same supply. I used to have a deal with someone who would bring fish to Marrakech everyday but they cancelled it because I had a hard time meeting what their need was. This life is not easy but it’s what we know.”

What was missing from the port? The sight of children who presumably are in school thanks to Moroccan law requiring children under the age of 16 to be schooled. Many parents don’t want this life for their children knowing the troubles they themselves face. Those foamy Atlantic waters continue to churn rocking perhaps a bit too hard to quiet their child to sleep. 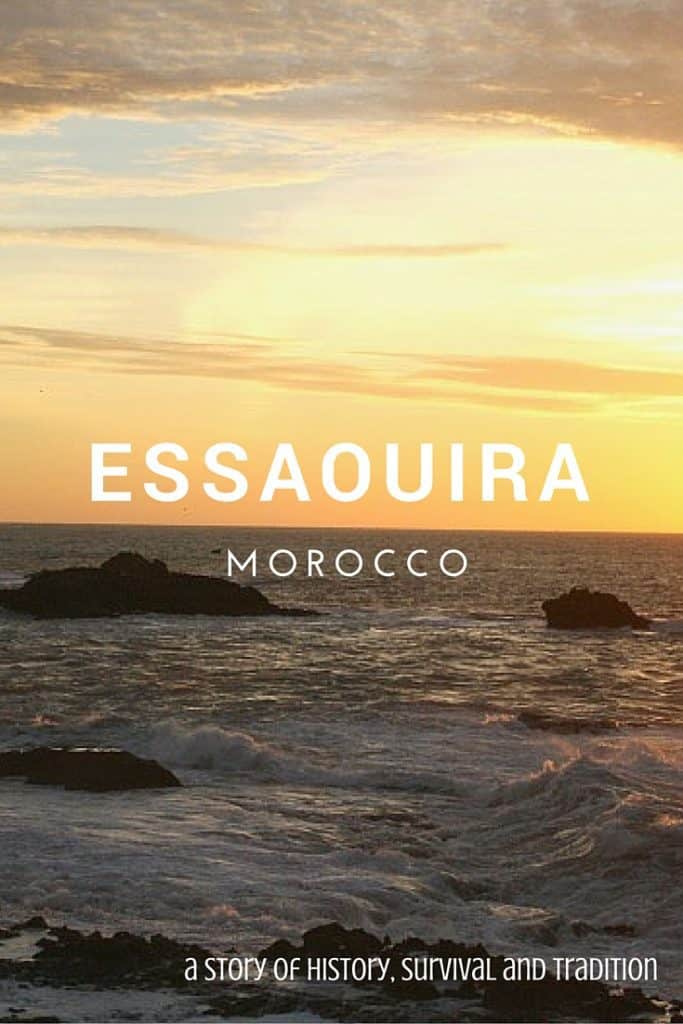 Super article, thanks for all your time.. there are many hidden gems in Morocco and i enjoy exploring the stories behind people.

Wow--the juxtaposition of the beautiful sea and land with the hardship the fishermen face is a powerful one! I hope some farsighted group starts finding ways to restore the balance between people and nature so the fishermen will be able to continue their way of life after all.