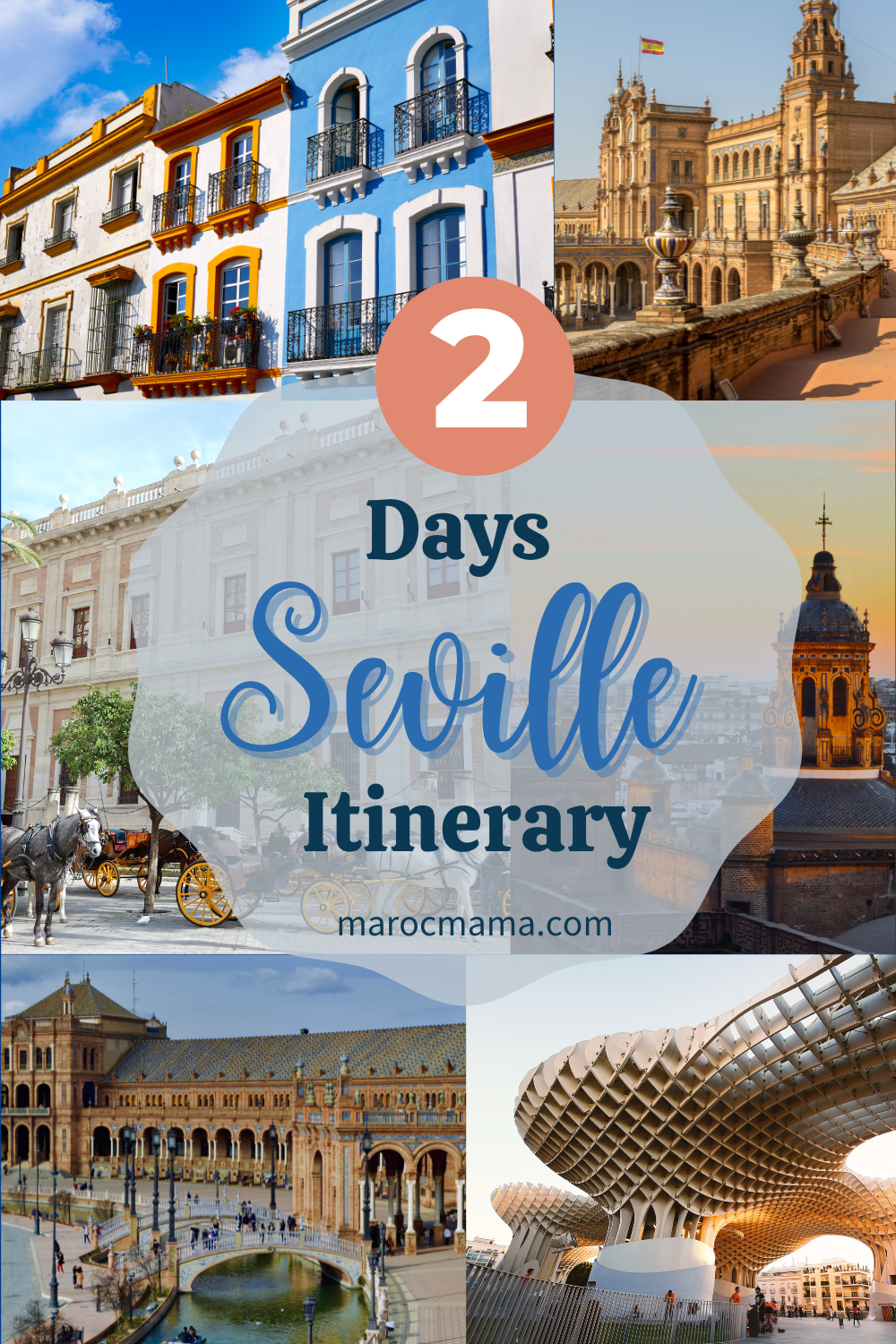 There are many beautiful places to visit in Spain but where should you spend your time? I’ve put together this 2 days in Seville itinerary for you to consider as a part of your Iberian adventure.

Featuring perfect weather almost year-round, historical buildings that date back to Roman times, and architecture that displays a plethora of cultures, Seville, Spain is, without a doubt, one of the best places to visit on the peninsula.

A visit to this incredible city will have you eating tapas and drinking till you drop, discovering some of the most striking examples of Mudéjar architecture, and uncovering thousands of years’ worth of history as you stroll through its street.

Moreover, Seville is also a perfect place to land in order to discover some of the best destinations in Andalucia, start a Southern Spain itinerary, and even plan a full-on Spain-Morocco trip.

If you’re currently planning a trip to Seville but only have two days to explore the city, here is a perfect 2 days in Seville itinerary you can follow in order to get the most out of your time here.

Day 1 of this 2 days in Seville itinerary will be dedicated to exploring the main attractions of the city and uncovering its history. Throughout the day, you’ll get to visit some of the main icons of Seville, including the Giralda Tower, the Alcazar, the Cathedral, and more.

La Giralda and the Cathedral

Rise early and head over to the Giralda, a bell tower and one of the biggest landmarks of Seville and the entire Andalucia region.

The Giralda is a 342-tall tower that was once the minaret of a mosque. It represents the Muslim rule of Seville as well as the Catholic Reconquest of Andalucia. Today, visitors can climb up the ramp to the top of the tower to enjoy panoramic views of the city from one of the most ancient buildings in Seville.

After climbing up the tower, head over to The Cathedral, which is the largest Gothic cathedral in the world and a visual representation of when Catholicism took back control of Seville after the Moors. It was built over the remains of a mosque.

You’ll need about 90 minutes to explore the Cathedral and the Giralda Tower. During this time, you’ll get the opportunity to see Christopher Columbus’s tomb, check out numerous works of art, wander its gardens, and even hop over to the rooftop for glorious views of the city.

Next up on the Seville itinerary, you’ll get to explore a wondrous example of Mudéjar architecture that will take you back in time to when the Moors ruled the city.

The Royal Alcazar is a UNESCO World Heritage site and was constructed during the 700s to act as a royal residency and fortress. Up to today, the Royal Alcazar is still used by kings and queens, making it the oldest palace in the world to still be in use.

Allow a couple of hours to explore the Royal Alcazar, including its numerous lavish rooms and the many important works of art it houses. You’ll also love getting a respite from the city at its many courtyards and gardens!

Perched on the Maria Luisa Park, Plaza de España is one of Seville’s biggest icons. It displays various architectural styles from different times as well as tile art that depicts the different provinces of Spain.

The plaza is absolutely humongous and it will take you at least an hour to fully get to know it and its canals. Additionally, you can also rent a boat to explore the canal around the plaza and walk around the park for a peaceful respite from the city.

Make your way to the riverfront to Torre de Oro, which was built during the Middle Ages to act as a prison and military watchtower.

These days, Torre de Oro is one of the biggest symbols of Seville and it is also home to the Naval Museum, where you can see historical monuments, boat replicas, nautical letters, and much more.

To finish off the day of your 2 day Seville itinerary, see the city and its historical highlights in a new light by booking yourself a rooftop walking tour that will have you standing atop some of the most iconic buildings of the city.

This 2-hour long tour will have you standing above the Cathedral and the Giralda to get 360-degree views of the Jewish Quarter and the river before fishing off the evening with a complimentary drink.

After a day spent exploring the highlights and learning all about Seville’s past, it’s time to dedicate the following 24 hours of your 2 day Seville itinerary to its arts and food scene.

The Archivo General de Indias is an incredible museum located inside a stunning UNESCO-listed building.

During your visit, you’ll get to learn everything about the history of the Spanish Empire around the world through artworks and documents that illustrate important events such as the discovery of the American continent and various expeditions throughout Asia and beyond.

Head over to the Triana neighborhood on the opposite side of the river to check out its main market. Here, you’ll find a world of mazes where you can find fresh produce such as artisanal cheese, local delicacies, fresh meat, and more.

Additionally, you can book a tour that includes a guided walk through the market as well as a cooking class where you’ll get to learn how to prepare a 3-course Spanish meal while drinking sangria! Read more about the tour here.

If you’re not up for cooking, you can instead opt to take a tapas tour through the neighborhood instead, where you’ll get to visit several tapas bars and bodegas. Read more about this tour here.

After exploring Triana through your taste buds, head over to Las Setas, a humongous structure made up of parasols that resemble mushrooms.

For dinner, book yourself a private food tour of Seville where you’ll get to visit various restaurants and bars in order to taste the most emblematic dishes of the Andalucia region.

Gazpacho, Serrano ham, Andalusian sheep cheese, and fried cheese are just a few of what’s on the menu, not to mention you’ll also get to taste several wines from the region! Read more about this tour here.

To end a perfect 2-day Seville itinerary, cap off your trip by attending an authentic flamenco show.

Since Andalucia is the birthplace of flamenco and Seville its capital, you’ll find options galore all over the city. Some of the best-rated ones include the show at Museo de Baile de Flamenco and the one at Casa de la Memoria.

Find more Great Things to do in Seville