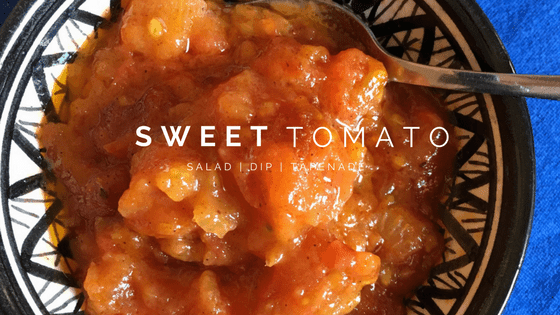 Moroccan salads are funny, because to most people they aren't really a salad at all.  The first time I ate za'alook or taktouka I just assumed it was some sort of cooked vegetable side dish. The longer I stayed the more often I began to see different cooked vegetables and soon I learned these were in fact Moroccan salads.

See salads here, they're not green salads. 99% of the time they're cooked vegetables and by cooked I mean cooked well beyond the point I consider done. I'd love to understand more about why this is the de facto method but the only answers I've ever gotten are, “because that's how you cook them!”

I'm sure there was some reasoning to it in the past, perhaps to use vegetables gone past their prime or cook out germs but I've never found any solid proof of this. Whatever the reason, it's just the way things are today! 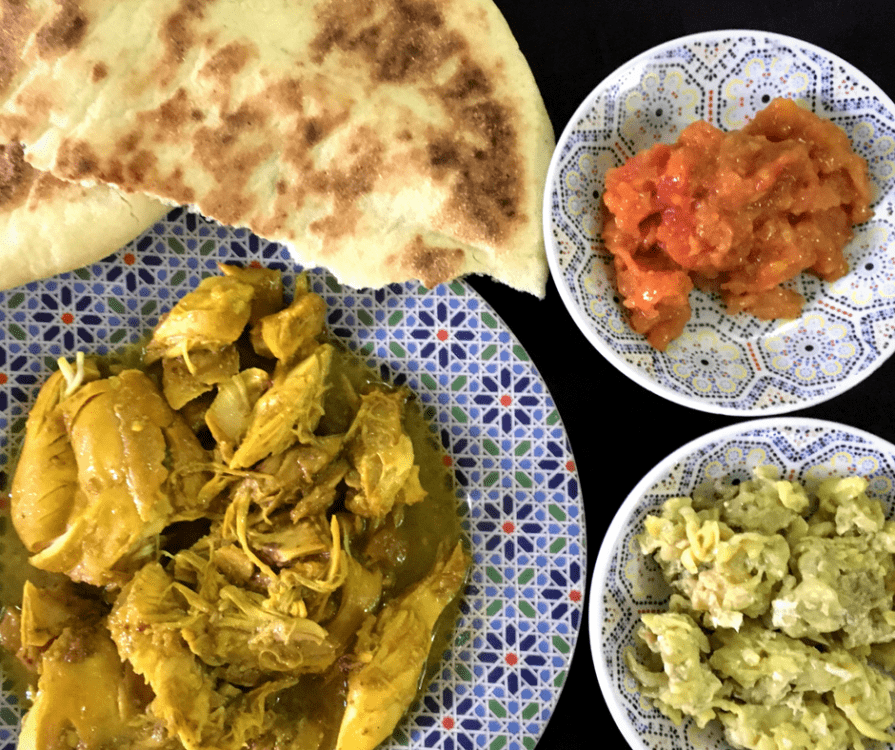 Over the years I've learned to make dozens of different varieties of salads because there are so many! I've also learned which salads pair best with which tajine and those salads that I can make fast and which ones take more time to prepare. This salad however was completely new to me.

M and I did a cooking class at Dar Les Cigognes in Marrakech and this was one of the salads we made. That was great because it was new to me, something I wasn't sure they'd be able to pull off – but they did! I coyly asked for the recipe and while recipe transmission in Morocco is from brain to fingers, I was able to jot down the basics and recreate this later.

I'm still hesitant to call this a salad because frankly it's just not. At best, I'd call this a tapenade or for those of us that are a little less fussy – a dip. It's got a million different uses; eat it as is with some bread, throw it on top of some bbq chicken, add it to a buddha bowl, slather it on a piece of bread and top with goat cheese – you get the idea.

Make it and you'll understand what I mean! 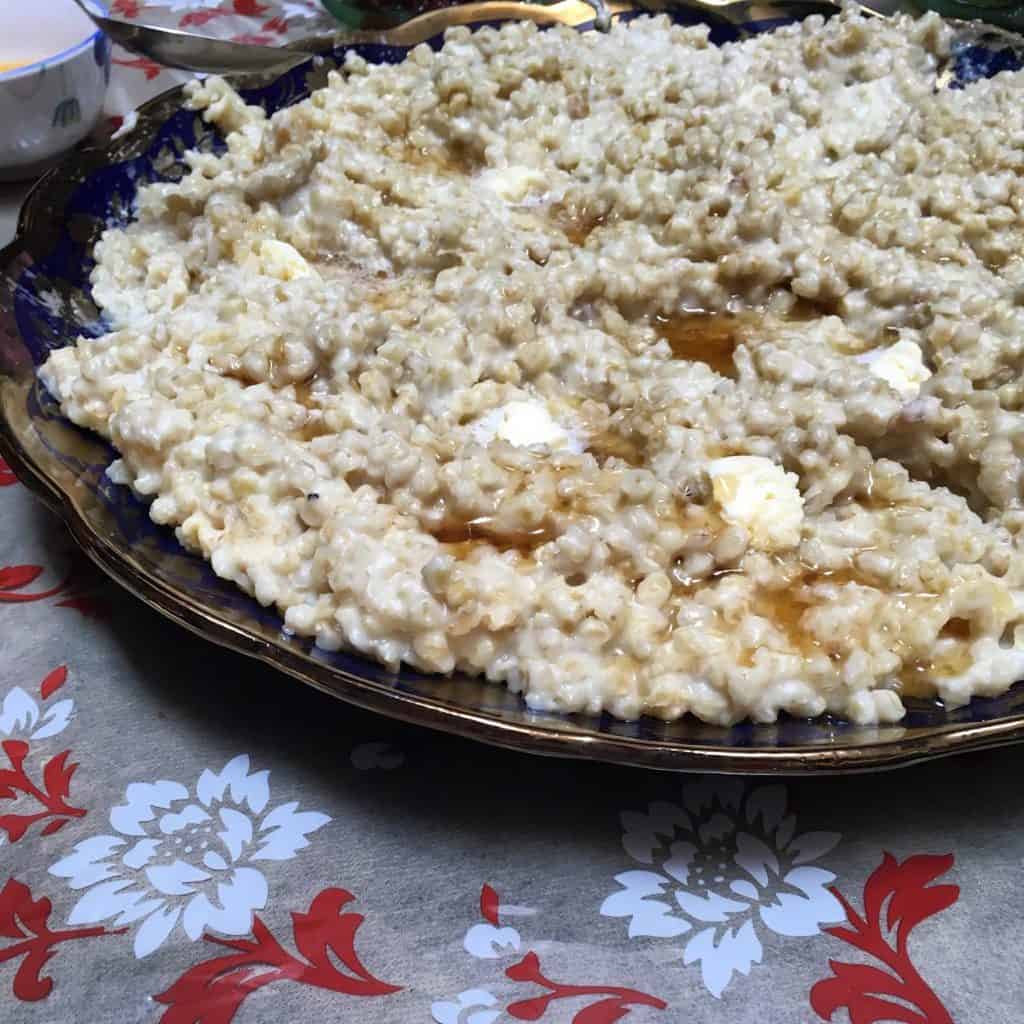 Winter comes slow and late to Marrakech. One day we're sweating, wondering when the heat will finally break and then suddenly there's a rain storm one day that snaps the weather awake to realize it's time to change seasons. Reluctantly the weather wavers for a few weeks. Alternating between those scorching hot days and dreary, rainy ones. A sandstorm might blow through and then we're lurched into winter.

But this too is beautiful. 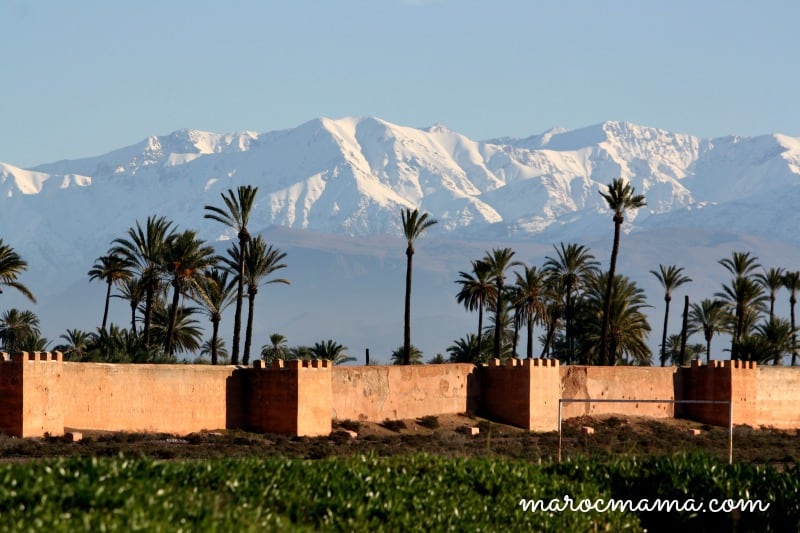 The haze in front of the High Atlas lifts, giving way to the beautiful mountain backdrop that makes my heart sing. It's a sight I wait for all year. Rarely do the mountains appear until they're capped with snow, leaving many people to believe they have snow all the time (they don't). The clear, sunny winter days are what I love waking up to. I just really hate leaving my bed!

Few people, including us, have indoor heating. We really don't need it. Winter will only last two or maybe three months and it will never get to freezing – even though some days feel like it. An extra blanket on the bed, a space heater tucked under the desk, and taking advantage of every chance to warm up the house when the sun shines make it possible. You see Morocco is a cold country with a warm sun. The sun changes everything and even in the middle of winter is warm. 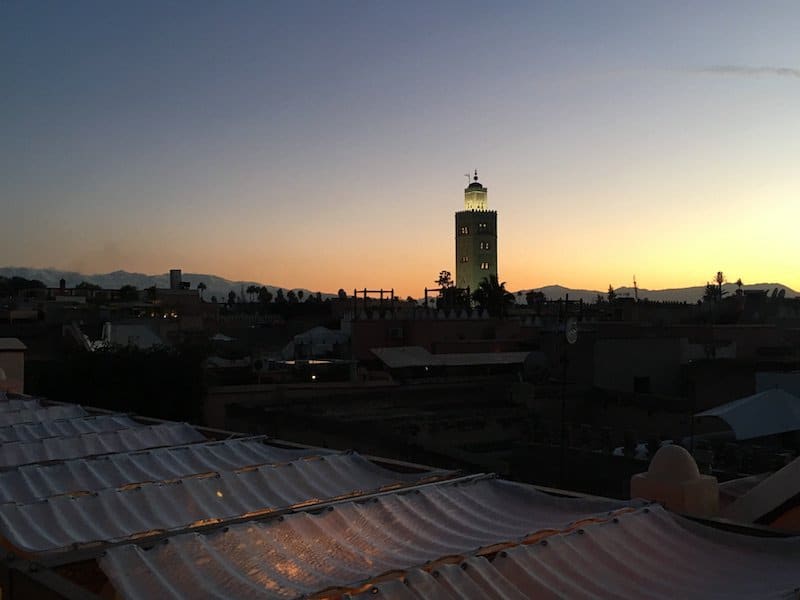 Our morning start a little later now but it's still just barely light when the kids get up for school. I love a warm bowl of oatmeal in the morning with nuts and brown sugar. But, I also love the Moroccan version of oatmeal – that's not made with oats at all – called hrbil. Normally it's only made for special occasions. It's always on the table the morning of Eid al Adha and Eid al Fitr. But, I've also made it and saved it in the refrigerator to heat up the next day. It's always better right after it's made. 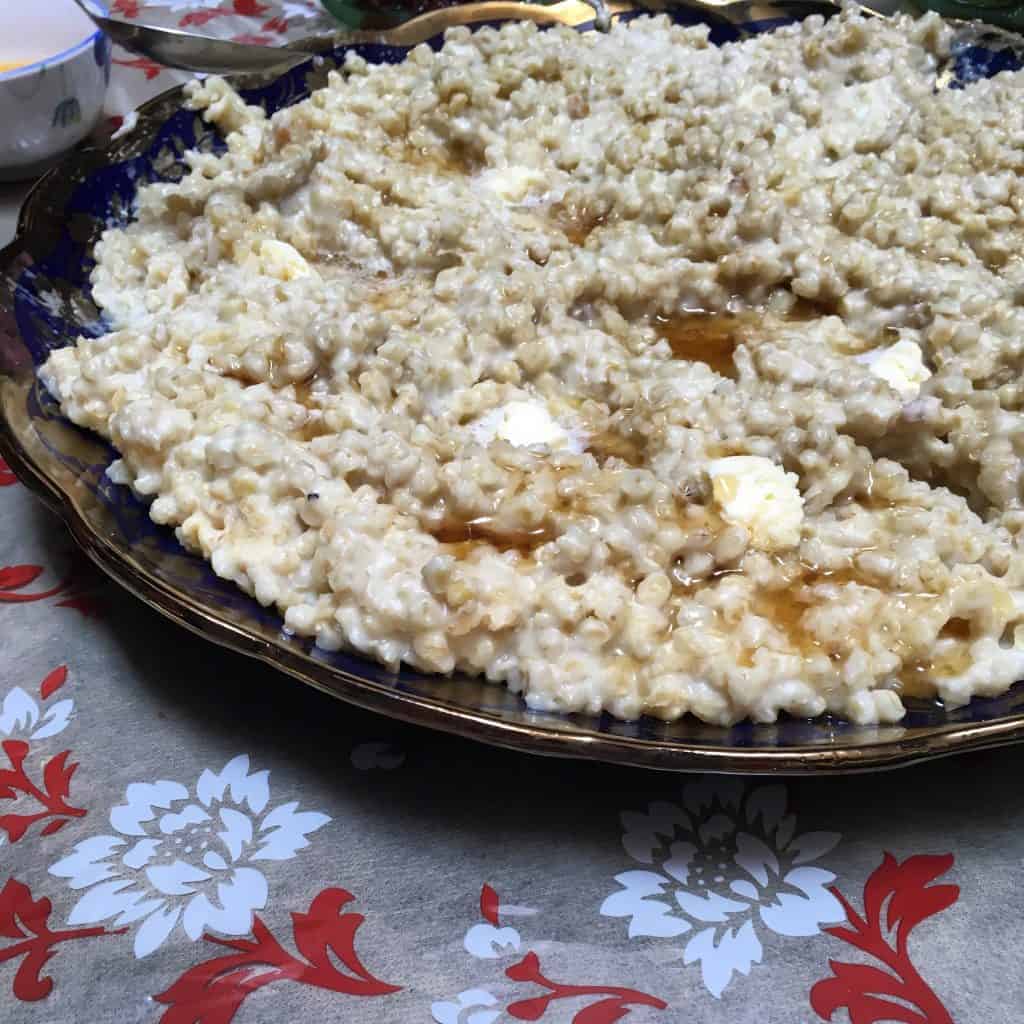 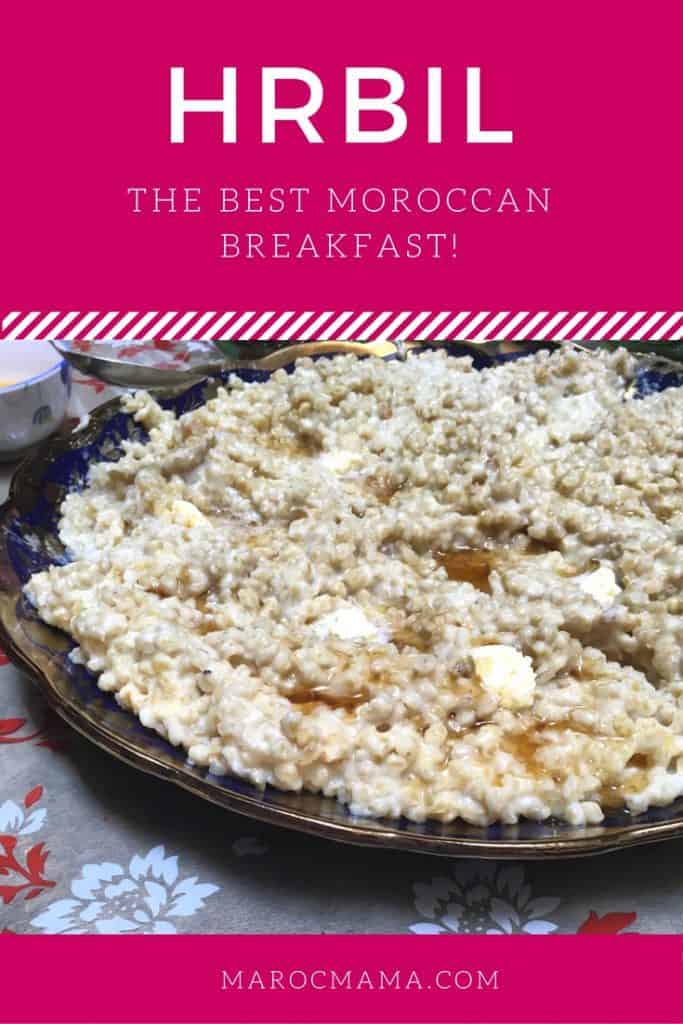 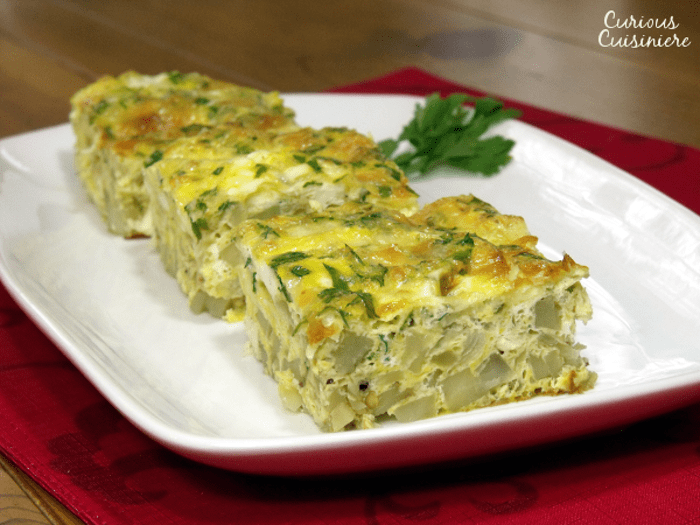 Today's guest post is from Sarah of Curious Cuisiniere. She put together this Tunisian tajine that is a far departure from the Moroccan version! You can find more great recipes on her website!

We loved Amanda's idea to get other bloggers around the world together to create dishes from the Arab world for Ramadan. And, we are incredibly excited to be sharing a recipe from Tunisia with you today.

I'll be the first to admit that we didn't know much about many of the countries on the list that Amanda gave us. But, each of the countries we researched from the list had one thing in common: an incredibly unique and proud food culture. It made us want to dive even more into the cuisines of this area because it is a wealth of flavors and dishes that, in the States, we haven't been exposed to.

Take the recipe we're sharing with you today. When we hear the word tajine, we think about the Moroccan stew that is cooked in a vessel by the same name. However, in Tunisia, tajine refers to something completely different. In fact, it is more of a spiced quiche or fritatta that is served cold as a finger food or appetizer.

The Tunisian tajine starts with a mixture of meat, onions and spices that is sautéed. A starch is added (potato or bread crumbs) and then, off the heat, it is combined with fresh parsley and a mixture of beaten eggs and cheese. Then, it is baked until firm.

The spices in the meat fill the house with a wonderful aroma while it bakes. And, while it is traditionally served cold, we couldn't wait and dove right into the dish while. We loved the combination of chicken and potatoes with the light creaminess of the eggs and cheese. With such unique spices, this would make a wonderful brunch dish here in the States, when you're looking for something a bit different than the standard egg and bacon breakfast bake.

In today's post we travel to Africa, Nigeria specifically, to enjoy a rice dish. Oddly enough rice isn't big in Morocco though you'll find all sorts of rice dishes around Africa and the Middle East. This recipe is from Sadaf who blogs at My Culinary Adventures where you can find some great recipes for Ramadan and beyond. You can also connect with her on Facebook, Twitter, Instagram, and Pinterest. Enjoy!

My in-laws are of Indian origin but spent nearly three decades of their lives in Nigeria before moving to the US around fifteen years ago. Like his brothers, my husband was born and brought up in Nigeria. During nine years of my marriage I have heard some fascinating tales of Nigerian culture and the wonderful times that they enjoyed there.

END_OF_DOCUMENT_TOKEN_TO_BE_REPLACED 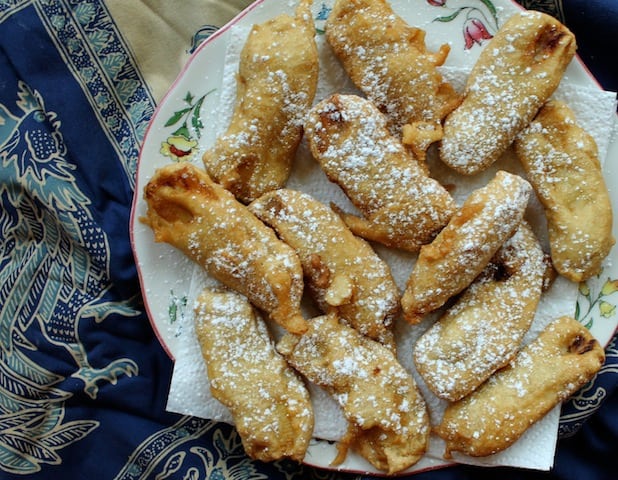 Today's post is from my friend Stacy of Food Lust People Love. I was so excited that she and I had the chance to meet in person this May when I was in Dubai. Stacy graciously escorted me around to show me some of the sights and delivered me to the airport. I was excited when she chose to share this banana recipe as it's one of the things I discovered from a street vendor in old Dubai. Basically, they're delicious! You can connect with Stacy on her blog, Facebook, Instagram, and Twitter.

END_OF_DOCUMENT_TOKEN_TO_BE_REPLACED

Today's guest post is from Kaloud “Kay” of A Crafty Arab. I first learned about her site several years ago when few bloggers were talking about Ramadan. She is a Libyan American artist who creates art to promote a positive image of Arab culture. I have to admit I'm not nearly as creative as she is when it comes to crafts but am always inspired to try something new with the kids when I visit her site. Today she's sharing a Libyan recipe for sharmoula. If you've ever wondered “how different can Arabic really be from country to country” this is a great example. In Morocco sharmoula (or charmoula) is a marinade with completely different ingredients than shown here. This dish might be called taktouka in Morocco, and shakshouka in Lebanon and Israel/Palestine. So yes, it really is THAT different! Follow Kay on her site for updates on the Ramadan challenge as well as Facebook, Pinterest, and Instagram. Enjoy!

Libyan sharmoula is a close cousin, twice removed, of the Italian bruschetta.  Considering Italy’s colonization of the Libya people in the early part of the century, there are many dishes that have a heavy influence from our conquering neighbors up north. And yet, many of the dishes had to be adjusted to local growing vegetation by the Amazigh and Arab tribes that lived in the dessert, mountainous and coastal regions of Libya.

Traditionally sharmoula is eaten by scooping it’s deliciousness with pita bread, or French bread.  And like most Libyan food dishes that are eaten by hand (bazen, asida, etc) it is a shared family meal, although if you are a guest in a home, you may request a spoon.

Sharmoula is usually produced by the youngest members of the family who are just learning how to prepare meals.  It only has a few basic ingredients that can be found in most refrigerators and takes hardly any time to prepare.

It can be eaten alone as a meal, or to compliment a rice or cuscus dish, and you will find it a staple at most Libyan meals during Ramadan.

My two older daughters make it for us in the summer from the tomatoes in our garden, keeping the tradition alive of when I would collect tomatoes from my jaidie’s (Libyan for grandfather) home garden.

Bread – Mini pita pockets are pictured, but you can use French bread also

Cut the ripe tomatoes into very small pieces.  Then cut them smaller.  You can also use your fingers to mash them; just make sure the pieces become fine.

Having spent most of my childhood chopping sharmoula tomatoes nightly, the significance of the tomato pieces being tiny can not be stressed enough.  If the pieces are too big, they will be harder to scoop later with your bread.  Plus it adds to the texture that is so vital to North African cuisine. 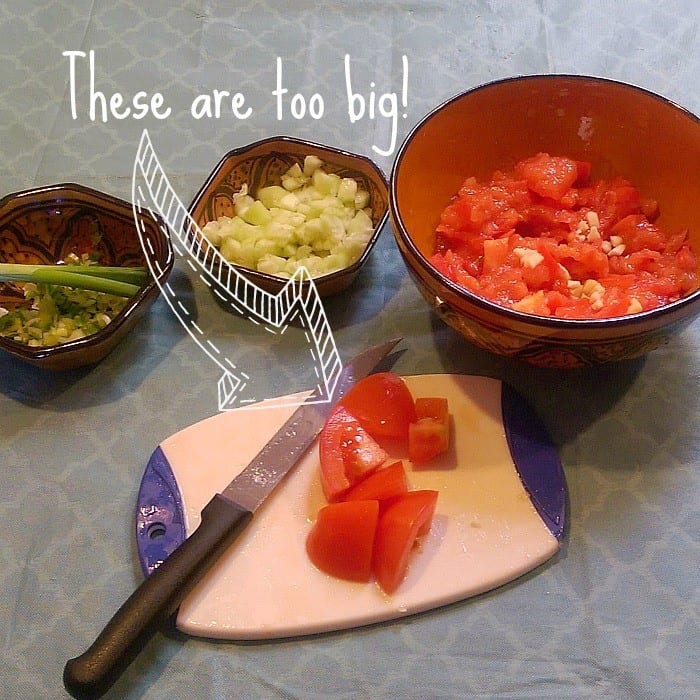 Also cut the green onion and cucumber and garlic into fine, small pieces.

Add the salt, pepper, olive oil and half a lemon to taste. 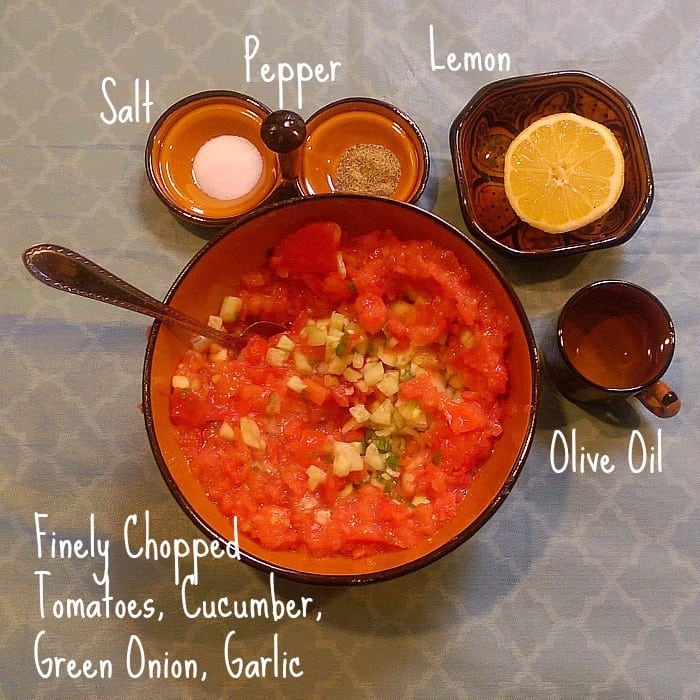 It’s traditional to add jalapenos to Libyan sharmoula to spice it up a little but I’ve made it optional here.  Another idea is to cut it up into large pieces that can be picked out, but you’ll still get the spiciness of the flavor. I hope that when my eight year old is a little older, we can start adding it to our sharmoula too.
If you do add the onions and/or olives, make sure they are also cut into small, fine pieces.

As we say in Libya: Sah’ha (To Your Health) And Ramadan Kareem (Blessed Ramadan)