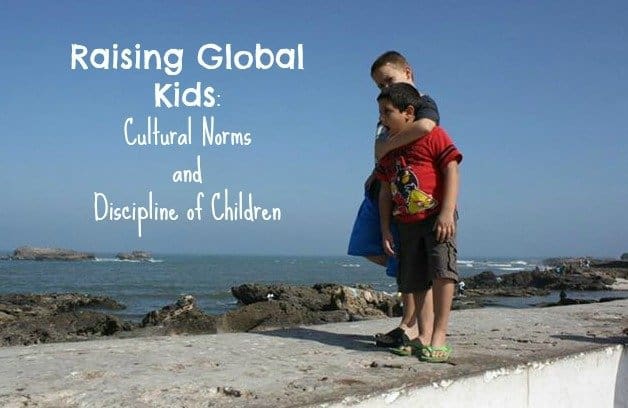 There’s an old addage “when in Rome, do as the Romans do.” but one thing I’m learning is sometimes “doing as the Romans.” really isn’t the best idea – especially when it compromises your values. We live in an upstairs apartment in my mother-in-laws home and there are always a lot of people around. One of the issues with this is that a lot of kids + a lot of parents = a lot of personalities. I’ve noticed that kids here, well at least the ones around us, physically fight a lot. They think nothing of slapping each other on the back of the neck or head, especially when they are upset or angry.

Parents more or less stay out of it, until it escalates. Then the parents will physically punish the child. Maybe with a shoe or with their hand. After seeing this cycle a few times I scratched my head. My kids aren’t perfect and they do their fair share of arguing but I don’t think it ever crossed their mind to physically attack a child they are playing with when things go awry. I casually mentioned to MarocBaba after seeing a kid-vs-kid and then parent punishing child cycle that I can’t see our kids ever doing this.

I’m not a psychologist but the whole behavior issue makes sense. If you as child see that when your parent is angry with your behavior or actions they exert physical punishment, why wouldn’t you do the same thing in a child-child context? Parents by physically punishing their children when they show this behavior reinforce the child’s actions. These children then grow up and do the same thing to their children, or their spouses. It’s all very confusing.
I don’t believe in physically punishing my kids. They might have gotten a single spank on their bottom when they were smaller if they really misbehaved but that was as far as it ever went – and very rarely at that. I’ve found that there are other ways to show my disapproval, and/or discipline kids for bad behavior. Even though MarocBaba was raised in Morocco we’ve never really differed when it comes to disciplining our own children. I know many other cross-cultural relationships where this is a major issue.

I really don’t want this to come off as judgmental. I understand that people do what they have learned to do and don’t neccesarily see the connections. I know that they are equally as confused about our lack of physical discipline (though our children haven’t shown any reason to do this -yet). In my polite, individualistic American sense I don’t comment on how other people choose to parent however, Moroccan society and even more so family structure is community based so they don’t hesitate to share their opinion. I can honestly say that I will not now, or ever adopt this practice in my home or with my kids. I respect my children, they respect me, and I believe they are much more at ease knowing this. I hope that teaching them there are other ways to solve their problems will help them to become happier and healthier adults. Moving into another culture, especially one where there are family ties requires the ability to be flexible and adapt however, I am also learning what I will not compromise – this is a line in the sand for me.

Where do you fall on this issue? Have you been challenged in a cross-cultural parenting situation on a resolution to this issue?

Hi Amanda, I found your blog while researching corporal punishment in Morocco. Thank you for your insightful observations. A reader of my blog asked me to sign a petition to end the practice. Would you consider sharing this with your readers? All my best, Cara Zara

[…] While in Morocco a travel blogger observed “I’ve noticed that kids here, well at least the ones around us, physically fight a lot. They think nothing of slapping each other on the back of the neck or head, especially when they are upset or angry. Parents more or less stay out of it, until it escalates. Then the parents will physically punish the child. Maybe with a shoe or with their hand.”  Visit Amanda’s blog MarocMama  for her full article Raising Global Kids: Cultural Norms and Discipline of Children […]

The many times I have been in Morocco, the physical nature of the kids has been hard for me to deal with. I am sure its just because I didn't grow up like that or see much of it. I agree that it takes major adjustment to get used to that manner of discipline. I have spanked my daughter, but I use it as a last resort. Her father and I refer to it as "recalibration". As my daughter starts private school here in Marrakesh, it should be interesting to see if her teachers use this type of punishment.

Make sure to talk to the teacher/administrator ahead of time. We made it very clear at our children's school that we did not consent to any physical punishment.

Hi Amanda HOpe things are getting a little better for you. As I mentioned to you before we had the same issue in the school we set Malika to and this was a private school. I was to scared to leave Malika! My husband Omar has a house in Essaouria, in the medina; it needs some work but if you ever wish to escape your in-laws, Essaouria is a pleasant place to live. I remember staying with my in-laws and trying to get the girls down to sleep at night - the neighbours would be in and out constantly and it made it extremely difficult to get them to sleep. As you say switching from individual parenting to the adage of "it takes a village to raise a child" is a massive change. Take care Amanda

Thanks for checking in Emma - yes things are getting better. It's nice that the kids are in school and we're able to establish more normalcy and routine. While we worried how the kids would do with school they've done ok and this makes mom and dad more at ease. I've also gotten more time to get back into my work. As things come into place I am finding it easier to relax and be at peace. Problems don't seem quite as irritating. We went to Essaouaira this past weekend for a little getaway. It was much needed and refreshed us all. It's such a lovely place.

My family is also Moroccan-American living in Morocco. Luckily, we don't live with the inlaws, but we actually have the opposite issue anyways. Whenever I put my children in time out, I am always told "khalia, khalia" - Let them be, they're just kids!

I do see a lot of physical violence between children playing outside, and my kids don't enjoy playing with the neighborhood kids because of it. Probably the biggest place that corporal punishment has become an issue for us is in the boys' school. The teachers do use a ruler on the kids hands from time to time. My kids have never had it done on them, and we have talked to the school about our dislike of this practice. However, my oldest son talks about it regularly and I know that it bothers him. I have struggled with whether or not to pull him out because of this, but I know I will probably have the same issue in any other school with the same curriculum. The more expensive, elite schools are all French and English centered, which is not the curriculum we have chosen for our children - their school is very Arabic centered.