Every year around this time it’s impossible to escape the media reports, specials, and news focused on September 11, 2001. Having children who were not alive when the events happened but are now coming of an age where they begin to understand what is being seen and heard puts Muslim parents in a hard spot.  How much do you share about what happened and how do you do it? Last year my oldest son (3rd grade at the time) came home from school on that day and began asking questions – I knew we had missed the boat in talking to him, to prepare him, before others did.  It’s important for all parents to talk about events like this with their children but it’s especially important for Muslim parents.  Every conversation will of course be altered for the child’s age and level of understanding.  Here are some tips if you decide to talk with your children on this subject. 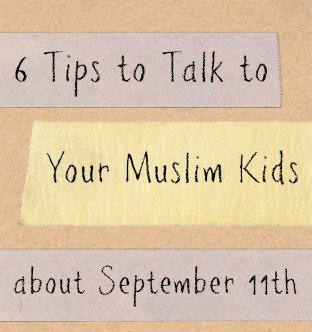 1) In plain language explain what happened. Something like, “In 2001, before you were born, there were two very big towers in New York. Some men took over airplanes and flew the planes into the buildings.  The buildings collapsed and a lot of people were killed. There were two other planes, one that was crashed into the Pentagon and one that went into a field. The men who took over the plane were bad people and they were also Muslim.  We know that Allah {God} has told us it is very bad to kill people. There are a lot of people who are not Muslim who don’t understand why this happened and they are sometimes angry with all Muslims for what happened. I’m telling you this because I want you to know if you meet someone who is angry or sad about this, why they feel that way.”

2) Tell them your 9/11 story. I think showing your children your connection to the event is really important because it makes it less abstract. I have told my children that I was in school when it happened and that even though it was far away from us in New York it was very scary because no one knew what was happening and it was the first time something so big had happened in the United States. I told them that everyone was very sad, many people cried and struggled to understand. I also tell them that some people got even more angry with Muslim people, or people they thought were Muslim and verbally and sometimes physically attacked them. If you have a story about something that happened to you then share it with them.

3) We’re American too.  Affirm to your children their identity.  Yes we are Muslim but I don’t want my kids to feel like they have to choose one side or the other.  It’s ok to be sad about what happened. There are and will be people who want to segregate us as Muslims, to take our rights as citizens away but children need to know they have just as many rights as anyone else and the acts of these people does not somehow erase their identity.

4) They don’t speak for us. By they I mean the people who perpetrated this crime and the people who blame Islam for the actions. There are many people and powers trying to write the narrative that is 9/11. I want to reinforce in my children the strength to stand up to either side and say, “No, that is not who I am.” I pray that raising them in a multicultural, mutli-religious environment will help them to create the identity of who they are and in turn give them the strength to stand proud in that.

5) There are bad people everywhere. This is a little touchy because on one hand you don’t want to scare your children, but on the other hand it’s important they understand reality. There are bad people who steal kids, there are bad people that steal things from other people, and there are bad people who kill other people. They all have different reasons for doing it, and many of them feel justified in their actions through their faith convictions (whether right or wrong), their life circumstances, or some other contributing factor.  This is a good time to bring up some analogies. For example, if your friend said “we can steal this candy from the store because Sammy did, and now he has candy and we don’t,” would that make it ok? No it would not because you know that taking something that isn’t yours is always wrong.

6) Be proud of who you are.  I don’t want my children to ever feel ashamed that they are Muslim. But, in an atmosphere of fear and Islamophobia they may want to hide their identity.  To some degree this may be a coping tactic, especially with young adolescents. There are so many good and amazing things Muslims have done, it’s important to reinforce this in our children. When a child is confronted by someone who may want to blame them for what happened on 9/11 they can provide something to counter it. “What happened makes me sad too, but did you know Muslims invented algebra?” Please note this is not meant to discredit the enormity of the event but to show one terrible thing does not negate the positive contributions that have been made.

There are many other topics that can be brought up in this conversation and should be targeted at your child’s age and experiences. Children who live in a big multicultural may not face the same kind of issues as a Muslim child in rural America might. No matter where you live, it’s important to have this conversation with your kids before someone else does.  It can provide them the information and tools they need to understand this difficult situation.

What other tips would you share for Muslim parents having this conversation with their children?

This is the RN from Kansas City. Just wanted to let you know my patient loved his Moroccan tea- he has now been discharged and is doing better. Also- I love your blog and really enjoyed this post, very thought-provoking for me. As a Christian who has had little exposure to Islam and Muslims as a whole, I had not thought of the difficulty you and others have undoubtedly faced when sharing these facts with your kiddos without scaring them and also keeping them strong in their faith. Cheers to you!

This was very eye opening , as a non-Muslim. I love the way you explain the important points in a way that kids can understand.

Great post. I think it can be applied to explaining 9/11 to kids in general. Definitely a good idea to address at home the possible stereotypes they may encounter while discussing the subject somewhere else.

Thanks - I'm glad others have seen this may be useful to start the conversation with any child.

Well done Amanda for bringing this up.

Amanda this is an incredible blog post !!! Being a muslim family during 9/11 was really tough but now 13 years have gone by and our family has grown. There are many of our family members who like your children weren't even alive on that day. These are 6 fantastic tips to get us talking. I'll be sharing this everywhere. I just wanted to share that my eldest daughter at this very moment is visiting Morocco. She is simply loving it. Thanks again !!

Very glad you liked it. Also happy to hear your daughter is loving Morocco!