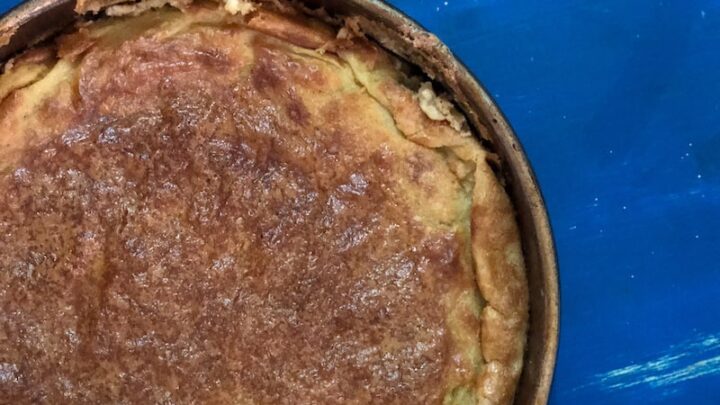 There aren’t a lot of chickpea flour recipes in Morocco, in fact this might be the only traditional recipe I’ve run across that uses it. Chickpeas aren’t as common in general as they are in the levant regions. They’re primarily used in couscous’, boiled and sold as a street snack, cooked on their own as a tajine or used in beef tajines.

The name commonly used in Morocco, kalinte or kalinti, is the word for hot in Spanish. However you won’t find this dish in Spain. It’s similar to Italian farinata and French socca. Socca is often made thinner and more crispy. Farinita is a little closer to the consistency of kalinti. You may also hear the names karane or karantika used depending on where you are.

I’ve tried to research why and how this dish came to be in Morocco. You’ll find it in the northern and eastern parts of the country but rarely anywhere outside that. It’s also eaten in western Algeria. But, the most surprising fact? It’s the “national dish” of Gibraltar where it’s known as kalantita! Perhaps the close proximity to Spain and the meshing of Spanish culture in the northern regions of Morocco and Algeria has something to do with this.

I have eaten it a few times in Tangier and also Chefchaouen and each experience is been memorable because of how rustic it once. Bought off a cart in the medina of Tangier with heavy doses of paprika and cumin. Slipped through the small window of a bakery/shop in Chefchaouen to the street still warm along with chemiya, a local semolina and coconut snack similar in texture.

One of the things I really like about this recipe is that it’s naturally gluten-free. There are VERY few items in Morocco that you can buy as is, off the street and not have to worry about gluten.

Sadly, my husband (who needs gluten free food) doesn’t enjoy this as much as I do but at least it’s an option! I also think this would make for great picnic food as it can be served at room temperature, eaten with your hands and you don’t have to worry much about it going bad.

The overall texture of this is similar to flan. You can adjust how thick or thin your slices will be depending on the size of the pan you use for baking. But do note the thinner it is, the faster it will cook. I found it best to really keep an eye on this while it cooked.

There’s a LOT of different ways I’ve found to make this but the base ingredients are chickpea flour, oil, egg, water, and salt. My recipe uses a few more items to build in a little more flavor.

How do you eat kalinti?

There’s options! You can eat it just as it is served hot or warm. You can add some cumin, paprika or harissa (or all of them) to the top. It can be stuffed into bread. You also could eat it as a slice of pie with a fresh or cooked Moroccan salad on the side.

I made mine slightly less traditional by including chipotle powder and liquid smoke. I wanted to add a bit more flavor and get some smokiness that you would normally get when this is cooked in a wood fired oven. But you can just as easily leave them off.

In a large mixing bowl add egg, olive oil, chipotle powder and salt. Mix for 30 seconds until a bit foamy.

Add half of the chickpea flour and keep blending making sure the mixture is smooth.

Mix in the milk and water, baking powder, and liquid smoke. Continue blending until everything comes together and there are no lumps. The final batter will be a loose liquid.

Use olive oil to coat the pan you will use to cook the kalinte. I used a 9” round baking pan. Make sure to get oil on all the sides and bottom. Pour the batter into the pan and carefully transfer to the oven.

Cook for approximately 40 minutes (may need longer) until the top is browned and it feels slightly like jello to the touch. You do not want it to be hard. The interior should retain a creamy texture.

This is best served warm with the toppings such as ground cumin, paprika or chipotle pepper. It's also good tucked into bread with a squirt of harissa. 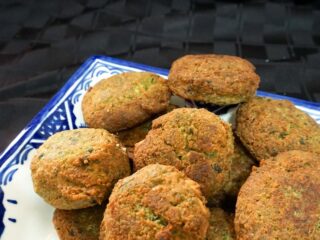 Easy Falafel You Can Make at Home
← Read Last Post 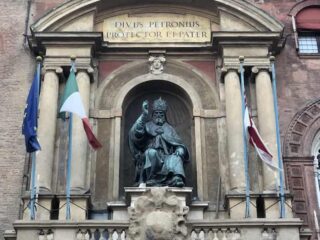