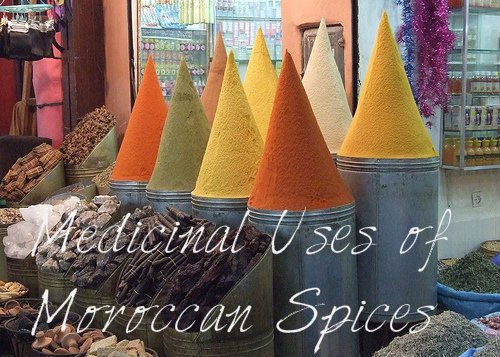 I’m kicking off a week of posts focusing on natural ideas and recipes.  I have been wanting to do these posts for a while. I was a total skeptic about traditional/natural medicine before I went to Morocco. I was a skeptic up until the day I had gotten a serious bout of digestive issues and couldn’t keep anything down.  My mother in law shoved a spoonful of cumin in my mouth and all of the nastiness stopped. Just like that.  Moroccan food is full of different spices and traditional medicine shops can be found everywhere in Morocco. Moroccan spices really are used for more than just flavoring food. Here’s a little rundown and history of some of the most common spices used in Morocco (note the Darija word in brackets) and their medicinal uses.

Cumin has been used as a flavoring and medicinal herb since ancient times.  Seeds have been found at archaeological digs dating to the 2nd millennium BC!  Ancient Greeks, like Moroccans of today kept cumin on their table much as other cultures do with salt and pepper.  The plants are grown and harvested during the hot summer months in Morocco. The seeds can be used whole or ground to powder to use.  This spice is heavily used in Moroccan cuisine.   It is supposed to increase lactation and reduce nausea in pregnancy. It also has been shown to be effective in treating carpal tunnel syndrome, as well as diarrhea, indigestion, and morning sickness. Cumin tea is also brewed.  A teaspoon of cumin seeds steeped in a cup of hot water for 5 minutes releases the healing properties. For indigestion problems a teaspoon of cumin powder swallowed directly aids in the reduction of symptoms.  While not always a pleasant taste in such high quantities, it does work! 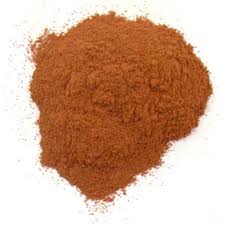 Cinnamon is another ancient spice. It is grown in Eastern Asia, primarily Sri Lanka, India and the West Indies but also in Egypt. Its use in Moroccan food is most likely attributed to Arab traders who brought it back from journeys to this region of the world. Medicinally cinnamon has a lot of good qualities.  It has been shown to help with the treatment of diabetes, and has properties that help with blood clotting and reducing cholesterol rates.  Perhaps the most important use in Moroccan cooking is that cinnamon helps with digestion. 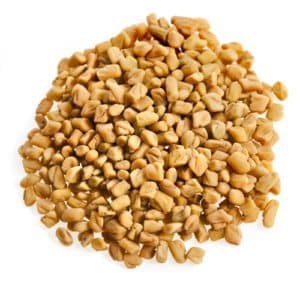 This spice has three different culinary uses; as an herb (the leaves are dried or fresh), as a spice in seed form and as a vegetable (the fresh leaves, sprouts and microgreens). Traditionally fenugreek is found on the Indian subcontinent but is common in Persian, Ethiopian and Eritraean cuisine.  Fenugreek is used in Morocco as a spice and brewed into tea.  The most common use is as an aid to lactation for new moms. Fenugreek is also used to treat heartburn and stomach problems. The most famous use in Moroccan cooking is Rfisa is a common dish served to new moms. 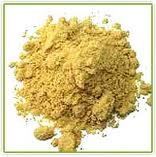 Ginger has been praised throughout the world for its medicinal properties.  Most people are aware of the Chinese reverence and use of ginger as a medicinal spice. It is common in Middle Eastern, and specifically North African cooking. Moroccan cooking would suffer immensely without the use of ginger. Some of the issues that ginger can help with include digestion, constipation and colic in babies.  It has been shown to help with morning sickness and other forms of nausea.  Although inconclusive scientifically ginger is used to help with joint problems and muscle injuries.  Used as a medicine ginger should be taken in small amounts as it can have bloating and heartburn as a side effect.  Like fenugreek and cumin it also can be boiled into a tea.

Nigella seeds also were brought to Morocco from the Indian subcontinent.  They are now domestically grown and harvested for use in traditional medicine and with some dishes. Nigella seeds are found in the hadith and heralded as a cure for everything except death. The seeds are used extensively to cure simple things such as a rash or cold or to use as an anti-inflamatory for joint pain. The seeds are often found in breads or cheeses in the Middle East, but it also can be made into a tea and drank as an elixir.

Native to South Asia turmeric is a member of the ginger family.  To make the yellow powder the root or rhizome of the plant is harvested and dried.  It is then ground to the fine yellow-gold powder known as turmeric. In Moroccan cooking turmeric is often used simply for it’s yellow color.  The distinctive hue is common in chicken tajines. Turmeric is also used as a substitute for the more expensive saffron which might also be used to achieve the color and taste of a great tajine.  One of the most unique uses I have seen for turmeric is its ability to stop bleeding. When the spice is placed over a cut the bleeding will stop almost immediately.  Currently medical trials are being conducted to investigate turmerics’ benefits for Alzheimer’s disease, cancer, arthritis, and other clinical disorders.

These are just some of the spices used in Moroccan food to help with ailments. Walking into a herboisterie one will be confronted with hundreds of jars of ingredients, all that have some medicinal property.  Next time you’re out of your favorite over the counter medication, maybe you’ll want to give one of these natural remedies a try! 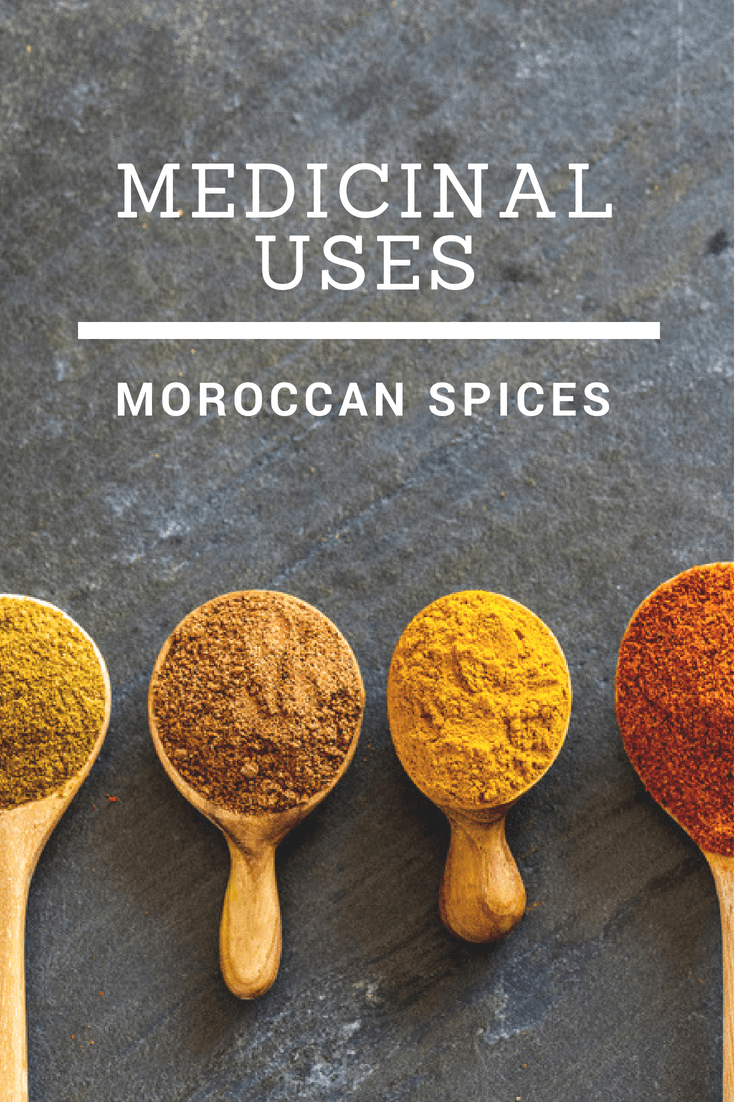 Thanks for the post, I was surprised to learn I have all of them at home! I will be trying out these new ways.

Amanda, where do you purchase your essential oils and what brand are you using? I ask because I have in laws in Marrakech and would like to introduce them to the oils, but I'm leary of poor quality ones that I saw there in December. Thanks so much!

Hi Angela, Right now I use Young Living oils bought in the US. I am searching here to see what I can find and will likely write a post dedicated to anything good that I uncover!

Yesterday I suffered from a stomach bug and my husband told me to drink a glas of water with cumin : amazing that this ancient and close to nature knowledge is still widely known and used in Morocco, that is one of the reasons I adore this country so much !