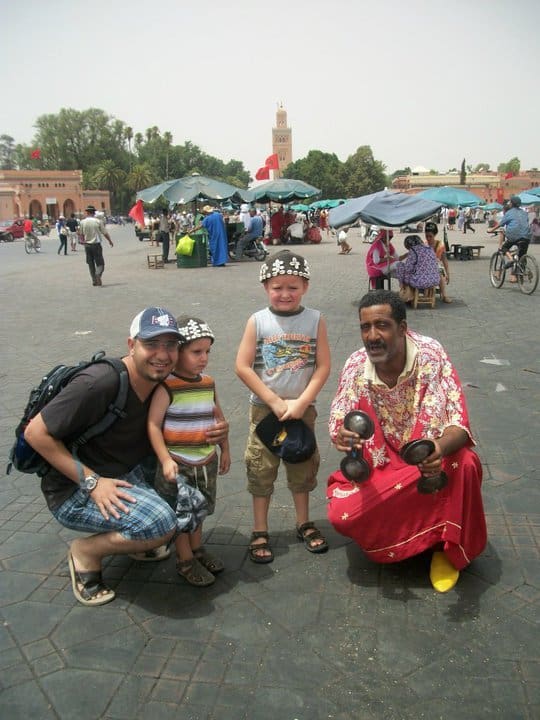 It’s 12:30am and I have terrible insomnia.  While I have spent the last 45 minutes pinning things on Pinterest (which by the way you should totally join me!) it dawned on me that I’ve never shared much about our immigration tale.  One of my goals for this year is to expand beyond recipes and provide much more information about culture, travel and raising bi-cultural kids.

Our immigration story is probably similar to many others who have navigated the bureaucratic backwaters that are the USCIS (formerly known as the INS). However, there’s a whole lot being said in the news right now about immigration reform and I realize that a lot of people have no idea what it’s like to go through the immigration process.

Right now, we’re in the sunny Caribbean enjoying our first vacation as a family where MarocBaba has a blue American passport.  Not only is this piece of paper great in that patriotic kind of way it makes our life 100x easier when traveling.  I really mean it.  But, I’m getting ahead of myself – let’s start at the beginning.

A lot of people think the typical story for an immigrant marrying an American citizen goes a little something like this.

They fall in love.

Boy hops on the next plane to America.

Boy is given American citizenship or at least a shiny “green card” on entry.

Here’s how it really went (and goes for bi-national couples with hopes of immigrating from around the world.)

MarocBaba and I met the day before New Year’s Eve in 2004. We only spent a few days together before I had to leave. Once I was back in the US we continued to talk regularly though there was hesitation on my part, largely due to the volume of comments and assumptions everyone made about his intentions.

“Surely he just wants a green card.  There’s no way you could really meet and fall in love with someone that fast! He’s going to kidnap you!”

I went back to Morocco a few months later and MarocBaba proposed. I accepted and we realized we had to figure out this immigration thing pronto.  Now, before you say “ah ha – he was after the green card” slow down.  We had a lengthy conversation about which country would offer us the best chance of a good life.  We were both very young, I was still in college and job opportunities in Morocco were few and far between.  We wanted a family and felt that living in the US was the best choice. I would have been just as happy to live in Morocco.

When I returned home I began to scour the internet for everything I could find about immigration. I thought we would have to get married before we could start the process but discovered a visa called a K-1 or a fiance visa.  This fit our situation perfectly.  It also would make my family happy, as they would be able to meet MarocBaba before we were married.

I never considered hiring an attorney as well frankly it wasn’t in the budget! Instead I spent a solid week sorting through the forms that we needed to file out, the documents that had to be collected and gathering the proof that we had a genuine relationship – because that’s the real test in this situation.

There were forms that had to be FedEx’d from Morocco and fees, $350 just to file the application.  This is the point in the process where I began to understand why people choose to come to the US through non-legal means.  If I as a well educated, native English speaking, citizen had to spend so much time understanding and properly filling out these forms how in the world would someone who doesn’t speak English or isn’t able to understand all of the procedures to file paperwork correctly?

Finally I mailed our paperwork to the abyss.

You may think that’s an odd word choice but that’s what it is.  Depending on the state you live in your paperwork is sent to a specific processing center.  It then could be forwarded onto ANOTHER center but maybe not.  The thing is, you never really know where it is or what’s going on.  I’ve joked with other girlfriends going through the process that the standard operating procedure for this is;

At this point in the process the clerk is determining if you’ve met all the requirements in the application (which truth be told are few).  Did you submit proof that you’ve met in the last 2 years? Did you fill out the form correctly? Are either of you on any watch lists or FBI most wanted posters?

We made it through this process in about 4 months time.  Our papers then were sent to the State Department. There were some background checks run on MarocBaba and then everything is tucked into a diplomatic pouch (sent via DHL) and flown to Casablanca. Yay – we’re almost there!

At this point we’re creeping up on 6 months since the paperwork was originally filed. Then we heard nothing.  Everyday MarocBaba would check the mail to see if his packet from the consulate had arrived but it didn’t.  I contacted our representative (yay Ron Kind!) and had a congressional inquiry filed as to the status of our case.  Shortly after this was done, our interview date and the miracle packet arrived.

Then it’s off to the doctor.  But not just any doctor.  The US State Department has a list of approved doctors that all visa applicants can go to.  You can’t go to anyone else and in our case none of the choices were in Marrakech. MarocBaba made an appointment with one of the approved doctors, made the trek to Casablanca for the day long ordeal.  A standard physical, some chest x-rays, STD testing and immunizations took the better part of the day and ate up some more money.  All that was left was the visa interview.

Three weeks after the packet showed up it was time for the big day.  I was in Morocco visiting and we took the train to Casablanca for the interview, more cash in hand to pay the visa fee.  Oddly enough I wasn’t allowed to go into the consulate. At 9am, as we were instructed, MarocBaba was waiting in line and I sat across the street in a cafe.

He came out at lunch time but hadn’t had the interview yet.  I was sick to my stomach worrying what was taking so long to get to him. He told me a lot of men were turned away.  I got even more nervous.  He went back after lunch and I sat some more. Finally around 4pm he came out.  They told him to come back the next day to pick up his passport and visa. I was shocked.

We had heard that almost every man applying for a visa ended up in a process known as AP or advanced processing – essentially more background checks.  We weren’t prepared to get the visa right away! After spending the night we went back at the appointed time and sure enough he was given his passport with the visa. We went back to Marrakech with big smiles on our faces.  Though I now realize the moment was bittersweet for him.

I wanted him to come home with me immediately, to buy the tickets and return with me but he wanted a little more time to get his things together and say goodbye to his family. I remember being angry at the time but I realize now I wasn’t being very fair.  I should have given him more time to do what he needed to do.  One week after I arrived home he landed in Minneapolis.  In January.

His first words off the plane, “There’s so much ice….”

There was no immediate citizenship or green card.  There was only a warning “Get married in 90 days or you will be out of status.”

After we were married we had to file to adjust his status.  Guess how much that costs…nearly $1,100.  We were married in April, filed the paperwork right away and it wasn’t until after Thanksgiving that our paperwork had been filed, another interview was conducted – we had to prove our relationship with such things like joint bills, financial accounts, life insurance policies, etc).

I was 8 months pregnant at the interview and was told our pregnancy didn’t count as proof of a relationship.  Just that we had “done the deed.”  Eventually MarocBaba was approved and his temporary green card was sent.

Did I mention that from the time he came in January until he had his green card he couldn’t work, enroll in school or travel outside of the US – not even if he was going to Morocco?  It was a rough year.

One year and nine months after his first green card was granted we applied for his permanent green card.  At the two year nine month mark he would be eligible to apply for US Citizenship but without the permanent green card no application for citizenship could be filed. This form was $595 to file. Though it was a relatively painless part of the process aside from waiting six months for it to be completed.

We had another interview and another round of questions about the validity of our marriage.  Shortly after the card came in the mail we were able to apply for US Citizenship. More paperwork to mine through and another $595 were submitted for this round.  MarocBaba had to study for the naturalization test, which wasn’t terribly difficult and attend another interview with USCIS.

The day of the oath ceremony I swore I was going to burn all of our immigration files.  But I’ve still got them because you just never know!

So the next time someone makes a comment about “foreigners marrying Americans for citizenship,” I hope you’ll remember a little bit of what I shared. Navigating the immigration system is not easy.  It’s not cheap and it doesn’t mean automatic citizenship!

*Note: I shared several pictures in this post so that readers could see the progression over time. My words are my words but hopefully you can see from the images how much time passed between each of the steps in the process! Also note that the timeline and prices for the process were from 2004-2011 (when citizenship was granted), both have changed greatly since then.