How Moving to Morocco is Like a Carnival "Fun" House - MarocMama 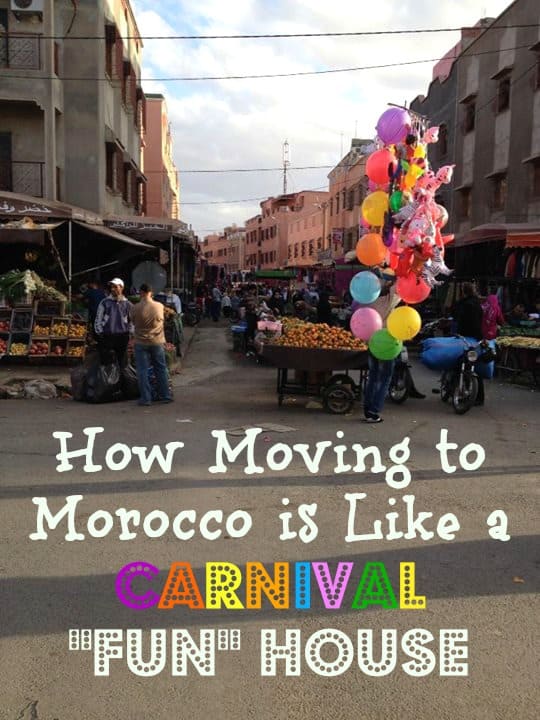 I've been wanting to write this post before we even moved to Morocco and now, almost 5 months after we've moved, I think I can do the topic justice. How I first thought of this was when we were preparing our boxes to be shipped here. While this was going on we had some other legal paperwork that needed to be dealt with before the move, and then some other issues with getting everything ready in our apartment. It felt like every corner we turned there was another surprise. Fun houses really aren't all that fun.

Would it be a giant distortion mirror?

An ugly clown popping out of a dark corner?

Maybe a maze that is impossible to find your way out of unless you go back out the same way you came in?

At one point it felt like it could be anything you can imagine popping up as an obstacle, has happened. Let's go waaaay back to the beginning.

Our oldest son needed a new passport before we moved, and due to some legal paperwork (that we had started in April) we needed to complete, we had to expedite the passport. Time was ticking and a week before we were supposed to leave I got a call from passport services that they needed some additional documentation. I immediately had this sent in and then heard nothing. Four days before we were supposed to leave there was still no word and no passport. We lived about 2 hours from the closest district passport office and needed to know if we should go and supply the information again and push for an overnight passport. I spent several hours on the phone until finally I was able to get through. I was told that everything was fine and that they'd be FedEx'ing the passport overnight. (Yes a federal agency had to use FedEx because the US postal service couldn't get us the passport fast enough – I find this highly ironic). So in the end everything was fine but it came right down to the wire.

The packing of our house and belongings was stressful, as we needed to put things in storage, sell things, decide what was going in the boxes for ocean shipping, and what would go in our suitcases. Everything was done on time and we made it to the airport and onto the plane. We flew from Chicago to New York, then New York to Casablanca before connecting to Marrakech. Our flight from New York was delayed, having us arrive in Casablanca late and missing our connection. Once we got to Marrakech (about 10 hours later than scheduled), of course 4 of our 8 bags were missing. Thankfully they showed up the next day.

We knew that the apartment we would be living in at MarocBaba's mom's was unfurnished, but I guess I had a different idea of what unfurnished meant. It literally had nothing, aside from a bed for each of the kids, a bed for us and a refrigerator. I had not anticipated (or budgeted) for this. So let the buying begin – and it went on and on and on. Now we've only got a few more items to get to finish furnishing the house. Some days I feel like it won't ever end.

If you remember, we had sent our boxes to Morocco at the end of July, expecting them to take 6-8 weeks to arrive, which would have been a few weeks after we arrived. That date came and went and no boxes. Around the 6 week mark I received word from the shipping company that they would be shipping out in the next few days, once we paid our final total. Our initial quote was for 12 – 40 gallon tote boxes at $1200. We only ended up sending 6 – 45 gallon totes. We were told our final total would be sent to us before final shipment occurred, because they needed the actual boxes to charge the right amount.  We paid a 50% deposit, and so anticipated that our total would be about $200-300 more.  We were wrong, it was $700 more. I had told the representative the number of boxes I was sending, and he quoted the price in square feet. When I reviewed the contract I guess I didn't realize this, or looked over it as we had never talked in square footage. We were really shocked but at that point there was nothing we could do. Our things were sitting on a pallet in New Jersey and we were in Morocco. We could have abandoned everything, but they really had us over a barrel, so we forked over the money.

It would be several more weeks until our things arrived. But we weren't through the fun house yet….

A friend of ours had used the same company when they moved to Morocco a few weeks ahead of us, and thankfully walked us through the process they experienced. Morocco charges an import tax on goods, but apparently if you get a certificate from your embassy or consulate that changes your residency to Morocco you don't have to pay it. I'm not sure how it works but I know it did work.  We made an appointment with the US Consulate in Casablanca for the morning we would go to get our boxes and were able to very easily change residency.

Our very long day in Casablanca, not my favorite place but love the architecture.

Visiting the consulate was interesting. I had gone once when MarocBaba went for his visa interview, but I wasn't allowed in. First, the consulate is like a fortress – seriously. You can barely see it behind the planter barricades. There are armed Moroccan police men outside, and secured entrances – really not welcoming. After showing our appointment letters and passports we were allowed to enter the US Citizen entrance. We were met by a metal detector and xray belt and about 5 guards. We were not allowed to bring phones or electronics in, and had to leave them with the guards. No where else in Morocco, would I ever do this because I would be kissing my electronics goodbye, but I assumed that this was a legit operation and I would see them again. MarocBaba has a Nike Fit watch and the guards even wanted to take that because they thought it was some type of USB. This was all in an exterior building from the consulate, but once we were cleared we entered the main consulate. American citizen services were to the left and non-citizen services to the right. Thank God we went left because we were 2 of 4 people there. To the right? 50 people at least, waiting for visa interviews. It was very fast and easy to fill out the paperwork, pay the $50 fee, and get back the residency change. The consular officer made sure to tell us we needed to register online as US Citizens living overseas so they could find us if some unrest or natural disaster happened. She was very adamant about this which was slightly unsettling. The most disappointing part for me? I had waited to go to the bathroom over 2 hours assuming that the bathroom here would be nice, at least up to American standards – I was wrong, it was disgusting and didn't have toilet paper – which is normal in most Moroccan bathrooms but I expected more. Come on Uncle Sam, the least you can do is give me a toilet I can be proud of!

Paper in hand we made our way to the office of the shipping company. This is the “hand off” company, the US company ships items on their ships, to foreign ports where the actual boxes are handled by a partner company. Of course this part wasn't included in the shipping fees, which we didn't realize beforehand. So, we had to pay close to $200 more to release our boxes. This office was in Casablanca proper but no where near the port. Another friend had given us a ride to the office and offered us a ride to the port. It felt like every turn we made was wrong and after more than 30 minutes we finally found the place. She and I waited in the car while MarocBaba sorted things out. I really thought this would be done quickly.

If you try to do anything in Morocco after lunch (so 2:30pmish) it's like pulling teeth. I have no idea why but no one wants to do their job, and will give every reason in the book why you have to come back tomorrow. Tomorrow wasn't going to work. MarocBaba spent close to 2 hours convincing them to get the boxes, sort things out with the customs agent, and arrange a truck to take our things back to Marrakech. After 30 minutes of arguing, he pulled out his American passport, and miraculously things started happening. Advice: in situations like this, it's really sometimes better to use your “foreingn-ness,”because it usually means better treatment. The truck to bring everything was another $100 (so if you're keeping track we've spent about $1600 just on fees related to these boxes at this point). We spent several hours in a small truck with a large Moroccan man who drove so slow I thought we'd never get back. Boy was I glad to unpack my pillows, sheets, and comforters.

Then there was registering the kids for school…

Applying for my residency card….

Buying a car…. (by the way many people have asked about shipping cars. We didn't do this but if you're looking check out this company for shipping quotes).

But those are for another time, and each deserves it's own post, you know just in case you ever decided you want to try moving here too.  As you can see this has been anything but straightforward. There's a lot of trial and error. There's a lot of waiting, anger, and frustration but through it all I've learned some important life lessons.

First, you never know what's going to pop up in front of you, and it will. Be prepared for all scenarios. I felt like I should have run a risk analysis on everything ahead of time.

Lastly, when you move somewhere new, set a budget and than double it. The start up costs to build a new life are more than you probably think.