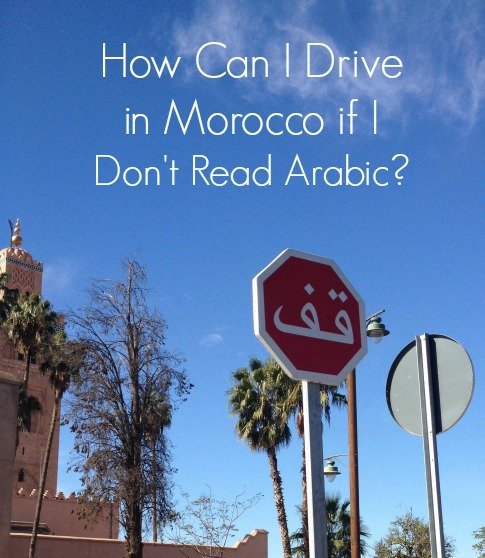 Good question. The truth is I can’t read Arabic (unless you count my ability to read and find the words “Allah” and “Coca-Cola” two words that I see almost with the same regularity here). But Morocco, like Quebec and other bilingual locations has done an excellent job of making signs readable in Arabic and Roman letters. In some cases things are listed in 3, and sometimes 4 languages. All official buildings are now titled in Arabic, French, and Berber. But that still doesn’t really answer the driving question does it?

Morocco, although quite developed- on par with many European countries on many aspects – still struggles with high illiteracy rates among the general population. In urban areas this is not as much a problem as rural areas. That being said what has struck me is that they (the officials in charge) have made clear decisions whether by necessity or choice, to make most everything including driving, possible for someone who can not read. Period.

A stop sign is always going to have the same color and shape.

The color of street lights (red, yellow, green) are the same.

Yield signs are represented by triangles and so on. 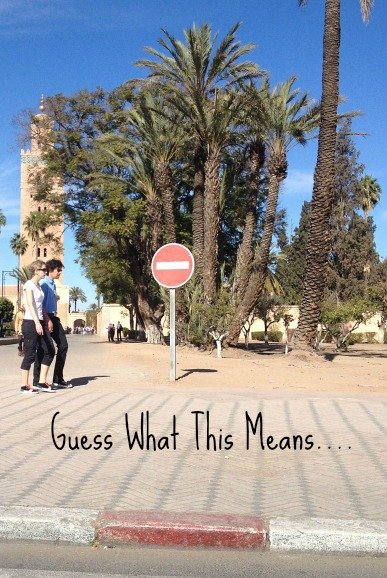 Something a bit different here is that there are no real street name signs, which can be a gigantic, and by gigantic I mean gigantic headache. Instead places are known by landmarks. This is such a reality that if you ask for street names most people have no clue where you’re talking about. Oh and forget about GPS. 9 times out of 10 it’s wrong.

When I first started learning Darija one of our first lessons was on directions, both giving and receiving them. The ability to understand where you’re going is critical. I learned where I live by the name of the neighborhood it’s in, and then the nearby landmarks. If I told someone my actual street name, no idea.

But if you can’t read, isn’t there some bad feelings attached? Shame? I know that for the first time in my life, I am functionally illiterate here – and I am ashamed. I feel very distressed that I can’t read subtitles, the newspaper headlines, or a simple note from children’s teacher. It’s true in other places I may not be able to understand everything in French, or Spanish but I can usually recognize enough to get the gist. I feel completely at a loss here and rely very heavily on my basic French skills. I had a bit of an end to my illiteracy pity party a few weeks ago. One day at the grocery market, I had a young woman ask me if I could tell her the price of an item. At first I wasn’t sure I’d heard correct but MarocBaba confirmed I had, so I proceeded to tell her. She thanked me and that was it. Part of me was a bit blown away that someone who was younger than me and born here, couldn’t read, or even find the numbers on the package. Older men and women also have high illiteracy rates in the country, but they’ve adapted. But younger generations? I really couldn’t believe it. It’s interesting to watch how older people have made their world work without reading or writing. Their grand kids help them read and send text messages and they sometimes develop symbols as a way to keep track of names and information. I used to feel a real sense of pity that they couldn’t pick up and enjoy a book or sit down and write. But they’ve made it work in their own ways and truthfully they tell some amazing stories (the storytelling culture is amazing) and have other types of memories that I only wish I could boast.

This whole transition has gotten me to think a lot about immigrants who move to the United States and can’t read English. How complicated have we made everyday life that we expect everyone to have a high literacy rate to preform basic tasks? I have to say if the same standard were applied here I’d be sunk. I wouldn’t be able to drive. Are there ways that we as literate people could still do our daily tasks with a more simplified system? 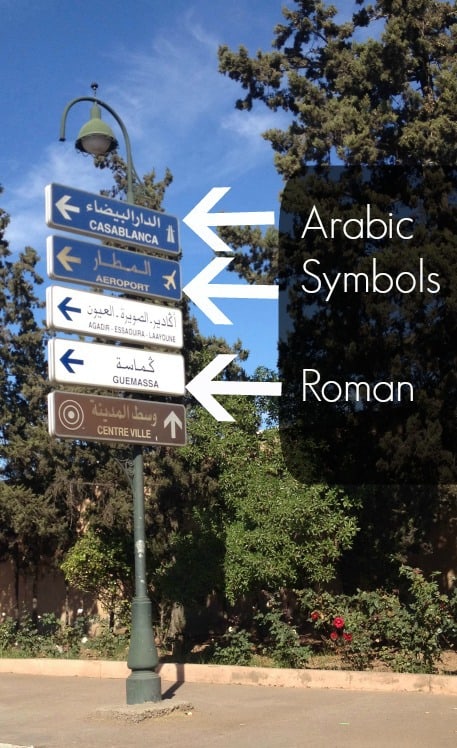 Road Signs are only half the battle. Here are some basic tips if you decide to drive in Morocco:

That’s all I could think of for now but I’ll be sure to update this if I think of others.

Have you tried to drive in a country where you couldn’t read the language?

Was it difficult? Easy?

Chances are you'll need to start from the beginning. There are a lot of driving schools in every city. Find one close to you and ask around to find the best rates offered. They should help you to do the driving requirements and tell you how to sign up and do the written portion.

Thank you for sharing.

This was a really interesting post. Living in North Wales, I'm used to seeing road signs that are in Welsh and English (generally with the Welsh first). Now that I'm more or less fluent in Welsh, I think that I process the information more quickly on the ones that just have text (e.g. temporary signs about road works).

Amanda, you are one tough cookie, because if it were me, I'd never leave the house! And I get lost WITH signs I can read. You're experiences have been amazing and inspiring to follow. You make a good point about how difficult parts of the U.S. make it for immigrants who are learning the language. Most Americans would never survive if the tables were turned.

Thank you Ezzy - you know this is one thing I honestly didn't even think about before we moved. Thankfully I am pretty good with directions and remembering routes so that has been very helpful. But knowing I would struggle to ask for help if I were lost is more intimidating. It's totally changed my outlook about how things are conducted in the US and the unnecessary language barriers we put up.

How hillarious - I could neverrrrrrr do this.

The first few times I was white-knuckled. Now I'm a little more comfortable.