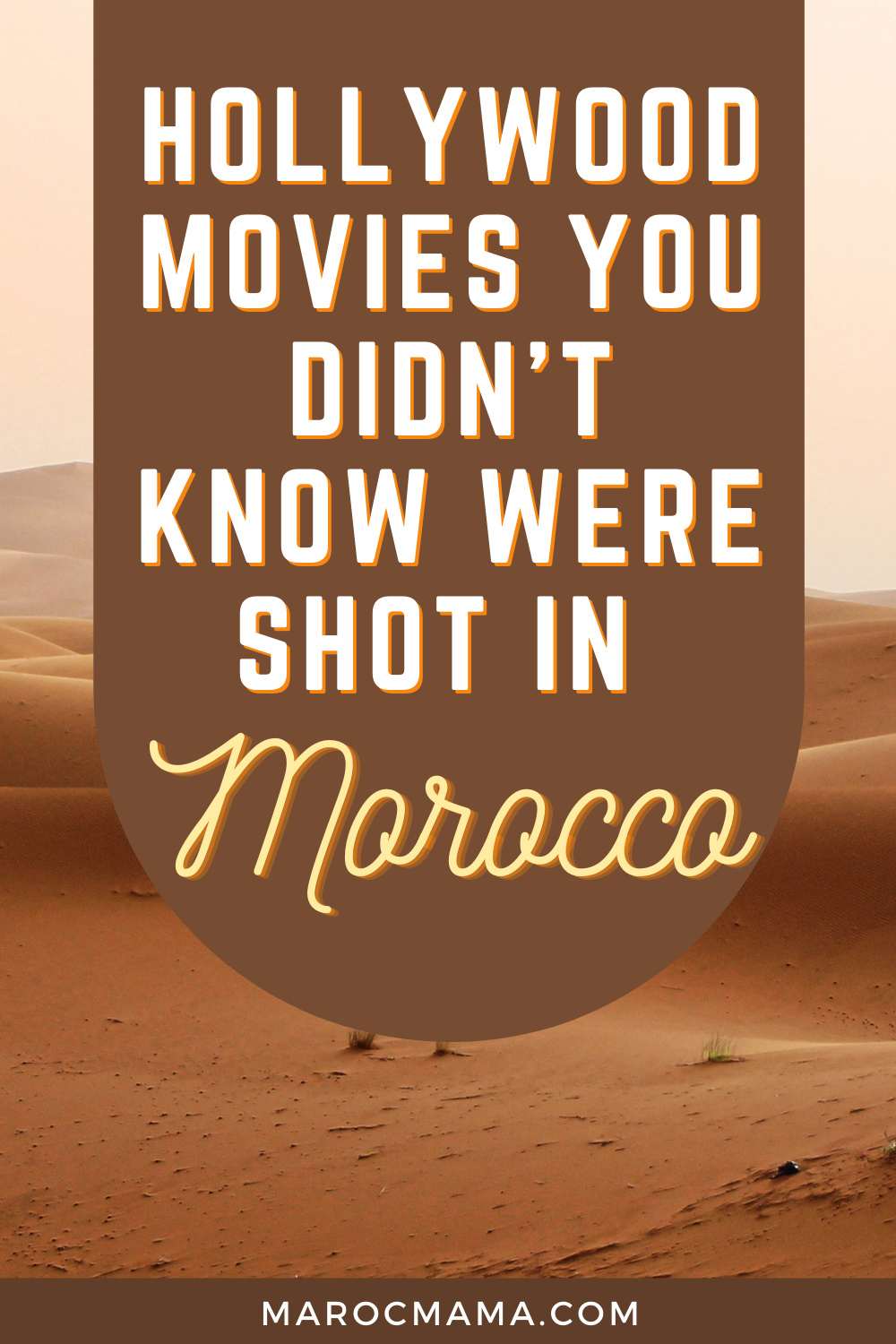 The most famous Hollywood movie shot in Morocco is undoubtedly the 1940’s classic Casablanca. This is just one of many films that would come to tell the stories of the country or use its landscape as the backdrop for films from across the Middle East and North Africa.

Casablanca was not shot at any point in Casablanca, so it is an imagined Casablanca that is portrayed. But some of the more famous movies you might know that feature a desert or Middle Eastern scene(s) have a good chance of having been filmed in Morocco.

Start planning your Moroccan movie night by taking a read through these Hollywood movies shot in Morocco.

One of the most popular film studios outside of Hollywood is in Morocco. There’s a good chance that if you’ve seen a desert movie in the last 10-15 years it was filmed in Morocco. However only a limited few have a part of their storyline that takes place in Morocco. For the rest, the country stands in as a different place.

Alejandro González Iñárritu’s 2006 Best Picture-nominated drama takes place across the globe, but one of its main storylines involves an American couple’s emergency in the Sahara. Ok, so this one you may have known was shot in Morocco as it’s part of the storyline.

While on tour in Morocco, two tourists played by Cate Blanchett and Brad Pitt face sudden peril when Blanchett is struck by a stray bullet. Two local children who fired the round while testing a rifle face just as much danger, since the incident is investigated as terrorism.

This intense 2001 action drama from Ridley Scott concerns the harrowing American battle against Somali rebel forces in Mogadishu in 1993. Sidi Moussa, Morocco, fills in for the capital of Somalia.

The setting itself becomes a character within Black Hawk Down, as the viewer becomes acquainted with the narrow streets and town squares where isolated US troops hunker down.

Winner of the 2000 Academy Award for Best Picture, Ridley Scott’s epic focuses on a Roman general called Maximus, played by Russell Crowe. Betrayed by the new emperor, Maximus is captured and sold as a gladiator. Early scenes of the hero’s captivity, gladiatorial training, and first combat were filmed at studios in Ouarzazate, Morocco.

Clint Eastwood’s 2014 Oscar-winning drama stars Bradley Cooper as Chris Kyle, a prolific military sniper who achieves acclaim in Iraq before struggling to reacclimate to civilian life. The Moroccan capital of Rabat and the town of Sale appear in American Sniper as the Iraqi city Fallujah.

One of the most polarizing films in recent years, Oliver Stone’s 2004 biopic of the Hellenistic conqueror Alexander the Great, starring Colin Farrell, is by turns thrilling and leaden. Although the real Alexander never set foot on Moroccan soil, Stone filmed many of the Hindu Kush sequences in the Atlas Mountains.

Matt Damon’s tortured, globe-trotting spy finds his way to Tangier in the Bourne series’ third entry. En route to unveiling the conspiracy at the heart of his lost identity, Jason Bourne has to contend with a Blackbriar operative in the Moroccan town.

This watershed mind-bending thriller from Christopher Nolan takes place everywhere and nowhere. In it, a dream extraction team – including Leonardo DiCaprio, Elliot Page, Joseph Gordon-Levitt, and Tom Hardy – infiltrates the subconscious to find profitable intelligence. One thrilling chase is set in Mombasa, Kenya, but Nolan actually filmed it in the Old Souk of Tangier.

This 2019 movie from acclaimed screenwriter Matthew Michael Carnahan details a police unit’s campaign to clear ISIS militants from the titular Iraqi city. Unlike many American-made Iraq dramas, this film focuses on Iraqi troops rather than the US military. For the production, Carnahan recreated Mosul in Marrakesh.

This twisty 2001 thriller was directed by Tony Scott and concerns the relationship between two CIA agents, a veteran played by Robert Redford and his protégé Brad Pitt. Two Moroccan locales sub for other international settings: Fint is the Vietnamese jungle, and Casablanca is Beirut.

Undeniably, the most revered Hollywood picture ever filmed in Morocco is Lawrence of Arabia. David Lean’s grand, sweeping 1962 biopic of T.E. Lawrence won Best Picture and catapulted star Peter O’Toole to stardom. Its iconic desert scenes were all staged in Morocco, as was the haunting Tafas massacre sequence.

An atypical vehicle for star Tina Fey, this 2016 true-event-inspired film relates the personal and professional trials of war reporter Kim Baker. Largely set in Afghanistan, the film was mostly shot around Albuquerque. However, many mountain scenes are actually staged in the Atlas Mountains.

In 2019, the Men in Black franchise returned from a hiatus with a new cast, led by Chris Hemsworth and Tessa Thompson. Unlike prior entries, which hewed toward US locations, Men in Black International spanned the globe. In search of an extraterrestrial infiltrator, the MiB crew travel from England to Italy to France.

There’s also an extended stretch in Morocco, specifically the Sahara Desert near Merzouga and in Marrakech itself.

Sex in the City 2

The Sarah Jessica Parker-starring HBO series, and its first movie incarnation, are inextricably linked to New York City. However, the 2010 sequel sees the Manhattan foursome of friends take a lavish vacation to Abu Dhabi. The United Arab Emirates refused production access, so Morocco filled in for the UAE. Highlights include stints at the luxurious Sahara Palace and Amanjena hotels in Marrakesh.

All James Bond pictures have a travelogue aspect, and 2015’s Spectre is no exception. After some wild layovers in Mexico City, Rome, and the Swiss Alps, Daniel Craig’s 007 makes his way to Morocco.

First, he and sidekick Lea Sedoux snoop around a dingy Marrakesh hotel, then they travel to archnemesis Blofeld’s lair on the Oriental Desert Express train, which runs from Oujda and Bouarfa. Christoph Waltz’s baddie conducts business in a compound in Erfoud. Craig faces some gnarly torture there, but he manages to escape a blow up the compound. That conflagration, incidentally, is the largest explosion in film history.