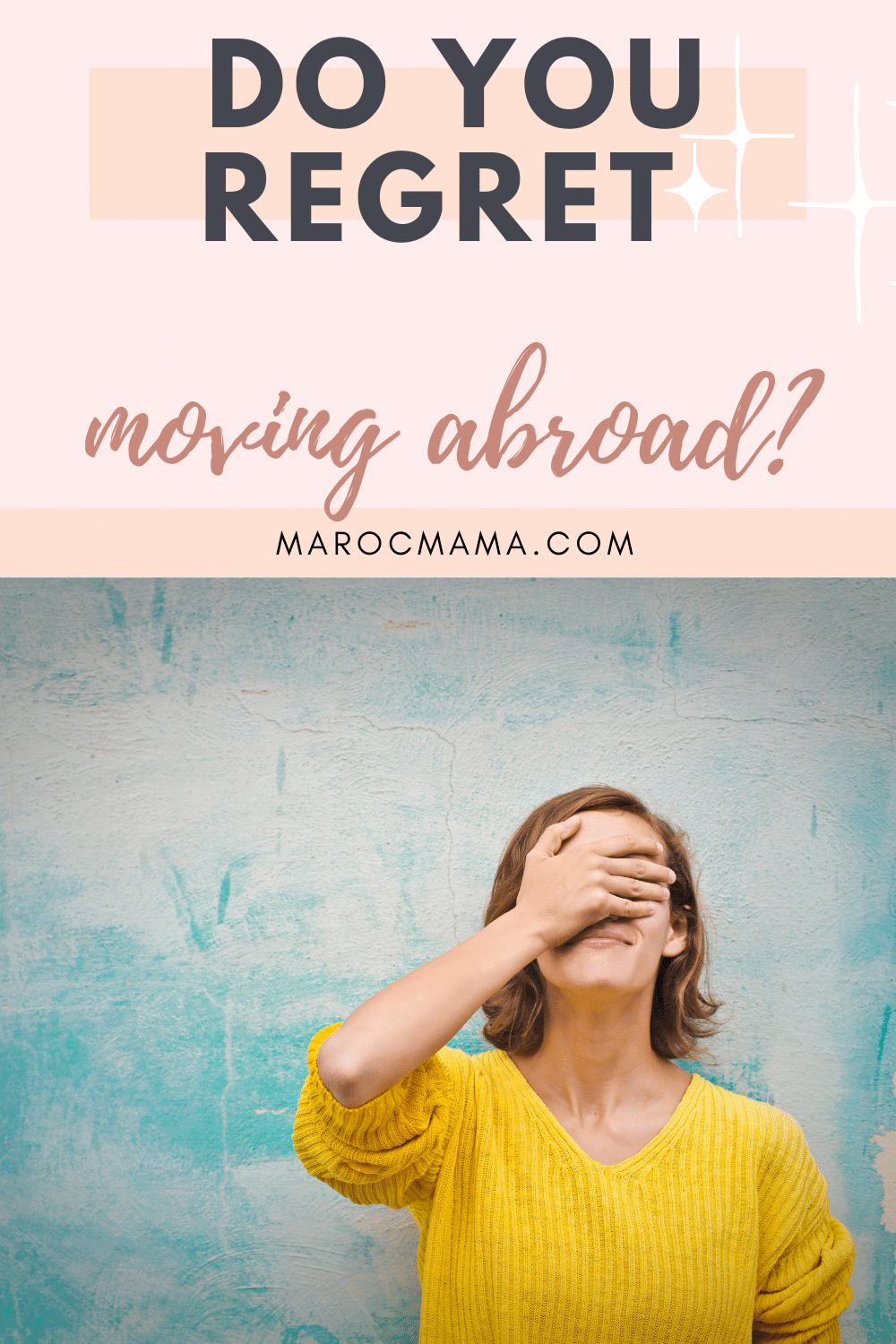 Moving overseas is a big decision to make. There are a wide variety of reasons why people choose to make this life change. However, there are also a lot of people who make the choice and regret it. The regret may happen for a lot of reasons – not all of which are in your control.

The following stories are from other people who have moved overseas and had some regrets. It’s a good idea to keep some of these issues in mind as you explore your own international journey.

I Made Assumptions That Weren’t True

While I don’t regret moving to Norway, I certainly would have done things differently if I could go back in time. Prior to moving, I was more interested in how beautiful Norway was as opposed to the practical information for moving there – such as prices, ease of finding a job, and the visa process. Coming from the United States, I somewhat unknowingly underestimated Norway’s cost of living. I wish I had worked a bit longer and saved up more money for the transatlantic move!

I assumed my native English skills would be in high demand in Norway when it came to a job and failed to account for the fact that Norwegians speak freakishly good English and my ‘assumed asset’ really was not one at all! I also didn’t research the visa process well enough beforehand, leaving me with no choice but to obtain a language visa that didn’t allow me to work at the same time as I studied Norwegian, leaving me penniless in one of the most expensive countries in the world for many months on end! Nevertheless, it was the best experience of my life and I loved it so much that I stayed there for four years before moving on to Germany!

I Regret Not Doing More Research

I certainly don’t regret my decision to leave the US, but have regretted a decision on where to live outside of the US. I’ve lived in 4 places abroad. None of these destinations were bad or wrong, but with one I wish I did more research ahead of time before deciding to live there for three years. We just went with a gut feeling that we liked the city and the surrounding area and went with it.

In the end, we didn’t research the expat community there to see if there would be people similar in age and lifestyle to us. We didn’t research how difficult it would be to learn the local language and to understand the specific local dialect, to communicate in English, or availability of resources to learn. We didn’t think about how difficult it was to get to and from the city for times we wanted to travel, so it became onerous to do quick weekend breaks away. We also didn’t fully research the local political situation, where a drive for independence often exploded into protests, riots, and affected transportation and availability of services.

The US Was Not What I Expected

Unfortunately I regretted moving to the USA. In my situation I didn’t really get a choice in where exactly I would be living in the US and I struggled big time with the location. The winters were awful. On average the temperature would be around -15c/5f and I hated driving in the snow. I was also very rural and felt trapped for most of the year. I was also worse off financially.

Health insurance was 50% of my wage, I only received 2 paid days off a year, due to being so rural phone plans and the internet costs were very expensive, as was the fuel to drive anywhere. Sometimes I wonder if I would have been happier in another state, but the gun culture and lockdown drills would still be present and I really missed my family back home.

Kylie from Between England and Iowa

I Didn’t Consider the Conditions of the Environment

Moving from a small Caribbean Island where air pollution was not something ever discussed, aside from the Sahara dust, this was something very new to me. In my first move to Bogotá, Colombia, I first realised how much of a factor air pollution was in such a major city. Fortunately for me, I lived to the north of the city which was a lot less polluted. However, when I looked towards the center of the city, I could see a brown layer just stagnant above the city. So I did not feel engulfed by the pollution.

However, after this, I moved to Monterrey, Mexico where you could not escape from the pollution as it was trapped between the mountains and usually stays quite consistently throughout the entire city. I feel as though there is no escaping it. Even though I do not live in the city center, I need to clean my driveway once a week as the build-up of dust and pollution is so bad. When I clean it and see the amount that has collected in such a short space of time, it really worries me about my health and how this is affecting my body. This has been my biggest regret since moving and it still worries me…a lot! But this is definitely something to look out for before your next move.

I Never Wanted to Go…

It can be difficult to relocate to a new country, especially when you are not fluent in the language. When my husband was assigned to Yokosuka, Japan, by the US Navy, I was overwhelmed and scared. I went kicking and screaming because I had no other option.

I was intimidated by the language, the transportation system, and the general foreignness of everything. We had to move all of our belongings. We had to rehome our family pets. To say that I was not happy is a huge understatement.

My family and I spent just over two years living in Japan. I spent that time learning about a new culture, exploring the beautiful scenery, and meeting fantastic and warm people. It ended up being one of the best times of my entire life.

Cortney of Tin Can Living

I Regret the Missed Family Moments

I’ve lived abroad for over half my life, my kids have barely lived in my home country and I’m currently living in my 10th city. I should be used to living away, homesickness should be something I’ve got over and saying a good expat goodbye should be a habit I’ve perfected. But lately I’ve been really feeling the distance from our friends and family back home.

We take getting back for granted but it isn’t always possible and I’m not just talking about since the pandemic hit. With family and work commitments here as well as the fact that flight prices can be astronomical especially if they have to be booked at the last minute, I’ve had to miss all sorts of things – from big birthdays to funerals and everything in between. I love living abroad but at some point, I wonder if it won’t be worth it any more.

Emma of Wanderlust and Wet Wipes

I Settled Because of a Relationship

A few years ago I was offered my dream job. I was living in Australia on a working holiday visa that was rapidly coming to an end. Spain was and still is my dream home. I was offered a job with a sponsored work visa in a small town with a family who needed a private teacher for their three kids. I said no because I was dating a boy. Ironically, the boy was Spanish. But he didn’t want to go to Spain. So instead, we moved to Prague together.

A city that had never been on my radar as a place to live but seemed to suit us as we could both work legally. It was a horribly difficult ten months. And I entered that time already having lived abroad for nearly five years in three different locations. I was a pro at that point. But moving there when it wasn’t my first choice, when I hadn’t done research but had ultimately just settled, and moving there with a boy who had told me not to take my dream job, are all things I regret.

Caitlin of The Country Jumper

I Didn’t Research the Weather

While I’ve enjoyed staying in the U.K. and have had a fair share of ups and downs, one of my biggest regrets before moving here was not researching the weather well.

It isn’t a surprise that weather is such a favourite topic to discuss here as you can constantly moan about it since it is always quite dull and most days one will always find it raining here. However, little did I realise how much the weather would affect my productivity and mood once I’d moved here since I’d lived in Asia for most of my life.

Many tend to dismiss the weather easily as being an insignificant factor in comparison to other more critical parts such as the quality of life, economy etc. however, for many, it can cause depression and anxiety and should be factored in when moving to a new destination.

The Paperwork Was a Nightmare

Spain is a wonderful country, and I’ve always loved living there. But living abroad in Spain doesn’t only come with sunshine, fantastic food, and siestas. There are also some drawbacks to consider before moving. The biggest drawback is the Spanish bureaucracy which is a nightmare for every foreigner moving there.

The papers are easy to get in theory, but it might take weeks or even months to receive all necessary documents in real life. The process seems to be super random and depends on the mood of the person attending you. You often need several appointments, a lot of time, and even more patience to go through with all of it.

While, in general, I love my life in Spain, the Spanish red tape brought me several times to the point of considering moving back to my country.