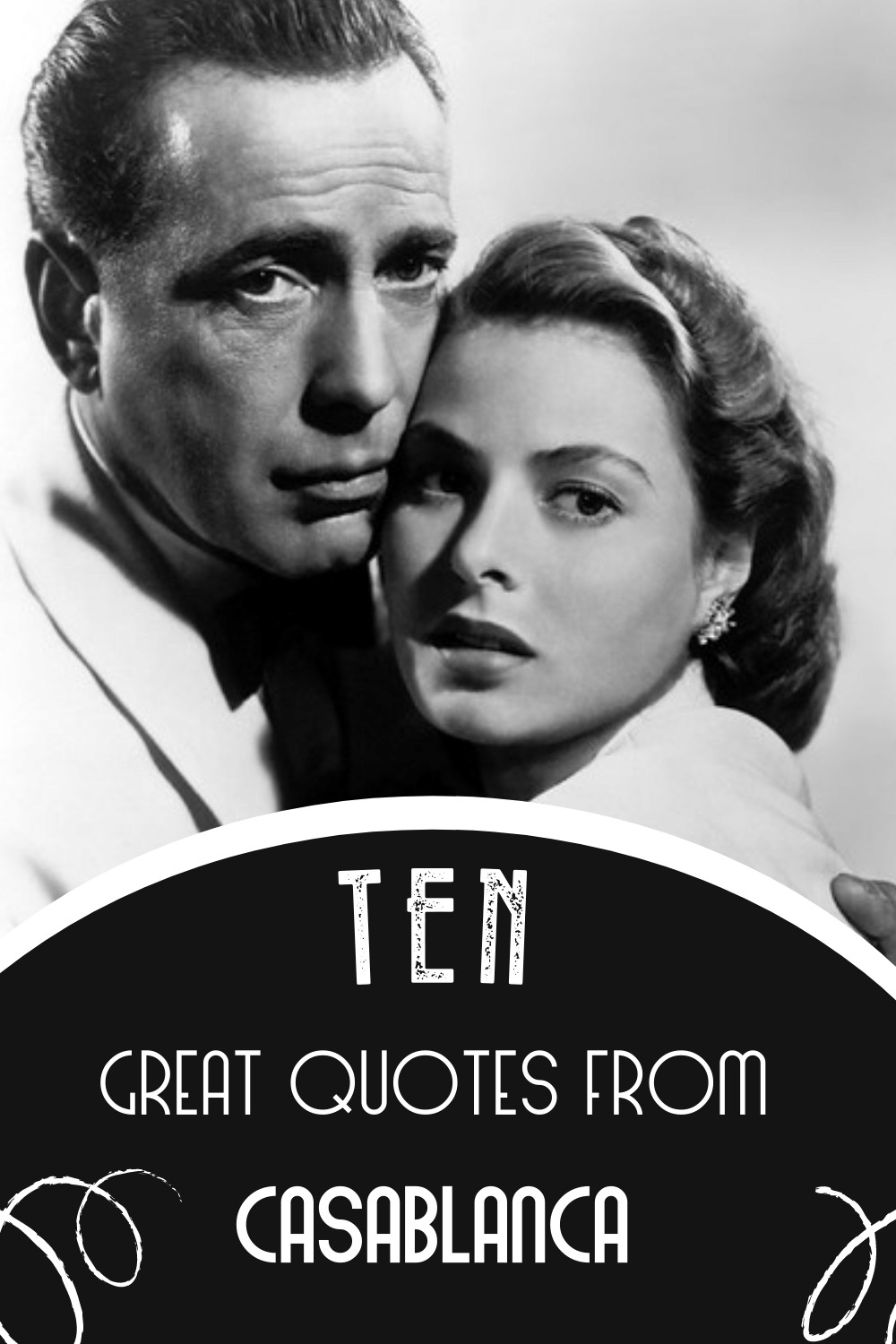 Made in 1942, Casablanca is a well-known film starring Humphrey Bogart and Ingrid Bergman. It’s the classic story of boy meets girl. They fall in love. But it doesn’t work out. Until, one day, she walks into his gin joint in Casablanca, Morocco. Will they live happily ever after? And what about that war that is going on everywhere?

If you are aching to travel to Morocco but haven’t found your way here yet, how about “visiting from home” with a Moroccan movie night. If your movie choice is Casablanca, be sure to keep your ears open for some of those iconic Casablanca movie quotes. Some of them are quite famous and have become so much a part of our language, people sometimes forget where they come from – like “Round up the usual suspects.” And some are so firmly associated with the film that even people who have never seen it know that Mr. Bogart says, “Here’s looking at you, kid”, even if they don’t know why he says it.

Although Casablanca has never been my favorite film, I know that many visitors to Morocco come here with that movie on their mind. They dream of visiting the city of Casablanca and hanging out at Rick’s Cafe (even though the place that exists here now had nothing to do with the movie then – it is simply an intentional replica. But die-hard fans of the movie may love it). While it may not be my favorite movie, I do respect it. The story is layered and complex and at times, funnier than you would expect – and it does have a number of very wonderful quotes.

(Spoiler Alert: If you have never seen Casablanca, you may wish to watch it before reading further, as there will be some spoilers ahead.)

Casablanca is a drama – a tragic story of “unrequited love” – when a man loses the woman he loves – twice.
Set against the backdrop of World War II, the story is that Nazis are hunting for a man (Victor Laszlo) to bring him up on charges as a political enemy. They are hoping to catch him before he finds a way to escape Morocco. If they do, he will very likely die. Rick Blaine, a nightclub owner in Morocco, is in the position to help Mr. Laszlo escape.

The trick is, Victor Laszlo is married to Ilsa Lund – the woman Rick loves. She broke his heart in Paris, which led to him becoming caustic and angry and disconnected from his better self, hiding away in his Casablanca nightclub. She is the last person he ever wants to see again, so when he finds her there at Rick’s Place, it leads him to say one of the most famous Casablanca movie quotes of all:

Rick: Of all the gin joints in all the towns in the world, she walks into mine.

Despite the high level of drama, there are a number of humorous quotes, often involving Louis Renault, a Captain who is a bit too willing to help the Nazis but is also friendly with Rick. He is rather cynical – but amusing.

Rick: And remember, this gun is pointed right at your heart.

Captain Renault: That is my *least* vulnerable spot.

Captain Renault: Oh, please, monsieur. It is a little game we play. They put it on the bill, I tear up the bill. It is very convenient.

Captain Renault: How extravagant you are, throwing away women like that. Someday they may be scarce. (Said to Rick after witnessing Rick’s very cavalier treatment of his most recent female companion.)

Banker: Perhaps if you told him (Rick) I ran the second largest banking house in Amsterdam.

Carl (the head waiter): Second largest? That wouldn’t impress Rick. The leading banker in Amsterdam is now the pastry chef in our kitchen.

Banker: We have something to look forward to.

Captain Renault: Tell me, when we searched the place, where were they? (The Letters of Transit, which ensure safe passage out of the country to anyone who possesses them.)

Captain Renault: [looks at the piano] Serves me right for not being musical.

In Casablanca, Rick and Ilsa never get their “happily ever after”, so it is easy to consider their relationship to be a failed romance. However, if you are one who believes that true romance means loving and treasuring a person for who they truly are (rather than who you want them to be), then Casablanca could arguably be one of the most romantic movies ever made.

Ultimately, while Rick wants to be with Ilsa, he recognizes her love for and dedication to her husband, Victor Laszlo – a heroic figure doing important work to fight the Nazis. Rick makes it clear that he sees and loves Ilsa for who she is when he says:

Rick: Inside of us, we both know you belong with Victor. You’re part of his work, the thing that keeps him going. If that plane leaves the ground and you’re not with him, you’ll regret it. Maybe not today. Maybe not tomorrow, but soon and for the rest of your life.

He lets her know that he never forgot her:

Rick: I remember every detail. The Germans wore gray, you wore blue.

And that he never WILL forget her.

Ultimately, beyond the romance between Rick and Ilsa, Casablanca is about people taking a stand for what is right even when it is scary or hard or causes them pain. Some of the best quotes of the movie reflect this and offer us all a chance to think about how these things relate to our personal lives.

Rick: Ilsa, I’m no good at being noble, but it doesn’t take much to see that the problems of three little people don’t amount to a hill of beans in this crazy world. Someday you’ll understand that.

Victor Laszlo: You might as well question why we breathe. If we stop breathing, we’ll die. If we stop fighting our enemies, the world will die.

These quotes are only a taste of the wonderful quotability of the movie Casablanca. If you choose this classic movie for your own Moroccan movie night, I’d love it if you would share some of your favorite Casablanca movie quotes with me in the comments!

Casablanca the movie is available for streaming on Amazon Prime. It also is available in some countries on Netflix. The book “We’ll Always Have Casablanca” is a really good deep dive into the production and creation of the film.

We here in Morocco miss you. We are thankful every time travel possibilities open up a little bit more and hope the day will come when things will be back to normal and we can enjoy a Marrakech food tour with visitors again. To borrow from Casablanca: Of all the marketplaces in all the towns in the world, we want to see you in ours!