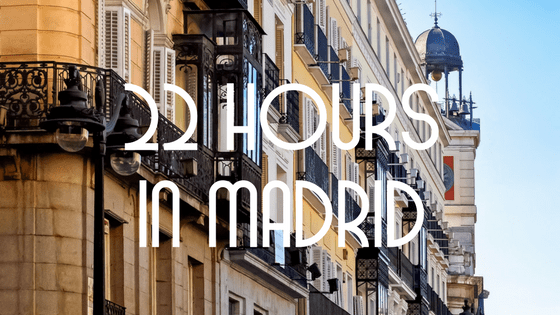 It wasn't long ago that I shared about some health problems I was having.  Don't worry, I've been in the US for a week now have had my gallbladder removed, and am feeling much better! My trip back to the States was quite an adventure.  There are very few flights from Marrakech to the US that do not have an overnight layover.  My flight was no different.  I had a 22 hour layover in Madrid and was torn with how I should spend the time.

he first choice was to spend the night in the airport, camped out on a bench or the floor. Considering I had been in quite a bit of pain and knowing the Barjas airport isn't “sleepover” friendly, I opted for option two – get a hotel.  I've recently started to pay attention to gathering frequent flyer miles, and other rewards programs, and luckily had a $45 credit in Orbucks (Orbitz rewards program) so I was able to score a nice hotel in downtown Madrid for about $35.

MarocBaba encouraged me to spend the night relaxing in the hotel but how could I be in Madrid for the first time and not see some of the city?  More importantly how could I not eat tapas? I think you know what I did.  Earlier in the month I was contacted by Trip4Real  a new platform that connects travelers with locals for unique experiences throughout Spain. I love this concept because there's no better way to experience a place than through someone who lives there. So, knowing I had this layover I got in touch and signed up to take a tapas tour.

This was my very first food tour but certainly not the last! 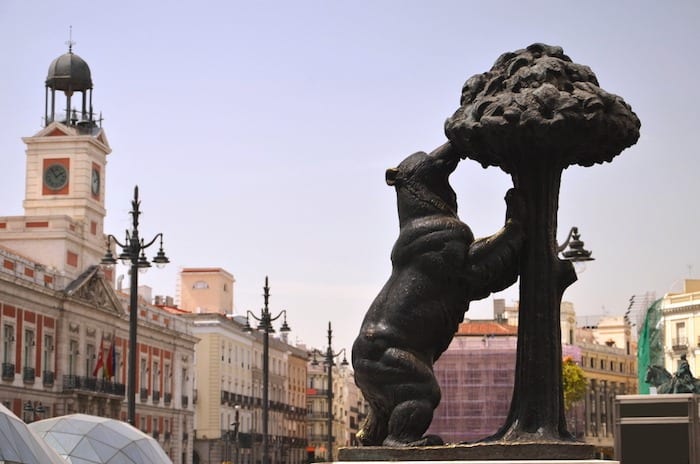 The tour started at Puerta del Sol, which was only a short walk from my hotel. I met up with Luis, my guide and knew it would be a great tour from the beginning.  He was so knowledgeable about Madrid (and Spanish in general) history I loved it! He didn't know I was a total history geek. We walked around old Madrid and stopped several places to try tapas. The first place we stopped was Taberna del Chato where we had “pinchos” which are a type of tapas.  This partridge pate was my favorite but there were some delicious almonds, a type of chicken satay and shrimp. I also had a glass of some very good Spanish grape juice (yes just juice!) that was so tasty.

We continued our tour walking through historic plazas and seeing the monuments of Madrid lit up. Our second stop was by Plaza de Santa Ana to have some fresh mushrooms with butter and herbs and gambas al ajillo or garlic shrimp. The shrimp came out in a dish that was sizzling hot and as soon as they cooled enough to eat I began to shovel them into my mouth. They were small and sweet, so much more flavorful than what can be found in North America.  I've had some pretty good shrimp in Essaouaira but these might have been even better.  I could have sat here and eaten all night long. 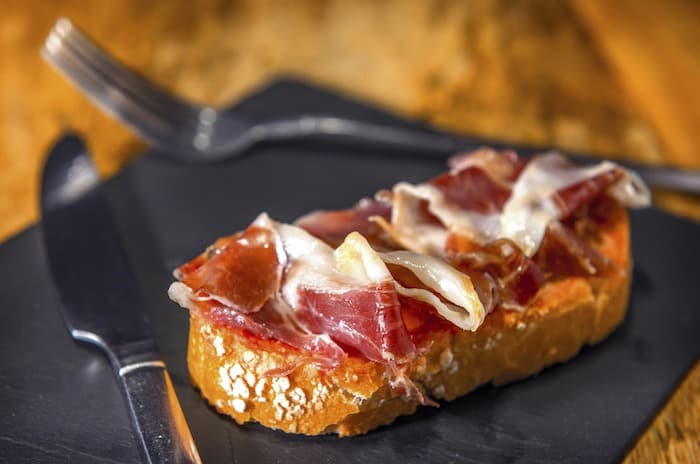 Next it was off to Cantina La Traviesa which was the most enjoyable stop (though really they were all wonderful!).  We spent the most time here and it really made me feel like a local. There were tuna singers too.  What's a tuna you're asking? Tuna's are groups of university students who dress in traditional outfits and sing serenades in restaurants. The tradition began in Spain and Portugal in the 13th century. It was really a treat to listen to them sing while enjoying even more food.

There wasn't anything that we ate that I didn't like but the one dish I loved – flan.  I have eaten flan before but nothing like this one.  It was amazing; I'm still dreaming about having another bite. Unlike the slimy and wet flan often found in the US this was firm and creamy, with vanilla bean, chocolate, and caramel. If we would have started eating with this I don't think I would have made it to anymore stops.

We went for a walk to see some more sights after eating which included a stop at the Spanish Royal Palace and because Luis knew I lived in Marrakech, we also went to see the old walls of the city when it was under Muslim rule.  There was a very lovely Arabesque park near the wall remains.  What really made me fall in love with Madrid was how clean the city was and how they've managed to retain the historical integrity of the buildings through centuries of wars, shifts of power, and economic crisis. This is a city I could see myself as a younger person making home.  I know I can't wait to come back with MarocBaba and the boys. I'm sure they'll love it as much as me.

My advice if you've got a long layover – embrace it.  Get out of the airport and take advantage of whatever you can in the city you're in. Financially, you'll often be better off to go with a flight that includes a long layover.  Even with purchasing a hotel, the price will still be less!