Many people come to Morocco and have a romantic version of what Casablanca must be, thanks to the 1943 movie by the same name. But, the reality is Casablanca at that time and Casablanca’s portrayal in the film was merely a Hollywood construct and has very little to do with history or reality. This disconnect has always really bothered me and really made me want to put together something dispelling the myths about the movie vs. the city as well as sharing what the city really was like in 1942.

What was Casablanca the Movie

The film is set on the eve of American involvement in Morocco. The main character is Rick Blaine an American expat who own’s “Rick’s Cafe,” a haven for refugees escaping Europe and attempting to get visas elsewhere. One night his old flame (Ilsa) and her husband show up seeking such papers. The story evolves with twists and turns. While on the surface it’s an adventure/romance wrapped into one it’s also a study in political allegory. Many believe that the character of Rick is meant to symbolize all Americans and the arrival of Ilsa is a symbol of the bombing of Pearl Harbor. Rick also befriends Captain Renault and the course of their friendship also alludes to Allied alliances of the war.

Many of the characters playing refugees in the film had actually escaped occupied Europe to America. Only Rick and Sam (characters) were born and raised in America. The rest either came for work to the U.S. or as refugees of the Nazis. The US invaded Casablanca as a part of Operation Torch in November of 1942, so film producers pushed the release date forward to try to bank on the current events.

A Few Factual Errors in the Movie

What Really Happened in Casablanca?

Casablanca in the 1940’s was hugely important not only to the country but to the region. It was a major shipping port as well as home to the largest airport in North Africa. It was near Casablanca that the Allied invasion of North Africa began. At the time Morocco was under control of the Vichy French who controlled much of France after Germany’s invasion of the country beginning in June of 1940. Moroccan Jews (a large majority of whom called Casablanca home) didn’t face the same hardships as their European cousins but the Vichy’s did put in place many discriminatory laws and restrictions. Sultan Mohamed V did attempt to prohibit discriminatory laws but at the end of the day he had limited control to exert.

Operation Torch is the name of the battle that was launched to liberate Morocco from the Vichy government and move into southern Italy via the Mediterranean. It was successful almost immediately. The landings in Morocco happened in Fedala, Safi, and Mehdiya-Port Lyautey. Allied forces thought the French wouldn’t fight back at all, but rather surrender immediately. This didn’t happen and there was some fighting that happened. The naval battle for Casablanca occurred after the three original landings.

I have no idea if Patton said that to the Sultan, but he definitely thought it, and once referred to Casablanca as “a city which combines Hollywood and the Bible.”  (Blumenson, The Patton Papers, II, 120.) 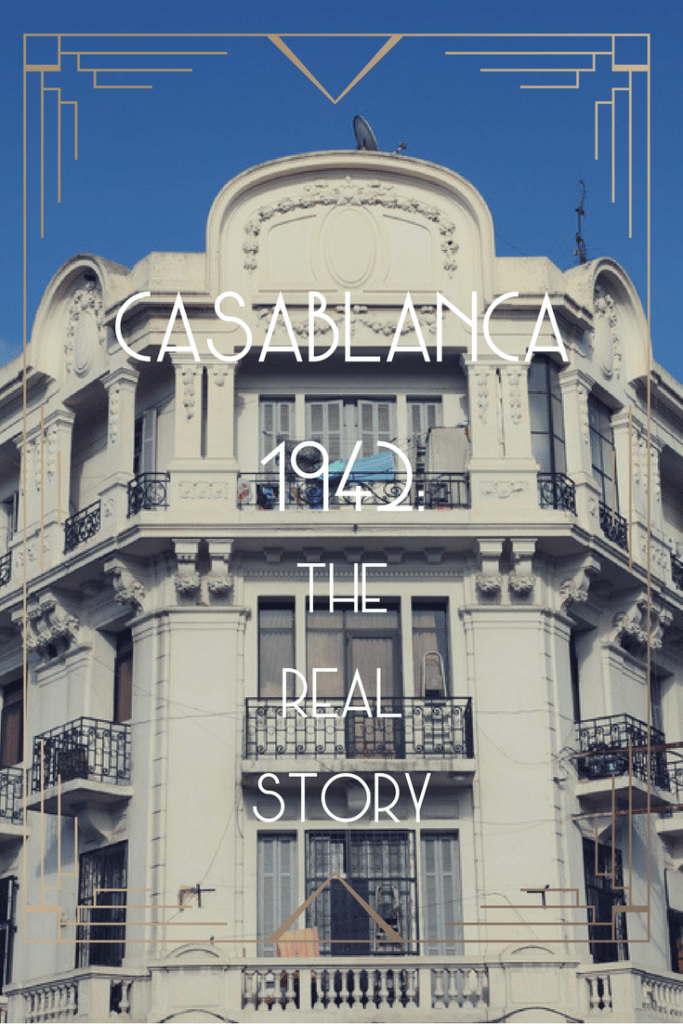 Unlike European countries, Morocco doesn’t have a lot of preserved memorials or sites. But, if you want to see World War Two sites in Morocco today you can!

The romantic notion of Casablanca the movie isn’t quite the reality of Casablanca of 1943 however, the city did play a pivotal role in the war and earned a reputation – perhaps just not for Rick and Ilsa!

While it sounds like Peter Lorre says the Letters of Transit are signed by "General DeGaulle" he apparently was actually saying "General Weygand."

My Spanish Republican Grandfather got the last ship out of Marseilles in November 1942, before Hitler closed the port. He went to Oran, Algeria and from there to Casablanca. I have a postcard he sent to my grandmother from a Hotel Ocean Plage, Casablanca. He spent two weeks there until he managed to board The Nyassa to Vera cruz in Mexico. I would love to know more about his stay there and more about the hotel. His story is similar to the Movie, don´t you think? I´m translating all his letters from Spanish in to English and trying to research his journey. Any help would be gratefully received. Thankyou.

Amazing story - thank you so much for sharing. I'm pretty sure that hotel no longer exists, at least not under that name. Would need a historian to really dig into what happened then and afterwards. Sorry I can't be of more help!

I grew up in Casablanca. My Croatian parents decided to emigrate there while watching the movie :) The movie is indeed not an accurate representation of the place, but the city is noneless mythical and wonderful. I recall listening to WW2 stories told by my old Jewish neighbour :)

[…] Flocks of tourists visit Casablanca every year to find it, and they do find a Rick’s Cafe but it’s a restaurant built in the 1990’s to evoke the movie fame. It’s interesting to watch this movie, knowing a bit of history surrounding the area during that time.  Casablanca was certainly an international city though it’s safe to say English wasn’t the language d’jour. (You can read all about Casablanca in 1942 in this post I wrote). […]

Thank you for taking the time to put this article together. I've watched "Casablanca " many times, and I've often wondered if there was anything factual about the story. I knew a lot of if was pure fantasy; the letters of transit and the Nazi's restraint arresting Lazlo in particular. The real story is just as interesting. I didn't know that Casablanca was the invasion point for Operation Torch.

I wonder what the average American thought when they saw the movie back in 1942. The world was a much bigger place then.

Very true. I'm sure it was just the exoticness of the place and name that was really alluring back then. It's just too bad so many people still think the movie was/is an accurate representation of the place!