Riads in the Marrakech Mellah area 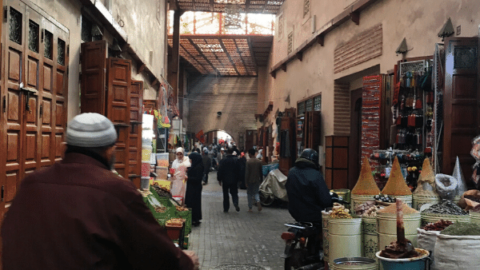 Mellah is the term used to describe Jewish areas of Moroccan cities. Marrakech once had a Jewish population that numbered close to 50,000 people. Today that number sits around 100 people as many immigrated to Israel in the 1960’s.

You can see where the Jewish areas begin by looking at the outside of the buildings. Many Jewish homes had exterior balconies while Muslim homes have balconies that face inwards. When many of the Jewish inhabitants of Morocco left, their homes were either sold or abandoned.

Today, the Mellah has several riads but also is a residential area. Do be aware that some areas of the mellah can be a bit rougher so do be aware of your surroundings.

Where is the Mellah?

The Mellah was the Jewish quarter of Marrakech built close to the palace. There are two stories for why this is; one says it was so the Jewish population could be protected the other says it was so they could be watched. My guess is a little bit of each is true depending on the ruler at the time.

The area considered the Mellah include the back wall of the Badi Palace to the Jewish Cemetery and from the roundabout at Place Ferblantiers down Trek Amiak Mkhanzia to the cemetery.

What else is in the neighborhood?

This is a heavily residential area however you will find a few select historical sites also call it home. Namely the Badi and Bahia Palaces. These two sites represent Moroccan history at different periods; the first in the 16th century and the later built in the early 20th century while still retaining similar Moroccan architectural characteristics.

Stop by and visit the Mellah Marche (or Mellah Market) which is a lively produce and meat market. It’s also home to the last remaining kosher butcher in Marrakech (pictured above). There is an area of the market dedicated to flowers as well so if you need to make a good impression stop by and scoop up some roses that sell for a fraction of the price in Marrakech that they do elsewhere.

You’ll find the spice market is home not only to spices any longer but a variety of goods – it’s a smaller scale version of the souks but is especially known for spices. Across from this is an area that is known for the sale of gold and other precious metals.

This is also the place to go for Jewish history. Visit the Lazama Synagogue though do note it isn’t heavily advertised and there is a guard at the door. The current building is from the 1900’s but a synagogue has existed here in various forms from the time of the Spanish Inquisition. From here you can also visit the Jewish cemetery – that has been in use for 600 years.

Why choose to stay in the Mellah?

If you’re wondering why you would want to stay in this area here are my top three reasons to consider it.

Riads to Choose in the Mellah of Marrkaech

Calm, quiet simplicity is what you’ll find at Riad Alia. The riad features a minimalist design scheme to put you at peace. A lounge room and rooftop terrace are available for guest use and there is WiFi throughout the property.

The name of this riad derives from the family who owned the home from the early 1800’s – the Azoulays a prominent Jewish family in Marrakech. The current Italian owners brought the riad back to life keeping as many of the early materials as possible.

There are five large rooms that overlook the central courtyard. One unique aspect of this riad is the focus on the visual arts and you will find many unique artworks throughout the property.

Enjoy simple decor including a wooden interior balcony and rooftop sunbeds for your stay here. The property has two rooms that can sleep up to four people – a rare find in riads. One of the rooms is a two-bedroom family suite.

They also have a pluge pool and salon area available for guests.

Just around the corner from the Bahia Palace you’ll find this riad. It’s easy to reach by vehicle so you can even take a taxi nearly to the front door. With a calming color scheme you’ll feel at ease as soon as you walk through the door.

Dining is available at the riad and you’ll experience the beauty of Moroccan design with the Italian style and charm of the owner.

This beautiful riad is actually comprised of two homes that are combined but a bridge across one of the alleyways – and can be viewed from the rooftop. The roof itself is a gorgeous space to retreat – there are plants from all over the world spread across the space.

There are 11 guest rooms and suites each with it’s own special touch. It’s also highly encouraged to enjoy at least one meal on-site as their cooking staff is outstanding. Do sign up for one of their cooking courses as well if you love learning new kitchen skills.

Decided this area isn’t for you? Check out our post that breaks down many of the neighborhoods to decide the best place to stay in Marrakech. 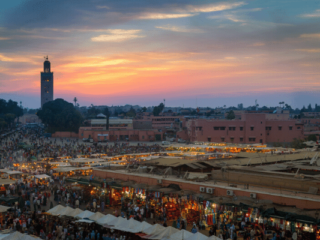