I grew up in a small mining community in the Upper Peninsula of Michigan. There were three major immigrant groups that established the community; English (Cornish), Italian (Sicilian), and Scandinavian. All three of which I claim heritage.

Growing up pasties were as common on our table as a hamburger. Every year there was a school fundraiser where ladies in the community got together and made thousands of pasties. Really thousands. It was quite the feat! It wasn’t until I had traveled away that I realized the Cornish pasty was a unique meal. 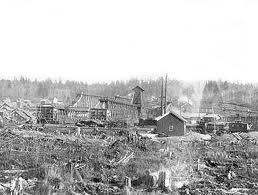 Mining was a major industry and that’s what lead to the abundance of immigrants who came to the area. They brought with them their cultural and culinary traditions.

Pasties were a staple for Cornish miners. The dish is very simple and the story behind its importance in mining is as interesting as the dish itself. Essentially a pasty must have potatoes and onions, other fillings are added based on the person whose eating it and wrapped up in a flaky crust. Cornish wives would make pasties and stamp one end with the initial of the person whose lunch it would be.

Entire Cornish families worked in the mines so it was important to know whose was whose.  The pasty itself keeps warm for long periods of time but in case it did cool down miners would toss it on the end of a shovel and heat it up over a head-lamp candle.

A pasty was always eaten upright without a fork.  Superstitious miners claim that the stamped corner of the pasty should be left behind for the “gremlins” in the mine. This is the same end that miners held onto while eating, and as mines often had high levels of arsenic there may be something more to this superstition. 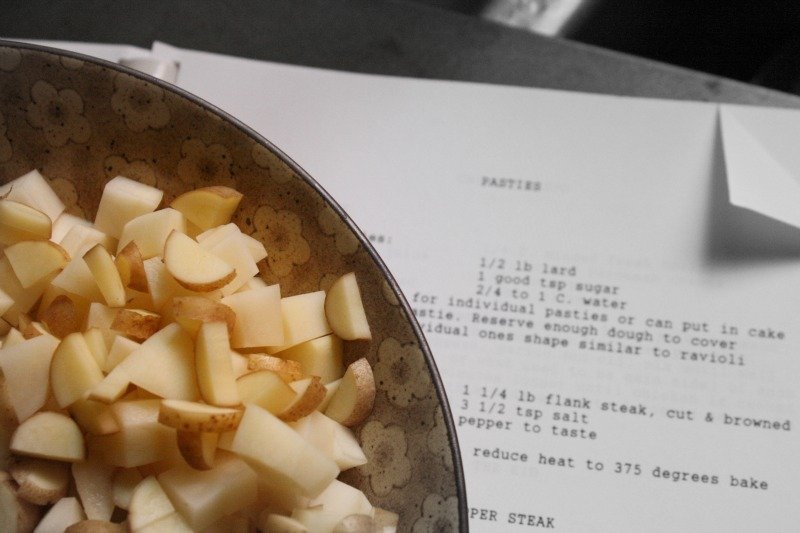 I’ve never had to make pasties because they’ve been readily available for purchase.  The recipes are decades old and frankly why mess with something that tried and true?

MarocBaba had come to really like pasties before his celiac diagnosis and was really sad that he wouldn’t be able to eat them anymore. So when I had to decide what comfort food I would make I took on a gluten-free pasty.

I found my aunt’s Cornish pasty recipe but couldn’t use the directions as they were – lots of lard and beef fat in the recipe.

I made a few changes for this dish but keep in mind this is a basic recipe. Flank steak and rutabaga are another variation.

Traditional Cornish pasty's are made with flour and sometimes lard. This recipe is gluten free and lard free.

Some people prefer to add the meat to the pasties raw. I don't, especially with this version as I've found the longer cooking time needed doesn't work with the dough.

Pasties often come “pre-baked”. To do this bake the pasties at the 425F temperature and remove from the oven. Allow to cool then place into a freezer. Once they have frozen, wrap in plastic wrap and aluminum foil. To reheat place in a 350F oven for 45minutes – 1 hour.

Also, is there a substitute for quinoa flour?

Sorry same as the other question, that's what I used for it. You probably could use an all purpose gluten free flour vs the separate quantities to make this.

What's the total cooking/prep time on these? I'm thinking about making them for dinner tomorrow. Also, how many people would this serve? Would one pasty be enough per person if we had sides?

Hi Katie - I'm so sorry I wrote this post many years ago and I can't remember exactly the cooking and prep time. I believe that these made 4 large pasties.

Hello, I have made this recipe once and was prepared to make it tonight for dinner. I have it bookmarked on my computer and it appears that the actual recipe is missing. Can you please re-share it or tell me how to view it?

Hi - it should be working now - thanks for letting me know there was an issue!

Thank you for this recipe. My mom is gluten free, and I made these for us this week. She loved them.

I just have a few comments about the recipe itself. Mostly formatting to make it easier to understand. For the dough recipe, I would put the ingredients in the order that they are used, moving the butter above the wet ingredients. Also, it mentions 1 cup of water at the end of the ingredients list, but never anything about it in the instructions. Was it supposed to go in the dough as well as the 6-8 Tbsp of cold water? I didn't think it needed it, so I left that out. Also, I wouldn't list the butter in the filling as 1/4 of a stick, I would put it as 2 Tbsp, only because that is the standard way of measuring butter. You might add a suggestion to freeze the butter beforehand to make grating easier. You might also wand to elaborate on the assembly part. It didn't specify how thin to roll out the dough, or about how much should go in each one. I ended up with a lot of filling left over after I had used up all the dough I had.

I don't mean to be critical, but I wanted to point out what confused me about your recipe in order to maybe help someone else out. We did enjoy eating them though. I was glad to find something that my mom would like.

This Gluten Free dough recipe is to die for ! I made 2 different types of Pasties with it & they both were incredible. You can't even tell that it is Gluten Free.

So glad you like it! My husband loves it still ;)