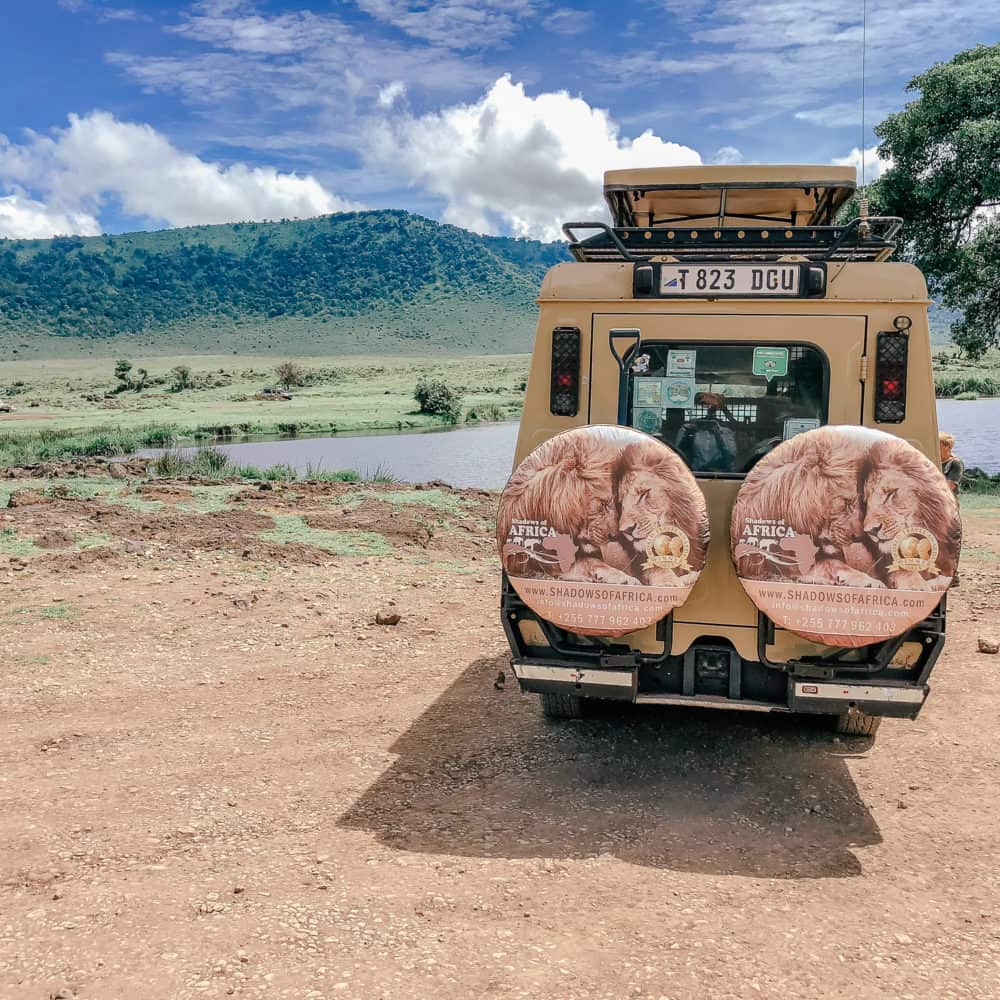 Tanzania was my second safari experience, the first was in Kenya a few years ago with my middle son. With that trip we stayed in one place and did two game drives to the Masai Mara.

This trip would be different and was a combination of Tanzanian cultural experiences as well as safari experiences all spread out across 4 full days.

I will be honest and let you know up front, I struggled when writing this to write it so that someone who has not lived on the African continent or visited a country in Africa can relate. My experience was certainly changed by the fact that I have now spent nearly as much of my adult life on the continent as off.

Every country in Africa is different; and in some cases vastly different. However there are also many things that are not so different and I became acutely aware of that on this trip.

During parts of the trip I felt as comfortable as I am at home in Morocco; whereas my traveling companions didn’t always feel the same. In other cases I was really challenged and even grappled with the effects tourism can have on local populations.

My journey began when I arrived at Kilimanjaro Airport.

My Tanzania experience was done in conjunction with Shadows of Africa; and our first night was spent at their Arusha headquarters and hotel. After a long trip from Marrakech to Barcelona to Doha and finally to Tanzania Olerai Lodge was a sight for sore eyes. My room was great to relax and spend the night and after an early dinner I was out like a light!

For those concerned about mosquitos and malaria in East Africa – which is a concern – all of the places we stayed had netting and I personally had no bites, but a few in my group did get bites – it’s hit or miss! I also had gotten a yellow fever vaccine when we went to Kenya but wasn’t asked for proof of this when entering Tanzania.

The next morning we met with the Shadows of Africa team to go through our schedule for the next several days and get ready. We would be covering a lot of ground and having a wide variety of experiences. I think we were all ready to hit the road!

This national park was our first stop and we were here after about an hour drive from the first hotel. We were really lucky because even though it was the rainy season we never got rained on AND everything was green and gorgeous.

If you love elephants than you’ll love this park because there were so many! We also saw warthogs, a giraffe in the distance, gazelle and these adorable little guys called dik diks (a type of deer) that make you just want to put one in your pocket and carry around!

One of the things that consistently impressed me during our tours was the meals that were provided by Shadows of Africa. While other groups we saw had sad sandwiches and boxed lunches we had a hot meal! This was our lunch one day with a chicken curry, rice, pasta salad, bread and fresh fruit. We also always had water, juice and snacks in the car.

Given that we did spend a lot of time in the vehicle either driving to our destinations or on safari food was always welcome!

When the clouds started rolling in it was time to move on to our hotel for the night on the Lake Manyara and seriously one of the most stunning sunsets I’ve ever seen!

Who wouldn’t want to sit out here and watch that for as long as possible? The hotel also employs local Masai that work as night guards (because yes there are wild animals) and who did a traditional dance in the evening. We all were taught how too but let’s just say I’m not becoming a dancer anytime soon.

The Escarpment Luxury Lodge was a dream come true and possibly my most favorite place we stayed on this trip. Not only were the rooms lovely but I had a great steak dinner with local paratha bread – seriously so good!

I think one of the best parts of this trip was that we actually did have time to relax and enjoy some beautiful hotels in the country. Safari culture also has the concept of sundowners which are drinks at sunset but when you don’t drink (like me) it’s a little less of a “thing!” Suffice to say I opted for a hot shower and early bed most nights!

The next day we left after breakfast to visit a local Masai community. We were able to tour their community and learn a little more about their traditions. The day we arrived was actually a big day because they had elected a new leader and tribe members from all over were coming to celebrate.

Part of this celebration meant that they were cooking meat for everyone. The Masai diet is VERY heavily meat based. We learned that men and women do not eat together and even some cases food is prepared separately. We were invited by them to try some of the goat and while I wouldn’t go for it every day it was a unique experience to share.

Acacia Lodge was incredibly welcoming and ideal for spending a longer afternoon and getting an early nights rest – we’d need it for the next day! I was impressed by their gorgeous organic garden full of produce AND they grow their own coffee beans on site. Not only a great place to stay but really cool to be surrounded by all the products we ate.

For dinner this night I asked if it would be possible to have an all Tanzanian meal as most of our dinners were more western meals. The chef happily obliged and this was my favorite dinner on the trip. We had two kinds of rice, a chicken curry, local greens (sorry I forgot the name), ugali which is a type of steamed corn cake, and a grilled fish from Lake Victoria with some amazing seasoning. So worth it!

The next morning we left REALLY early for the Ngorongoro Crater. The park opens at 6am and we wanted to be there right away to avoid crowds. Also many of the animals like the lions hunt in the early hours before it gets too hot so going early means a better chance to see them.

When I tell you this was a highlight of the trip, I’m not kidding – and I’m really not even an animal lover. The crater is a 3200 square meter conservation area that is one of UNESCO world heritage sites. It was created from a volcanic eruption that subsequently fell in on itself some 2 million years ago.

About 60,000 Masai live in the conservation area which is closed from 6pm to 6am daily mostly to protect the animals from poachers; however they are free to come and go as they like. Giraffes are the only animals of this region that don’t live in the crater because of its steep ascent. The park is home to 30 black rhinos and we saw a few, which is pretty rare we were told.

When they say this is like the Garden of Eden, they’re not kidding. Everywhere we went there were new things to see. The lions were especially cool to see and at one point there was a male lion rubbing against our jeep! The elephant above also walked right in front of us and it was one of the most beautiful and also slightly terrifying things I’ve seen!

What surprised me the most about visiting this park was the quality of the facilities. We stopped at one of the restrooms and not only was it clean but also stocked with toilet paper. For lunch and breakfast we ate at picnic areas that were simple but great for our purposes as well as feeling very safe.

The final day of our trip we were scheduled to visit two tribes that live fairly remotely. It was a 90 minute drive the previous night from the crater to our hotel on Lake Eyasi. This was also the most uncomfortable part of the trip for me.

Not only were we remote – we were really remote. Let me clarify that I don’t mean this is in a negative way, simply pointing it out. The first tribe we visited was the Hadzabe tribe.

This tribe truly lives as bush people. They don’t own property and live hand to mouth on the food they’re able to kill or forage. We went for a walk with them while they hunted and the aim they have with a bow and arrow is amazing. Luckily for us they didn’t shoot anything while we were with but they did show us how they forage for honey.

It really was amazing to see how they’re able to retrieve this without breaking the nest and the honey was really very good. While it was very interesting to see how people live this way still I have to admit I didn’t feel very welcome, which may just come down to cultural differences.

From here it was on to the next tribe, the Datoga where the experience was very different. As soon as we arrived I felt welcome and the women brought us into their home to show us how they grind maize by hand with two heavy stones. They also were really happy share other aspects of their life with us.

This tribe is known as blacksmiths because of their brasswork for jewelry and weapons like spear tips and knives. They trade with the Hadzabe for meat and the relationship works well for both people. Instead of trading meat we traded money for bracelets instead.

One really interesting part of this culture was the skirts the women were wearing. When a woman gets married her parents give her, her first fringed skirt. She never takes it off and when it does start to fall apart the new one goes under the old one which is then removed.

When our visit was done it was back to Arusha where we were greeted with views of Mount Kilimanjaro – our first as when we arrived it was not visible because of the weather.

My Final Thoughts on this Tanzanian Safari

Doing a second safari solidified to me that doing at least one safari is something everyone should try to do. Often it’s thought to be too cost prohibitive – just the flights. However, I’ve seen great deals lately from the US that can get you to Tanzania for under $800 and some I’ve seen in the $500 range.

I can also recommend raveling with Shadows of Africa. Our driver was really great and I found the trip was well organized. The vehicle itself was also good. It was comfortable with plenty of drinking water whenever we needed it. They have chargers in the car too in case your batteries get low. A highlight for me were the hot meals that were provided along with the lovely accommodations.

I’d also suggest keeping your itinerary a bit slower based to enjoy these places. I know lots of people who do a whirlwind tour and try to go everywhere and see everything in a very short period of time and I think this really skews your view of a place.