If you didn’t see my post about snorkeling with whale sharks in the Maldives, you need to go back and watch that video first.

Go ahead, I’ll wait right here for you.

Now that we’re all on the same page I’m going to tell you the entire story.

I don’t know when it all started, or even why but sometime in the last ten years I developed a VERY BIG phobia of deep, dark water. More specifically the things that lurk in the water. Fish. Seaweed. Things that we don’t even know about – you get the picture. So I avoided lakes, rivers, and other less friendly water. I had no issue putting my feet in the ocean or riding in boats, but don’t ask me to jump in and take a swim.

I don’t hate water, and I’m a very strong swimmer even though that’s what people assume my hesitation is about. I just don’t like the things IN the water. But, I’m trying to get over it. I recognize that it holds me back. While my kids are swimming and playing in the water they know mom is not going to go in. I kind of hate that. When K and I went to Kenya this fall I knew I was going to have to get in the water when he begged me to go snorkeling. Since I was the only playmate, he couldn’t go alone, and he had been such a good kid I had to do it. I think when you’re a parent you have this power to summon up courage and face something you’re really scared of just to put on a brave face for your kids.

So we went snorkeling. But the water was clear, the fish were small, and it was very shallow – meaning no big creatures could be lurking about. Yay, I did it!

Before we went to the Maldives I knew that swimming with whale sharks was a special offering Centara offered guests. Cool, right? Before we even left I started to prepare myself. I was going to do this {maybe} and it might help me begin to get over this fear. The day came and we were geared up to go in. I spent the three previous days snorkeling off our villa but the water again was shallow and the fish were small. I once made it to the edge of the reef and panicked and beelined back to the steps as fast as I could. This time there would be nowhere to swim back to.

On the ride out I wavered between excitement and fear. Maybe we wouldn’t find any whale sharks and then we could go back and I wouldn’t even have to face this. I could always back out right? Then it happened.

Before we knew it everyone was getting their gear on to get in the water. The staff told us when we got there we should get in as soon as possible or we might miss the chance. I told MarocBaba that he should go in first and then I would come in. He promised to stay with me. The time arrived and he jumped in. I was ready to go next and then they stopped me. The boat was going to move a bit. Wait, what? I stood back and was waiting for MarocBaba to catch up and then I felt myself being picked up and put into the water. I screamed for MarocBaba. I froze in place with terror filling my face.

I was in the water.

It was down there somewhere near me.

But soon I saw him frantically swimming to reach me and when he got there he grabbed me as tears filled my eyes. “I’m taking you back to the boat,” he yelled at me. I later realized he had no clue what to do with me in that state and just wanted me to stop crying. I said no, just let me look and then we’ll go back. So I held my breath and put my face in the water.

It was RIGHT there!

You know how animals can sense when someone doesn’t like them and then they target that person to become their new BFF? Yea, this whale shark totally knew I was not excited about being near it. It kept swimming right towards me. A five meter long whale shark is not my friend. I spent all the time in the water swimming away from the thing. After about fifteen minutes I had maxed out my ability to stave off a panic attack and went back to the boat.

I don’t know how much of my fear has gone away. The thought of getting in the water again sends shivers up my spine and my heart beat a little faster. But, I’m determined not to let it stop me either. 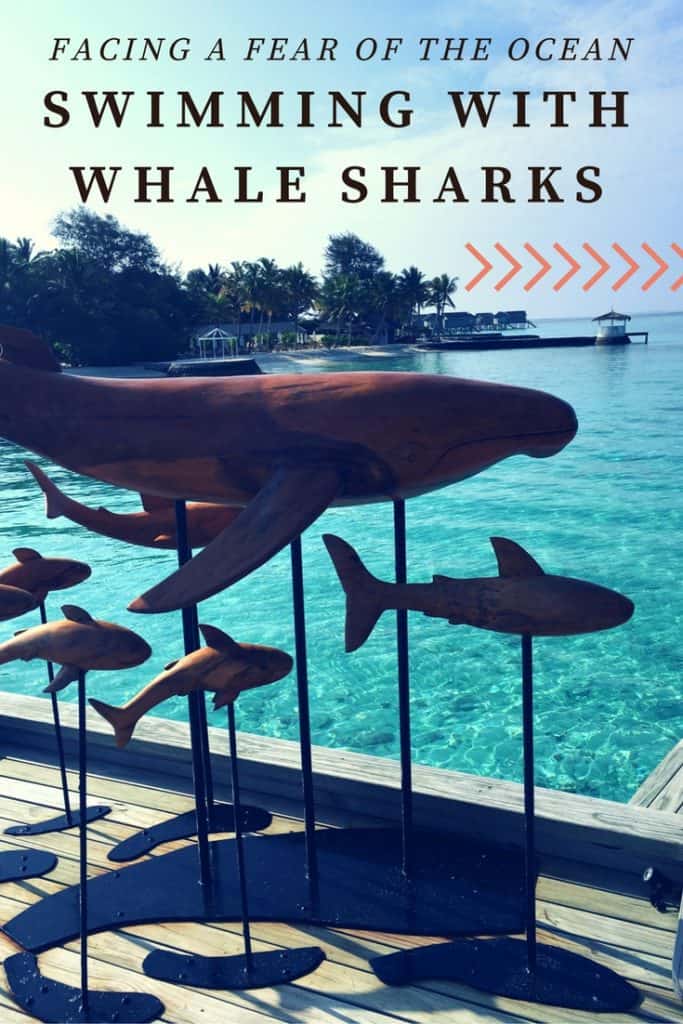 Do you have a fear that slows you down? I’d love to hear about it!

Our stay at Centara Ras Fushi and Centara Grand was sponsored by the hotel. All opinions and experiences are my own.

What to Wear in Morocco: The Beach - MarocMama

[…] you’re like me, usually unwilling to dip anything past my toes in the deep blue (I just recently faced my fear of the ocean), the beaches of Morocco are the perfect spot in to devour your newest book or log a few words in […]

Wait - what/who picked you up and put you in the water?? And awesome, whalesharks are amazing! Mind you, I don't share that fear of yours, I get excited for sharks, Nemos and all the stuff that is lurking. But I love the fact that your fear is not stopping you!!

One of the dive instructors did!